Abstract: in this post we describe the application of the DIY Raman spectrometer to the study of the vibrations of the water molecule.

In this article we describe the application of the Raman spectroscopy technique to the study of the water molecule. Water is a chemical compound with the molecular formula H2O, in which the two hydrogen atoms are bonded to the oxygen atom with a polar covalent bond. Under normal temperature and pressure conditions it appears as a two-phase system, consisting of a colorless liquid (which is called “water” in the strict sense) and a colorless vapor (called water vapor). It occurs in a solid state (called ice) when the temperature is equal to or lower than the freezing temperature.

An important characteristic of water is given by the polarity of its molecule, with a molecular dipole moment of 1.847 D. The shape of the water molecule is similar to a tetrahedron with the oxygen atom in the center, two hydrogen atoms at two vertices and two unshared electron doublets (lone pairs) to the other two. The latter, due to the electrostatic repulsion, slightly distort the tetrahedral structure, causing the angle formed by the two O-H bonds to be 104.45°, less than the 109.5° of a regular tetrahedron. Electrons are more attracted to the oxygen atom, this being more electronegative than hydrogen, therefore the bonds formed between the H atoms and the O atom are called “polar covalents”, as they have a partial charge negative at the oxygen atom (2 δ–), and a partial positive charge at the hydrogen atoms (δ–).

In the liquid state, the continuous formation and breaking of hydrogen bonds gives rise to very large fluctuating aggregates (called “domains”) (of the order of tens of molecules), due to the fact that the formation of a hydrogen bond (H-bond ) between two molecules induces the formation of another, triggering a sort of chain reaction. Each domain has a structure similar of ice; according to an American research, at temperatures between 0 and 100 °C and atmospheric pressure, each molecule of water is surrounded on average by 4.7 other molecules and the distance between two oxygen atoms of adjacent molecules is about 3 Å, thus making it very short-range interactions are influential. In particular, each water molecule establishes, under the aforementioned conditions, about 1.35 hydrogen bonds with neighboring water molecules. The existence of these domains gives water a high degree of structuring, which determines many peculiar characteristics (from Wikipedia).

In the gaseous phase, the water molecule has two vibration modes: symmetrical and antisymmetric with frequencies of 3657 cm-1 and 3756 cm-1 respectively, as shown in Fig. 1. However, in water in the condensed phase, the network of hydrogen bonds that are established between neighboring molecules breaks the symmetry and leads to qualitatively different vibrations. The Raman spectra of the O-H bond show more complex bands. The Raman spectrum of the stretching vibration band of the O-H bond has a bimodal structure with two peaks centered at approximately 3400 cm-1 and 3250 cm-1 and an FWHM width of approximately 425 cm-1. The substantial broadening of several hundred wavelengths seen in the Raman spectrum is a direct consequence of the very high sensitivity from the molecular environment of the stretching vibration of the O-H bond. 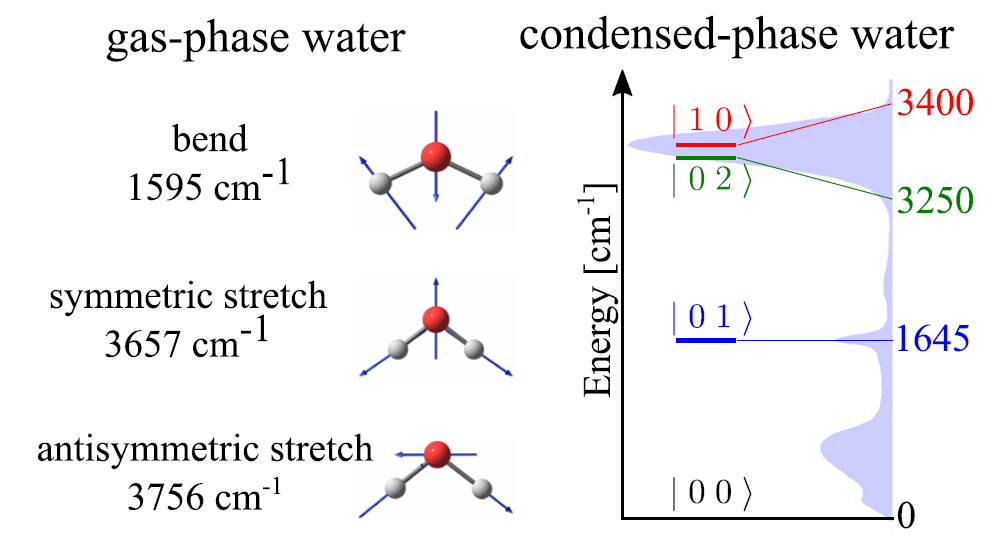 The Raman spectrum obtained by our instrument, shown in Fig. 2, shows the vibration bands at approximately 3400 and 3250 cm-1 as predicted by the reference data available in the literature. The maximum corresponding to the bending mode at a frequency of about 1650 cm-1 is also evident.

The band at 3250 – 3400 cm-1 can be approximated as the sum of a number of Gaussian curves. Fig. 3 shows the approximation we obtain using three Gaussian curves: two of these correspond to the symmetrical and asymmetric vibrations; however, there is a further curve centered at higher frequencies which makes a fairly evident contribution to the overall profile of the band.

With our instrument we have acquired the Raman spectrum of water in the solid state, that is, of ice. The result, quite interesting, is shown in the graph of Fig. 4. It can be seen how the vibration band of solid water substantially overlaps that of liquid water with some significant differences. The fact that there is substantial overlap between the two bands means that the molecular configuration of water in the liquid state, at least in the short range, is the same of water in the solid state. The structure of the hydrogen bonds is practically the same in both cases. The differences between the two configurations are reflected in the shape of the solid water band which, compared to liquid water, has a pronounced maximum at about 3200 cm-1.

The comparison between the Raman spectrum of normal water and the Raman spectrum of heavy water (deuterium oxide) allows us to easily verify the harmonic oscillator-based model of molecular vibrations. For a diatomic harmonic oscillator the vibration frequency depends on the mass of the atoms and the bond strength according to the following relationship:

Where ω is the pulsation of the vibration (ω = 2πf), k is the constant that describes the binding force and μ is the reduced mass of the system. From the relationship described above, but also from intuitive considerations, it is understood that heavy atoms vibrate at low frequencies and therefore show a small Raman shift, light atoms instead vibrate at higher frequencies and therefore produce a larger Raman shift. Knowing that for hydrogen mH= 1 while for oxygen mO = 16 (uma: atomic mass unit), the reduced mass for the pair of atoms O-H is:

While for deuterium oxide the reduced mass of the pair of atoms O-D is:

Since the strength of the O-H bond is the same of the O-D bond, we can calculate the vibration frequency of the deuterium oxide molecule starting from water molecule and taking into account the ratio between the reduced masses. We replace the μD value in the formula that gives us the pulsation of the vibration:

The calculated values ​​are in good agreement with the measurements shown in the spectrum of Fig. 5.

With our apparatus we have acquired the Raman spectrum of hydrogen peroxide (35% solution in water), shown in Fig. 7. The main characteristic of the spectrum is the presence of a Raman frequency at about 900 cm-1. The low value of the frequency suggests that it derives from the vibration of the oxygen atoms, and as such can be compared with the vibration frequency of molecular oxygen O2 equal to 1552 cm-1. The large difference between the two values ​​is indicative of the fact that the oxygen atoms in the molecules of hydrogen peroxide (H2O2) and oxygen (O2) are bonded differently. In the Raman spectrum there is also the 3200-3400 cm-1 band typical of the O-H bond.

An aqueous solution of NaCl was also examined with the Raman spectrometer. The spectrum is shown in Fig. 8. The presence of the solute, in the form of ions, in the environment surrounding the water molecule, has the effect of deforming the vibration frequency band of the OH bond, increasing the intensity of the maximum at 3400 cm-1.

The application of the Raman spectroscopy, even with our DIY apparatus, has allowed us to study in depth the vibrations of the water molecule.