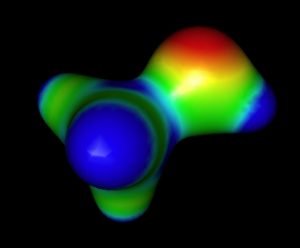 Abstract: in this post we are going to describe the measurements made with our “home-built” ESR apparatus on some paramagnetic organic compounds (in particular stable free radicals) known for their strong response to electronic spin resonance.

Our apparatus does not have a very high sensitivity. Sensitivity increases as the frequency increases, in fact professional equipment works with frequencies in the range of 10GHz and magnetic fields of about 0.3T, while our equipment works at 40MHz with magnetic fields of 2mT. This causes a notable decrease in sensitivity so that our apparatus can detect the phenomenon of electronic resonance only in substances characterized by a very strong signal. Despite these limitations we have tried to make measurements with some compounds.

The TTF-TCNQ is a charge transfer complex. A charge transfer complex (CT) or electron acceptor-donor complex is an association of two or more molecules, in which a fraction of the electron charge is transferred between molecular entities. The resulting electrostatic attraction provides a stabilizing force for the molecular complex. The source molecule from which the charge is transferred is called the electron donor and the receiving species is called the electron acceptor. The following images show the structural formulas of the compounds.

The organic compound TTF-TCNQ can be easily obtained from some electrolytic capacitors such as those of the Sanyo of the OS CON series, shown in the following image. 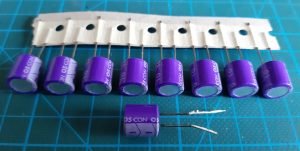 The TTF/TCNQ complex has unpaired electronic charges and therefore presents paramagnetic characteristics including a strong response to spin electronic resonance, as shown in the following graph where the trend in correspondence to the resonance conditions can be seen.

The data are recorded on file and subsequently analyzed, for example with Excel, or with other numerical data analysis software. The processing we carried out was simply the normalization of the signal, determining the regression line and subtracting the average value in order to highlight the trend of the signal in correspondence with the resonance conditions. The following graphs show the trend of the normalized signal. 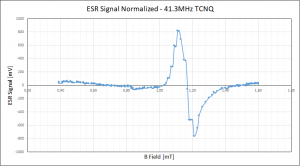 From the ESR measurements it appears that the TCNQ is characterized by strong electronic resonance response with a narrow line width, these characteristics make it ideal for being an ESR standard and for our demonstration applications.

TEMPOL (aka 4-Hydroxy-TEMPO) is a heterocyclic compound. Like the similar compound TEMPO, it is used as a catalyst and as a chemical oxidant, by virtue of its property of being a stable radical. These compounds belong to the category of nitroxides, where the unpaired electron belongs to the oxygen atom linked to the nitrogen atom present on the ring. The following images show the structural formula of the two compounds. 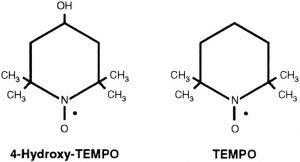 The TEMPOL compound can also be found quite easily online, for example at this ebay link: TEMPOL. 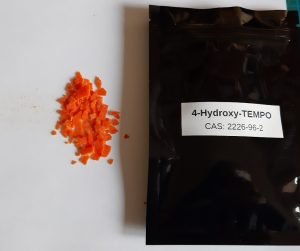 The TEMPOL compound, having an unpaired electron, is a paramagnetic salt that produces a good response to spin electron resonance. The following graph shows the trend of the magnetic field and the ESR signal recorded by our apparatus. 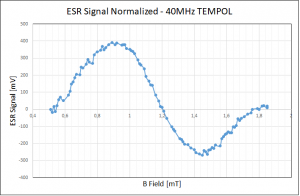 From the measurements carried out on the TEMPOL compound we obtained:
f0 = 40MHz
B0 = 1.2mT measured externally to the coils. Valued 1.32mT in the center of the coils
ΔB ≅ 0.6mT

From the ESR measurements it appears that TEMPOL is characterized by a good electron resonance response (lower than TCNQ), the line width is also considerably enlarged due to the interactions of the unpaired electron with the other molecules of its crystal lattice.

Our “home-built” demonstrative ESR apparatus, despite its relatively low sensitivity, proved adequate for the detection/measurement of spin electron resonance in some paramagnetic organic compounds such as TCNQ and TEMPOL, known for their strong ESR signal. The apparatus could be improved by increasing the frequency range (and the intensity of the magnetic field) in order to make it more sensitive and thus increase the possibilities of application.