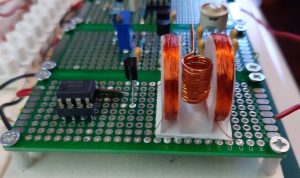 Abstract: In this post we are going to describe in detail the hardware modules that make up the apparatus for the electronic spin resonance already described in the previous post Electron Spin Resonance.
Reference to the project of Jabolatorium (http://www.jabolatorium.com/Projects/Esr/esr.html).

The hardware part of the electronic spin resonance apparatus is shown in the following image. On the right there is the PSoC controller that manages the device, records the data and transmits them through a USB/serial connection. On the upper part there is the lock-in detector with the signal amplifier and the regulator for the +5V power supply. On the bottom there are all the other modules, in particular the Helmholtz coils and the Robinson oscillator; in the center there are the terminal blocks for the distribution of the +5V and -12V/+12V power supply lines. The -12V/+12V line is obtained with a linear stabilized power supply, starting from +12V the +5V line is also obtained through a low noise regulator. 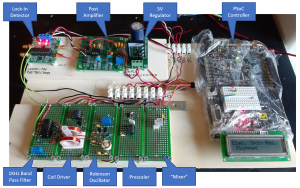 The basic scheme of the resonance apparatus is described in the following image: 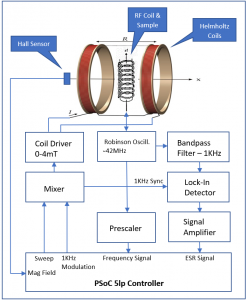 The project is based on the PSoC 5lp microcontroller. We used the CY8CKIT-050 prototyping board (but the cheaper CY8CKI-059 board could do just as well). The board is shown in the following image. It is powered directly with the 12V line; the I/O used belong to port E, which specializes in analog I/O. The firmware loaded on the microcontroller has the function of managing the whole apparatus by generating the sweep and modulation signals of the magnetic field, and acquiring the analog signals produced by the hall sensor and by the lock-in detector. The microcontroller also measures the frequency of the RF excitation, manages the LCD display and transmits the data on USB / serial line to a linux PC. 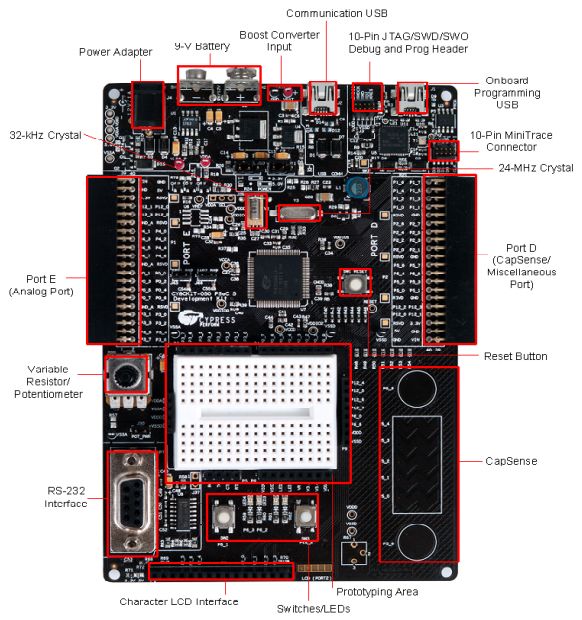 The “sweep” signal for driving the coils and the magnetic field modulation signal are both generated by the PSoC microcontroller. The sweep signal starts from a minimum of 200mV and reaches a maximum which is set by acting on the trimmer on the PSoC board. The maximum of the sweep signal is set at about 2-3V. The modulation signal has a frequency of 1KHz and is a sinusoidal signal with an amplitude of about 4Vpp centered on the average value of 2V. The modulation signal is reduced by the resistor divider up to about 100mV amplitude and “mixed” with the ramp signal with the capacitor C1. The 1KHz modulation signal, cleaned of the DC component, is then sent, as a sync signal, to the lock-in detector. 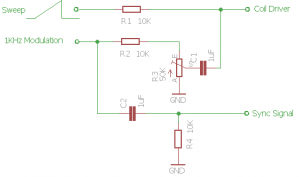 Helmhotz coils are available via 3D project at this link Mini Helmholtz coils. From the 3D project files you can easily obtain 3D printing via an external printing service. The holder is quite small and should be handled with care to prevent damage. We recommend printing a couple of copies in order to have a “backup”. The image below shows the supports we used. 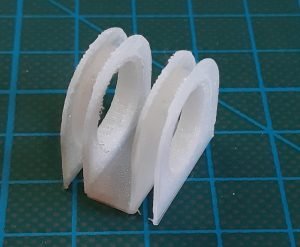 The coils made up of 300 turns of 0.15mm enamelled copper wire are then wound on the supports. Even 200 turns can be sufficient (they will have to be driven at a higher current to obtain the same magnetic field). We used cyanoacrylate glue to lock the windings in place. The image below shows our windings. 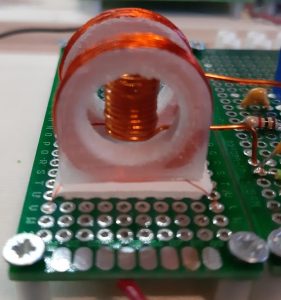 The coils are driven with a voltage follower made with the OP07 op amp followed by an NPN transistor, for example the BC337. The coils have a resistance of about 18Ω. They can be connected in parallel as in the diagram below, or in series. The voltage supplied by the operational reaches a maximum of 4V, at which the current is approximately 0.5A. Not being able to go up much in voltage, we preferred to connect the coils in parallel in order to have more current (in any case below the limits of the transistor). During operation the transistor and coils heat up but remain within normal limits. The image below shows the connection diagram. 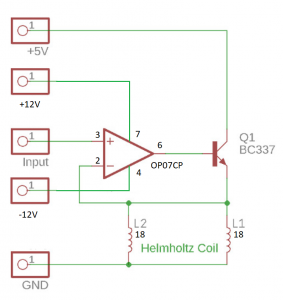 The “polarization” magnetic field generated by the Helmholtz coils is measured by a Hall sensor positioned near the center of the coils. We used the sensor DRV5055 with sensitivy 100mV/mT and range ±21mT.

The fundamental characteristic of a Robinson oscillator compared to a simple marginal oscillator is a limitation in the feedback loop. This means that a square wave current, of carefully fixed amplitude, is fed back into the L/C “tank” circuit. The “tank” circuit selects the fundamental of the square wave, which is amplified and fed back. This results in more stable and predictable operation. The voltage across the circuit, proportional to the Q factor, therefore depends on the magnetic resonance conditions occurring in the material under examination.

The resonant frequency of the LC circuit is determined by the inductance of the RF coil coupled with the capacitance of about 30pF, while the feedback is given by the capacitive divider C2/C3. C3 is a capacitive trimmer that allows us to vary the resonance frequency from a minimum of 40MHz to a maximum of 46MHz.

The oscillator is a delicate and very sensitive component. Several attempts must be made in order to find the optimal operating and sensitivity conditions. More details can be found in this pdf. 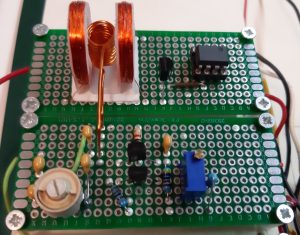 The RF signal has a frequency of about 50MHz, a little too high for direct acquisition by the microcontroller which has a clock of 44MHz. For the acquisition of the RF signal, the MB506 prescaler circuit was therefore used in order to divide the frequency by a fixed value (in our case 128). The prescaler output is converted to the TTL range by the Q1 BC337 transistor. The frequency read by the microcontroller will be multiplied by the corrective factor 128 in order to obtain the original value. The image below shows the prescaler scheme.

The return signal generated by the Robinson oscillator is filtered with a bandpass filter centered on 1KHz in order to eliminate low and high frequency noise. The band-pass filter is made with the UAF42AP “programmable” universal filter, as shown in the following diagram. The output signal from the filter can be amplified by “playing” on the R4/R3 ratio, a 50K trimmer has been chosen for R3 but its value can be increased to obtain greater amplifications. 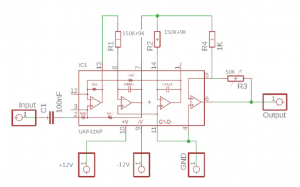 The Robinson oscillator signal, after bandpass filtering, is sent to the lock-in detector, based on the AD630 chip. We used a test board including, in addition to the AD630 chip, also an input preamplifier and an output low pass filter. The lock-in detector allows to extract extremely weak signals from the noise, drastically improving the S/N ratio, details on this technique can be found at this link: Lock-in Amplifier. Since our board has a low pass filter at 0.1Hz at the output it is important to vary the magnetic field slowly so that the signal variations are not blocked by this filter. The following images show the evaluation sheet used. 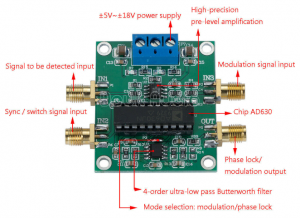 The signal produced by the lock-in detector is further amplified by a signal amplifier. The gain can be adjusted by varying the resistors R2 and R5. The amplified signal is level shifted and brought to an average value of about 2500mV in order to exploit the entire range of the microcontroller ADC converter. The ADC input is protected from overvoltages by the two diodes towards GND and towards +5V. The coupling capacitor C1 must be chosen with a sufficiently high value to allow the “passage” of even the slow variations of the ESR signal, we have adopted a parallel of four 10uF capacitors. The diagram below shows the details of the amplifier.

We have completed the description of the electronic modules that make up the apparatus for electronic spin resonance. The next post (Electron Spin Resonance – SW Part) will focus on the software part: the microcontroller firmware and the python program for data acquisition.