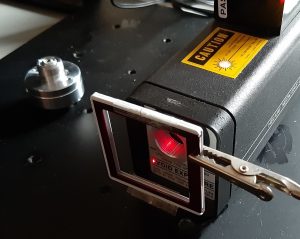 Abstract: in this post we propose two applications of diffraction theory for the measurement of small objects: the thickness of a hair and the diameter of a red blood cell. For these measurements, Babinet’s principle is applied to the diffraction pattern generated by an obstacle.

In physics, Babinet’s principle states that the diffraction pattern generated by an opaque body is identical to that produced by a hole of the same size and shape except for the overall intensity of the light transmitted in the forward direction. It was formulated in the 1800s by the French physicist Jacques Babinet.

According to Babinet’s principle, the diffraction pattern produced by a hair is the same as that produced by a slit having a width equal to the thickness of the hair.
The diffraction pattern produced by a slit is well known and consists of a central maximum followed by a series of minor maximums separated by minimum points. If the slit is vertical the series of highs and lows will be arranged horizontally.
Applying the diffraction theory it is easy to derive the condition for a point of minimum intensity to be formed on the screen: referring to the following image, we see that the path difference of the secondary waves generated by the upper edge of the slit and its midpoint is equal to (a/2) sin(θ), if this difference in path is equal to half a wavelength, there will be destructive interference of the two waves and therefore minimum intensity, this corresponds to the relationship:  (a/2) sin(θ) = λ/2 that is a sin(θ) = mλ where m is an integer .. -2,-1, 0, +1, +2, … Angle θ is easily determined from the ratio between distance y and distance D (from slit to the screen).

The experimental setup is shown in the following image. The He-Ne laser is placed on an optical bench and directly in front of the exit mirror is placed the hair positioned in a slide holder. The screen is positioned at a certain distance so that the maxima and minima of the diffraction pattern are well spaced. 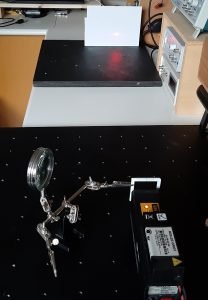 The following image shows the diffraction pattern projected on the screen.

For each minimum point, its distance from the central maximum was taken and the corresponding value of sin(θ) was calculated. The following graph shows the data taken for the minimum points visible on the screen, together with the relative integer m. The points of the graph identify with excellent precision the regression line from which the parameter sin(θ)/m can be obtained. We need this parameter to calculate the d value (hair thickness). 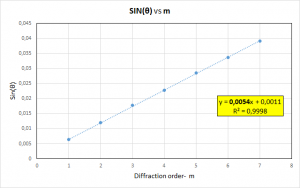 From the data obtained from the measurements and from the knowledge of the wavelength emitted by the He-Ne laser we can easily determine the thickness of our hair:

Measurement of the size of a Red Blood Cell (Erythrocyte)

We can use Babinet’s principle to make an interesting measurement of biological relevance. As we know, blood is made up of a liquid part – plasma – and a corpuscular part made up of the cells contained in the blood. The cells are mostly red blood cells – erythrocytes – which have the function of carrying oxygen to the cells of the body. By studying the diffraction pattern produced by a layer of erythrocytes we can estimate the size of the cell knowing that the diffraction pattern is the same as that produced by a circular opening having the same dimensions.
The diffraction produced by a circular aperture – in practice a hole – is constituted by a central maximum surrounded by a series of rings with gradually lower intensities. The underlying physics is in practice the same that governs slit diffraction even if, to be precise, the exact solution involves the use of remarkably complex mathematics.
For the first minimum, the simplified relation can be used d sin(θ) = 1.22λ, where d is the diameter of the hole. The following image shows the diffraction pattern, also known as the Airy disk.

The experimental setup is shown in the following image. The He-Ne laser is placed on an optical bench and the microscope slide with the blood “smear” is placed directly in front of the exit mirror. The screen is positioned at a certain distance so that the maxima and minima of the diffraction pattern are well spaced. 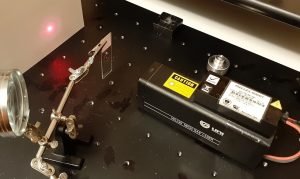 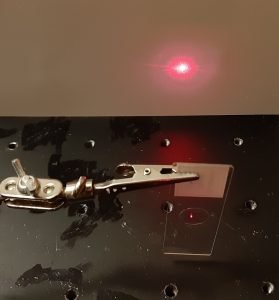 To achieve good results it is important that the red blood cell layer on the slide is as thin as possible, ideally a single layer of cells. In this way the diffraction figure obtained is sharper. The image below shows our slide with the blood sample.

From the distance of the first minimum of the diffraction figure we can directly derive the diameter of our red blood cells:

The undulatory behavior of the light surprised us once again. Babinet’s principle, based on the diffraction phenomenon, seems, at first glance, totally counter-intuitive but this is how light behaves! The application of this principle has allowed us to make a quantitative estimate of the size of red blood cells, obtaining values ​​in line with commonly accepted values.