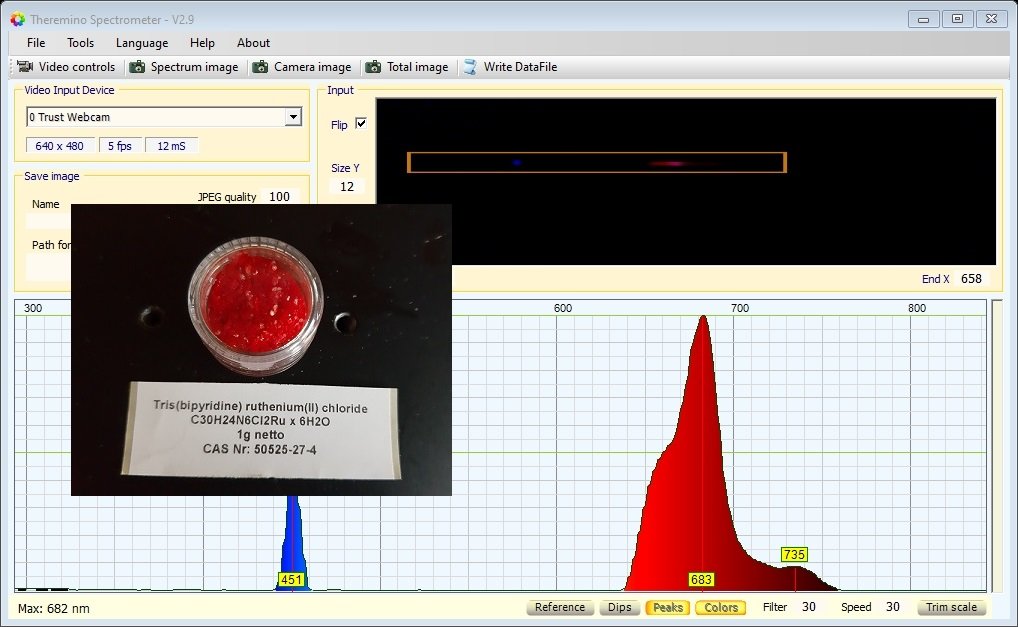 Abstract : In this post we use the apparatuses for the study of fluorescence (spectrum and lifetime), apparatuses that we have described in previous posts, for the analysis of the photophysical properties of a particular molecule: Ru(bpy)3. It is an organo-metallic molecule based on ruthenium, this compound has interesting luminescence properties (chemiluminescence and electroluminescence) that make it a candidate for innovative biophysical applications, so much so that it is sometimes referred to as a sort of artificial chlorophyll. 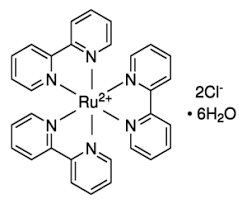 (from Wikipedia) Ruthenium (II) tris (bipyridine) chloride is the complex salt usually indicated with the formula [Ru(bpy)3]Cl2 (bpy = 2,2′-bipyridine). The salt is commercially available in hexahydrate form, and under normal conditions it is a red crystalline solid, soluble in water and in polar organic solvents. The [Ru(bpy)3]2+ cation is one of the most studied complexes in photochemical laboratories all over the world since the 1980s. The reason for this interest lies in a unique combination of chemical stability, redox properties, luminescence and reactivity in the excited state. In the image on the side we see its structural formula in which the ruthenium atom is linked to three bipyridines.
In solution, the compound takes on a yellow-orange-red color depending on the molar concentration. 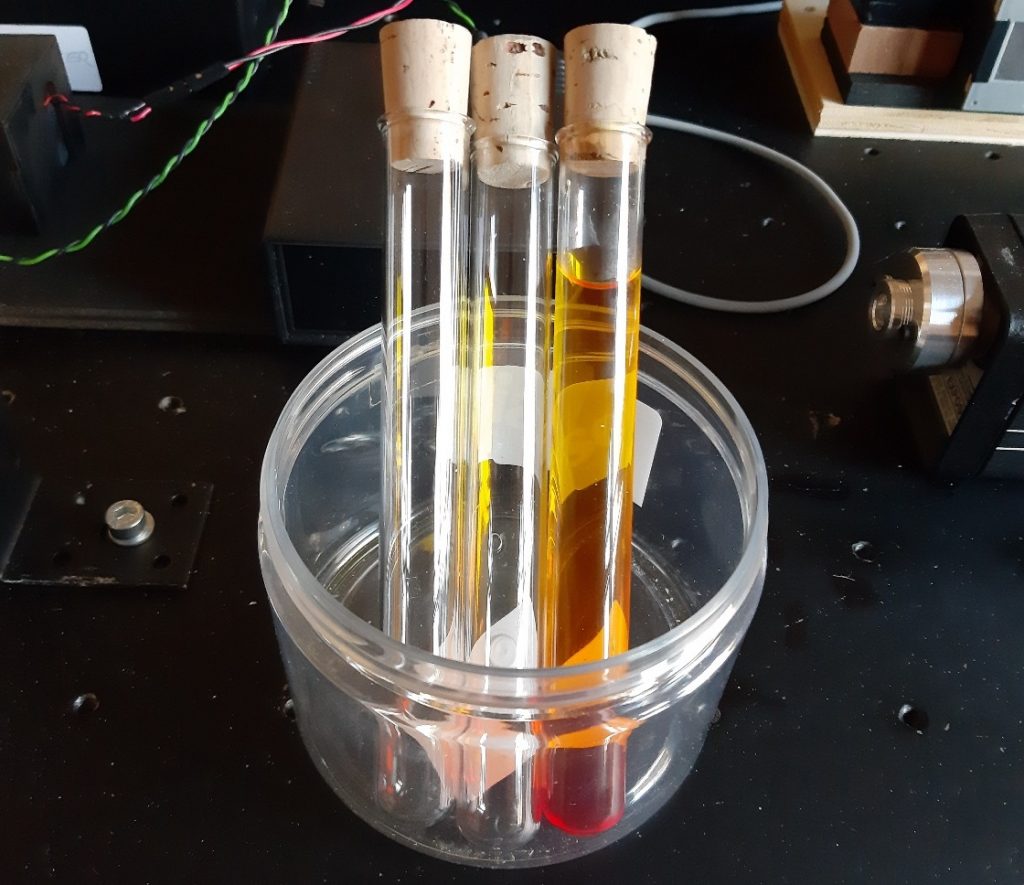 The cation [Ru(bpy)3]2+ absorbs ultraviolet and visible light. Aqueous solutions of [Ru(bpy)3]2+ are yellow or orange in color depending on the concentration. The color is due to an intense absorption band around 450 nm with high molar absorbivity. In the absorption spectrum there are also bands at 285 nm corresponding to transitions centered on the ligands (LC), and bands at about 350 nm due to transitions centered on the metal (MC). In the image below we show two cuvette: on the left a solution of Ru(bpy)3, on the right a solution of chlorophyll. 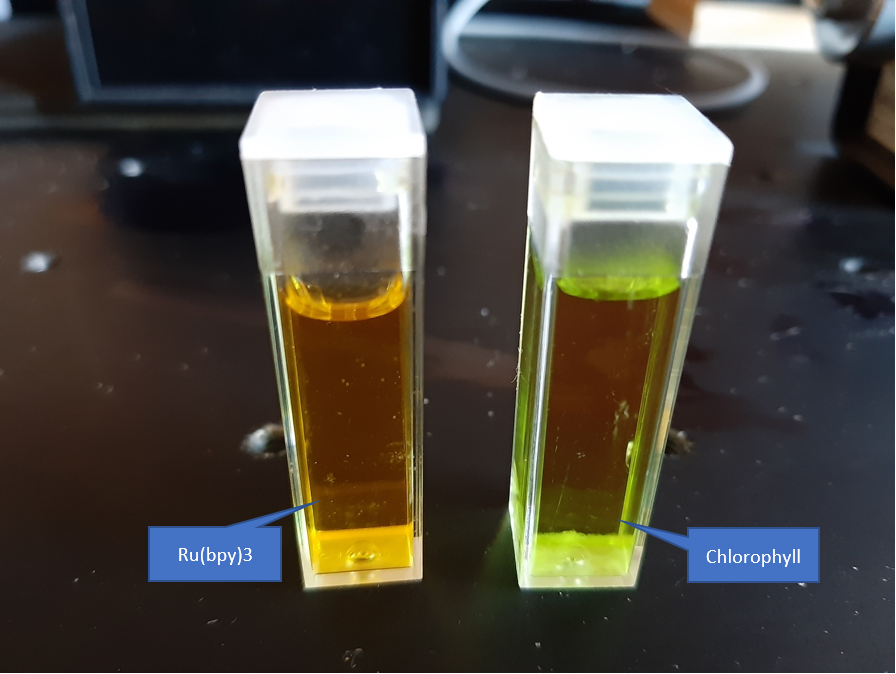 When the complex absorbs light there is an electronic transition that leads from the ground state of 1GS singlet to the excited state of 1MLCT singlet. An intersystem crossing (kisc) process follows to form the excited 3MLCT triplet state. The latter is characterized by a fairly long life time, 890 ns in acetonitrile and 650 ns in water, which allows it to interact with other molecules. In the absence of these reactions the excited state 3MLCTdecays returning to the ground state 1GS. Three different processes are possible: (1) through non-radiative relaxation knr, where excess energy is released as heat into the surrounding environment, (2) passing through the 3MC state which in turn deactivates in a non- radiative in the ground state, or (3) radiatively (kr) by emitting a photon (luminescence). The quantum yield of luminescence is 2.8% at 298K in water saturated with air, and the maximum of the emission band is at about 620 nm. The image below shows the diagram of the states of the molecules involved in the absorption and light re-emission process.

The absorption spectrum of the aqueous solution is shown in the following diagram. In accordance with the provisions of the measurements found in scientific literature, we have found that the main absorption band is centered around 450 nm.

The fluorescence spectrum is shown in the following graph. As a source of excitation we used a blue LED with emission on 450 nm, corresponding to the peak of maximum absorption. The fluorescence is intense and is placed on the red-orange band with the maximum around 630 nm.

With our apparatus for measuring the decay time of the fluorescence we made the measurements on the aqueous solution of Ru(bpy)3, in the following two traces we report in blue the trend of the light emission recorded by the photomultiplier, while the trace in yellow corresponds to the current pulse of the LED. It can be seen that in the first 50 ns there is an impulsive trend followed by an exponential decay with times of the order of hundreds of nanoseconds. 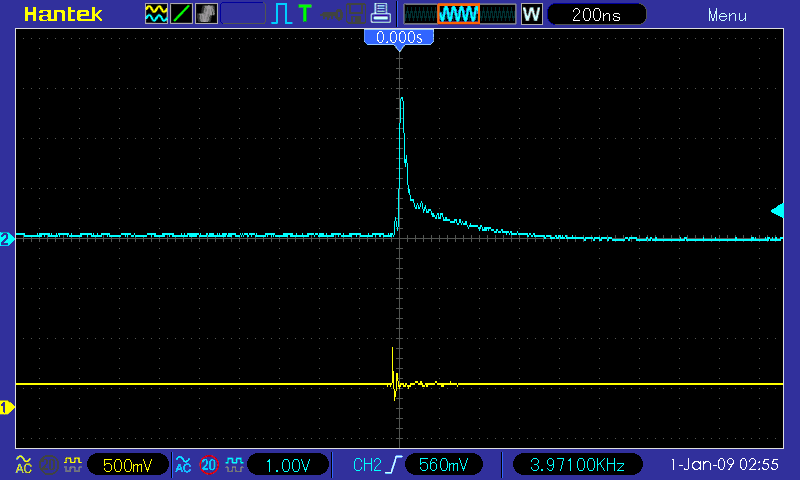 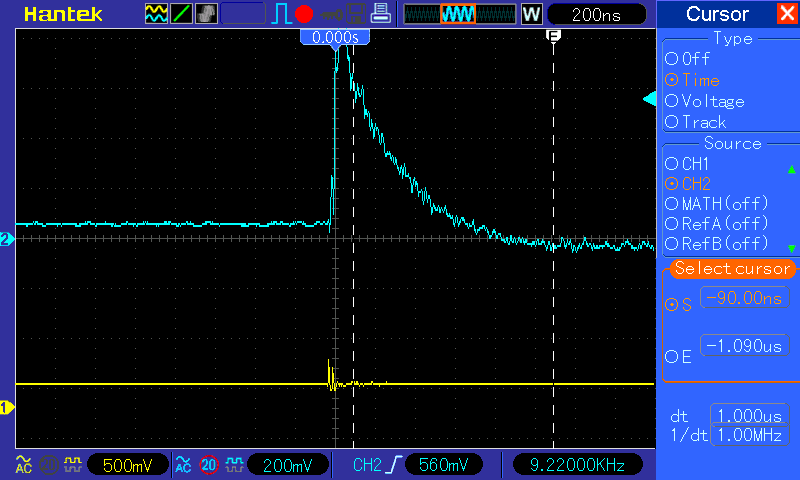 By acquiring the digital signal from the oscilloscope we tried to make a more precise evaluation of the exponential decay. The graphs below show the excitation pulse trend in orange and the fluorescence emission trend in blue. Regression with exponential trend gives us a time constant of 200 ns, a value a little less than the expected value. This discrepancy could be explained by the presence of impurities in the water used as a solvent. Impurities, as well as dissolved oxygen, act by increasing the probability of non-radiative decay (quenching).

Even with amateur media we managed to obtain clear evidence of the photophysical properties of the Ru(bpy)3 complex. At this point it would be interesting to deepen the subject by designing and implementing applications exploiting the chemiluminescence and electroluminsescence properties of the molecule.