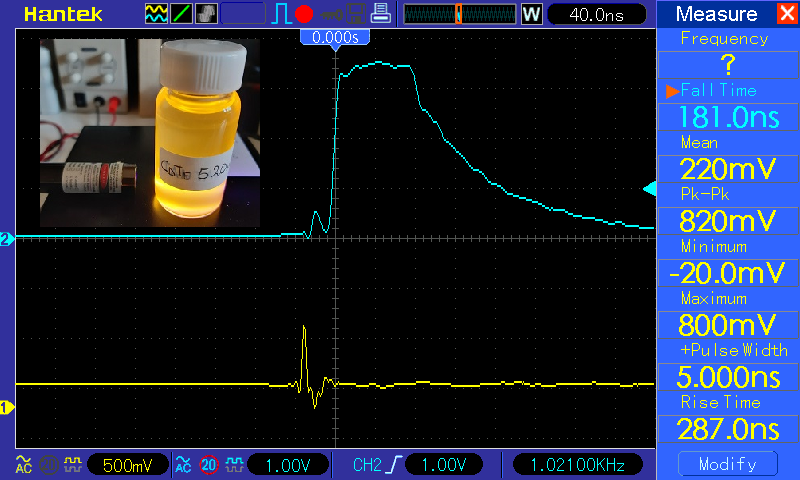 Abstract : in this post we describe the measurements of the fluorescence decay time in some compounds that have particularly long decay times, therefore suitable for being measured with our experimental setup.

With the system described in the post Fluorescence Lifetime Apparatus we carried out a series of measurements on some fluorescent compounds in order to determine the exponential decay constant of the light emission. The data were obtained by acquiring the signal with the oscilloscope. The measurement can be made directly with the oscilloscope by activating the measurement functions or the numerical data of the signal can be exported to a file in csv format and subsequently analyzed, for example with Excel. The advantage of the direct use of the oscilloscope is that the signal can be averaged over multiple samples, even 64 or 128, this allows to significantly reduce the contribution of interference or random noise and obtain signals with much less disturbed trends. 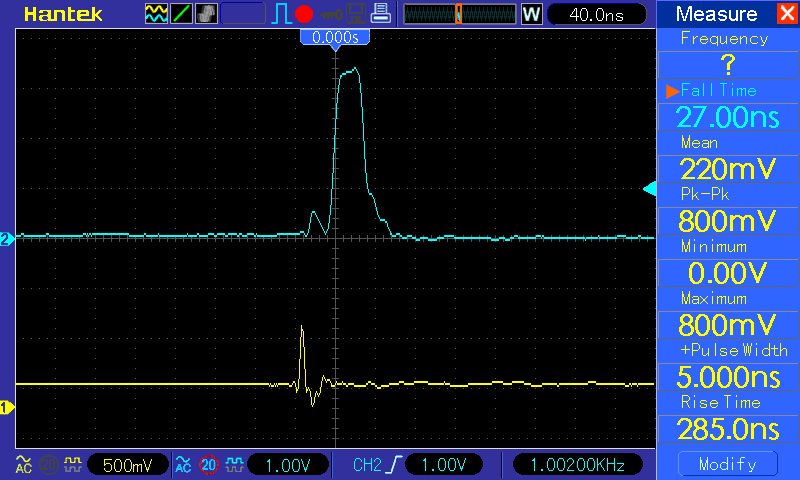 Quantum dots (QDs) are extremely interesting compounds: they are nanostructures made up of a few hundred atoms. The diameter of a typical QD is less than 10nm. At this dimensional scale, quantum phenomena and physical properties related to the very high ratio between surface and volume become important. In the case of QDs we can think of them as “super-atoms” inside which the electrons remain trapped as in a potential hole. From theoretical considerations it is clear that the allowed energy levels are discrete and the energy level depends on the spatial dimensions of the QD. The demonstration of this effect is easily obtained by studying the fluorescence spectrum of the QD, as we did in the post Quantum Dots : a True “Particle in a Box”.

A characteristic of the fluorescence of QDs is the particularly long duration compared to other fluorophores: typical decay time is 10-100 ns. These durations make the phenomenon easily measurable even with our apparatus.
The images below show our CdTe QDs and the relative temporal trend of fluorescence. The measurement of the fall time corresponds to the time between 90% and 10% of the initial intensity, the exponential time constant can be obtained with the formula: τ = Δt/2.195.

Even the scintillator crystals used for the detection of particles and gamma radiation have the property of fluorescence: in fact it is the luminescence induced by the radiation that is used for the detection and measurement of radiation (post Scintillation Crystals). For some of these crystals, the decay time measurement can be made without a pulse of light excitation: it is sufficient to acquire and measure the pulses that are produced following the detection of background radiation.
The traces shown below refer to two of the most used crystals: NaI (Tl) and CsI (Tl). Both show a characteristic exponential decay, with a lifetime of 244 ns for the NaI (Tl) and 625 ns for the CsI (Tl). It is known that these crystals are not particularly fast, other types of scintillators, such as plastic ones, have much shorter decay times.

The third scintillator crystal we examined is BGO (bismuth germanate). We examined this by exciting it with a light pulse and recording the decay in the intensity of the induced fluorescence. The results are shown in the following diagrams, from which a decay time of 333 ns is obtained with a good approximation. 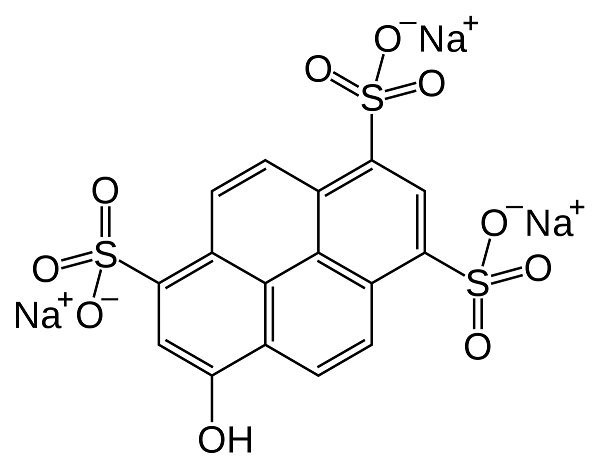 Pyranine is a pH sensitive hydrophilic fluorescent dye belonging to the aryl sulfonate group. Pyranine is soluble in water and is used both as a biological dye and as a pH indicator. Pyranine is also found in yellow highlighters, giving them their characteristic fluorescence and bright yellow-green color. In the image on the side you can see the structural formula of pyranine. Pyranine is derived from pyrene. Pyrene is an aromatic polycyclic hydrocarbon (PAH) consisting of 4 condensed benzene rings. Often the aromatic compounds such as benzene and its derivatives, with the electrons of the π bonds delocalized on the whole molecule, exhibit characteristic fluorescence phenomena. Pyrene and pyranine are no exceptions and also have a particularly long decay time.
Our measurement, presented below, provides a decay time of the order of 50 ns. Uranium oxides, in particular uranium dioxide, are compounds whose use is mainly reserved for the nuclear industry. However, they are also used, or rather were used, as dyes in some glazes for ceramics and as additives to glass to produce green glass with fluorescent properties. We subjected a sample of this glass to the measurement of the fluorescence decay, obtaining a value of the order of hundreds of nanoseconds, as shown in the following diagram. With this work we have shown that the study of time-resolved fluorescence is also accessible to laboratories equipped with self-built amateur instrumentation. The temporal resolution that can be obtained is in the order of ten nanoseconds, not very high but still sufficient to study many fluorescent compounds.