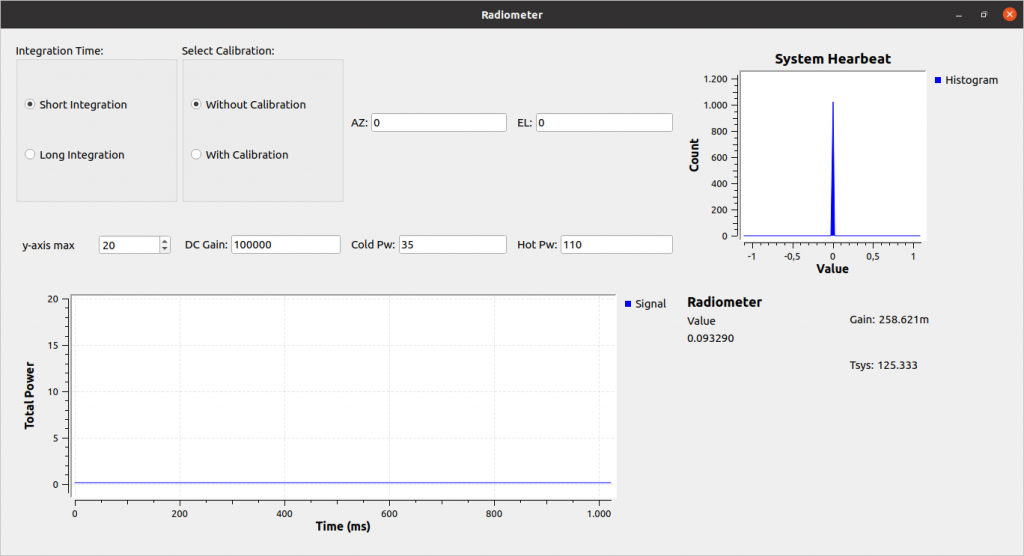 Abstract : In this post we continue the description of our diy microwave radio telescope. In the first part: A simple 11.2 GHz RadioTelescope (HW Part) we have described the hardware part of the instrument, including the parabolic reflector antenna, the LNB block and the receiver. Now we take care of the software that does the measurement of the signal strength and its integration over time.

The radiometer is basically a receiver that has the purpose of measuring the power of the electromagnetic signal captured by the antenna within a specific frequency band. The basic diagram of the radiometer is shown in the following image: there is an antenna connected to an LNB (low noise converter-amplifier) ​​followed by a square-law detector which measures the power of the received signal. The next stage is an integrator (low-pass filter) which has the purpose of averaging the signal over time, with an appropriate time constant, in order to reduce the statistical fluctuations due to noise (with null average), making the signal stand out. Additional components can be intermediate frequency amplifiers, band-pass filters to limit the receiving band and DC amplifiers to increase the signal level.

As it is clear, the detection of the signal strength and the subsequent temporal integration do not preserve the spectral characteristics of the signal: the signal is averaged over time and within the pass-band of the instrument to obtain the average power. The sensitivity of the radiometer increases as the bandwidth increases (more signal is collected as the band increases) and as the integration time increases (the incidence of noise of null mean value decreases). For long integration times it is necessary the stability of the amplification parameters and that the physical process under study is stationary.

The signal strength measured by the radiometer is usually expressed as a temperature and is called the equivalent noise temperature. This temperature and power are related by the following relationship:
W = k*B*Tn
Where k is Boltzmann’s constant, B is the frequency band, W is the power and Tn the equivalent noise temperature. Naturally Tn includes the contributions due to the internal noise of the receiver and the contributions of the signal picked up by the antenna. In turn, the signal picked up by the antenna will be given by the signal coming from the source we are studying, also expressed in terms of brightness temperature, added to the background noise (cosmic noise, atmospheric noise, radiation from the ground).

We can theoretically determine the sensitivity of a radiometer using an equation, called the radiometer equation, which provides the minimum variation ΔT of the equivalent noise temperature that the system can measure:

In the previous post A simple 11.2 GHz RadioTelescope (HW Part) we described the hardware part of the receiver, consisting of the LNB, a band-pass filter and a wideband amplifier. The signal, after the intermediate amplification stage, is sent to an SDR device (Airspy) which acquires and digitizes the signal. The data stream is then processed via software (with the GNURadio framework) in order to create the radiometer functionality.

We have already used and described GNURadio in the project on receiving the emission at 21 cm of neutral hydrogen. We refer to this post for more details: GNURadio Software for 21cm Neutral-Hydrogen Line.

The GNURadio application we need now is basically a radiometer. The signal picked up by the antenna and subsequently amplified and filtered by the RF components is sent to the SDR receiver which acquires it in digital format. At this point the signal must be processed in order to calculate its total power in the reception band and subsequently integrated over time (filtered) and recorded on file.
Our radiometer is depicted in the following diagram. 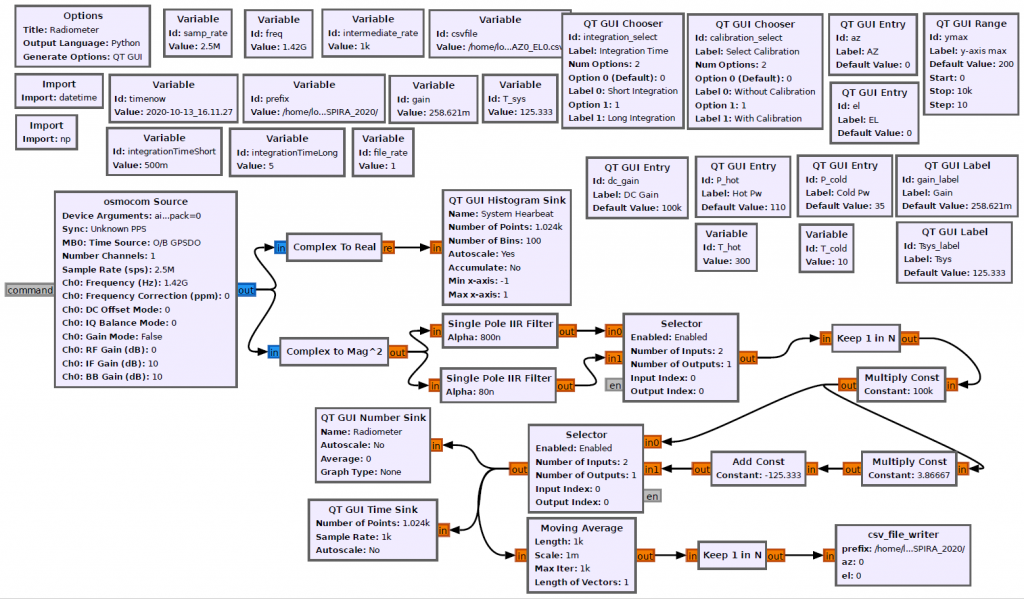 The osmocomm source block is the interface with the Airspy R2 SDR hardware. In our case we do not use the bias-T option so in the argument string we have put “airspy = 0, bias = 0, pack = 0”. The Sample Rate parameter can be set to 2.5 MHz or 10 MHz, these values ​​correspond to a useful band of about 2.5 MHz in the first case and 10 MHz in the second. The Frequency parameter is set at 1420 MHz which is the center frequency of our HW band pass filter. The RF gain is set to 0, while the IF and BB gains are set to 10 dB. We have found that this gain configuration, with our RF hardware, allows for good system utilization. With different amplification chains, these parameters can, of course, be varied in order to optimize performance.

The complex data coming from the SDR device (airspy R2) are sent to the block that determines the instantaneous signal strength in a way similar to a square-law detector:

where I and Q are the components in phase (real component) and in quadrature (imaginary component). The signal is then filtered (integrated) with a single-pole IIR filter. There are actually two filters, alternative to each other, which provide two different time constants, one short and one long, which can be configured in the respective variables and selected from the radiometer GUI. The short time constant could be 0.5 s while the long one 2 s. The Alpha coefficient of the filter is calculated with the formula:

Where samp_rate is the sampling frequency (2.5 MHz or 10 MHz) and the integrationTime is the filter integration time constant. The flowchart is shown in the following image.

After the selector block that determines the IIR filter used, the data stream is subjected to decimation to reduce the number of samples and not to overload the computer. the decimation constant is determined by: int(sample_rate/intermediate_rate). Where intermediate_rate is the intermediate frequency of the samples, configured at 1 KHz. After decimation, the data is “amplified” by multiplying it by a constant configurable from the GUI: DC Gain. Downstream of this block there is the calibration part. From the GUI, the calibration can be “enabled” or “disabled” using the selector block. Calibration is described in the next paragraph.

In the last part of the flowchart the average (moving average) of the last 1000 samples is calculated, in order to have a further integration in order to improve the signal/noise ratio. Before recording the data on a file in csv format, the stream is decimated again with the decimation constant determined by: int(intermediate_rate/file_rate). Where file_rate is the frequency of writing data to file. The csv_file_writer block is a custom block made in python that records the input data and the timestamp in csv format.

The calibration of the radio telescope has the aim of calibrating the signal measured by the instrument with emitters with a known brightness temperature. As described in the first paragraph, the signal obtained at the receiver output is the sum of the useful signal with the antenna and receiver noise. To use our radio telescope efficiently and to obtain accurate measurements, however, we need to separate, as far as possible, the contribution of the signal from the noise: this is done with the calibration procedure.
If we assume that the behavior of the system is linear then it is sufficient to measure two points, with known temperatures and sufficiently distant from each other. The measurement is usually performed on a cold point, for example by pointing the antenna to the zenith, in the absence of radio sources, where the brightness temperature has a value of around 10 °K; and pointing the antenna towards a hot spot, for example the ground, for which a brightness temperature of about 300 °K is assumed.
The values ​​obtained are entered directly into the GUI and then the system mode “with calibration” is selected. In this way the system output is directly the equivalent noise temperature seen from the antenna. For further details on the calibration procedure, please refer to GNURadio Software for 21cm Neutral-Hydrogen Line.

The simplest observations for an amateur system like ours are the transit registrations. In practice, the radio telescope is pointed towards a predetermined direction and waits for the radio source to pass within the antenna beam, while recording the strength of the received signal. This technique is especially applicable to “point” radio sources such as the sun and the moon.
The sun has an apparent diameter of 0.31°, while our antenna has a beam of 1.45°. The result obtained will be the spatial convolution between the radio-source distribution and the beam diagram of our antenna: in practice the spatial distribution of the radio-source is “diluted” by the antenna over a greater space. In the image below we show the recording of the transit of the sun made with our 1.2 m antenna on a 2.5 MHz band. 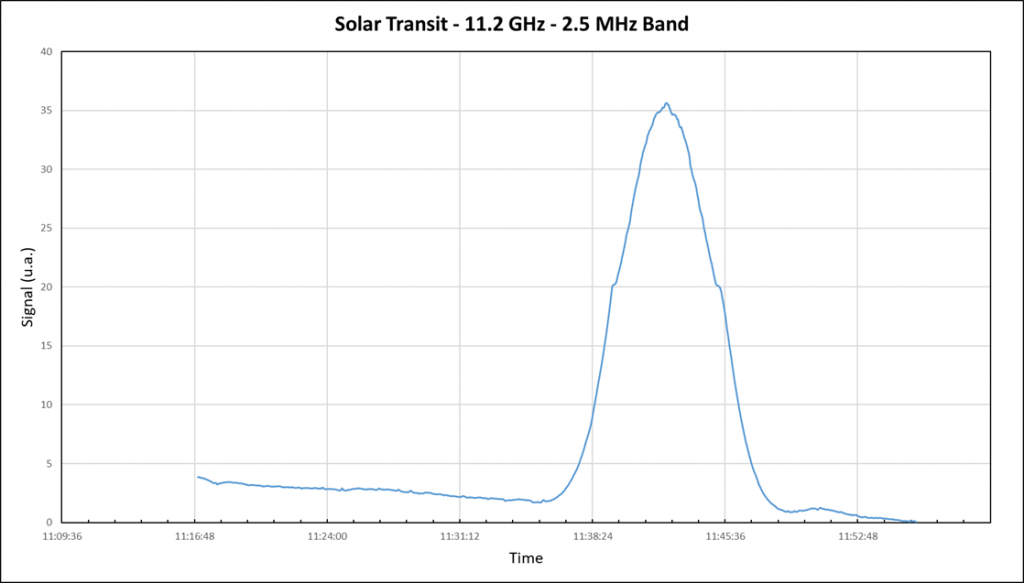 Using the same transit registration technique, we measured the radio emission of the moon. The moon has an apparent diameter equal to that of the sun: 0.31° and therefore the result obtained is similar. In the image below we show the recording of the transit of the moon made with our 1.2 m antenna on a 2.5 MHz band. 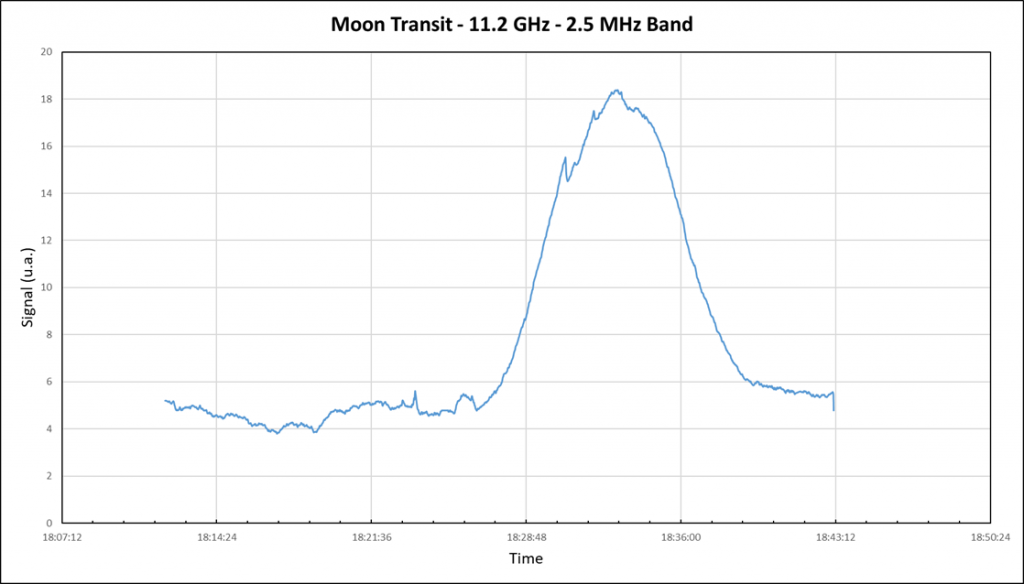 At 11.2 GHz the main radio sources (excluding sun and moon) are quite weak and difficult to receive with a 1.2 m parabolic reflector. The distributed emission of the Milky Way should be within our reach, but radio-sources such as Cassiopeia A, Taurus A and Cygnus A are at the limit of the possibilities of our instrument, but an attempt can be made! It could be useful to increase the reception band: 10 MHz still with airspy or using a broadband HW RF power detector. In this last case we would have the whole band of our system available: the 80 MHz determined by the band-pass filter. But this will be the subject of another post on our Blog.