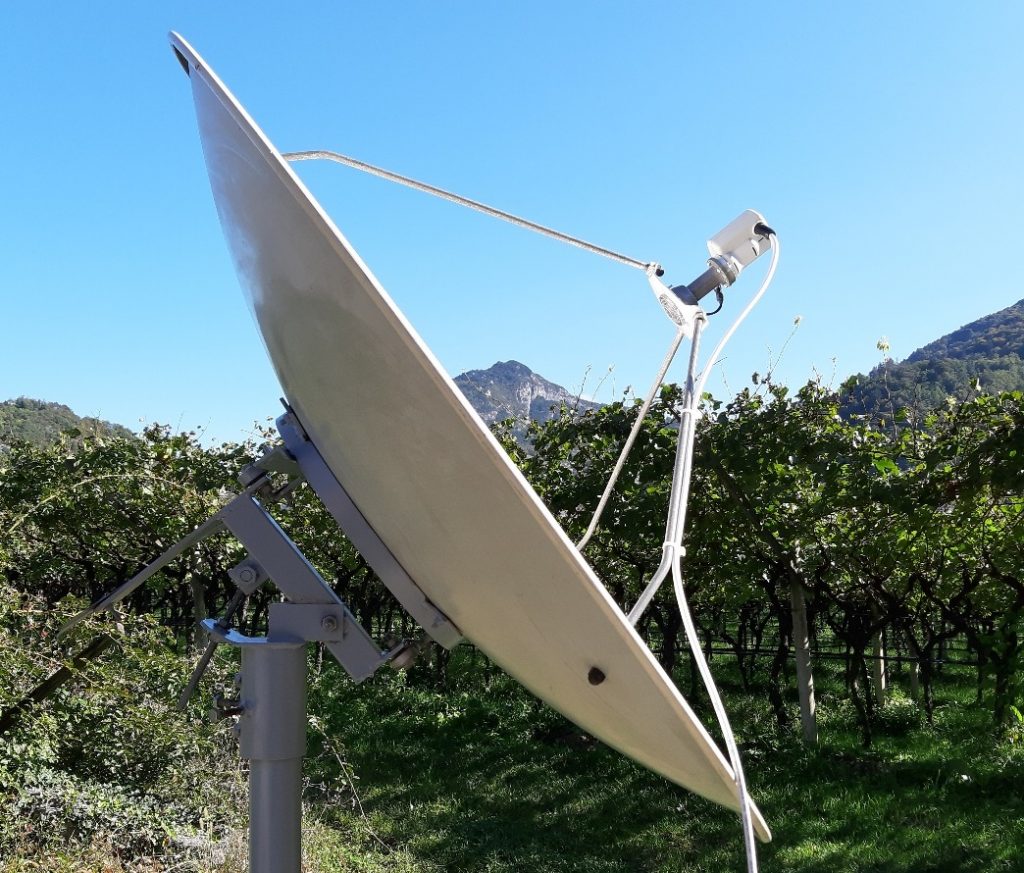 Abstract : In this post we describe the construction of a small amateur radio telescope operating at the frequency of 11.2 GHz. The construction of the radio telescope takes advantage of the satellite TV market which has made it easy and cheap to find parabolic reflector antennas with relative illuminator (feed horn) and LNB block (low noise amplifier-frequency converter). The performances of a similar instrument are naturally rather limited, however they still allow to make interesting observations of some of the most intense radio sources.

Radio astronomy is a difficult and fascinating science. It requires the use of bulky and expensive antennas, uses sophisticated radio-electronic technologies and sophisticated algorithms for signal processing. At first glance it would seem completely beyond the reach of an “amateur”. In reality it is possible to make interesting radio astronomical observations even at an amateur level.
On our site we have already described some radio astronomy projects for specific applications:

Radio astronomy studies celestial bodies by analyzing the radio waves emitted by objects in the sky: any object emits electromagnetic waves through various physical processes (thermal and non-thermal), these waves are picked up by the antenna and analyzed with appropriate instruments: in general the characteristics of the captured signal are no different from those that characterize a broad spectrum electrical noise. The purpose of the radio telescope is to pick up this radiation and measure the signal strength, such an instrument is called a radiometer. To be precise, we speak of power per unit area and per unit of bandwidth and is expressed in Jansky : 1Jy = 10-26 W/m2 Hz.

To choose the most suitable frequency band for an amateur radio telescope we must make a compromise between the observation possibilities and the cost and feasibility constraints. The frequency spectrum of the radio-source emissions depends on the underlying physical process: for “thermal” emissions such as the sun or the moon, the intensity follows the law of the black body with maximums at high frequencies (according to the approximation of Rayleigh-Jeans I ∝ 1/λ4), while for non-thermal emissions (for example synchrotron emission) the maximums are at lower frequencies, as can be seen in the graph below which shows the intensity of some radio sources as a function of frequency. 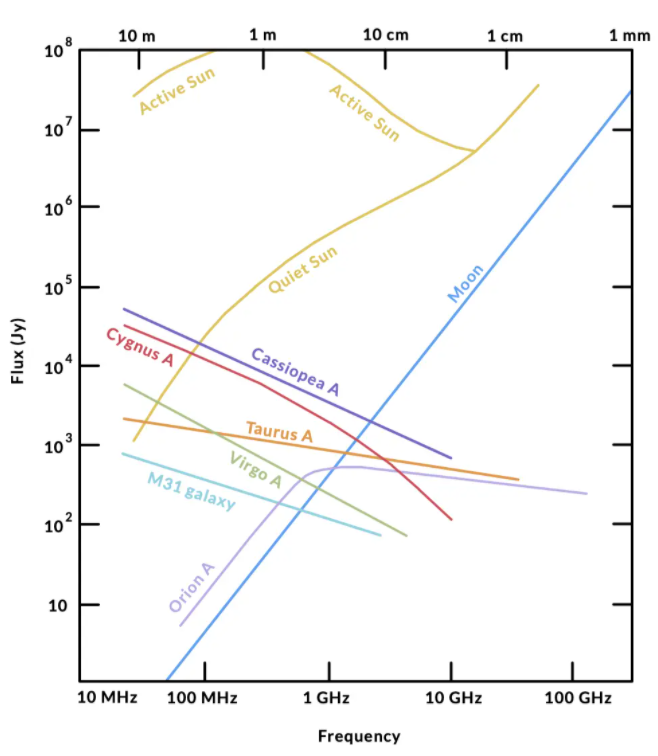 As we know the dimensions of the antenna are related to the wavelength of the radiation to be received, furthermore our antenna must be sufficiently directive, otherwise it would be practically useless: this means that to receive frequencies below 1 GHz the dimensions of the antenna should be significantly greater than 1m: large antennas are expensive and difficult to move.
Another aspect to consider is external radio interference. The ether, especially in the city, is now saturated with transmissions and RF signals from the most heterogeneous origin: radio and TV broadcasting, cellular networks, WiFi networks, disturbances from power lines, etc …. Not having the possibility to install the radio telescope in “quiet” places we must choose a frequency band that is not too disturbed.

For the reasons described above, the choice is almost obligatory: the 10-12 GHz frequency band is the one that seems most suitable for an amateur project like ours. At these frequencies, parabolic reflector antennas and devices designed for satellite television can be re-used. The costs of the equipment are affordable, the spatial resolution of the antenna is quite good and the interference is low (basically broadcasting satellites) and easily avoidable.
Working at lower frequencies would make it possible to easily receive more radio sources but with a considerable increase in terms of costs, not to mention the problem of interference.

The antenna we found on the second-hand market is a prime focus dish with a diameter of 120 cm. For radio astronomy applications it is better that the dish is of the prime focus type: in these antennas the feed horn is placed in the focus of the dish. In offset-type dishes, the feed-horn is not placed in the center but on the side, this type has constructive advantages but is more difficult to aim to the source than the prime focus.

The images below show the antenna and the metal structure used for manual movement. 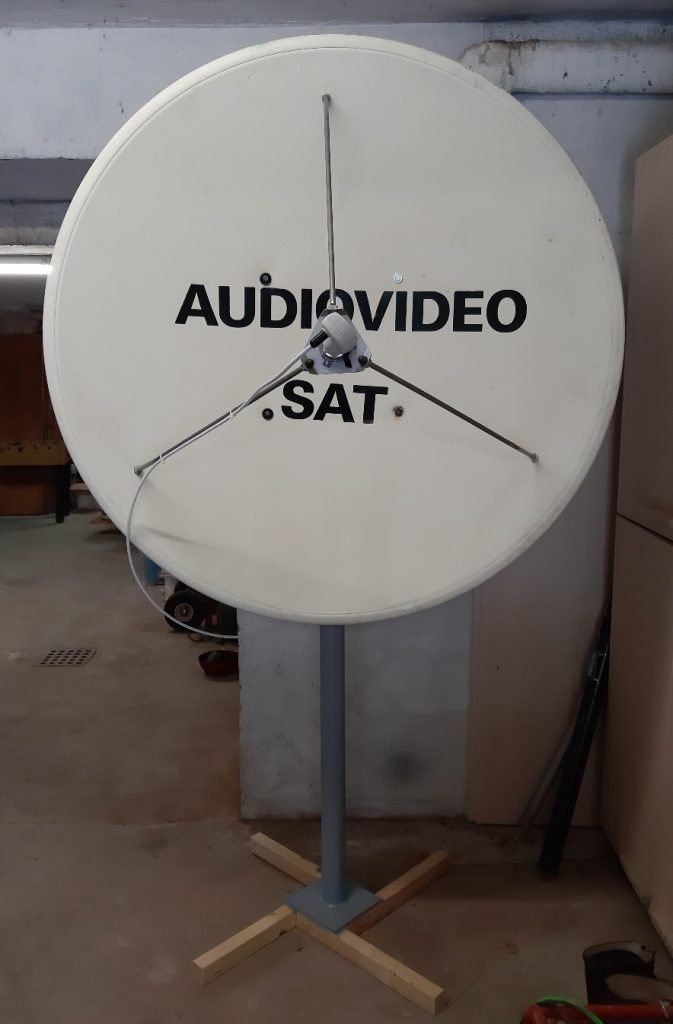 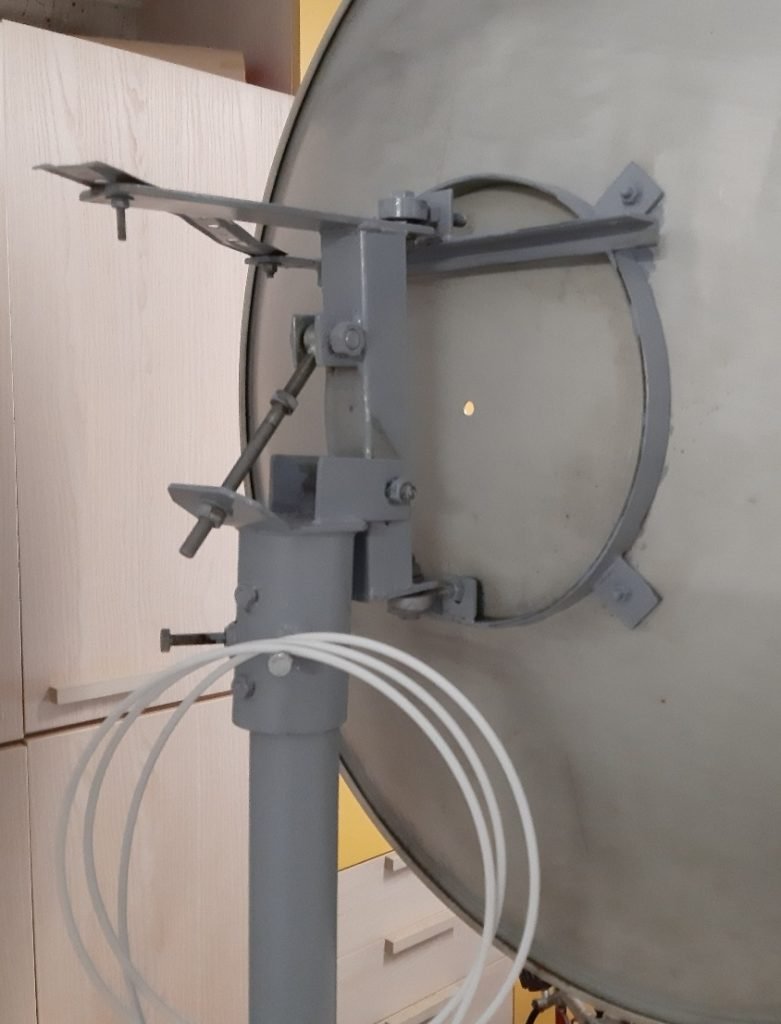 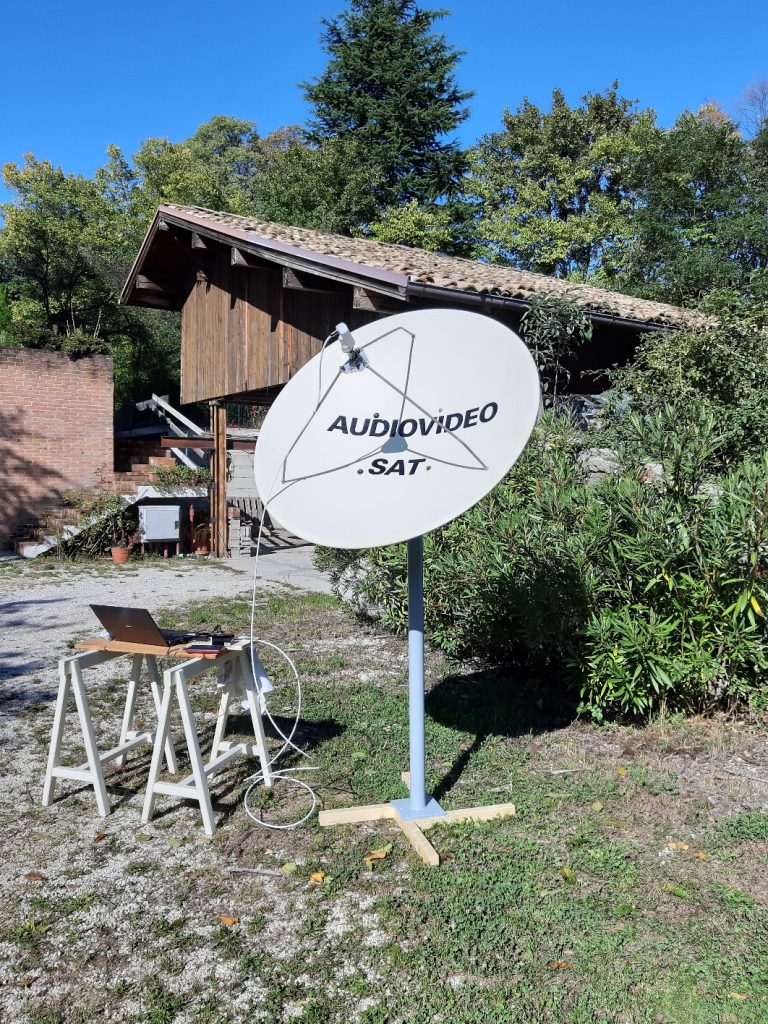 The first component of the system is the converter-amplifier block, the so-called LNB. This is the most important component because system performance largely depends on it. Our system receives in the 10-12 GHz band, at these frequencies the use of cables is problematic, for this reason the LNB block provides for a frequency down conversion in a lower band so that normal coaxial cables can be used.
The following image shows the basic scheme of the LNB block: there is a first RF amplification stage, followed by the mixer which multiplies the RF signal with the signal generated by a local oscillator (LO). The resulting signal contains the sum and difference frequencies, the next filter eliminates the high frequency sum components to let pass only the frequencies in the band of interest, called intermediate frequencies (IF), which are further amplified by another amplifier stage. In practice it is a heterodyne scheme, in which the frequency of the local oscillator is fixed. 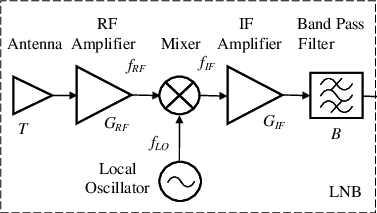 The LNB block we use is Invacom’s SNF-031 model which has low noise and good stability of the gain parameters with respect to variations in operating temperature. The actual antenna is located inside the waveguide which has a C120 flange on the outside to which the feed horn is fixed, which has the task of collecting the waves reflected by the dish and conveying them to the inside the waveguide.

The following images show the LNB block with its feed horn fixed to the focus of the dish. 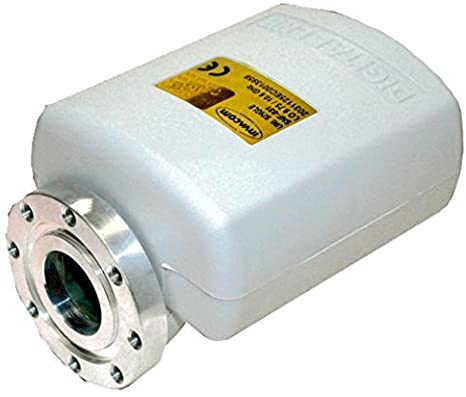 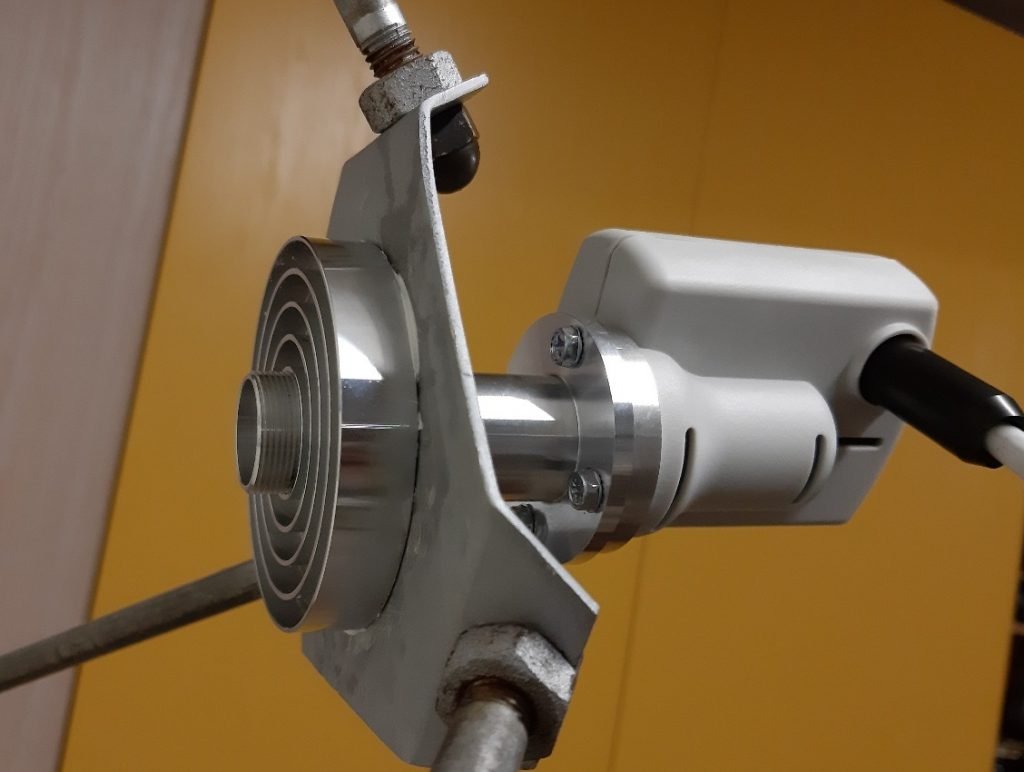 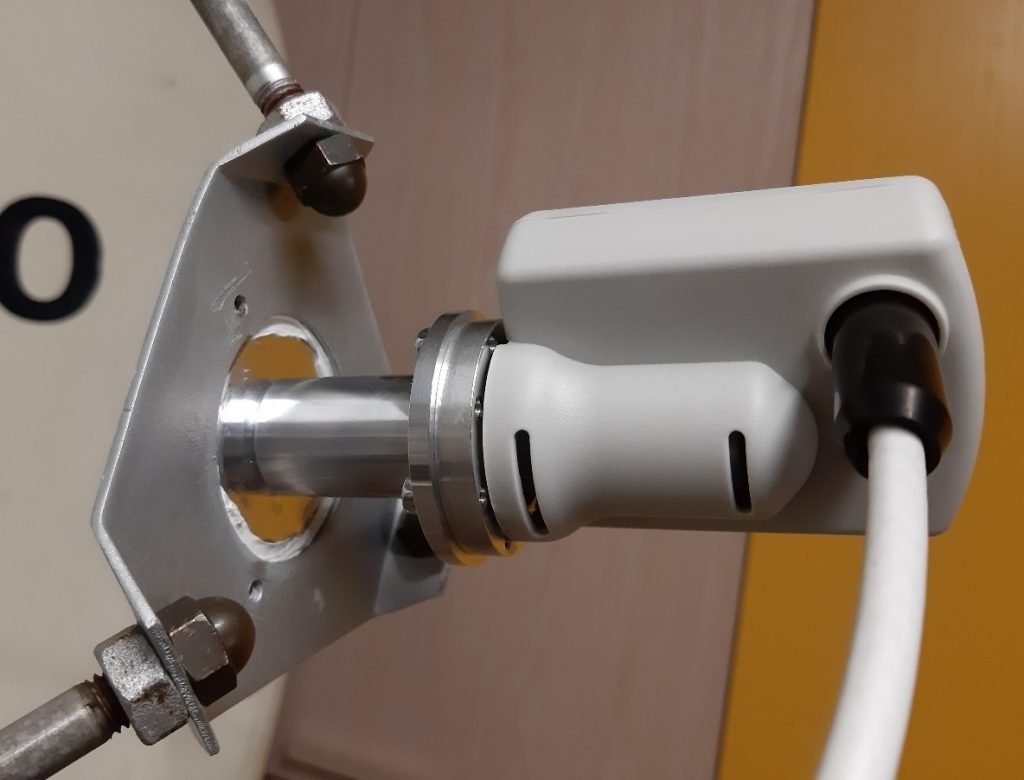 The receiver consists of the few components, shown in the following image: there is a bias-T for feeding the LNB block, a bandpass filter centered at 1420 MHZ, a wide-band amplifier and the Airspy R2 SDR receiver. The “hardware” part has the function of limiting the receiving band and giving the signal a second amplification after the LNB stage. The signal is then acquired by Airspy and subsequently processed for the determination of the total power using GNURadio software. The radiometer function is practically realized through software. 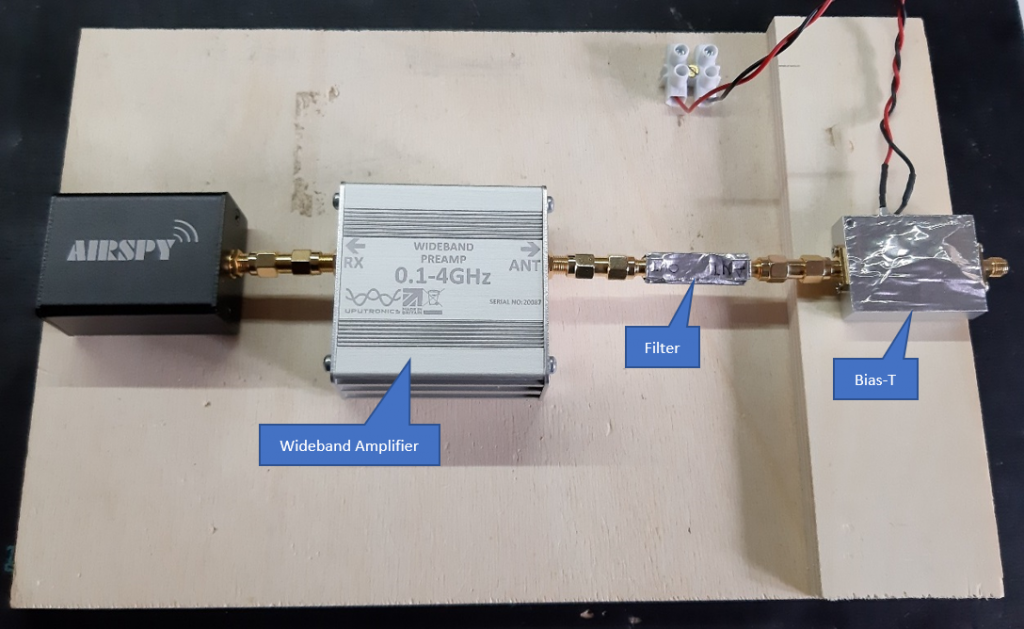 The Bias-T has the function of “injecting” the supply voltage to the LNB block along the coaxial cable. In practice it is a simple circuit with a coupling capacitor to filter the DC component towards the RF side and an inductance at the DC input. Obtained on eBay, it can be easily self-built but attention must be paid to the “RF” quality of the components and the shielding. 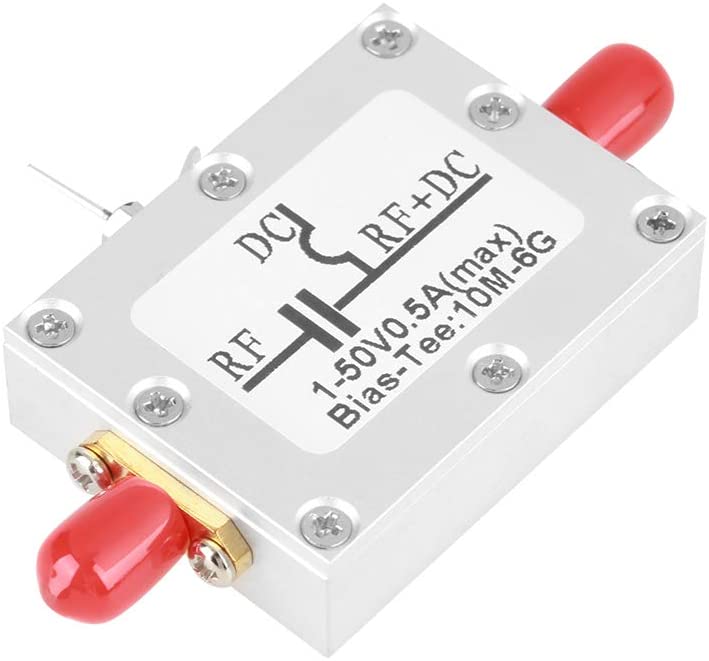 This filter is dedicated to amateur radioastronomers interested in the hydrogen line observations. It uses the TA2494A SAW component and measures only 50 x 10mm. It features edge pads for an easy soldering of a RF shield. Insertion loss is typically less than 3.5dB and bandwith 80MHz.

In the images below we show the unit and its frequency response. We have soldered two wires between the SMA female headers and we wrapped the filter with aluminum tape in order to shield the filter. 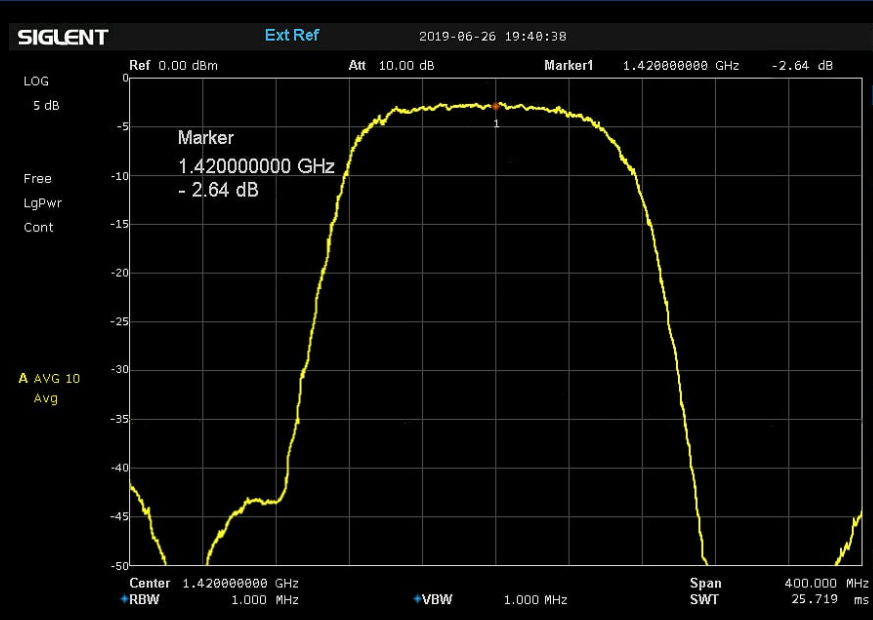 This unit HAB-FLTNOSAW built by UPUTRONICS is a preamp designed to go between a software defined radio receiver and an antenna. The LNA used inside is a MiniCircuits PSA4-5043. This particular model has the SAW filter removed to cover the 0.1MHz to 4GHz. There are 2 options for powering the unit : either by the USB header or via bias-tee. Devices such as the Airspy can enable bias-tee and power the device. Alternatively any mini USB cable can be used to power the device. We chose to power the unit via USB line.

In the images below we show the unit and its frequency response. 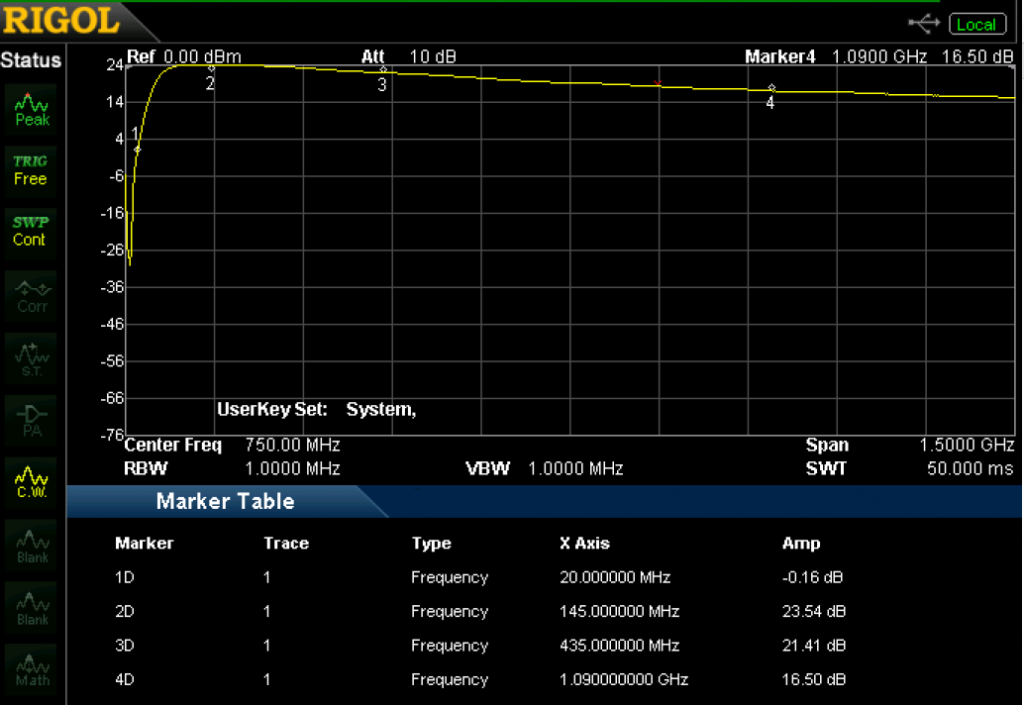 From the manufacturer’s site : The Airspy R2 sets a new level of performance in receiving the VHF and UHF bands thanks to its low-IF architecture based on the Rafael Micro R820T2 chip and a high quality 12-bit Oversampling ADC and state-of-the-art DSP. In Oversampling mode, the Airspy R2 applies analog RF and IF filters to the signal path and increases the resolution up to 16 bits using software decimation. Coverage can be extended to HF bands via the up-converter companion SpyVerter (not used by us). Airspy R2 is 100% compatible with all existing software, including the SDR # scan standard, but also with a number of popular software-defined radio applications such as SDR-Radio, HDSDR, GQRX and GNU Radio. The stability and precision of the clock for the local oscillator, given at 0.5ppm, is also important for our application.

In the configuration of the device (done through the osmocom driver in GNU radio) the RF gain is set to 0 (default setting), while the IF and BB gains are each set to 10 dB. These very low gain values ​​show the effectiveness of the components placed upstream of the receiver : from the antenna to the LNA and Wideband amplifiers. The bias-T option is also disabled. 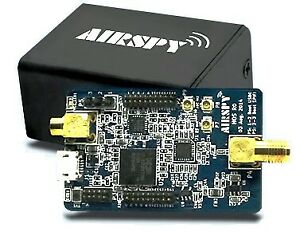 We have described the construction of a small and inexpensive microwave radio telescope. We took advantage of the wide availability of radio components for satellite TV. The radiometer function, ie the actual measurement of the signal strength, will be implemented via software using the GNURadio framework : this will be the subject of the next post.