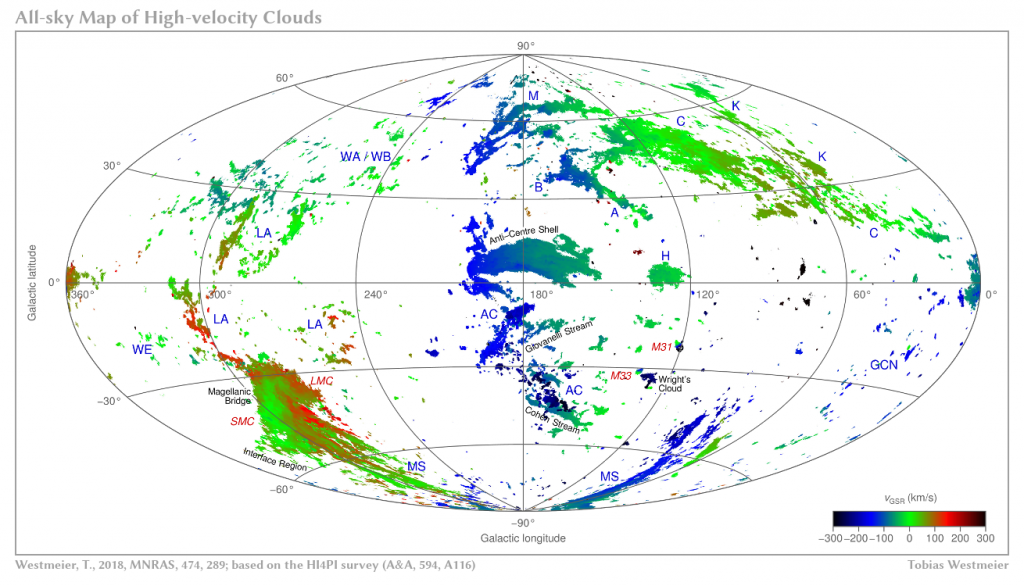 Abstract : in this post we continue the study of the emission of neutral hydrogen clouds with the antenna and receiver at 21 cm. We provide evidence of the possible detection of a high-speed cloud, we present a measurement of the emission from the galaxy made with the transit technique and finally we use one of the measurements to make estimates on the processes occurring inside the hydrogen clouds.

As we know, neutral hydrogen is concentrated in the plane of the galaxy (approximately between galactic latitude +20° and -20°). However, clouds of neutral atomic hydrogen are also present “among the stars”, to a lesser extent and with a lower density. Among these are the so-called high velocity clouds, characterized by high speeds that do not fall within the range of galactic rotation speeds. However, the signal from these clouds is weaker and more difficult to observe with an amateur radio telescope. However, you can try to point the antenna towards one of the points where one of these formations is present (map shown in the image above – from Westmeier) and with a little luck and patience it is possible to detect the signal emitted by these formations. The spatial resolution of our radio telescope is very low but the frequency resolution is good and this allows us to easily distinguish different frequencies and therefore different speeds.

The graph below shows a survey made by pointing the antenna towards an area of ​​the galaxy with the presence of high-speed clouds. You can see the main peak at a speed close to zero and another peak corresponding to an approaching speed of about 200 Km/s. This could be a demonstration of the detection of one of these characteristic clouds. 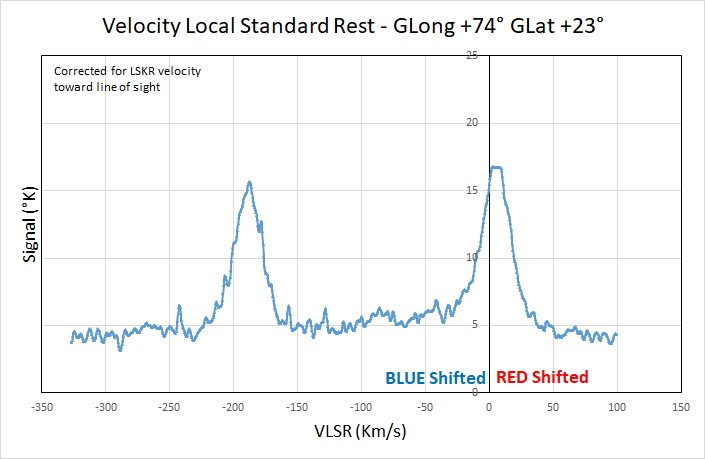 As a counter-test we show the graph obtained from the Hi Profile Search website which returns the velocity curve observed by entering the galactic coordinates: there is evidence of a minor peak corresponding to an approach speed of 150-200 Km/s. 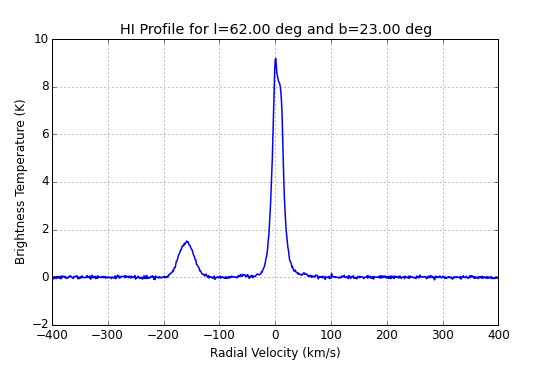 The simplest radio astronomy observation consists in determining how the intensity of the signal received by the antenna varies during the transit of a radio source in the field of view of the antenna. In practice, the antenna of our radio telescope is oriented towards the point of the sky where the transit of the radio source we want to study is expected and the signal obtained from the receiver is recorded: we have applied this technique to the radio observation of the Milky Way at the length of wave of 21 cm. The two screen-shots shown below, taken from Stellarium, show the initial situation on the left and the final situation on the right, while the red circle indicates approximately the area subtended by the antenna beam. The apparent movement of the Milky Way is a rotation from top to bottom

The image below instead shows the apparent path followed by the antenna during transit. 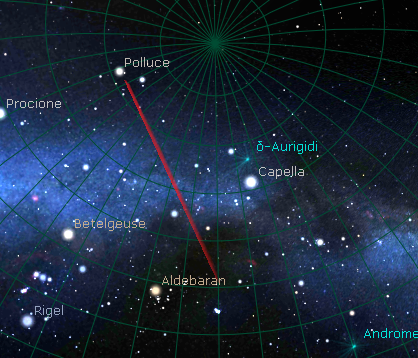 Our HW + SW system determines the signal power spectrum. During the transit, the system recorded the spectrum of the signal at regular time intervals. The graph below shows the spectra obtained over the course of about two hours. For each curve, the intensity of the maximum was determined and plotted as a function of time, as shown in the second graph where you can see the intensity profile that provides an indication of the quantity (density) of neutral hydrogen present.

The emission line of neutral hydrogen undergoes a spectral broadening. All emissions, atomic and molecular, are not infinitely narrow but have a broadening that depends on various physical processes. The “natural” broadening due to the uncertainty principle is very small and we can neglect it. The main physical processes that contribute to the broadening of our emission line are the collisions between atoms and the Doppler effect. Collisions between atoms are very rare, given the extremely low density, so even this contribution can be neglected. The Doppler effect remains, which is therefore the major cause of the broadening of the emission line.
The actual profile of the line (intensity normalized as a function of frequency) is therefore mainly determined by the Doppler shifts that reflect the radial velocities vr of the emitting atoms. The sign convention is vr> 0 for sources that move away from the observer. Radial velocities can be microscopic (from the thermal motions of individual atoms) or macroscopic (from large-scale turbulences, flows or rotations).
The broadening due to the Doppler effect produces a Gaussian profile. In the graph below we can see the measurement at a galactic longitude of about 180° in the direction of the galactic plane. The profile, corrected for the LSR speed, is centered on zero speed and is well approximated, at least for the positive part, by a Gaussian curve with FWHM = Δν ≅ 30 Km/s.
This value gives an estimate of the average speed of the turbulent motions that occur inside the neutral hydrogen cloud. We know that the contribution due to the kinetic temperature of the atoms is negligible compared to the contribution due to turbulent macroscopic motions. This is because, from other reasoning, we can deduce that the kinetic temperature of the atoms is practically of the same order of magnitude as the brightness temperature measured with the antenna : we are therefore at about 50-100 °K which correspond to rather low radial speeds. 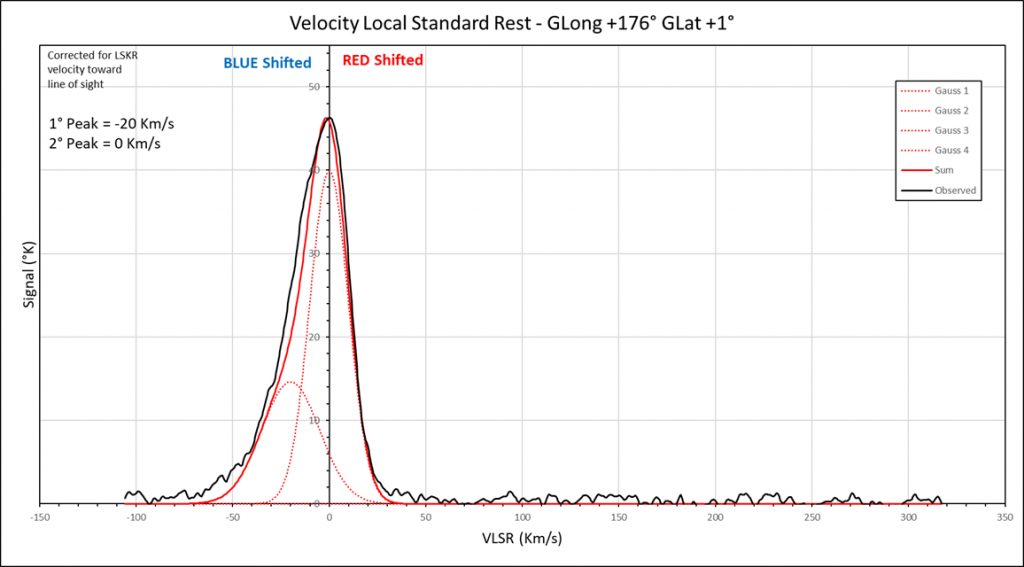 Even in the measurements described in this post, the 21 cm radio telescope gave us some satisfactions. The good resolution in frequency allowed to highlight a fast cloud outside the galactic plane and the study of the measurement made at longitude 180° allowed to obtain information on the internal dynamics of the clouds. The limit of our instrument is the low spatial resolution and the difficulty of precise pointing, you can partially overcome the problem of pointing by adopting the transit technique as we have seen in the scanning of the Milky Way. An increase in spatial resolution and an improvement in the support of the antenna would allow to automate the pointing operation and start a mapping of the sky, which is now not feasible with our current antenna.