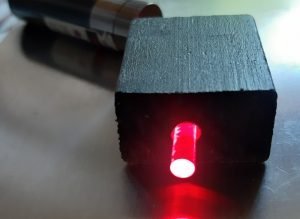 Abstract : ruby has a red spectacular fluorescence under violet or blue-green radiations with a doublet spectrum at 692.80 and 694.30 nm, which appears as a single line. In this post we study the fluorescence of ruby ​​and in particular its lifetime. We show that interesting results can easily be obtained even with our DIY low-cost instrumentation. 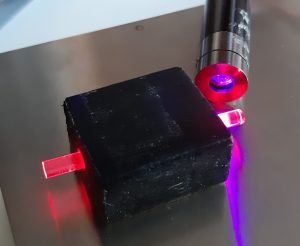 In the cover image and in the image aside we show our crystal excited with a 400 nm violet laser diode. The crystal emits strong red fluorescence. This emission is interesting because of its intensity, its narrow emission line (responsible for the luster and the color of the crystal) and because of the relatively long fluorescence lifetime.

The invention of the Ruby Laser by Theodore Maiman in 1960 initiated the era of photonics technologies. The operation of the ruby ​​laser is based on optical and fluorescence properties of ruby which allow to obtain a population inversion in a three-levels laser scheme. 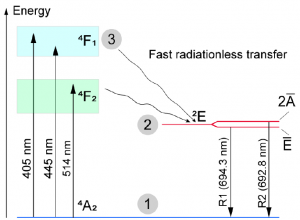 Sapphire, ruby, and pure corundum are α-alumina, the most stable form of Al2O3, in which 3 electrons leave each aluminium ion to join the regular octahedral group of six nearby O2− ions; in pure corundum this leaves all of the aluminium ions with a very stable configuration of no unpaired electrons or unfilled energy levels, and the crystal is perfectly colorless.
When a chromium atom replaces an occasional aluminium atom, it too loses 3 electrons to become a Cr3+ ion to maintain the charge balance of the Al2O3 crystal. However, the Cr3+ ions are larger and have electron orbitals in different directions than aluminium. The octahedral arrangement of the O2− ions is distorted, and the energy levels of the different orbitals of those Cr3+ ions are slightly altered because of the directions to the O2− ions. Those energy differences correspond to absorption in the ultraviolet, violet, and yellow-green regions of the spectrum. Thus the dopant element chromium Cr3+ in ruby can be excited to high energy levels by absorbing visible light. When the excited Cr3+ returns to ground state through a meta-stable intermediate energy level, the ruby emits red light as fluorescence at 694nm.

A synthetic ruby sample was purchased from an online vendor. It is a ruby rod for laser, with dimensions 3,5mm x 45mm. The crystal was made in Russia in the 1980s. The crystal is perfect and the surfaces are of optical quality. Ruby characteristics, including emission lifetimes, can vary from sample to sample depending on the Cr3+ ion concentration. The technical data of our crystal declare a ion concentration of 0.020%, while the value can vary, from sample to sample, between a minimum of 0.013% and a maximum of 0.036%. The image below shows our crystal. 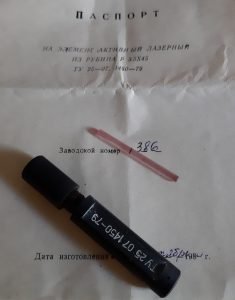 The first activity was to obtain the spectrum of the ruby ​​fluorescence. The crystal can be excited with a violet diode laser that emits at 400 – 410 nm. The absorption of the crystal at this wavelength is strong and so is the fluorescence. We used our DIY diffraction grating spectrometer, described in this post : DIY Diffraction grating Spectrometer.
The spectrum is shown below : on the left there is excitation at 410 nm and on the right there is the red emission at 694 nm. It is noted that the emission line is very narrow. The fluorescence emission actually consists of two very close lines but our spectrometer is not able to resolve them.

The fluorescence lifetime is an important parameter both for its physical meaning and for the laser application. The time when the signal decreases to 1/e of its initial intensity is defined as lifetime Δt. The inverse value of it is the Einstein coefficient for spontaneous emission. Usually the fluorescence lifetime is very short, nanoseconds or picoseconds, and its measure is a quite difficult technical challenge. In the case of ruby the emission lifetime is relatively long, milliseconds, thus its measure is quite easy. We adopt two different equipment : a photon counter and a photodiode. In both cases we excite the crystal with a violet laser pulse and we measure the emission light in a “time resolved” manner. The scheme below shows the setup.

The photon counter consists of a photomultiplier with threshold operation that provides an output for each photon detected. The impulses are counted with electronics based on a PSoC type microcontroller. The photon counter was described in the post Light as a Particle, while the electronic part was described in the post PSoC based Photon Counter. The image below shows the setup placed inside a light-tight container, on the left the box with the photon counter, in the center the ruby ​​crystal and on the right the laser and its driving circuit. 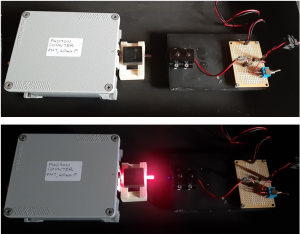 The count of the impulses produced by the photon counter is done in “time gated” mode : in practice, an enable impulse signal is sent to the counter which enables the circuit to count only when this signal is ON. Experimentally we have seen that the most suitable counting window is 100μsec, with a repetition frequency of 2.5KHz (period = 0.4msec). The “time gate” signal is produced by a signal generator. The results of the counts, one sample every 0.4 msec, are sent, via serial connection, to a Raspberry Pi which constitutes the Data Collector of the experiment. The image below shows the signal generator and the counter. 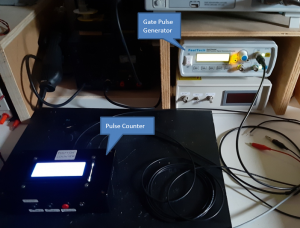 With our device we have acquired a series of data that we can see below in graphic form. The initial plateau of about 15msec is produced by the excitation laser pulse (lasting 10msec) which drives our counter into “saturation”. After about 15msec from the beginning of the impulse the light intensity recorded by the counter begins to decrease : this is the exponential decay of the fluorescence emission.
In the second graph we have isolated a central part of the curve in order to obtain a more precise exponential fitting : the correspondence is very good and the time constant of the exponential curve is τ = 3.75msec.

In the second test, a photodiode was used to measure the light intensity. Our photodiode photometer was described in the post PSoC based Photometer.  The images below show the setup. 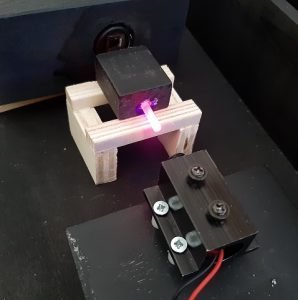 The signal produced by the photodiode and subsequently amplified was acquired with an oscilloscope in which we compare the laser ignition pulse with the signal obtained from the photodiode. It is clear that the intensity of the ruby ​​fluorescence decays exponentially immediately after the excitation laser turns off, with a time constant of about 4msec. 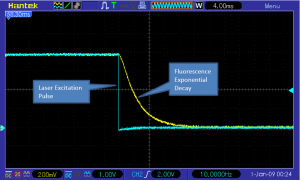 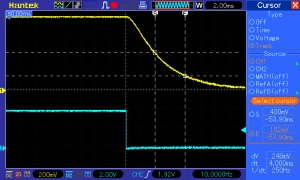 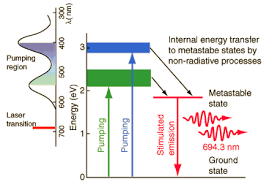 The ruby crystal and its properties are the core of the first built laser. It is known that the laser process requires a population inversion. That means that the number of excited atoms with energy E2 must be greater than the atoms at ground state. Because the laser end level is the same as the start level a population inversion should not be possible. However, it turned out, that the level E2 is a so called metastable state and the probability of optical transition from here down to the ground state are is quite low (this is the reason of the long fluorescence lifetime).
That means that the lifetime of the level E2 is that high, that for a short moment, with high intensity pumping, a population inversion can be maintained. The starting lasing process significantly depletes the population of level E2 by stimulated emission and consequently ceases the population inversion. That is the reason why the Ruby laser operates in pulsed mode only.

The extra-long fluorescence lifetime is the reason of the narrow emission line : the theoretical laser-line width Δω = 1/τ is 286Hz only, which explains why the ruby laser is still the best for some applications like holography.

Ruby fluorescence analysis allowed us to explore many aspects related to the physics of fluorescence and its implications in the laser field. The instrumentation used is all DIY type but this was not a limit because it allowed us to use it with the in-depth knowledge deriving from the experience gained during self-construction. This activity forms the basis for any future self-construction projects for a ruby ​​laser.