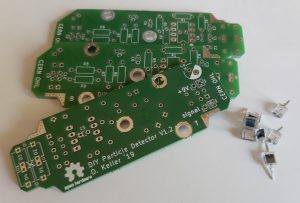 Abstract : in this post we describe the construction and testing of the “DIY Particle Detector” developed at the CERN S’Cool LAB. It is a detector based on the BPX61 photodiode (mainly for alpha particles) and on the BPW34 photodiode (mainly for beta particles). The detector uses easily available and low cost components and the PCB can be ordered online. The device is designed for self-construction within educational projects on physics. Despite the constructive simplicity it allows to obtain interesting results in the detection of radioactivity, it can distinguish different particle types (alpha particles and electrons) and measures their energy between 100 KeV and 8 MeV.

Silicon solid state detectors are widely used in the detection of radiation and in the measurement of the energy of the particles, in this blog they have been the subject of numerous posts in which we have described physical properties and applications in the field of ionizing radiation detection. 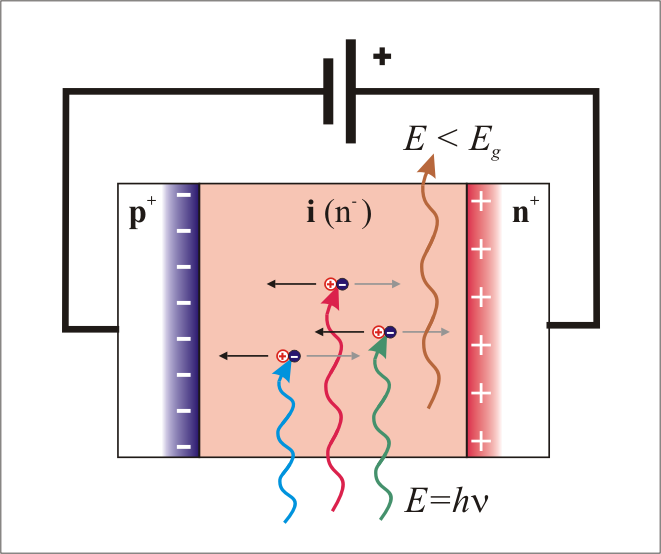 Let us briefly recall the main concepts. In a semiconductor, the equivalent of the ionization energy is the band-gap energy to promote an electron from the valence to the conduction band. In Si at room temperature, Eg = 1.1 eV, compared to ~15 eV to ionize a gas. A charged particle moving through Si therefore creates more ionization and a larger signal.
When n-type and p-type silicon are put in contact, creating a p-n junction, the flow of the two different free charges across the boundary creates a depletion zone, an electrically neutral area near the junction where an internal electric field sweeps out any free charge. By reverse biasing the junction, the depletion zone can be made large, ~hundreds of microns. If an energetic charged particle ranges out in the depletion zone, an amount of ionization proportional to the particle’s initial energy will be created there, and swept out. By plating metallic ohmic contacts on the outer surfaces of the crystal, it is possible to both apply the bias and collect the free charge from the depletion zone, so that the whole assembly is a high gain, solid state version of the capacitive ionization chamber.

The beta particle detection version is equipped with four PIN photodiodes of the BPW34 type, while the alpha particle version uses a PIN BPX61 photodiode. The BPW34 chip is encapsulated in a transparent resin and cannot be used for alpha particles because these are blocked by the plastic coating, the BPX61 chip can instead be exposed by removing the protective glass. The operation is not difficult but it is a bit delicate, with pliers the metal case is bent producing four notches and thus breaking the slide, placing the component upside down, the glass fragments will fall, it is not recommended to remove the fragments with pliers because you risk damaging the chip. In the proposed circuit the diodes are inversely polarized at a value of about 8V, at which the emptying zone is about 50 μm. The maximum reverse bias voltage is 30V.
The images below show the photodiodes.

The reading electronics is based on a charge pre-amplifier followed by a signal amplifier. the TLE2072 chip was used, which contains two JFET op-amps characterized by low noise and high speed, therefore suitable to be applied to the reading of the photodiode signal. The diagram below is relative to the detector with BPX61 for alpha particles; the scheme for the detector with the BPW34 is the same but the values ​​of some components are different. The feedback capacity of the charge pre-amplifier is the same, 5pF, but the discharge resistance is different : 40M in one case, 10M in the other; the time constant for the alpha detector is 200μs while for the beta detector it is 50μs. In general, the detector with the BPX61 has a lower amplification, this because alpha particles generate a strong signal, this makes the alpha detector less sensitive to noise and disturbances.
Operational amplifiers are used with a single power supply (9V from battery), the signal level is then translated to positive values ​​in order to prevent it from becoming negative. At the output of the second amplifier, which is in an inverting configuration, a low pass filter is placed which rounds the impulse and makes it easily acquired by a slow ADC like that of a sound card. 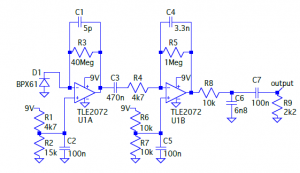 The circuits with photodiodes have been placed inside a metal box (to reduce electromagnetic disturbances) and light-tight to prevent light from reaching the sensitive surface of the photodiodes. The image below shows the two versions of the detector, with BPW34 and BPX61, inside our die-cast aluminum box. 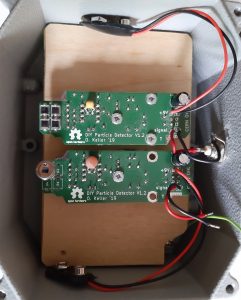 To test the detectors we used two “sample” sources: 0.1μCi of Sr-90 for beta particles and 1μCi of Am-241 for alpha particles; the source of Am-241 was partialized by covering it with adhesive tape and making a small hole in the tape to reduce the count. The image below shows the two sources.

Both detectors work well and have proven to be quite sensitive to both beta and alpha particles, while sensitivity to gamma radiation is very low. The pulses are of negative polarity and have an amplitude of about 50 – 100 mV and have moderate overshooting. 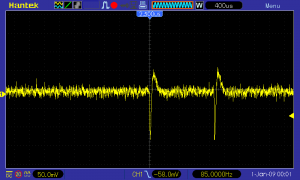 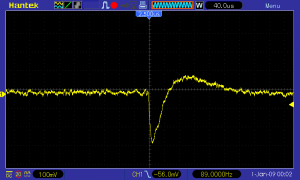 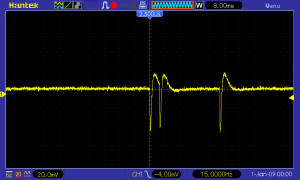 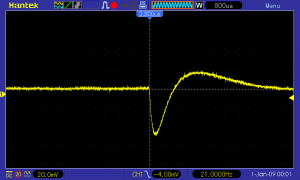 The detector proposed by CERN’s S’Cool LAB is very interesting because it allows you to study alpha and beta radioactivity using low-cost and easily available components. Construction and assembly are not critical and can also be completed by beginners. The natural further development of the detector is the acquisition and digitalization of the impulses via sound card and special software in order to obtain the energy spectrum of the examined source.