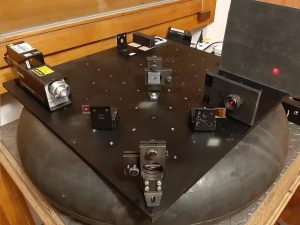 Abstract : with the same setup used for the Michelson-Morley interferometer we made the Mach-Zehnder configuration. The purpose of this post is the description of the construction of the apparatus and its use for simple interferometry experiments.

The Mach-Zehnder interferometer is a type of beam division interferometer, consisting of two mirrors and two beam splitters. The light inside the system travels two different paths and recombines downstream of the second beam splitter producing an interference pattern dependent on the phase difference between the two waves. The phase difference (or the equivalent optical path) can be introduced by a small asymmetry in one of the beam splitters or in one of the two mirrors. Since the two paths are separate, this interferometer is much more difficult to align than the Micheloson-Morley interferometer. Its applications are numerous : generally an object is inserted along one of the two paths, for example a glass slide, which produces a difference in the optical path and therefore a movement of the interference fringes. By counting the fringes, the difference in optical path can be calculated and, for example, the refractive index of the interposed medium can be calculated.
The following drawing shows the interferometer scheme.

In the Mach-Zehnder interferometer, unlike the Michelson-Morley interferometer, each beam follows a different path, and then recombines downstream of the second beam splitter. This is the main difference, however the general theory of interference remains valid: the interference is due to the coherent superposition of the two waves.
The “outputs” of the Mach-Zehnder apparatus are two : one parallel to the incoming beam and the other orthogonal. If we examine the parallel output we see that the two beams both arrive after having undergone two reflections, then they both arrive in phase having both accumulated a phase shift of 2π that is a wavelength. For the orthogonal exit instead, a beam arrives after three reflections, while the other after a single reflection, the two beams are therefore out of phase with π and therefore give rise to destructive interference.
If a beam, in one of the two paths, undergoes a phase shift equal to ΔΦ, this reflects on the intensity of the resulting beam: the parallel beam will have cos2ΔΦ/2, while the orthogonal beam sen2ΔΦ/2, as shown in the figure below. 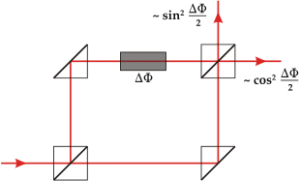 For the construction of the interferometer we used the same materials described in the previous post Michelson – Morley Interferometer, it is a pair of mirrors, a pair of plate beam splitters, a He-Ne laser and a beam expander (piece of binoculars), all mounted on our DIY optical bench. The image below shows the complete setup.

With a little patience, the interferometer is aligned. This is a rather delicate operation because it is necessary to make the laser beams on the different paths parallel to each other. When the instrument is perfectly aligned, the interference fringes appear on the screen placed after the second beam splitter. The interferograms obtained in the two directions, the parallel one and the orthogonal one, are complementary to each other, as we have also seen in the previous paragraph : a maximum corresponds to a minimum and vice versa. 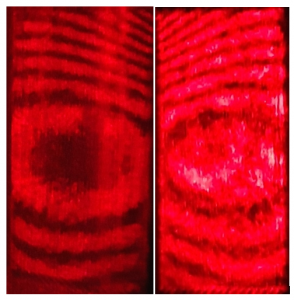 This interferometer cannot be used for the measurement of displacements, as in the Michelson-Morley interferometer, however it can be used profitably for the detection of changes in the refractive index on one of the optical paths, therefore it is suitable to be used as a sensitive detector of substances or physical phenomena where the latter cause a variation of the refractive index. In recent years, Mach-Zehnder interferometers integrated on chip or fiber optic have been designed to build sensitive detectors.

In our apparatus this has been qualitatively demonstrated by inserting a heat source, such as the flame of a candle or the stylus of an electronic soldering iron, inside one of the arms in order to heat the air and introduce a modification factor of the refractive index. In this way the interference fringes move and arrange themselves in a different pattern due to the local changes of the index n.