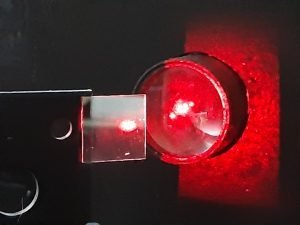 Abstract : the purpose of this post is to describe the construction of a simple “amateur” Michelson-Morley interferometer. The Michelson-Morley interferometer has a place of absolute importance in the history of physics, having been used in the famous experiments carried out to demonstrate the existence of the ether. It is still used as a technological solution for refined instrumental measurements. Very recently it has returned to “vogue” because it constitutes the instrument used in the detection of gravitational waves. The Post presents the construction of the apparatus and how to obtain the interference fringes. Two applications “within reach” of our instrument are also shown : the detection of vibrations and the measurement of the refractive index of glass.

The Michelson Interferometer, by inventor Albert Abraham Michelson, is the most common type of interferometer. The interference pattern is obtained by dividing a photon beam into two distinct beams, these are directed on different paths and then converged again. The two paths will have different lengths or will include different materials, in order to produce a phase shift in the optical path.
The image below shows the basic diagram of the interferometer. 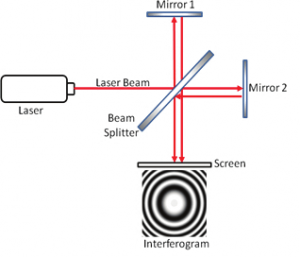 The Michelson interferometer scheme is also used for detecting the passage of gravitational waves in large and sophisticated observatories, like LIGO and VIRGO. The very small deformation of space caused by the passage of a gravitational wave causes a small difference in the optical paths of the laser beams in the two arms of the interferometer. This difference is measured by optical sensors that detect changes in the interference fringes.
Of course, if the operating principle is relatively simple, the experimental realization is not as simple : these apparatuses are enormous and have required years of work to reach the sensitivity required by this type of observation. Below is the diagram of the LIGO / VIRGO interferometer. 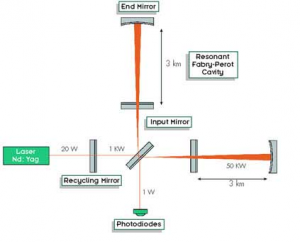 The interference is simply due to the coherent overlapping of the two waves : when they are in phase the resulting wave has amplitude equal to the sum, when they are out of phase the amplitude is smaller and in particular when they are in the counter phase the resulting wave has amplitude null. As seen in the image on the side.
In order for interference to take place, the two beams must maintain the phase difference in space and time : when this occurs, the light used is said to be coherent, for example the light produced by a laser is highly coherent.

Of course the sensors (also our eye) are sensitive to the wave intensity, proportional to the square module of the amplitude :
I ∝ |E|2 where |E|2 = E*E*
By doing the calculations we get I ∝ I0cos2(kΔx/2) = I0cos2(πΔx/λ)
where k : wave number, λ : wavelength, Δx : path length difference

By varying Δx, a variation (movement) of the interference fringes displayed on the screen (or measured with the sensor) is thus obtained.

In static conditions, i.e. without changing the length of the paths, and with the instrument well aligned, the pattern of the interference fringes is circular : in practice, a set of concentric rings that become thinner and more numerous moving away from the center. The reason of the circular fringes is easily understood if we refer to the diagram below. 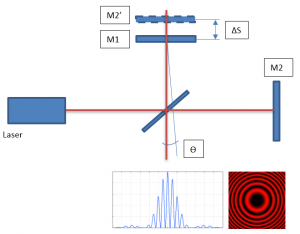 The mirror M2 is seen as if it were the virtual mirror M2 ‘, the distance between M1 and M2 is ΔS. Moving laterally with respect to the direction of the beam, by an angle θ, there is a difference in the optical path of the two beams, because one comes from M1 and the other comes from M2 ‘, this difference is : Δx = 2*ΔS*cosθ, in terms of optical path δ = k*Δx = (2π/λ)*(2*ΔS*cosθ).
As the angle θ changes, the optical path also varies and the conditions for the maximum and minimum interference are obtained, thus producing the characteristic circular fringes. 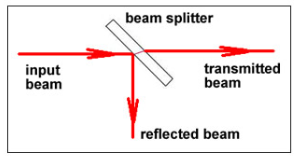 For the construction of the interferometer it is necessary to have a rigid surface on which to place the optical elements, the ideal is an optical bench like the one described in the post DIY Optical Table. The basic component of the instrument is the beam splitter, it is an optical device that divides a beam of light into two parts. The beam splitter can be made with two prisms glued together or with a semitransparent mirror, as shown in the figure on the side. 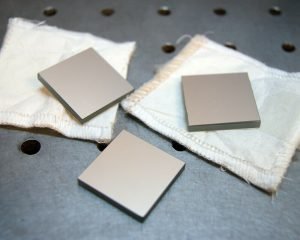 For our interferometer we used a non-polarized semitransparent mirror.
The other component of the interferometer are the mirrors. It is preferable to use “first surface” mirrors, these mirrors have the reflective surface deposited above the support, unlike the conventional mirror, in which the reflective surface is placed behind the transparent substrate such as glass or acrylic. In this type of mirrors the secondary reflection that occurs on the glass surface is absent.
Of course, mirrors and beam splitters must be positioned on suitable supports, the mirrors must be adjustable so that the beams can be aligned.
As a light source we used a He-Ne laser, the beam of which is expanded with a pair of lenses. The image below shows the interferometer on the optical bench. 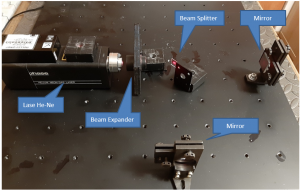 To reduce vibrations, we placed the optical bench over an inner tube, as seen in the following image. 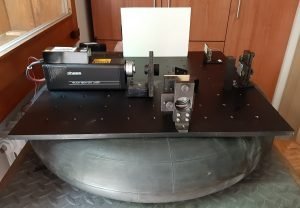 The interferogram can be viewed on a screen or it can be detected with an optical sensor such as a photodiode, the image below shows the setup of our photodiode.

The image below shows the optical bench with the interferometer and the photodiode, in which the paths of the laser beams are highlighted. 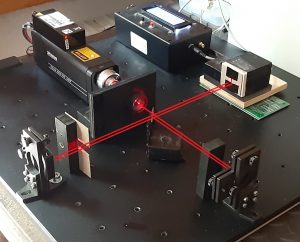 This is a typical interferogram : the “bull’s eye”. 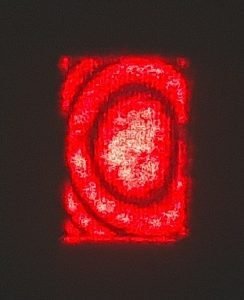 The interferometer can be used as a sensitive vibration detector. The vibrations transmitted on the optical bench or on the mirrors cause variations in the length of the interferometer arms which in turn cause the movement of the interference fringes which can be measured for example with a photodiode. The trace below shows the signal detected by a photodiode following a slight vibration transmitted to the optical bench. 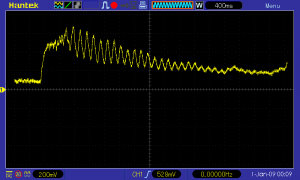 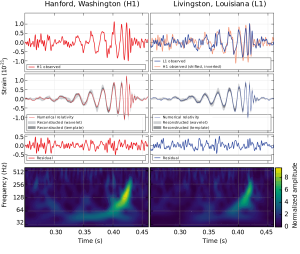 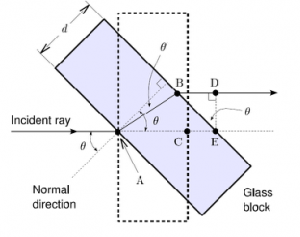 The interferometer is also used to make precise measurements of the refractive index of a transparent material. We used it for measuring the index n of a glass microscope slide. By placing the slide in one of the interferometer arms and rotating it with respect to the direction perpendicular to the beam, we obtain a variation of the optical path because the length of the light path inside the glass varies, as shown in the image aside. Knowing the thickness of the slide, the wavelength of the laser light, the refractive index of the air and applying Snell’s law on refraction and the appropriate geometric considerations, the index n can be obtained as a function of the number of fringes of interference that have moved across the screen. The image below shows the slide setup. 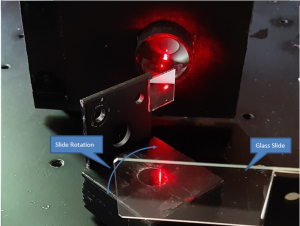 The data are the following :

We made 3 measurements (m: number of interference fringes):

For a mean value n = 1,56. All in all, considering our apparatus, the result seems more than appreciable to us.