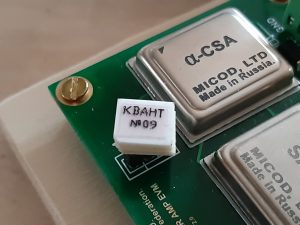 Abstract : in this post we examine a solid state radiation detector. It is a silicon structure that follows the PIN diode scheme and is optimized for the detection of gamma radiation. After a brief introduction on the PIN structure technology, we go on to describe the front-end electronics used for the acquisition of the impulses. In the last part we show some examples of impulses and the results of the tests carried out. 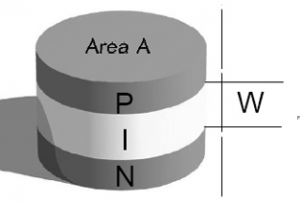 A PIN diode (p-type, intrinsic, n-type diode) is a diode with a wide region of intrinsic semiconductor material (undoped) contained between a p-type semiconductor and an n-type semiconductor.
The advantage of a PIN diode is that the depletion region exists almost completely within the intrinsic region, which has a constant width (or almost constant) regardless of disturbances applied to the diode. The Intrinsic region can be made large as desired, by increasing the area in which the pairs of gaps can be generated.
The generation of charge carriers within the intrinsic region may be due to the radiation incident. For these reasons, many photosensors are based on a PIN diode. In addition to the light radiation, the charge carriers can also be generated by particles, gamma radiation, X radiation : for this reason, a PIN diode can also be used as a solid state radiation detector.

The ionizing particle enters into the sensitive area of the photodiode and produces in its passage several hundred electron/hole pairs which are collected by the cathode/anode of the diode and produce the signal.
We give some data from the literature on solid state sensors :
Silicon Bang Gap = 1,115 eV
Couple Production Energy  e/h (300°K)  = 3,62 eV
Electron ionization power = 80 e/μm

In the image below you can see the “Kvant” detector based on a PIN diode we received from Micod (detector built by AlexDetector). 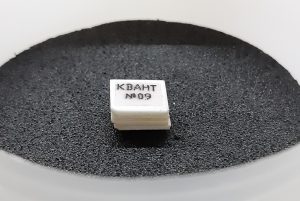 The detector consists of a silicon diode (1mm3 size) inserted inside a ceramic support, as seen in the drawing below: 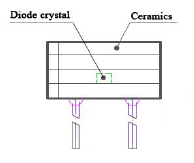 Being a PIN diode, the detector must be used by polarizing it inversely. The datasheet gives 60V maximum polarization voltage, while the capacitance of the sensor, very limited, is only about 1.5pF. The dark current depends on the Vbias and varies from 0.1nA up to a maximum of 100nA.
By increasing the reverse polarization voltage we get the advantage of decreasing the capacitance of the diode but we increase the dark current : the working polarization of the sensor is placed “halfway” at about 30V.

To measure the current pulse produced by the detector it is necessary to have an “amplifier chain” composed by a charge sensitive amplifier (CSA) followed by a shaping amplifier (SA). We used the α-CSA and SA components always supplied by Micod.
The matching between the detector and preamplifier defines the noise level of the spectroscopy system, therefore for these applications the best noise performance of the associated preamplifier is required.
Generally, a field effect transistor, FET, is used as the input device. The charge sensitive preamplifier uses a feedback capacitor Cf and, in this case, a feedback resistor Rf. The feedback capacitor is charged by the injected signal from the detector and discharged immediately through the feedback resistor. A drawback of the feedback resistor is that it is an additional source of noise.
When ionizing radiation or a particle strikes the active area of the silicon PIN detector, the charge sensitive amplifier (CSA) receives a charge Q in its input, converts it to a voltage pulse and then amplifies it. The output signal from CSA has a sharp front and exponential decay. The amplification factor of the circuit is:

After the CSA it is necessary to send the signal to a shaper amplifier (SA) which processes the pulse to amplify it and reshape it to obtain a quasi-Gauss shaped output signals. The shaper amplifier enhances essentially the signal-to-noise ratio and enables the signal to be sent to a counting device or to an analog-to-digital converter to acquire a spectrum. The Micod SA has a shaping time of about 10 μs.
The image below shows the modules, on the right the α-CSA module used with the Kvant detector, on the left the alternative CSA 250 module. The best results were obtained with the α-CSA module. 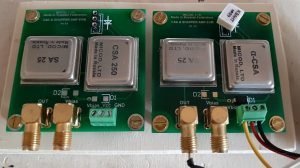 Same setup with a sample gamma source in contact with the detector. 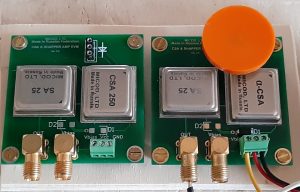 The impulses produced by the detector are very weak and therefore require high amplifications and above all the best signal/noise ratio. For this reason, it is good to insert all the electronic part inside a metal box in order to shield the circuits from any electromagnetic disturbances. Even a “used” aluminum box can be right for us, as seen in the image below. 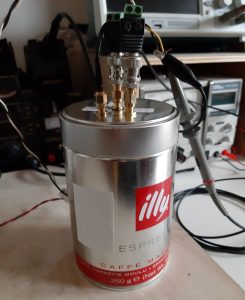 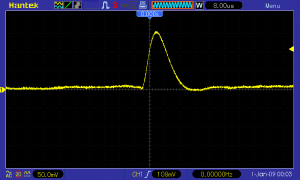 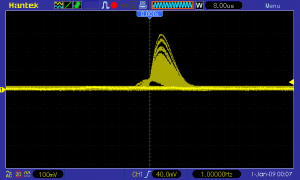 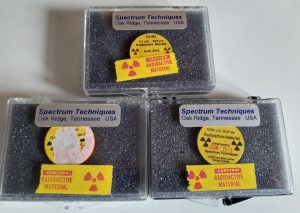 The sample source has been put into contact with the detector, inside the metal box, the output of the amplifier chain has been connected to the counter, threshold set to 30mV, as shown below. 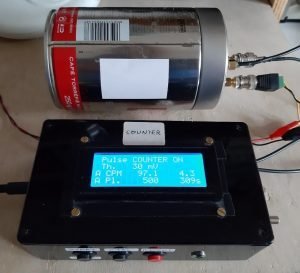 The counting results are the following :

Note the rather high value obtained for the beta source. The PIN detector is very sensitive to beta radiation and the ceramic coating is not a screen so efficient as to block it completely.

We tested the new detector “Kvant”, based on PIN diode, with two gamma sources and one beta source. The results are interesting, the detector is sensitive to both gamma and beta radiation. Given the small size of the crystal and the intrinsic characteristics of the silicon, the sensitivity on the gamma is relatively reduced while it is higher for beta radiation.
The sensor has been coupled with the Micod charge amplifier. The integration of the sensor with the front-end electronics, in a single device, would allow the creation of a good “pocket” detector for gamma and beta radiation.

The response of the sensor to other radiation such as neutrons or hadrons (heavy ions) remains to be tested to verify its use even in these cases.