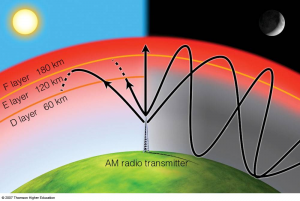 Abstract : in this post we present a system for monitoring sudden ionospheric disturbances (SID) events. As is well known, SID events are caused by the impact with the ionosphere of solar radiation emitted during solar flares. Monitoring SID events is therefore an indirect way to monitor solar activity. SID events heavily modify the ionosphere and therefore can be detected by measuring, over time, the intensity of radio propagation in the VLF band. In our system we used the VLF receiver proposed by the UKRAA (UK Radio Astronomy Association).

When a solar flare occurs on Sun a blast of intense ultraviolet and x-ray radiation hits the day-side of the Earth after a propagation time of about 8 minutes. This high energy radiation is absorbed by atmospheric particles, raising them to excited states and knocking electrons free in the process of photo-ionization. The low altitude ionospheric layers (D and E region) immediately increase in density over the entire day-side. The ionospheric disturbance enhances VLF radio propagation. Scientists on the ground can use this enhancement to detect solar flares; by monitoring the signal strength of a distant VLF transmitter, sudden ionospheric disturbances (SID) are recorded and indicate when solar x-ray flares have taken place. 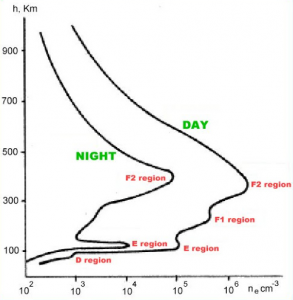 To understand the SID effect it is essential to remember how Earths’ ionosphere is created and structured. One may see the the ionosphere as a shell of electrons and electrically charged ions (atoms and molecules) that surrounds the Earth, stretching from a height of about 60 km to more than 1000 km. The main constituents of the ionosphere are neutral atoms and molecules. However, the charged nature of the ionosphere is due to production of plasma (electrons, ions) primarily by solar ultraviolet radiation. This again means that the ionosphere is ‘produced’ during the day and is ‘reduced’ during the night due to recombination processes of electrons and ions. Ionization depends primarily on the Sun and its activity. The amount of ionization in the ionosphere varies greatly with the amount of radiation received from the Sun.
The structure of the ionosphere (layers or regions) is related to the neutral gas species populating those regions and the energy of the radiation penetrating into Earths’ upper atmosphere. The higher energized the radiation is the lower it may penetrate and produce electrons and ions. The electron density profile (image above) shows the different ionospheric regions during day (production of electrons) and night (recombination of electrons). The image below shows the layers of the ionosphere during night and during day. 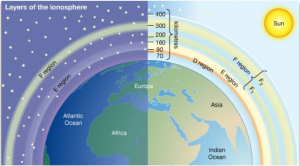 Effects related to terrestrial radio communication (ionospheric or sky-waves) are due to the existence of the D and E region – also called Kennelly-Heaviside layer.

The radio signal from the VLF transmitter reaches the receiver by two paths. One of these runs along ground and is called the “ground-wave”, the other is via “reflection” from the ionosphere, called the Ionospheric-wave, often known as the “Sky-wave”. These two paths are of different lengths, and lead to the formation of an interference pattern. The different path lengths for the two signals means that the phases of these signals will differ at the receiver. The phase difference depends on the distance between transmitter and receiver and could lead to a cancellation or to a reinforcement.
In daytime the Sky-wave is attenuated by the absorbing part of the D-layer, while the ground-wave component of the signal progressively weakens as the receiver becomes further from the transmitter.
After dark the D-layer, which is mainly ionised by Solar Ultra Violet rays, quickly disappears and with it all the absorbing ionization. “Reflection” now occurs from the lower part of the E-layer at around 90 km to 100 km altitude. The result of this is that once the mid point of the path is in shadow at 100 km altitude, the signal strength will usually increase significantly, while the ground wave signal stays exactly the same strength. Thus night-time reception is marked by large and rapid swings in signal strength as the two, now more nearly equal strength, signals swing in and out of phase.

When Sun is active, strong solar flares can occur that will hit the sunlit side of Earth with hard X-rays. The X-rays will penetrate to the D-region, releasing electrons that will rapidly increase absorption, causing a High Frequency (3 – 30 MHz) radio blackout. During this time Very Low Frequency (3 – 30 kHz) signals will be reflected by the D layer instead of the E layer, where the increased atmospheric density will usually increase the absorption of the wave and thus dampen it, thus the Sky-wave is more powerful and lead to a rapid increase of the signal strength at the receiver. As soon as the X-rays end, the sudden ionospheric disturbance (SID) or radio black-out ends as the electrons in the D-region recombine rapidly and signal strengths return to normal.

We adopted the VLF receiver from UKRAA, which we acquired as a Kit. The assembling of the kit is simple and very well documented. We put the board, together with the antenna tuning unit, inside a metal box, as shown in the images below. 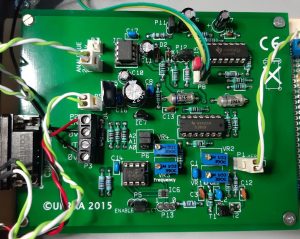 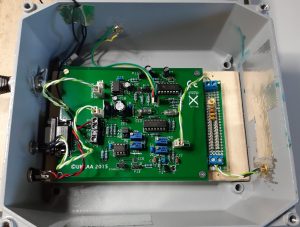 The receiver basically is a tunable audio frequency amplifier with an envelope detector. It consists of a number of functional blocks, of which the main ones are the radio frequency (RF) amplifier, the band-pass filter, the second RF amplifier, the detector and associated low-pass filter, and output buffers.
The power supply is 15 – 18 Vdc, 35mA and it has two analog output voltages with different ranges : 0-5 Vdc and 0-2.5 Vdc; we used the range 0-2.5.
The receiver has a number of other features, for details, consult the UKRAA documentation.

We describe in some details the two main block of the receiver : the RF amplifier and the band-pass filter. 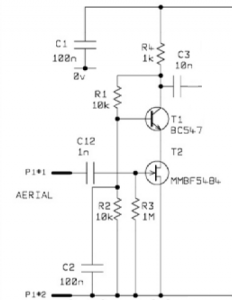 The RF amplifier, scheme in the image aside, consists of an untuned cascode amplifier (tuning is done with the antenna tuning unit) with a junction field effect transistor (JFET) at the antenna input interface and a bipolar junction transistor (BJT) at the output. The cascode amplifier in this application has low gain but gain is not its only purpose. This configuration prevents antenna loading by the bandpass filter and reduces capacitance multiplication effects (Miller Effect) that would detune the antenna. The input impedance is determined by a 1 MΩ biasing resistor on the JFET gate. 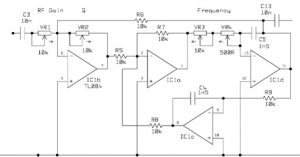 We will not go into details relating to this circuit configuration; it is a very selective band-pass filter whose frequency can be accurately configured using the two trimmers VR3 and VR4. With VR1 the gain of the stage is regulated, while the selectivity of the filter is regulated through its Q factor, acting on the VR2 trimmer. If Q is very high, the filter can go into auto-oscillation. The best performances are obtained by increasing Q up to obtain the auto-oscillation condition and then reducing it, by means of the trimmer, by a fraction of a turn : in this way the maximum gain can be achieved.

The apparatus consists of a magnetic loop antenna described in detail in the post Loop Antenna for Very Low Frequency, it is a “classic” antenna that must be oriented in the direction of the VLF station. The image below shows our antenna fixed on a wooden support and positioned on a “flowered” terrace. 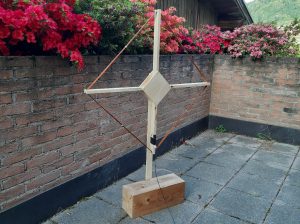 The antenna is connected with RG58 or RG174 50Ω coaxial cable to the VLF receiver on SMA connector. The analog output of the receiver, proportional to the signal intensity, is sent to the ESP32 module which acquires the signal, converts it to digital and sends it, via WiFi network, to the Raspberry PI which performs the storage, processing and display of data on graphic as shown in the post DataLogging with ESP32 Module. The image below shows the receiver and the ESP32 module. 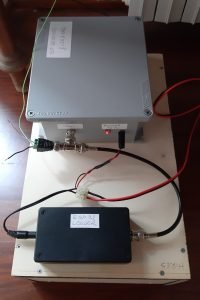 With an SDR (software defined radio) receiver and an up-converter we verified the VLF signals present in our area. We have considered the frequency band up to about 40 KHz; the spectrum is that represented in the image below, obtained with the SDR # application. 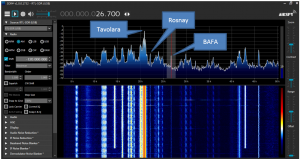 Among the various emissions, we have identified three VLF transmitters that can do for us : this is the 26.7 KHz signal emitted by the antennas of the Bafa transmitter in Turkey located about 1500 km; at a shorter distance, about 800 km, there is the 21.75 KHz transmitter of the HWU system located in Rosnay in France; at an even shorter distance, 560 km, we find the 20.76 KHz frequency of the Tavolara transmitter in Sardinia.
All these broadcasters are mainly used for radio communications with submarines, since VLF waves can penetrate many meters below the surface of the sea.
The 26.7 KHz emission, located at 1500 km, is the best candidate, albeit more distant and therefore weaker, to display more clearly the propagation of the radio signal in correspondence with solar flares.
The following maps show the location of the three selected VLF transmitters. 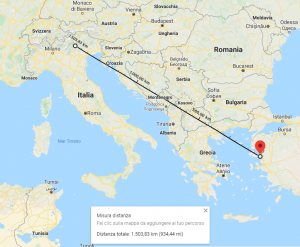 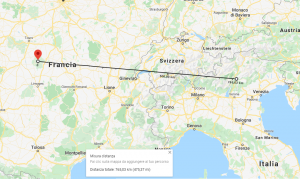 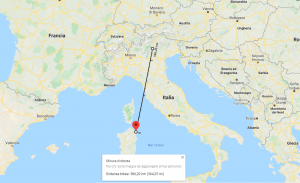 The chart below has been recorded at 26.7 kHz, from the Bafa transmitter in Turkey. This graph shows signal strength against time over a 24 hour period. It shows random variation in signal strength at night, followed by a change (decrease) as the rising sun recreates the D-layer. During the day, signal strength varies with the altitude of the Sun. At sunset, the D-layer recombines and is lost, producing another change (increase) in signal strength.
This trend is quite typical for a “quiet sun” situation. 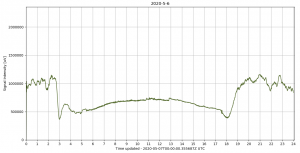 Unfortunately our environment and our homes are saturated with electromagnetic disturbances and we have to live with. often in our graphics we will discover interferences such as the one shown below : we must get used to them and not confuse them with real solar flares ! 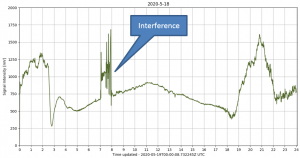 The first M class flare of the “new” solar cycle n.25 was detected by our system on 05/29/2020 ! The sun is currently going through a period of minimum activity, but there are the first “signs” of the new solar cycle. On 29/05/2020 an active sunspot zone gave rise to a series of class C and class M flares, detected by our VLF receiver. The image below shows the graph of our receiver and the graph produced by the GOES X-ray satellite. The main four flares can be identified. 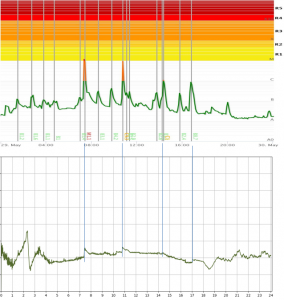