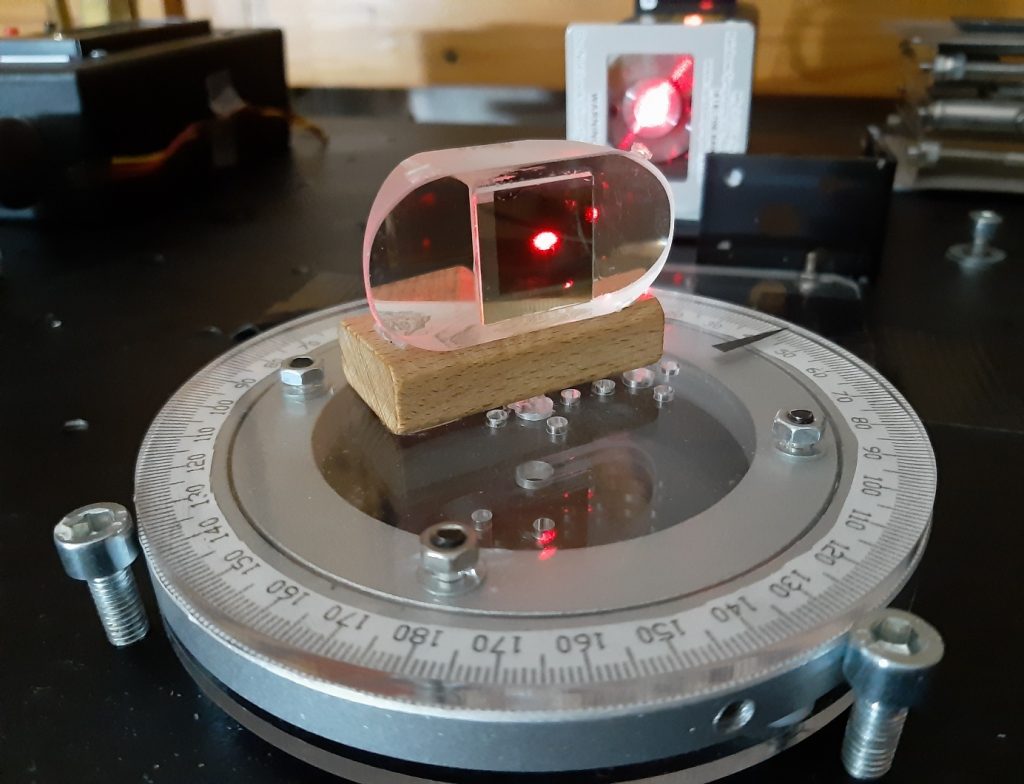 In the image above the evanescent wave excites the plasmon resonance on the surface of a thin layer of gold, the plasmonic wave is diffused and gives rise to the luminous red spot that can be seen on the prism.

In this post we show how to carry out an experiment with the aim of producing and measuring the plasmon resonance on the surface of a thin layer of gold.

SPR (surface plasmon resonance) is a physical process that is observed when polarized light hits a metal film under conditions of total internal reflection.
At the interface between two transparent media with different refractive index (for example glass and air) the light coming from the side of the medium with the highest refractive index is partly reflected and partly refracted. Above a critical angle of incidence, no light is refracted through the interface and total reflection occurs.
At the interface between the two media, a component of the electromagnetic field of the incident radiation, called evanescent wave, propagates up to a certain distance in the medium with a lower refractive index. The evanescent wave has intensity that fades quickly with an exponential trend.
The image below shows the progression of the evanescent wave in the case of total reflections within an optical fiber.

If the light is monochromatic and polarized and, in contact with the interface between the two media, there is a thin metallic layer, the evanescent wave interacts with the free electrons of the metal generating a plasmonic wave on the surface of the metal layer.

The electrons on the metal surface are mobile, they are defined as a liquid with a high electronic density (plasma) and create oscillations, which propagate in a parallel direction to the metal-dielectric interface. The propagating plasma waves are called superficial plasmons. When at a particular angle, the incident light wave vector mates with the moving electron vector (plasmons), resonance conditions occur. This coupling of the incident light with the surface plasmons leads to a loss of energy, since the energy of the photons is transmitted to the plasmons.
Thus a minimum is observed in the intensity of the radiation reflected at the angle at which the resonance occurs.

To achieve the conditions that allow the occurrence of the phenomenon, a prism is often used on whose surface a thin metallic layer of gold is applied. The image below shows on the left (A) the case in which there is total reflection without resonance, on the right (B) instead the angle of incidence of the radiation conveys a moment that comes into resonance with that of the plasmonic wave, transferring energy to the plasmon and thus reducing the intensity of the reflected beam. 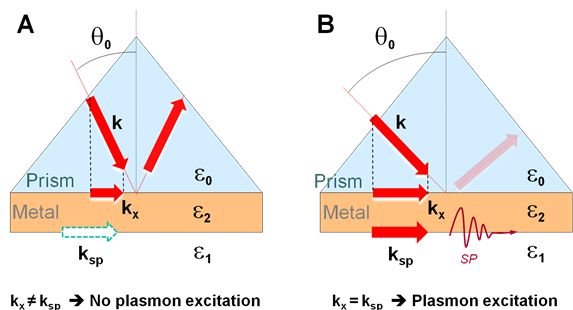 The Prism with the thin Gold layer

Finding a prism on which a metal film is deposited is a problem. A valid alternative is to use a slide on which the metal film has been deposited and to position the slide on the face of the prism.
The slide can be found easily, it is a “SPR glass slide” (NanoSPR), the dimensions are 20×20 mm and the metal thin layer, obtained by evaporation, is made of a 5 nm layer of Cr and of 45 nm layer of gold, for a total of 50 nm.
50 nm correspond to a really thin thickness : considering that a gold atom has a Van der Waals radius of 0.166 nm we get that the metal film has a thickness of only 150 atoms !
The slide was applied to the surface of the prism using optical silicone grease to ensure perfect optical coupling. A few drops of cyanoacrylate adhesive were applied to the sides of the slide to fix the slide.
The images below show the slide and the prism.

The experiment consists in having a beam emitted by a He-Ne laser (632.8 nm) hit on the prism prepared with the slide with the metal film and in measuring the intensity of the reflected beam. The measurement is made at different angles. For all these angles we are in the conditions of total reflection.
The image below shows the experimental procedure. We expect that, at a certain angle, the intensity of the reflected beam will have a pronounced minimum : this is the proof that the beam is exciting a surface plasmonic wave, which absorbs the energy of the beam itself.
In turn, the plasmonic wave on the surface of the metal film can undergo scattering by surface defects, with the result of producing a light emission towards the outside: in practice, a luminous spot on the surface of the metal film itself ( this effect can be seen in the cover image of the post).

The image below shows our experimental setup, with the laser, the polarizer, the prism placed on a graduated rotating table and the photodiode for the measurement of the reflected beam. The photometer described in the post PSoC based Photometer was used to measure the beam. 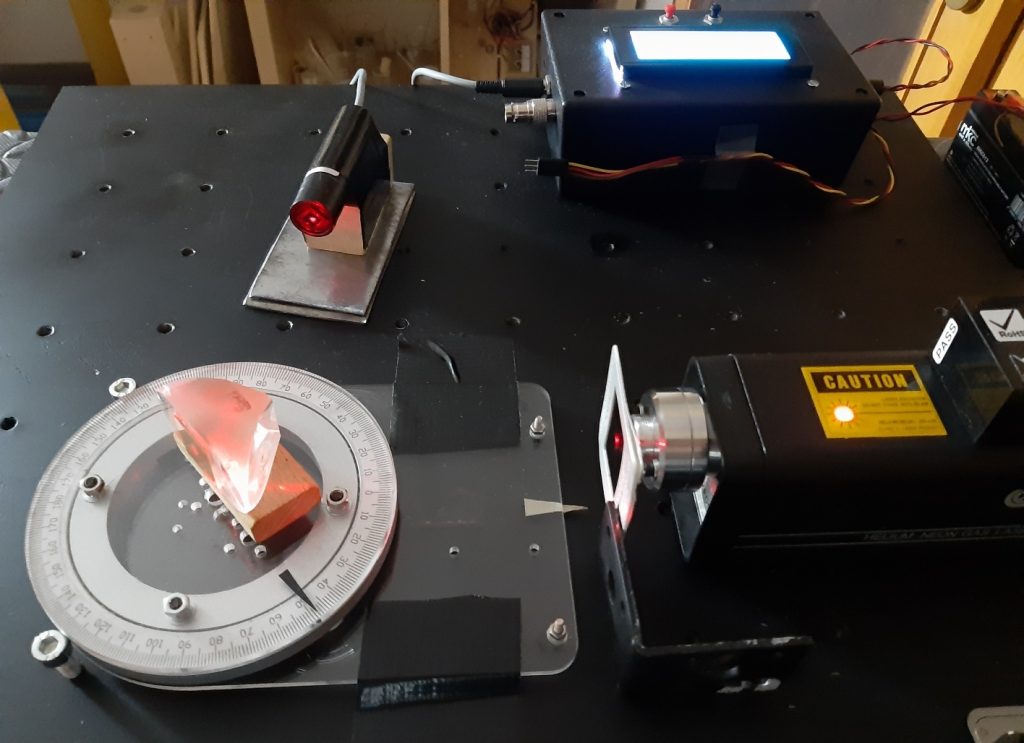 The image below shows the “geometric” detail with the relative positions of the laser, the prism and the detector. In particular it is important to take into account the refraction that occurs inside the prism : the angle of incidence of the beam that is measured is the “external” angle, while the internal angle is actually a little greater due to the refraction. 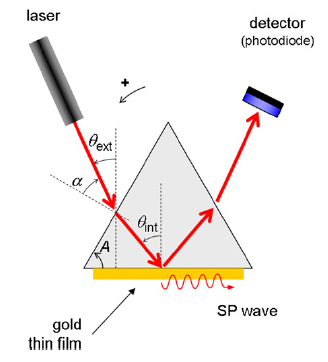 The trigonometry yields the equation to calculate the internal incidence angle knowing the external angle :

The reflectivity measurements at varying the angle of incidence were mainly made with the He-Ne laser at 633 nm, this is because it is the right wavelength to give rise to the phenomenon of the SPR. The experimental setup described above was used : the rotation of the prism holder table and the positioning of the photodiode for the measurement were done manually.

The graph below shows the results of the measurement. On the vertical axis the values ​​obtained from the photometer are shown, while on the horizontal axis the incidence angles are shown : in red the external angle, in orange the internal angle calculated with the trigonometric formula.

The minimum in reflectivity is evident for an internal angle of about 46° : in this position the resonance is occurring and the surface plasmonic wave is produced. 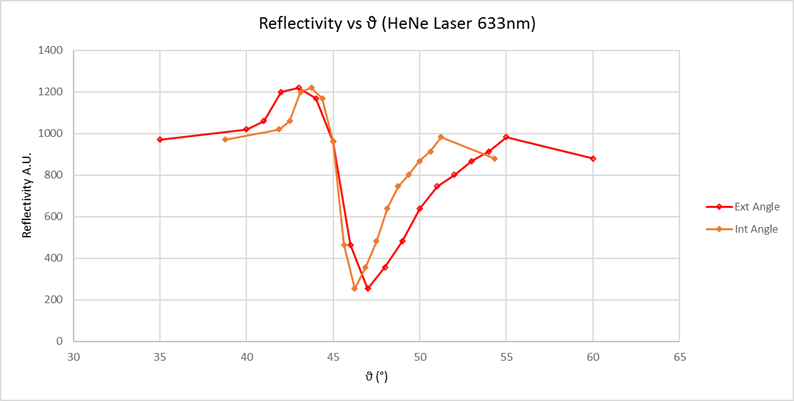 The same measurement was also made using a semiconductor laser with emission at 532 nm, as shown in the image below. 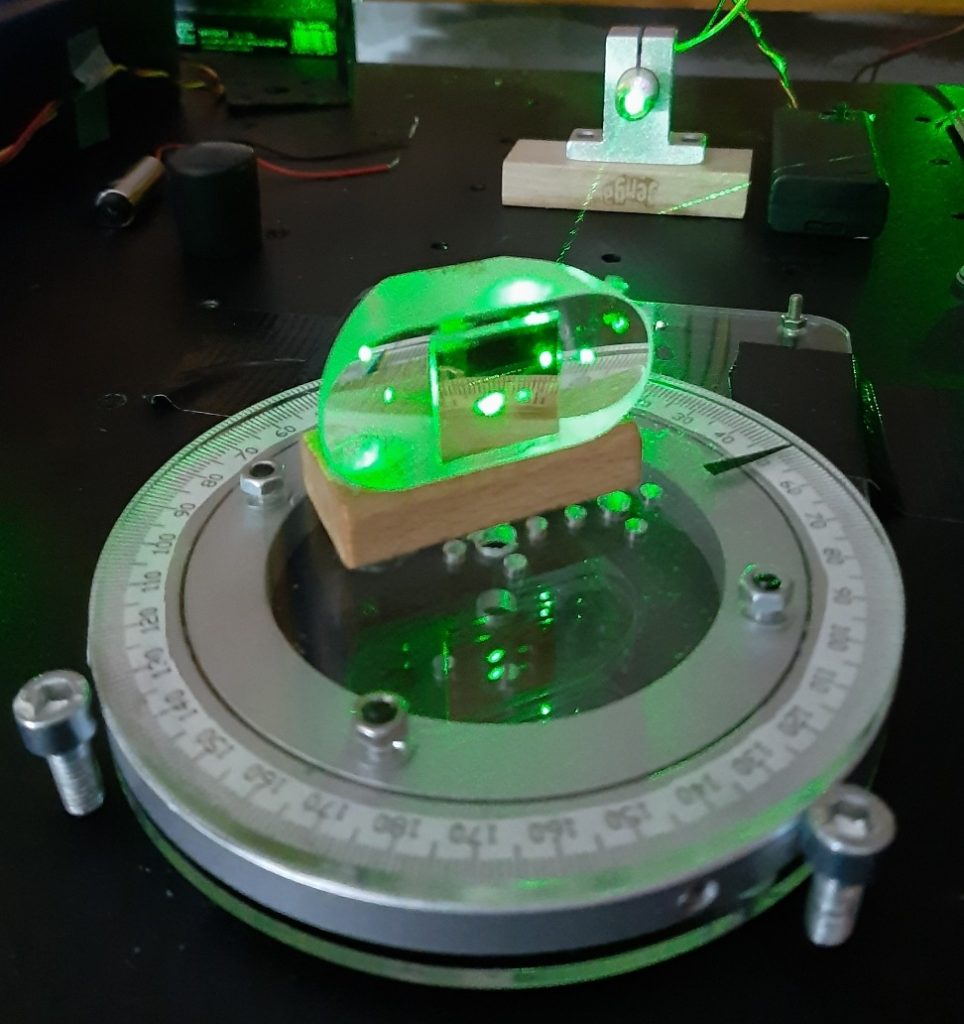 At this wavelength the SPR effect is much less pronounced, as can be seen in the graph below. The minimum in reflectivity is barely measurable and is placed at an angle of about 51°. 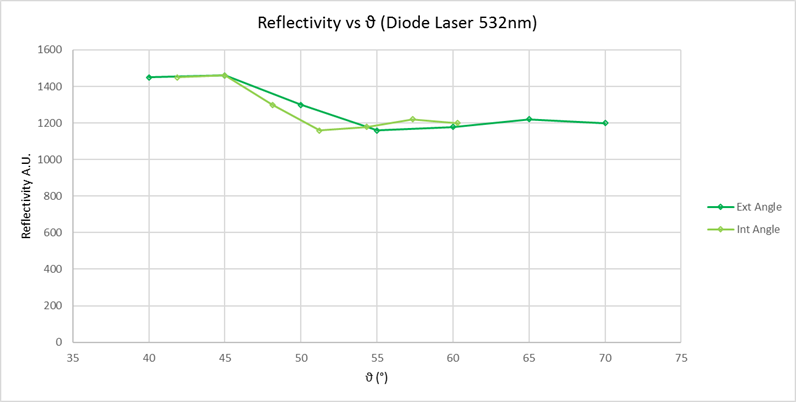 This experimental activity allowed us to explore and “touch” many advanced physical concepts, such as the evanescent wave, the surface plasmon resonance, and low-dimensional structures such as thin metal films.
We conclude by highlighting that the SPR phenomenon could be used for the realization of precise sensors : the angle and the wavelength at which the resonance occurs depend strongly on the external environment in contact with the metal film. By exploiting the SPR phenomenon, we are therefore potentially able to construct extremely sensitive sensors, for example for the detection of biological or organic molecules.