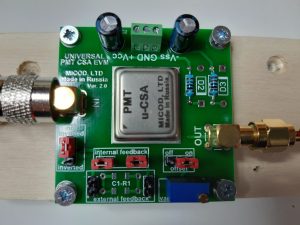 The latest addition to the Micod family is the universal PMT preamplifier. The device, housed in a metal package, consists of a CSP followed by a buffer stage. What is striking about this device is its versatility : there is in fact the possibility of modifying the hardware configuration so as to adapt to the specific application.
The deafult values ​​of the CSP resistor and feedback capacitor are 150KΩ and 330pF which give rise to a time constant τ = 50μs. However, there is the possibility of inserting external components in order to change gain and time constant to better adapt to the application requirements.
The CSP accepts both negative and positive pulses and the output buffer can be used in inverting or non-inverting mode so as to obtain pulses with positive or negative polarity in output.
The output buffer is also equipped with a trimmer for adjusting the offset and bringing the output level to zero. This functionality is useful in cases where the PMT and the amp are DC coupled, for example for light intensity measurement applications.

The component we used for the tests is conveniently mounted on a demo PCB, with SMA connectors, trimmers and terminal blocks, as shown in the cover image of the post.

The diagram below shows the pin-out and how to connect the component. 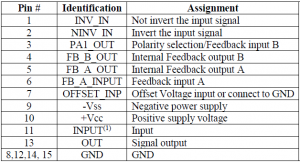 The basic test consisted essentially in connecting the amplifier to a power source (pair of 9V batteries) and connecting the input channel to a PMT. For this test we used a PMT with anode grounded and cathode connected to negative voltage. In this configuration amplifier and PMT are DC coupled, the electrical noise coming from the PMT is minimal and we can more accurately evaluate the system performance. The PMT was kept in complete darkness. The image below shows the connections. 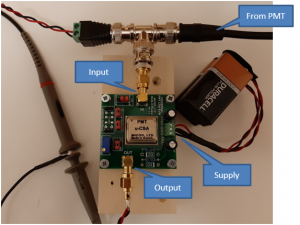 In the images below we can see the oscilloscope traces of the input (left) and output (right) signals. We can appreciate the very low noise both on the input channel and on the amplifier output channel. The low noise level allows us to easily identify the spurious pulses generated by the PMT (negative impulse in the left track) that when amplified give rise to a pulse output of max 20mV.

Using the same setup as the basic test described in the previous paragraph, we did a test of using the PMT + amplifier system as a low light intensity detector.
As we know the photomultiplier can be used in impulsive mode (coupled in AC) or in continuous mode (coupled in DC). In this case the PMT cathode must be connected to the negative HV, while the anode is connected to ground. The photocurrent produced by the PMT is sent to the CSP to be amplified and produce an output signal proportional to the intensity of the light reaching the PMT photocathode. Actually the output signal is produced by the sum of all the single pulses that overlap each other.
In the screens below you can see the output of the amplifier, on the left in case of absence of light, while on the right the case with presence of low intensity light.
For these applications the possibility of adjusting the offset is very useful.

The other type of application includes the detection and amplification of impulsive signals. A typical example is the gamma ray probe based on PMT and scintillator crystal. Gamma radiation interacts with the crystal and gives rise to light emissions that are acquired by the photomultiplier and transformed into electrical pulses. By analyzing these pulses it is possible to measure the activity rate (counting) and the energy of the incident radiation (spectroscopy).

The image below shows the setup used for this type of test: the Micod HV generator, already described in the post Micod HV Module, was used to drive the PMT, the signal produced by the PMT is taken by a splitter / combiner, which contains the limiting resistor for the PMT and the capacitor for the capacitive coupling. The signal is then sent to the amplifier. 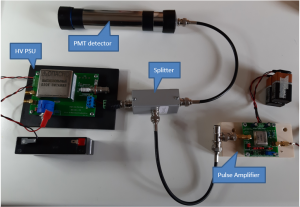 The following traces show the pulses that are obtained at the amplifier output. The amplitude is obviously variable up to a maximum of about 2V even if most of the pulses remain below the value of 1V. The exponential tail goes to zero in a time of about 150 – 200μs. 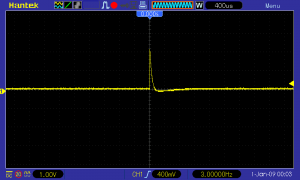 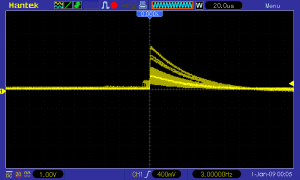 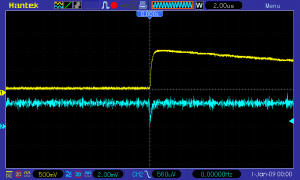 The amplified pulse can be used immediately in counting applications to assess the intensity of the radiation : counts per second or counts per minute. With a pulse shaping circuit and a multichannel analyzer (MCA) it is possible to analyze the energy of the pulse and produce a histogram with the distribution of the energies of the pulses, thus tracing the spectrum of the gamma radiation energies. The image below shows the setup for this application : the amplifier output is connected to a shaper circuit (PMT Pulse Processing (ENG)) which transforms the triangular pulse produced by the amplifier into a Gaussian pulse with a width of about 100μs. 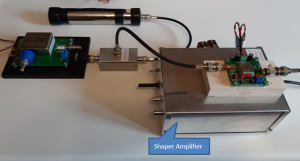 The image below shows the pulse produced by the amplifier (in yellow) and that obtained by the shaper (in blue). 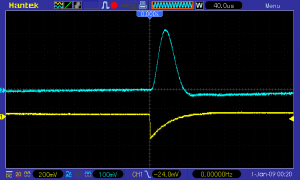 The Gaussian pulse is acquired by our MCA based on a sound card and software Theremino MCA (DIY Gamma Spectrometry). In this way the gamma spectra of the following sources were acquired: Americio 241, Cesium 137 and Sodium 22. The images below show the spectra of these sample sources. 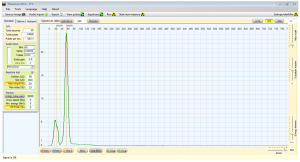 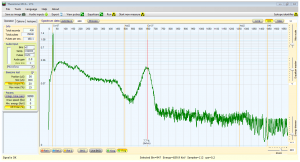 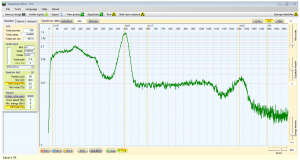