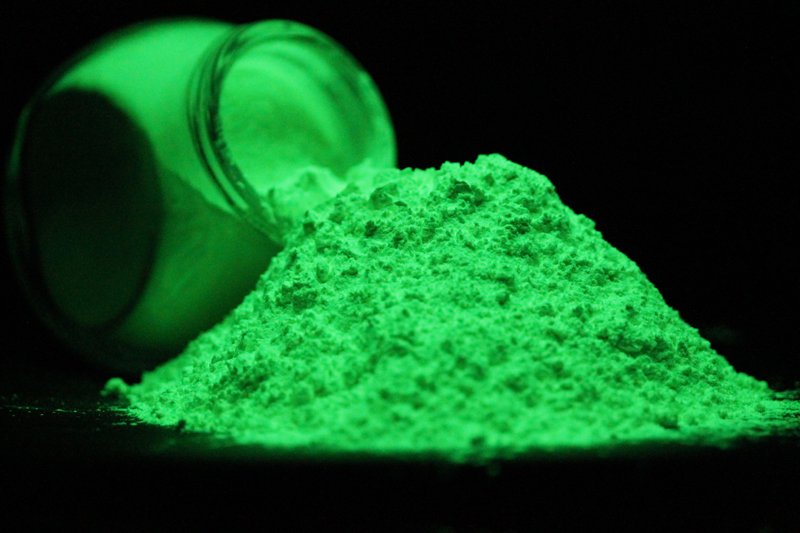 With the “phosphorimeter” described in the post Glowing in the Dark, we made a series of measurements on the classic zinc sulfide phosphorus, doped with silver and also with copper. Zinc sulphide is an interesting material : ZnS is a semiconductor, ie a material with an electron-filled valence band and an empty conduction band. It is known that the energy gap between the two bands is, in pure ZnS, about 350 kJ/mol (3.6 eV). Given the large energy gap, only a very small concentration of charge carriers is present in normal temperature conditions. Doping with copper, silver or manganese introduces intermediate electronic energy levels within the forbidden band. In this situation, lighting with UV light or even ambient light excites the electrons, taking them from the valence band to the conduction band. The subsequent electron-hole recombination mechanism, through the intermediate energy levels introduced with doping, leads to the emission of phosphorescence. 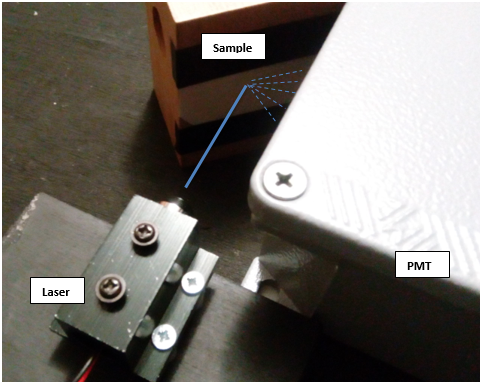 Zinc sulfide (or zinc sulphide) is an inorganic compound with the chemical formula of ZnS. This is the main form of zinc found in nature, where it mainly occurs as the mineral sphalerite. Although this mineral is usually black because of various impurities, the pure material is white, and it is widely used as a pigment. In its dense synthetic form, zinc sulfide can be transparent, and it is used as a window for visible optics and infrared optics.

Zinc sulfide, with addition of few ppm of suitable activator, exhibits strong phosphorescence, and is currently used in many applications, from cathode ray tubes through X-ray screens to glow in the dark products. When silver is used as activator, the resulting color is bright blue, with maximum at 450 nanometers. Using manganese yields an orange-red color at around 590 nanometers. Copper gives long-time glow, and it has the familiar greenish glow-in-the-dark. Copper-doped zinc sulfide (“ZnS plus Cu”) is used also in electroluminescent panels. 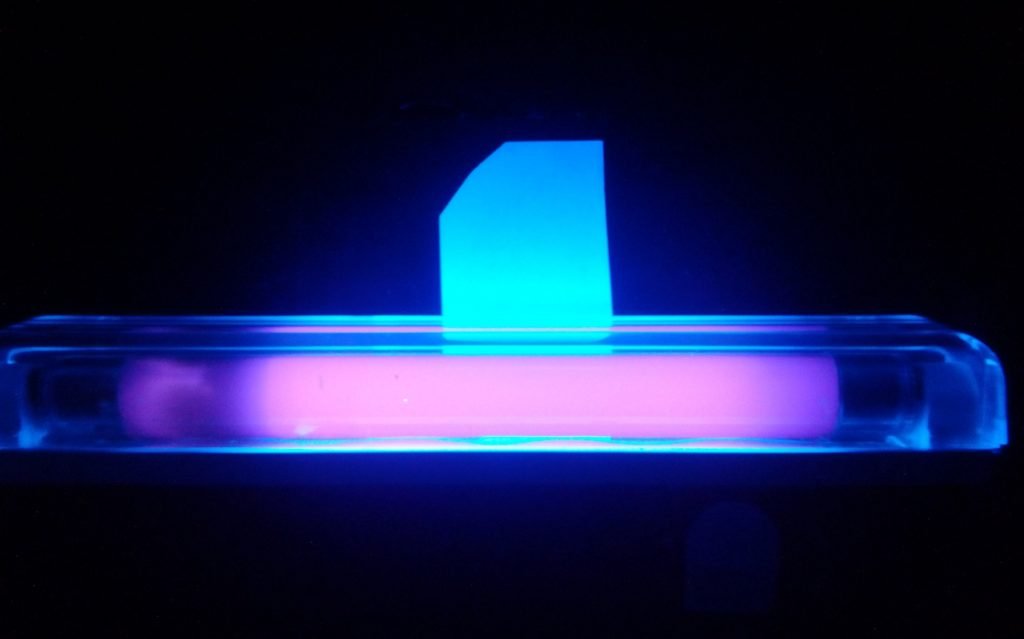 The image on the left shows the sample used for phosphorescence measurements : it is a sheet impregnated with ZnS(Ag). In the image the luminescence, light blue, is caused by the emission of a UV lamp.

The samples were acquired with a pulse counting window (Gate) equal to 1 ms and with a repetition frequency of 100 Hz. The results are shown in the graph below.

The decay of the phosphorescence of silver doped zinc sulphide can be modeled as a second-order system in which the luminescence decay over time follows a “power law“: in this case the trend of the value 1/√Intensity should be linear with time, as indeed appears in the following graph. This aspect will be dealt with in more detail in a subsequent paragraph.

Copper activated zinc sulphide shows an intense and long-lasting phosphorescence. For this reason, this compound was one of the most used phosphors, although it has recently begun to be supplanted by strontium aluminate (activated with europium) whose phosphorescent emission is even more intense and lasting.

Phosphorescence measurements were made with a cuvette filled with ZnS(Cu) powder, as shown in the image aside.

The following image shows instead the spectrum of the emission of the phosphorescence of zinc sulfide, located in the green band. The signal due to the excitation laser can also be seen in the spectrum.

The samples were acquired with a pulse counting window (Gate) equal to 1 ms and with a repetition frequency of 100 Hz. The results are shown in the graph below, in which we can see the long persistence of luminescence.

Also the decay of the phosphorescence of copper doped zinc sulphide can be modeled as a second-order system in which the luminescence decay over time follows a “power law”: in this case the trend of the value 1/√Intensity should be linear with time, but in the case of the ZnS(Cu), the correspondence with this law is less precise. The graph below show the trend of the 1√Intensity value for one distinct time interval from 1 s to 5 s. For this decay we can distinguish a first phase characterized by a rapid decrease, followed by a second phase in which the decay is slower. 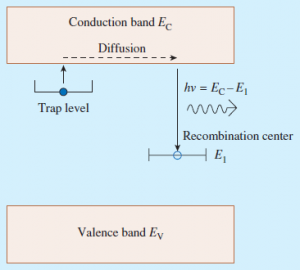 In the image aside (Massimiliano Malgieri et al 2018 Phys. Educ. 53 065016) a generic energy bands model for phosphors consisting of semiconductors is presented.
A phosphor is composed of a base compound (a pure insulating material or a wide energy gap semiconductor, as in the case of ZnS) that is “activated” with the addition of a small percentage of impurities (doping). These impurities deform the crystal structure, producing various types of metastable energy levels between the conduction band and the valence band of pure crystal.
A previously excited electron in a “trap” level reaches the conduction band by thermal excitation and then subsequently decays to a recombination center. In the case of ZnS doped with Cu, the recombination center consists of an energy level introduced by the copper atom (Cu2 +, further ionized by Cu +) which generally replaces the zinc in the lattice.

Where n is the concentration of carriers excited to a higher energy level. Integrating with respect to time, the usual exponential decay law is obtained :

Such law applies to radioactive phenomena, fluorescent decay, and in some cases to phosphorescent phenomena. This model works as long as the decay rate is proportional to the population.
But in our case the ZnS phosphorescence decay does not follow an exponential law, so we have to search for a different model.

In second-order kinetics the light emission depends on the concentrations of both excited electrons (ne) and holes or unoccupied lower energy levels (nh). Second-order decay, when the rate involves two equal concentrations, yields :

Integrating with respect to time, we obtain :

Thus, 1/ne(t) versus time is linear with a slope equal to the rate of the reaction, and its derivative, which is proportional to the intensity of emission, is given by :

So the quantity 1/√Intensity should be linear with time.
In the case of ZnS(Ag) the agreement with a second-order system is very good (see above the graph), for ZnS(Cu) the behavior is little different : there is a fast decay in the first phase and a slower decay in the second phase. A literature summary indicates that an abrupt drop in brightness (probably exponential) followed by a slow power-law decay, I = a/(t+t0)b with b in the range of 0.2 to 2, is generally observed for sulfide phosphors.

The used equipment has proved to be more than adequate to perform phosphorescence measurements with good accuracy. Zinc sulphide is a semiconductor with phosphorescence properties and it is particularly suited to verify the physical-mathematical model of the energy bands used to explain the temporal trend of the phosphorescence.