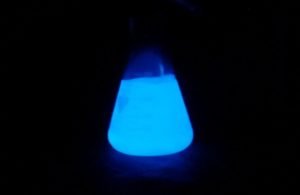 Chemiluminescence is the emission of electromagnetic radiation, particularly in the visible and near infrared, which can accompany a chemical reaction. Considering a reaction between the reagents A and B to give the product P:

In practice, the reaction leads to the product P in an excited state and the decay to the ground state does not lead to the formation of heat, but of a photon (hν). It is therefore necessary that the mechanisms of radiative decay are more efficient than those that are not radiative.

An example of a reaction that leads to chemiluminescence is that of luminol with hydrogen peroxide catalyzed by metal ions.

Luminol (C8H7N3O2) is a chemical that exhibits chemiluminescence, with a blue glow, when mixed with an appropriate oxidizing agent. Luminol is a white-to-pale-yellow crystalline solid that is soluble in most polar organic solvents, but less soluble in water.
Forensic investigators use luminol to detect trace amounts of blood at crime scenes, as it reacts with the iron in hemoglobin. Biologists use it in cellular assays to detect copper, iron, cyanides, as well as specific proteins.

To exhibit its luminescence, the luminol must be activated with an oxidant. Usually, a solution containing hydrogen peroxide (H2O2) and hydroxide ions in water is the activator. In the presence of a catalyst such as an iron or periodate compound, the hydrogen peroxide decomposes to form oxygen and water :

Laboratory settings often use potassium ferricyanide or potassium periodate for the catalyst. In the forensic detection of blood, the catalyst is the iron present in haemoglobin. Enzymes in a variety of biological systems may also catalyse the decomposition of hydrogen peroxide.
Luminol reacts with the hydroxide ion, forming a dianion. The oxygen produced from the hydrogen peroxide then reacts with the luminol dianion. The product of this reaction — an unstable organic peroxide — is made by the loss of a nitrogen molecule, the change of electrons from triplet excited state to ground state, and the emission of energy as a photon. This emission produces the blue glow.
The image below shows schematically the reaction that produces the luminescence:

We have prepared two solutions :

The image below shows the two solutions. The catalyst (Iron, Copper, …) is to be added to the solution B. Mixing the two solutions will produce the light emission from the chemiluminescence of the chemical reaction. 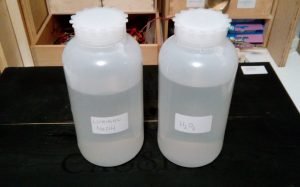 For the measurement of luminol chemiluminescence, we used the “dark box” already described in the posts: Photon Counting & Statistics , Glowing in the Dark. The solution “B” with the reaction catalyst is placed inside a glass bottle placed in front of the PMT. The solution with luminol is placed in a syringe outside of the box. After closing the box and starting the acquisition by the PMT, the luminol is introduced into the bottle with the syringe.
The image below shows the experimental setup used: 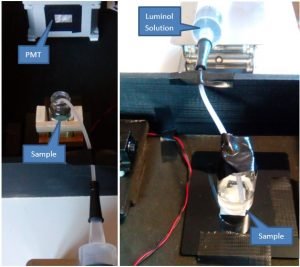 The graphs below show the trend of the light emission catalyzed by the iron ion contained in the potassium ferrocyanide. After a first phase in which the emission increases and reaches a maximum, there is a decay with an exponential trend.

The graphs below show the trend of the light emission catalyzed by the copper ion contained in the copper sulphate. The brightness decay follows an exponential trend with two different time constants.

The graphs below show the trend of light emission catalyzed by sodium hypochlorite. In this case, with respect to iron and copper, the increase in brightness is quite slow and the subsequent decay is exponential with two different time constants.

From the comparison between the three different curves we can say that the first part reflects the kinetics of the chemical reaction between the reactants: the reaction catalyzed by copper is faster than that catalyzed by iron while the reaction with sodium hypochlorite is the slowest one. The subsequent decay of luminescence generally follows an exponential trend (similar to the phenomenon of phosphorescence). 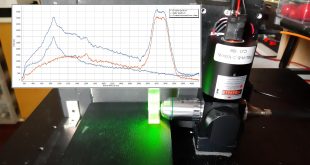