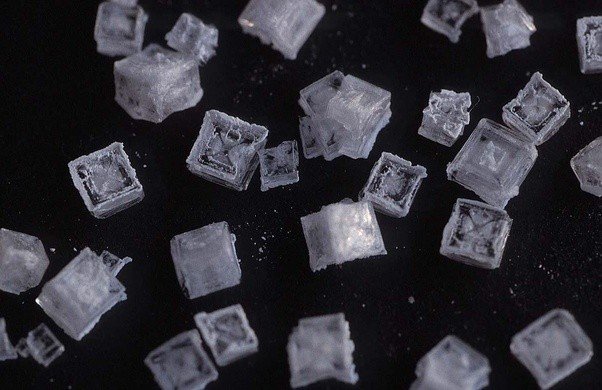 The salient features of its structure are:

In this structure, each corner ion is shared between eight unit cells, each ion a face of the cell by two cells, each ion on a edge by four cells and the ion inside the cell belongs entirely to that unit cell.
So the positions of the ions are the followings (with Na at the center of axis) :

With this information we can compute the Structure Factor Fhkl, assuming the scattering factors of Na and Cl are expressed by fNa and fCl, respectively. The structure factors determines the amplitude and the phase of the diffracted beams. The intensity (measured value) is linked to the squared module of the Structure Factor.

For a perfect crystal the lattice gives the reciprocal lattice, which determines the positions (angles) of diffracted beams, and the basis gives the structure factor

which determines the amplitude and phase of the diffracted beams for the (hkl) crystal plane.

where the sum is over all atoms in the unit cell,

are the positional coordinates of the jth atom, and

is the scattering factor of the jth atom. The coordinates

have the directions and dimensions of the lattice vectors

defines a reciprocal lattice point at

The FCC lattice is a Bravais lattice, and its Fourier transform is a body-centered cubic lattice. However to obtain

without this shortcut, consider an FCC crystal with one atom at each lattice point as a primitive or simple cubic with a basis of 4 atoms, at the origin

The most intense diffraction peak from a material that crystallizes in the FCC structure is typically the (111). Films of FCC materials like gold tend to grow in a (111) orientation with a triangular surface symmetry. A zero diffracted intensity for a group of diffracted beams (here,

of mixed parity) is called a systematic absence.

is similar to the pure FCC case and becomes the following :

that can be tabulated for each hkl triplet :

It can be noted that the main peaks are the reflections from 200 and 220 planes, whilst the reflection from the plane 111 is present but it is weak because it arises from the scattering difference from the two types of ion.

Most of the alkali halides, alkaline earth oxides, and sulphides exhibit this type of structure.

The first test performed was the complete 10° to 120° scan of the crystal, using the non-filtered tube emission, configured at 30 KV and 80 μA. The result is shown in the graph below, in which the Bragg reflections for the Kα and Kβ lines of the copper are present. The reflections were highlighted for the order n = 1, n = 2 and n = 3.

For the crystallographic analysis of sodium chloride we used the Nickel filter to have monochromatic emission in correspondence only to the Kα line of the copper at 0.1542 nm. We examined the NaCl crystal in the two orientations allowed by our protractor, corresponding to the crystal orientations (200) and (020). The images below show the setup of the measurements and the Bragg peaks obtained, both at about 31° 30′. Having obtained the same results, within the experimental error, is the demonstration that we are dealing with a crystal of cubic structure. 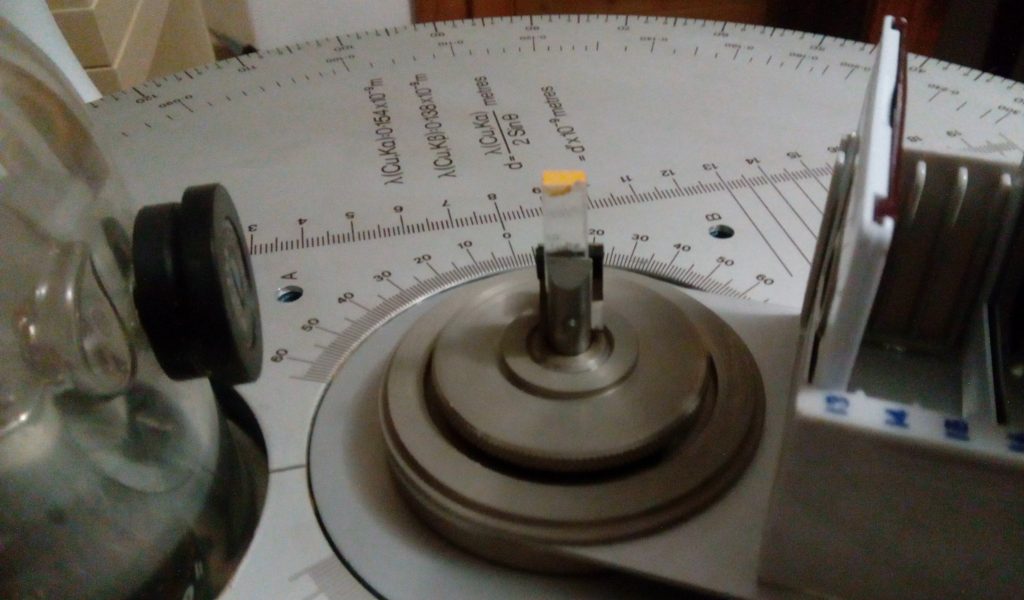 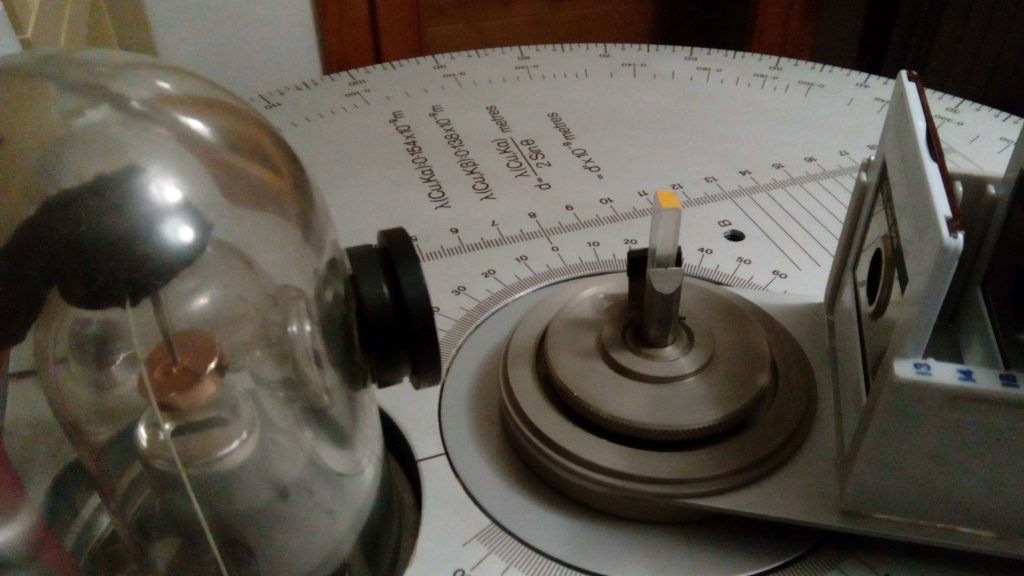 Further experimental investigations can be made by diffraction from powders or with the Laue technique having a small thickness single crystal available, but at the moment we have to settle for what we have already obtained and proceed to the “resolution” of the crystal with the available data.

From the checks made, described above, it has been established that the sodium chloride crystal has a cubic structure. The variants of the cubic lattice are the followings :

each of these is characterized by a specific pattern of reflections. We verify that the experimentally obtained Bragg peaks are compatible with the fcc structure. Meanwhile for a cubic crystal with lattice constant a, the distance d between adjacent lattice planes (hkl) is computed as follows:

The values ​​of a obtained are congruent with each other, a sign of the correctness of the initial hypotheses. They are also close to the correct value which turns out to be 0.564 nm.

The image below shows the Laue diagram of a NaCl (100) single crystal with a face-center cubic crystal lattice (fcc). If the diffraction pattern is rotated by 90° around the direction of the primary beam, it is again brought to coincidence. Since the primary beam impinges perpendicularly on the (100)-plane of the NaCl crystal, the crystal direction [100] is a fourfold axis of symmetry. The intensity of the reflections depends on the reflecting crystal surface as well as on the spectral intensity distribution of the X-rays. 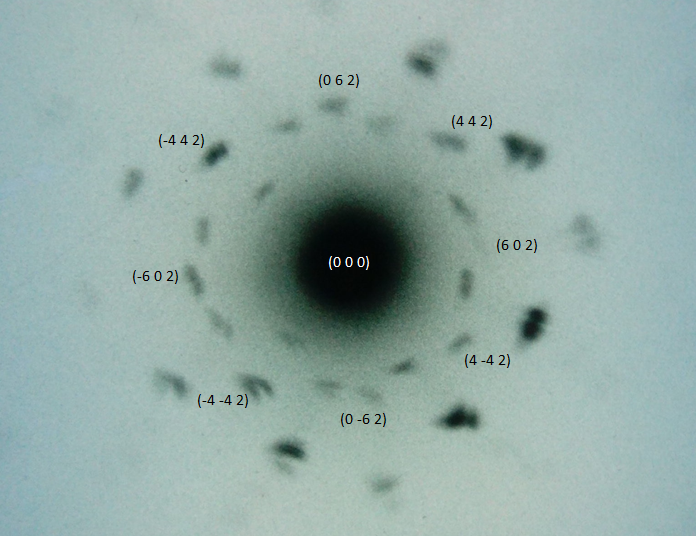