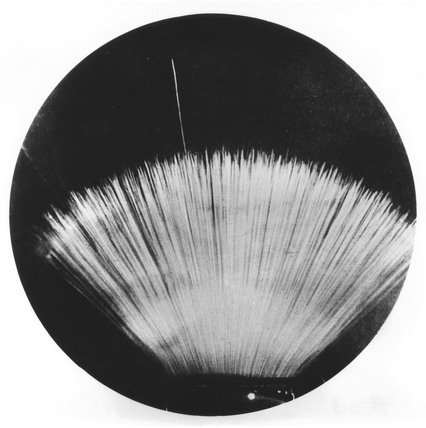 This energy is a substantial amount of energy for a single particle, but their high mass means alpha particles have a lower speed (with a typical kinetic energy of 5 MeV; the speed is 15,000 km/s, which is 5% of the speed of light) than any other common type of radiation (β particles, neutrons, etc.). Because of their charge and large mass, alpha particles are easily absorbed by materials, and they can travel only a few centimeters in air. They can be absorbed by tissue paper or the outer layers of human skin (about 40 μm, equivalent to a few cells deep).

The interaction of charged particles or photons with matter is electromagnetic and results either in a gradual reduction of energy of the incoming particle (with a change in its direction) or in the absorption of the photon. Particles such as nuclei, protons, neutrons and mesons are subject to a nuclear interaction as well, which is, however, of much shorter range than the electromagnetic one. The nuclear interaction may become predominant only when the particles have enough energy to overcome Coulomb-barrier effects.

Heavy charged particles lose energy through collisions with the atomic electrons of the material, while electrons lose energy both through collisions and through radiation when their trajectory is altered by the field of a nucleus (bremsstrahlung radiation). Therefore fast charged particles moving through matter interact with the electrons of atoms in the material. The interaction excites or ionizes the atoms, leading to an energy loss of the traveling particle.

The mean energy loss per distance traveled of swift charged particles (protons, alpha particles, atomic ions) traversing matter (or alternatively the stopping power of the material) is described by the Bethe formula. For electrons the energy loss is slightly different due to their small mass (requiring relativistic corrections) and their indistinguishability, and since they suffer much larger losses by Bremsstrahlung, terms must be added to account for this.
For low energies, i.e., for small velocities of the particle, the Bethe formula reduces to :

The force usually increases toward the end of range and reaches a maximum, the Bragg peak, shortly before the energy drops to zero. The curve that describes the force as function of the material depth is called the Bragg curve. This is of great practical importance for radiation therapy.
The mean range of the particles can be calculated by integrating the reciprocal stopping power over energy:

The experiment aims to measure the range of alpha particles in a dense material such as silver, evaluate the energy drop and plot the Bragg curve.

The experiment on measuring absorbance of alpha particles in matter is based on the alpha spectrometer described in the post DIY Alpha Spectrometer. The instrument is based on a PIPS solid state sensor with active area of 100 mm2, the sensor is placed inside a vacuum chamber. The signal processing chain includes a charge sensitive preamplifier followed by a shaper amplifier. The signal, properly amplified and shaped, is acquired by the audio ADC of the PC and processed by the multichannel Theremino MCA analyzer.

A Po210 source and the detector are both housed inside a vacuum chamber at fixed-distance. The alpha particle source is screened with a growing number of extremely thin silver sheets (the thickness of the silver sheet is estimated at 0.5 μm). Depending on the thickness of total silver layer we measure:

The image below shows the source and the silver sheets used as a screen. 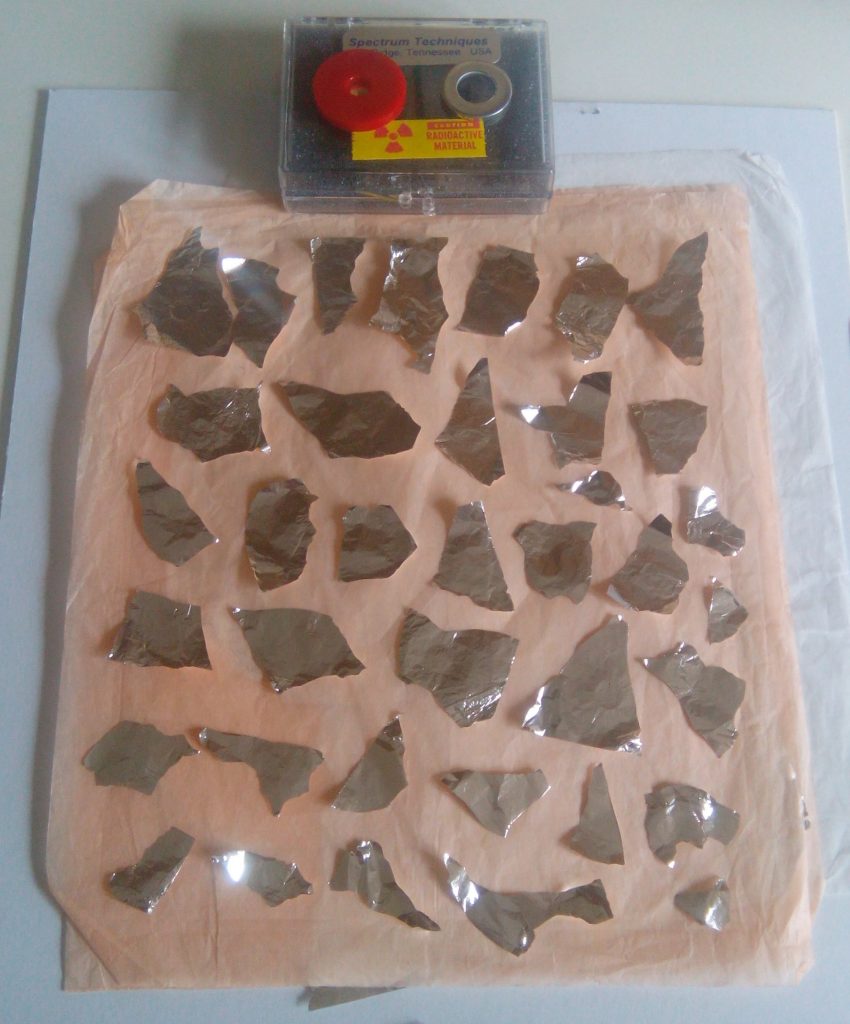 The image below shows the detector and shielded source for a measurement. 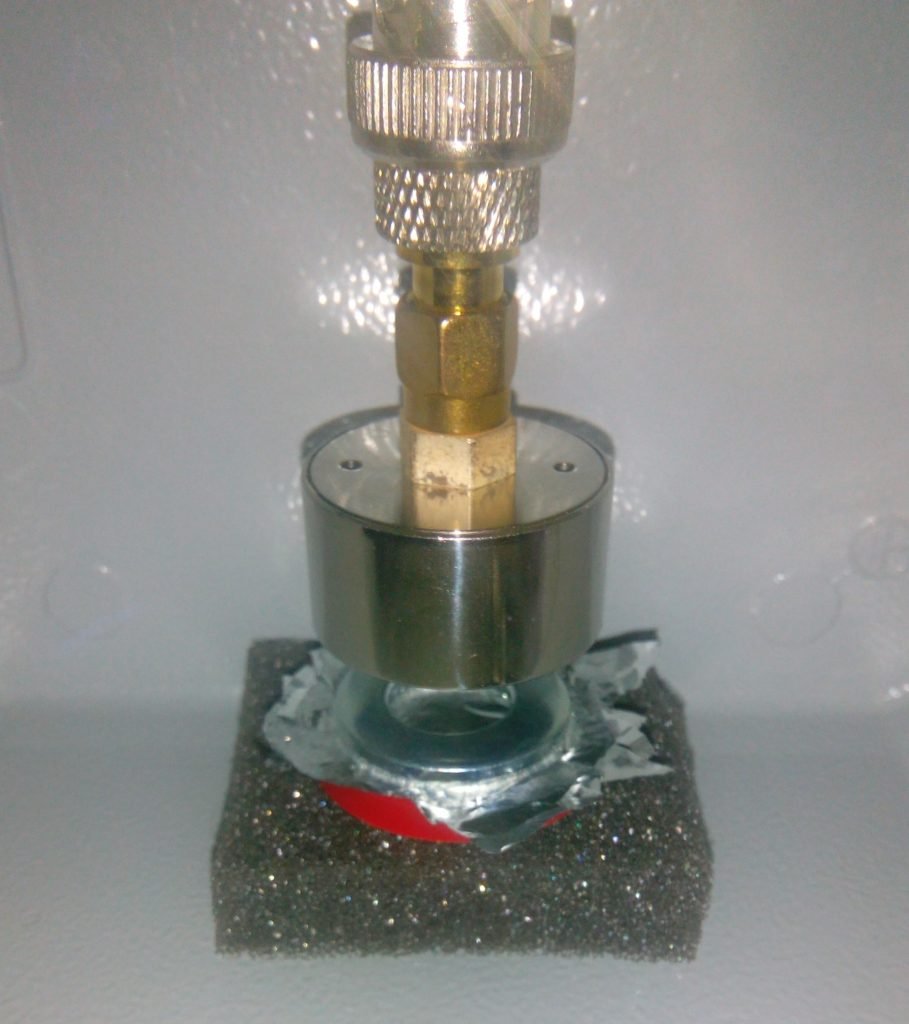 In the range measure, the same number of alpha particles should be reaching the detector until the number of silver foil placed between the source and the detector reaches the range of alpha particles. Further increasing of the number of silver layers causes the counting rate of the detector should abruptly fall to 0. We point out that the relative position of source and detector is not changed and therefore the solid angle “seen” by the detector remains constant. The only variation is the increase in the scattering by the silver sheets that may result in a small particle loss from the beam.
The results of this measure are shown in the graph below. 27 sheets of silver leaf were used before counting zero. From the graph below you get a value of 12 μm for the range. 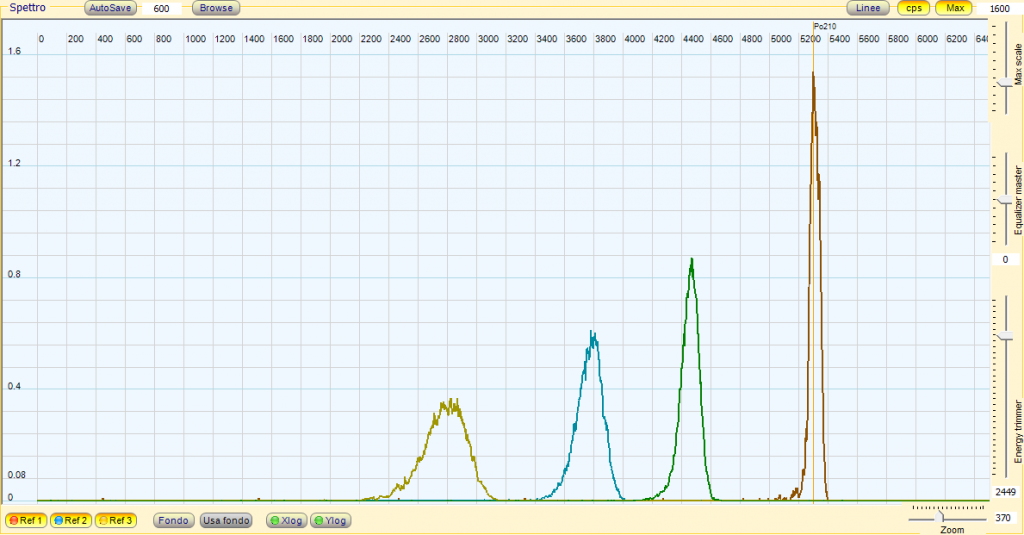 Taking energy data for each number of layers, from 0 to 27 we obtain the plot below which shows the residual energy of a alpha particle when it reaches the detector as a function of silver thickness. The points are fitted with a polynomial curve.

The second plot shows the curve obtained from the derivative of the energy curve, thus it gives the energy loss per unit length. It is called the “Bragg curve”. 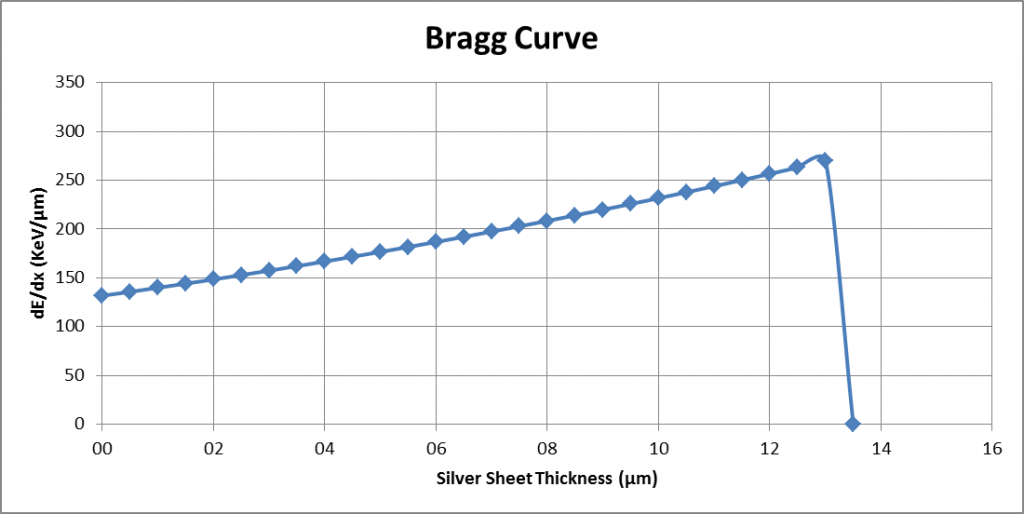 The experimental results for the Bragg curve are in good agreement with the theory : the obtained curve shows a 1/E dependence as predicted by the equations and the peak of the energy loss, just before it drops to 0, is evident : as the particle reaches the end of its range the energy loss dE/dx reaches a maximum and then it drops rapidly to 0.