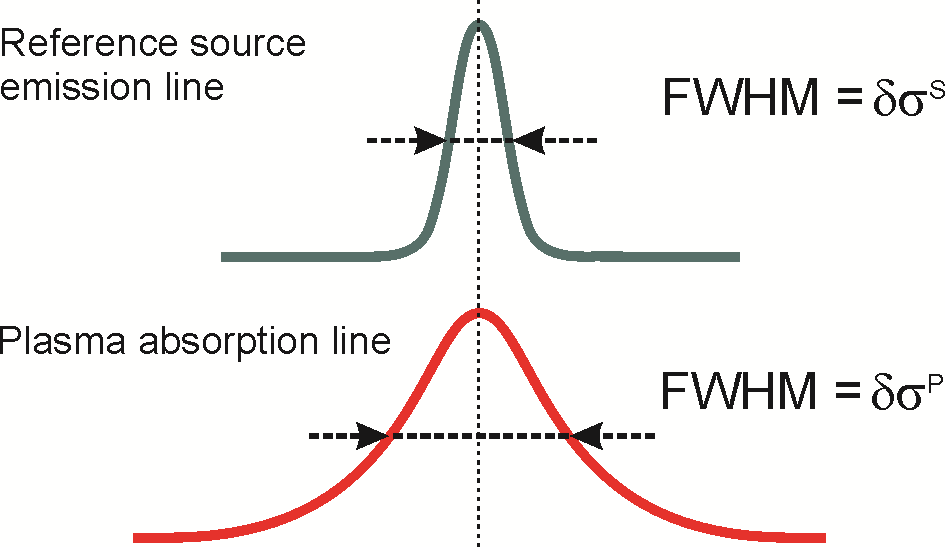 In the Atomic Spectroscopy post, we have learned (and experimented) that the emission spectrum of a chemical element is made up of discrete lines corresponding to the electromagnetic radiation emitted by the electrons of its atoms when they “drop” from a higher energy state to one of less energy.

For each transition between states, the energy of the emitted photon is equal to the energy difference of the two states according to the Planck equation:

which relate the energy of the transition with the frequency of the photon of light emitted (h is the constant of Planck).
However, it can be verified experimentally, using high-resolution spectrometers, that the width of the spectral lines in terms of wavelength is not infinitesimal but it has a measurable value which depends on many factors. This phenomenon is known as “spectral broadening” and is widely used and studied to deeply understand the light emission phenomena.
Of course, the experimental study of this phenomenon requires high resolution tools with unreachable performance for our modest tool : DIY Diffraction grating Spectrometer, despite these limitations, we will see how interesting tests can be made with the equipment of our DIY laboratory.

Physical phenomena that broaden the spectral lines are essentially the following:

Natural broadening is directly related to the principle of Heisenberg. This is one of the basic principles of quantum mechanics, and is characteristic of particle waves behavior. The principle, in its energy-time version, states that in a physical phenomenon the product of the uncertainties ΔE and Δt assumes the minimum value:

Now we know that the lifetime of excited atomic states is finite (of the order of microseconds-nanoseconds), so also the uncertainty Δt has this value. From Heisenberg’s relation it can be deduced that ΔE ≠ 0 (would be null in the case of infinite lifetime) and therefore also the frequency of the photon emitted has an intrinsic uncertainty that is :

the value of this uncertainty is really low : 10-5 nm and normally it is absolutely negligible.

Thermal broadening is due to the doppler effect that occurs when the radiating atoms have a  movement relative to the observer. The random atomic movement of the atoms is directly related to the temperature, which is why this broadening mechanism is called thermal.
As we know from the Maxwell-Boltzmann statistics the speed of gas atoms follow a gaussian profile and the mean energy is on the order of kT, where k is the Boltzmann constant and T is the temperature. Mathematically it can be shown that the spectral line broadening profile is also Gaussian, with a value given by:

The equation shows that broadening increases with temperature and is higher for light atoms. By doing the calculations you see that for hydrogen at the temperature of 6000°K, the width of the Hα line is 0.036 nm. As you can see, also in this case, these values are absolutely out of the reach of our tools.

The last phenomenon that causes broadening of spectral lines is the collisions between excited atoms which can become predominant in high-density gas plasma emissions (high pressures). In this case, the spectral line profile is not Gaussian but Lorentzian, characterized by a narrower spike and longer wings. In the context of high pressure and high temperatures, the phenomenon of resonant self-absorption can also occur. This phenomenon consists in the auto-absorption of the emitted radiation by colder external gas layers.

This phenomenon can also be easily observed with our instrumentation using a high pressure sodium lamp.

Magnetic or Electrical external fields cause the Zeeman effect or the Stark effect with the splitting of the spectral lines and the final result of causing a broadening of the lines.

The experimental setup consists in acquiring the emission spectrum of a high pressure sodium lamp. It is useful and interesting to capture the spectrum when the lamp is heating up. Indeed, when the lamp is switched on, the sodium vapor pressure is low and grows as the temperature rises. When the lamp has reached the working condition, both the temperature and the pressure are high and collision broadening and resonant auto-absorption are evident.

The picture below shows the lamp with its power supply: 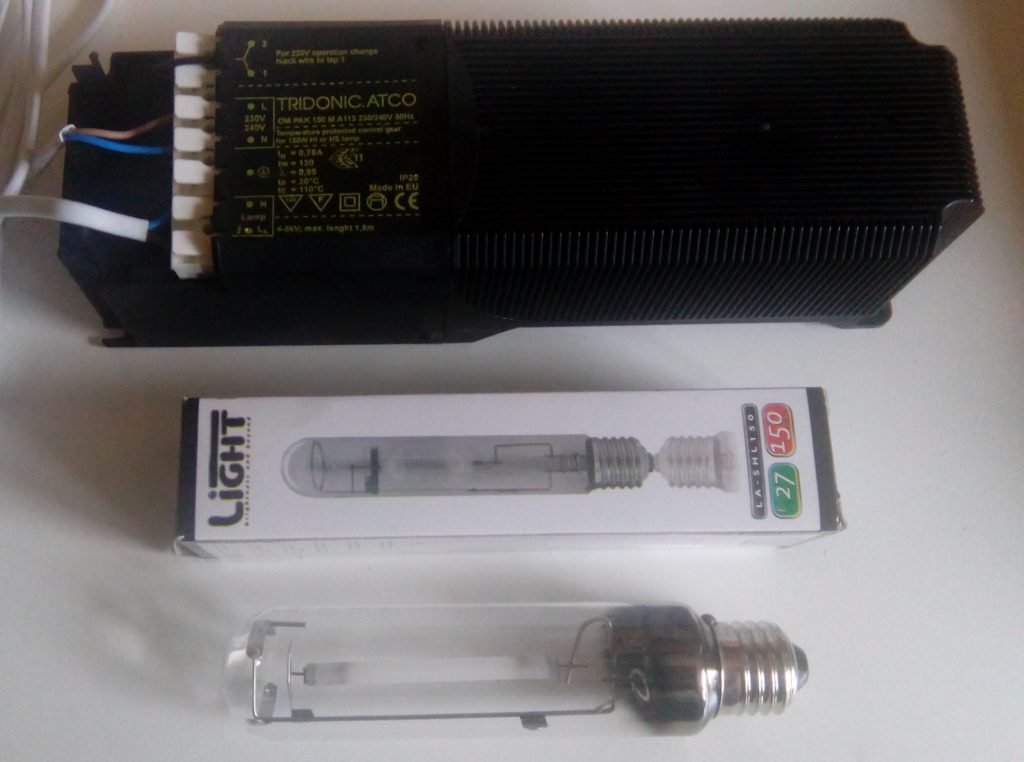 The picture below shows the lamp a few moments after the ignition : 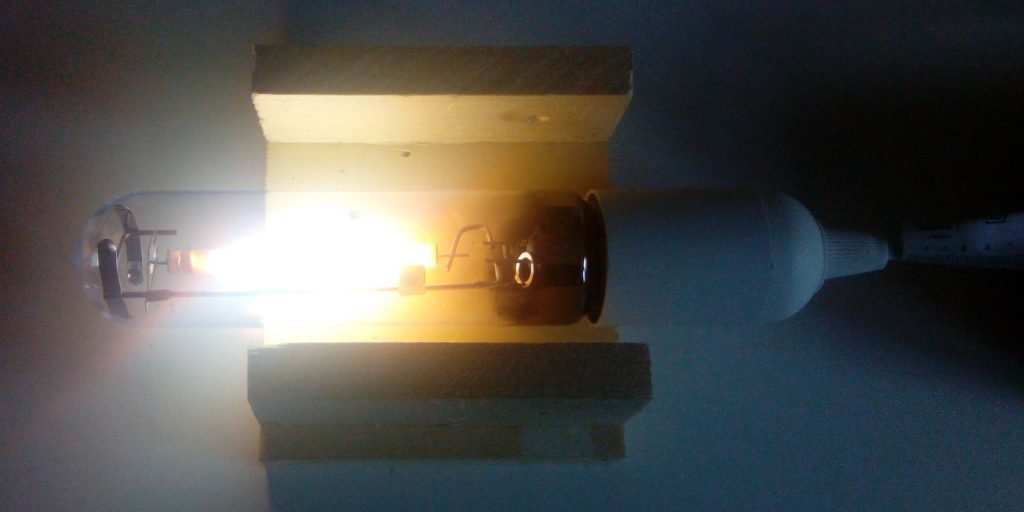 With cold lamp, the sodium emission line at 589 nm (doublet of sodium) is narrow and clear, a sign that we are in the presence of a low pressure vapor emission.

When the lamp begins to warm up the 589 nm line becomes progressively wider, especially towards the outer wings, and at the center, at 589 nm, the auto-absorption line caused by the colder outer layers of sodium vapor begins to become apparent . The shape of the line follows the Lorentzian profile, with narrow maximum and elongated external wings.

When the lamp is running normally, the initial line at 589 nm has now become a “continuous” ranging from 550 nm to 650 nm. Other emission lines are evident, among which we highlight the “infrared” doublet at 770 nm.

This activity has allowed us to experimentally examine, with our “poor” means, an interesting phenomenon such as the spectral lines broadening.
We recall briefly how this physical phenomenon is very much used in astrophysics because, from the study of the star spectra, it provides a great deal of information on the state of the star, such as the temperature and pressure of the gas and the rotation speed of the star itself.