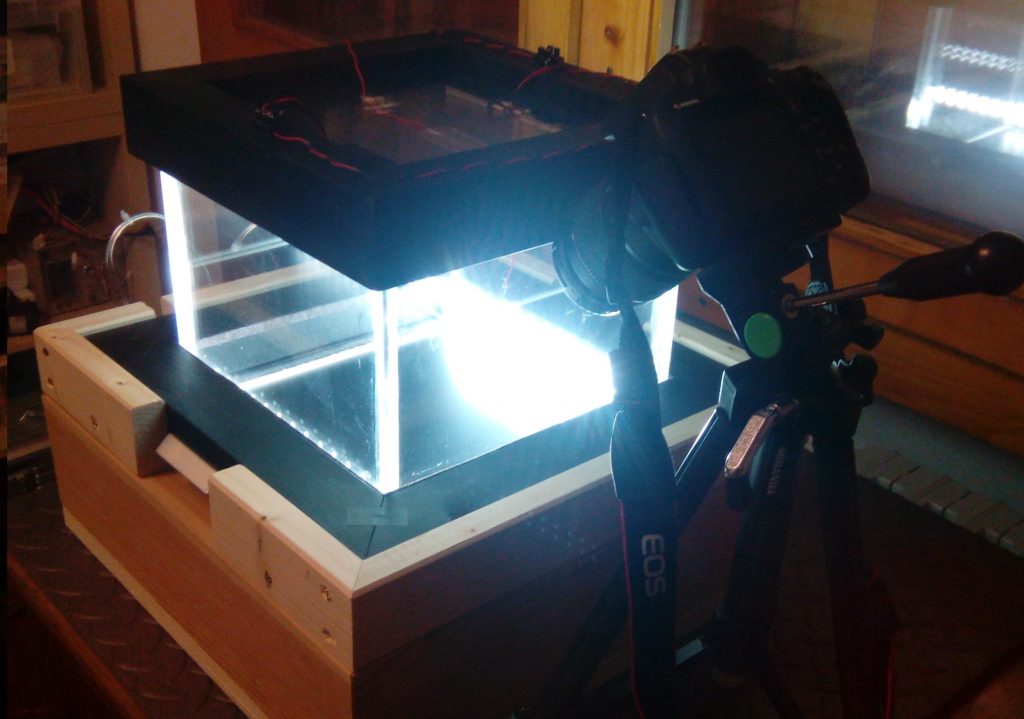 See the nuclear particles is possible! With a little patience, at PhysicsOpenLab we have built a cloud chamber, a tool that allows, for example, to reveal the traces of cosmic rays that are continually “raining” on Earth, coming from the remote regions of the universe.

A cloud chamber is nothing more than a well-sealed box containing an over-saturated alcohol vapor, so concentrated to be ready to condense as soon as something happens to change its condition. That is why when the detector is crossed by cosmic particles, which are electrically charged, the alcohol vapor condenses in very small droplets. The trace of the particles becomes so immediately visible in the form of a long and thin white trace that dissolves in a matter of seconds.

Building a cloud chamber, although it requires a lot of patience, is not difficult, neither expensive. In this post we describe the construction of “our” cloud chamber.

The cloud chamber we are building is a diffusion type cloud chamber. As mentioned above this cloud chamber is basically an airtight container filled with a mixture of air and alcohol vapor. Liquid alcohol evaporates from a reservoir and spreads inside the chamber. Cooling the base with dry ice (carbon dioxide ice at a constant temperature of -79 °C while subliming) you get an intense temperature gradient along the vertical direction. In this way, a super-saturated alcohol vapor zone is formed on the bottom. The sensitive layer is unstable: it has a quantity of cold alcohol vapor greater than it can maintain. The condensation process is triggered with the passage of the charged particle with enough energy to ionize atoms along its path. These ions are the condensing cores around which liquid droplets form a trace.
The image below shows the basic equipment.

The traces left by the particles depend on the particle type and their energy. α particles (helium nuclei) leave short and wide traces as their range in the air is just a few centimeters, β particles (electrons) give rise to thin, sometimes straight lines, sometimes with rough paths, depending on whether they are scattered or not. The most “spectacular” traces: clear, long and straight are produced by cosmic muons that are very energetic particles and therefore give rise to rather intense ionization.
The image below provides a representation of the typical traces visible in a cloud chamber. 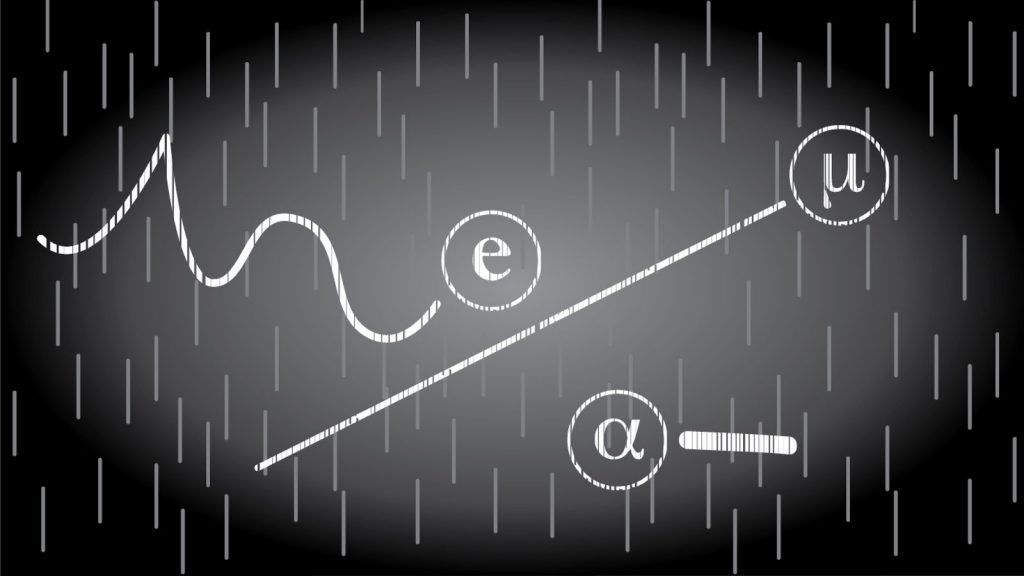 The cloud chamber is one of the oldest particle detectors, and it led to a number of discoveries in the history of particle physics. It also was involved in two Nobel prizes! 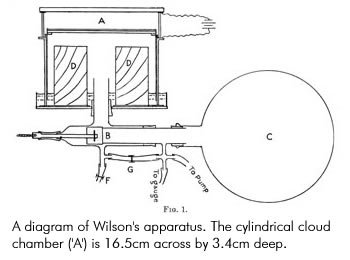 This Scottish physicist actually wanted to study cloud formation and optical phenomena in moist air. He discovered soon, that by accident he had invented a particle detector. He perfected the first (expansion) cloud chamber in 1911 and received a Nobel Prize in 1927.

This American physicist discovered the positron in 1932 and the 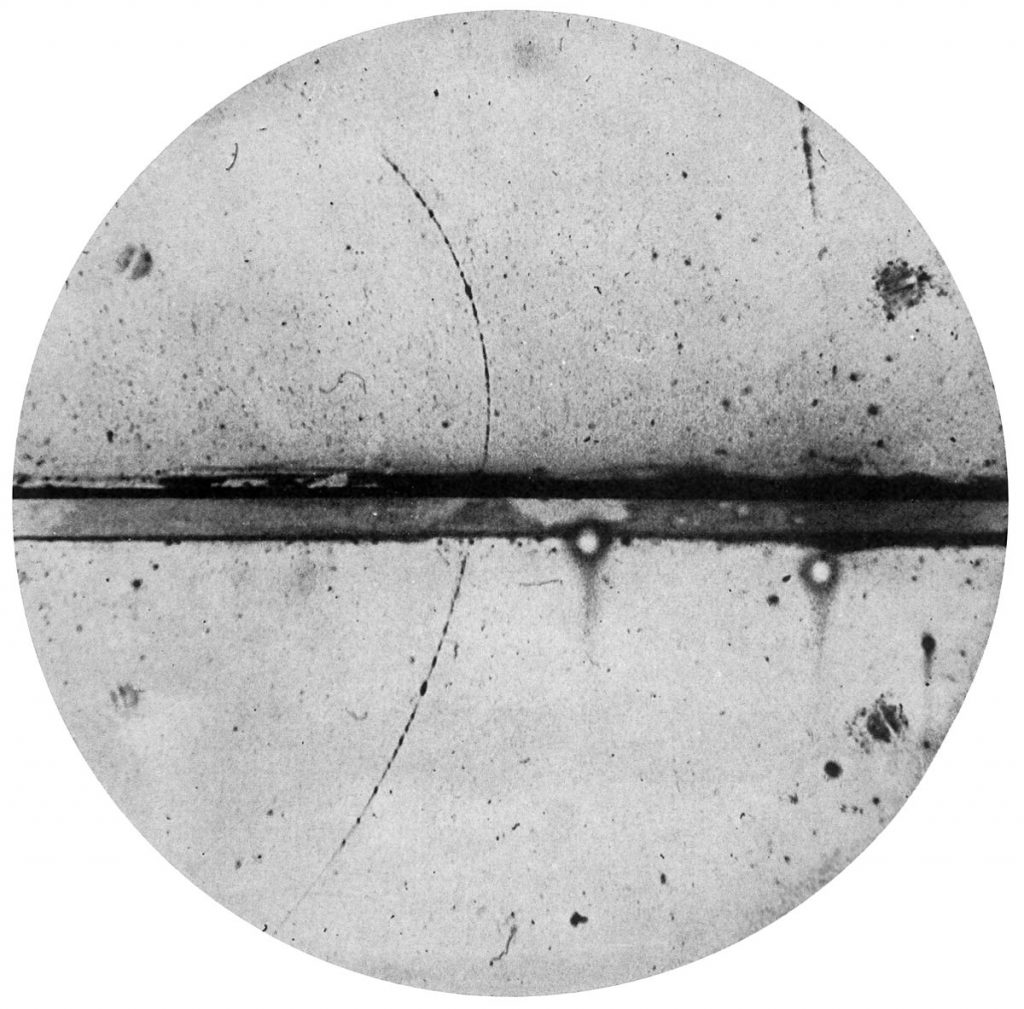 muon in 1936 using an expansion cloud chamber. He received a Nobel Prize in 1936. Anderson used alcohol instead of water to form a more sensitive mist and he applied a strong magnetic fields to his chamber.

The first component of the cloud chamber is the base that is intended to contain dry ice and provide adequate insulation to ensure maximum working life with a “dry ice” charge. For the stand we opted for a solid wooden structure, further internally insulated with expanded polystyrene plates (styrodur). At the center, a foam pad was placed in order to achieve the best contact between the dry ice and the aluminum base of the cloud chamber. The picture below shows the base of our cloud chamber. 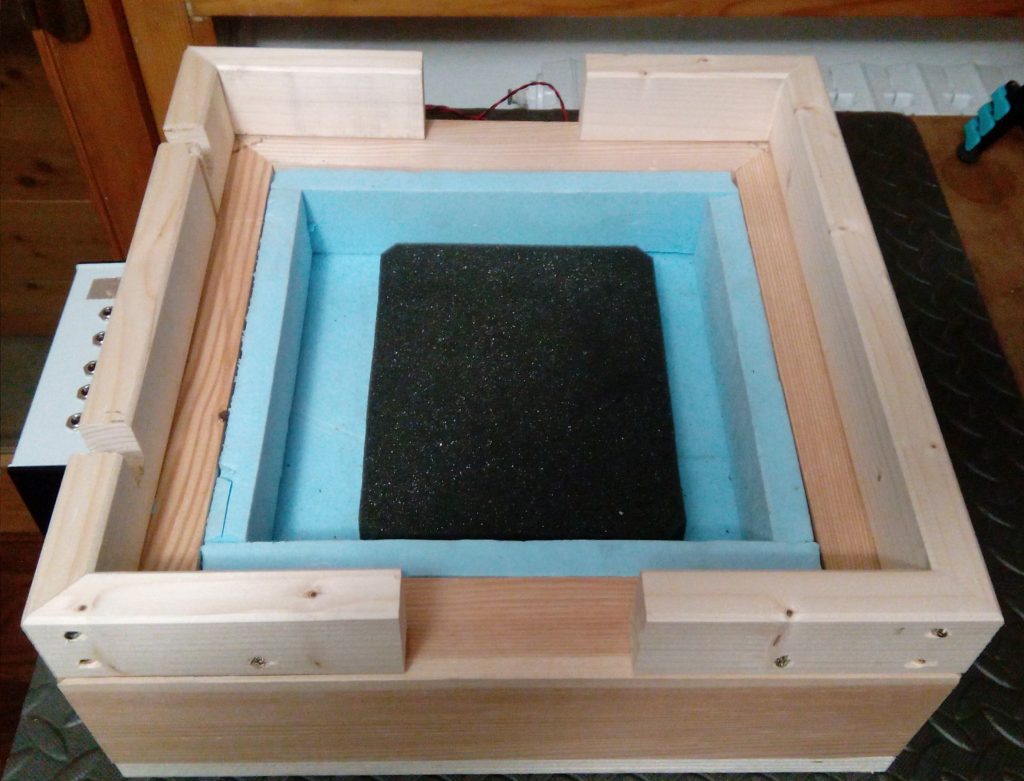 The outer dimensions of the stand are 40 cm x 40 cm, while the inside, insulated with polystyrene, has a smaller size: 30 cm x 30 cm, the space for dry ice is further reduced due to the polystyrene plates and the foam, this allows you to not “waste” too much dry ice during operation of the chamber. The image below shows the base filled with an adequate amount of dry ice. 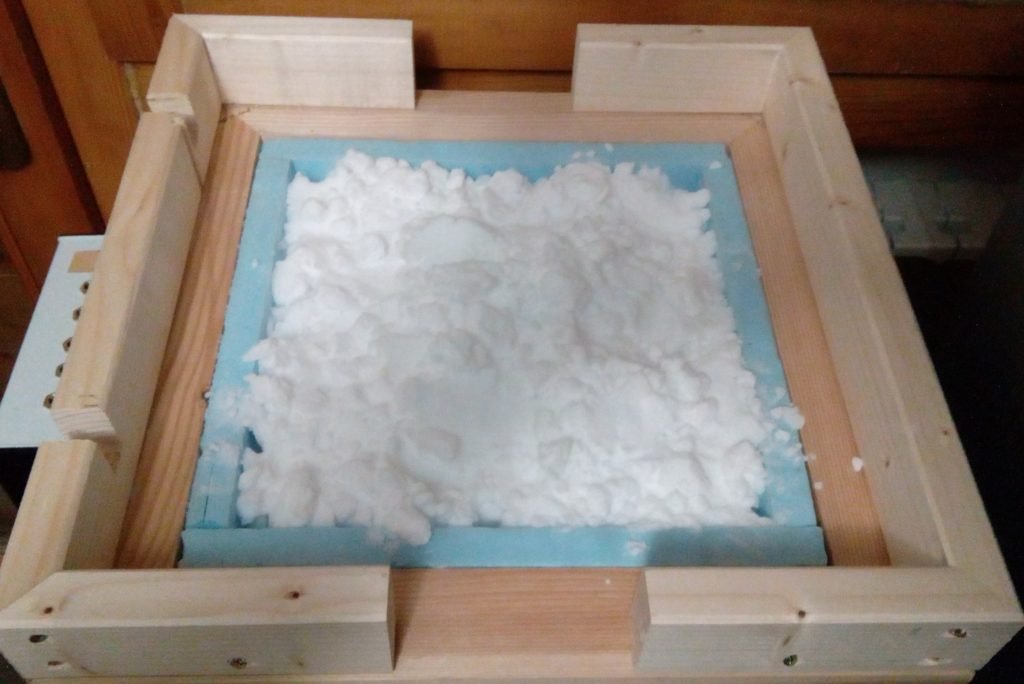 Dry ice (or carbon snow) is obtained by expanding compressed carbon dioxide, such as that found in fire extinguishers. For a run of our cloud chamber we need at least a couple of kilograms of carbon snow.
Carbon snow should be handled with care because it can cause cold burns: it is mandatory to wear protective gloves. It should also be stored in insulated containers, as shown in the image below, in order to preserve it as long as possible. 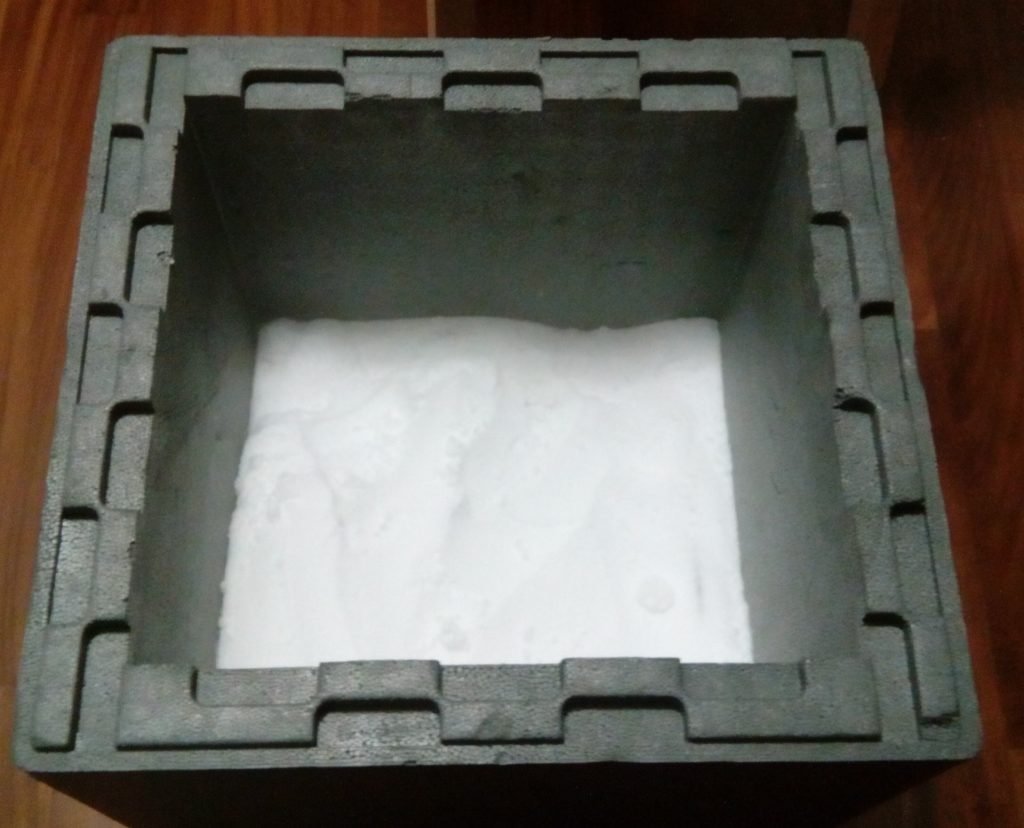 A black anodized aluminum plate, 2 mm thick, is placed above the base. This plate form the base of our cloud chamber, as shown in the following image. Aluminum is used because it is an excellent heat conductor, it is has to be black in order to highlight the traces of the particles. It is advisable to use black anodized aluminum rather than paint it as the paint easily disappears when the aluminum is cooled and comes into contact with the isopropyl alcohol. 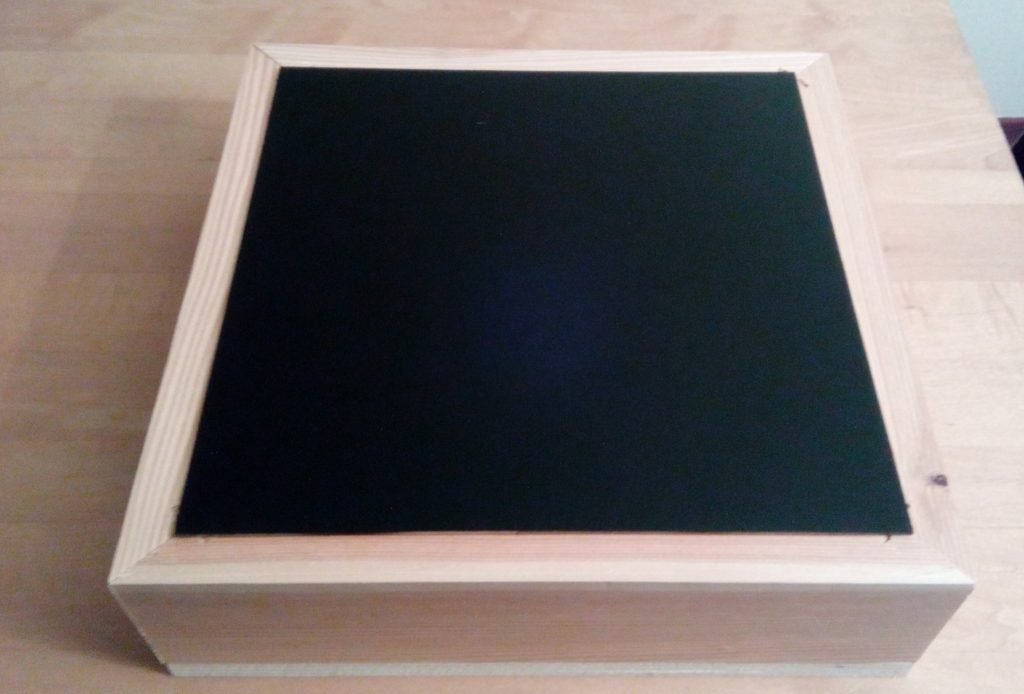 A wooden frame is secured to the aluminum plate to contain inside the actual cloud chamber. On two sides of the frame there are two grooves that are intended to accommodate two strips of led each. These LEDs are high power, powered by 12 Vdc, and are used for lighting. On the inside sides of the wooden frame are felt strips to make the chamber more stable and to prevent the plexiglass from scratching with the surface of the wood. 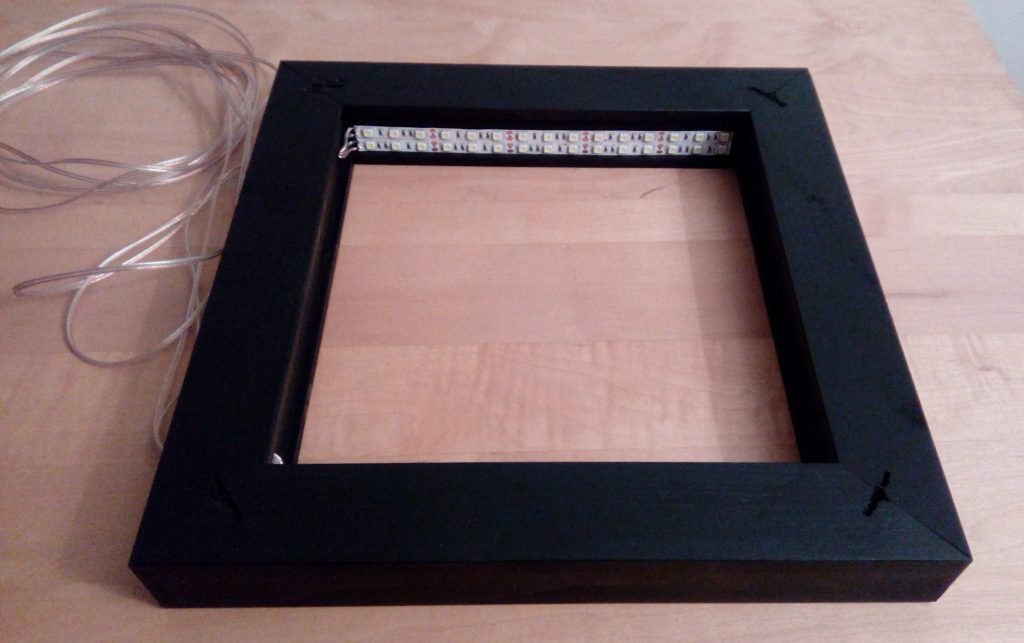 In the picture below you can see a detail of the LED strip.

The cloud chamber consists of four acrylic slabs glued together. Be careful that gluing of acrylic sheets should be done with a special procedure consisting in joining the parts to be glued and applying a solvent at the joint point. The solvent penetrates between the surfaces, melting a thin layer that immediately polymerizes again, thus producing a kind of welding. The picture below shows the acrylic sheets after the bonding operation. It may be necessary to put a transparent silicon veil along the joints to ensure the air-tightness of the chamber. 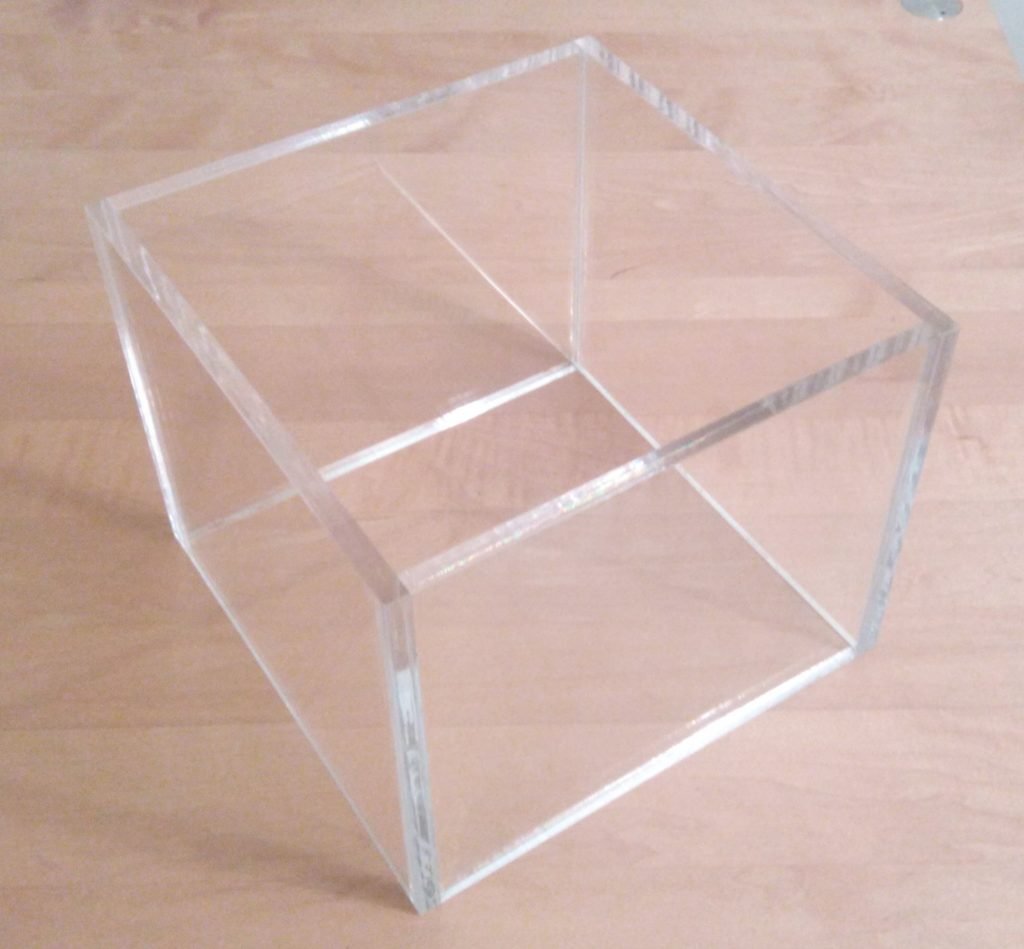 On the edges of the slabs (upper edge and bottom edge) silicon gaskets are then applied (the ones used for the fixtures are fine). The chamber is then inserted into the wooden frame and rested on the aluminum base, as shown in the picture below. 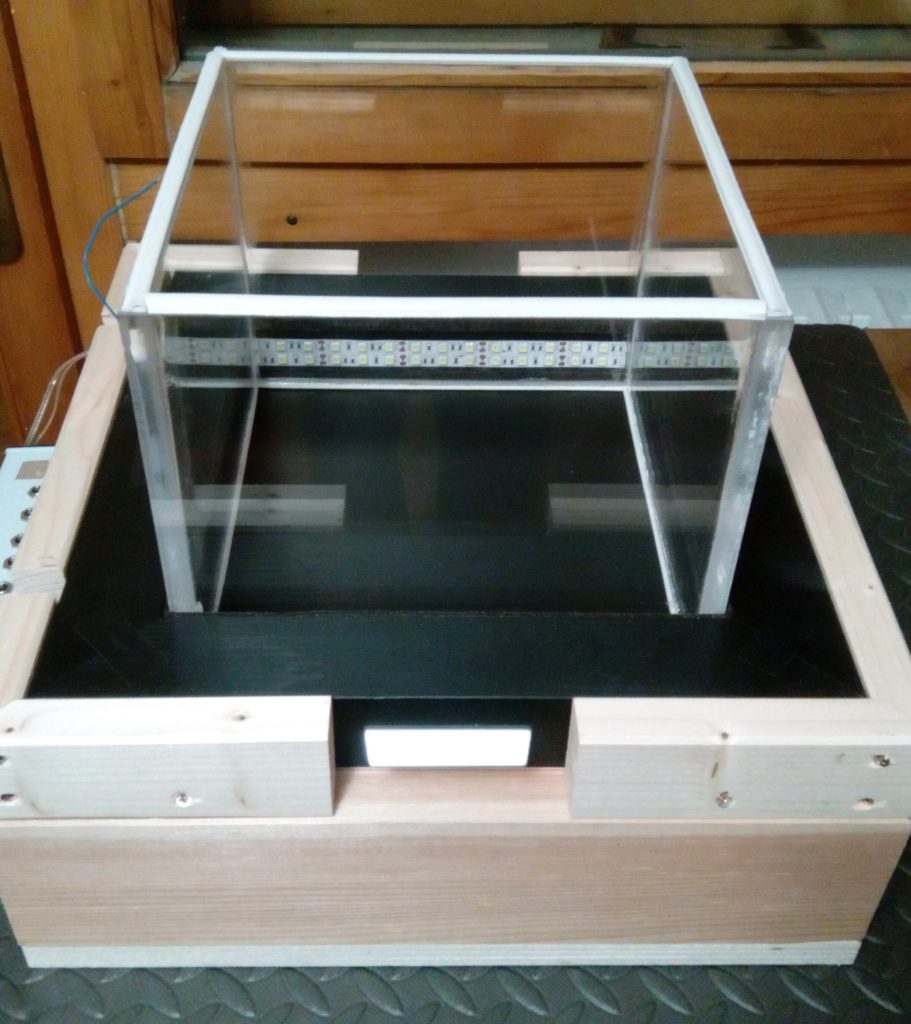 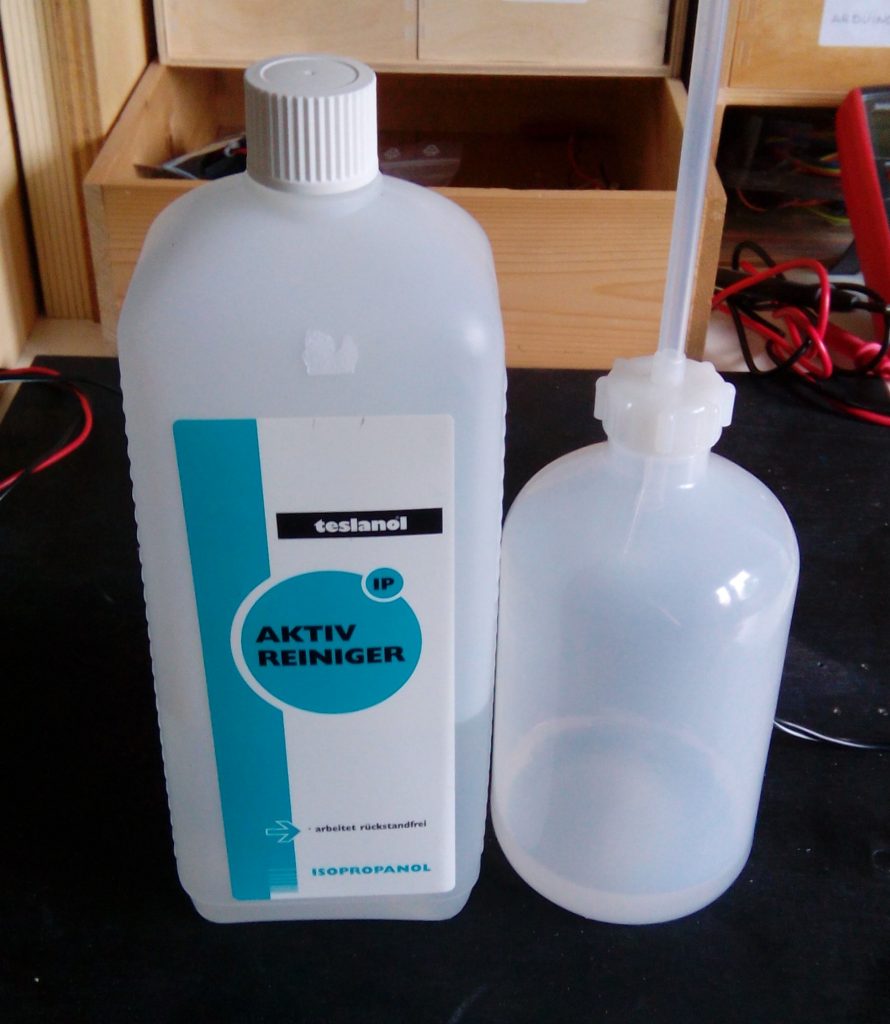 Isopropyl alcohol (or isopropanol) should be handled with care, its vapors are toxic and highly flammable.
The product we use is the brand teslanol, easily available as a cleansing product. It is important that the used alcohol is pure and does not contain water.
From scientific reports, the best results are obtained with isopropyl alcohol even if both ethyl alcohol and methyl alcohol are usable.

The equipment was completed with a control box that houses the four LED strips and electrical resistors control switches, all powered by 12 Vdc.

There is also the HV generator, whose outputs are connected to the upper aluminum plate and to the base. 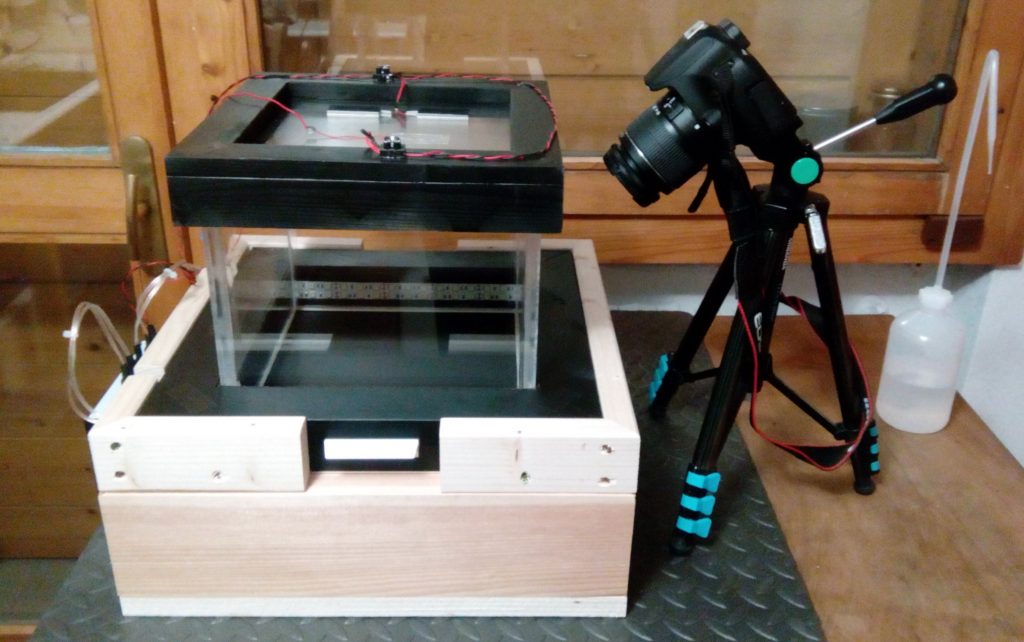 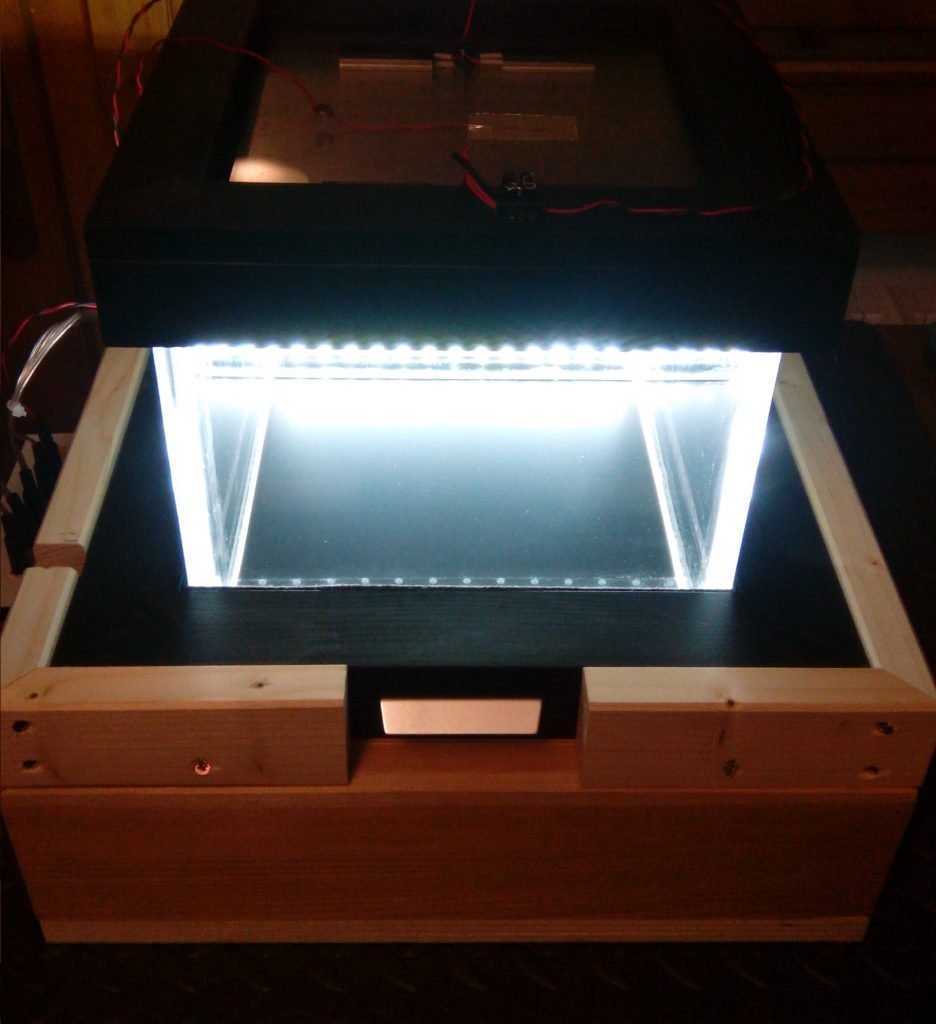 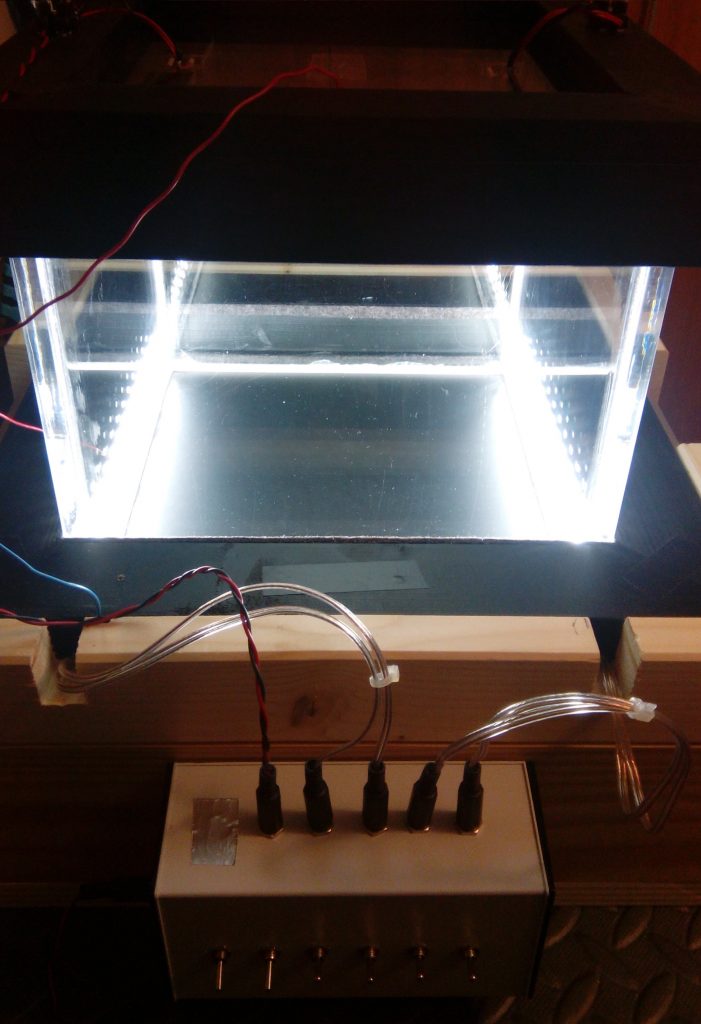 For the operation of the cloud chamber, it is necessary to have an adequate amount of dry ice or carbon snow which is to be inserted into the base of the chamber, taking care to ensure a good thermal contact with the aluminum plate. The felt on the top cover is dipped with isopropyl alcohol, but be careful not to use too much alcohol otherwise it will start to “rain” alcohol.
When this is done, close the chamber, start the heating resistors, the LED lights and the high voltage to deposit the dust.

After a few minutes you start to see a slight mist of very small droplets, if the drops are too much it means that too much alcohol is used. When the temperature and density of the alcohol vapor are the right ones, you can see the traces left by cosmic ray particles and background radioactivity.

If you have some sample source (alpha or beta), you can place it inside the chamber and see the traces of particles leaving the sample, as in the video below.

Maybe the right conditions are not found on the “first shot” but after a few attempts the result is ensured!

The cloud chamber of PhysicsOpenLab (described above) has recently been improved with some significant changes. 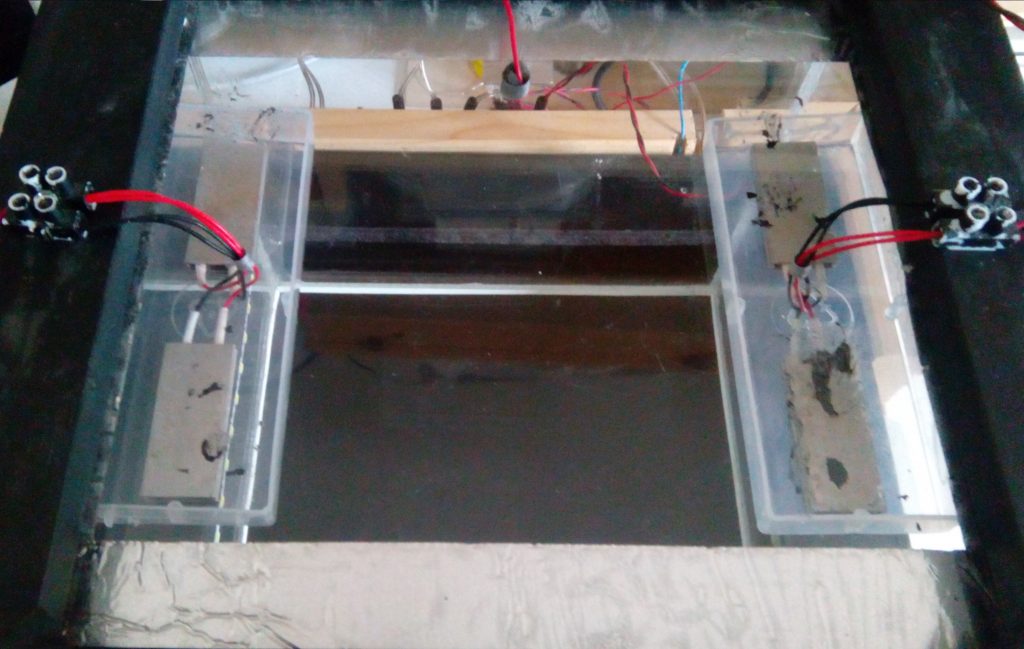