We propose, in this post, the use of XRF spectrometer, previously described, for the analysis of some minerals in order to identify the contained elements. 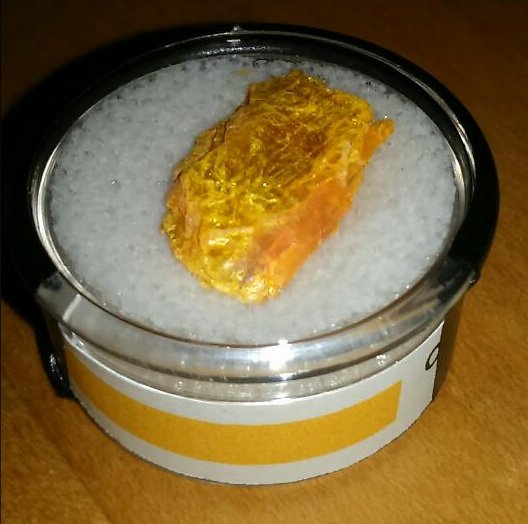 Realgar ( orpiment ) is a mineral containing arsenic. This mineral has been widely used in the past as a mineral color. 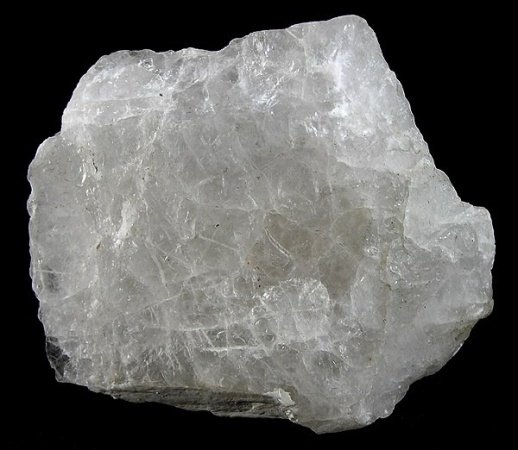 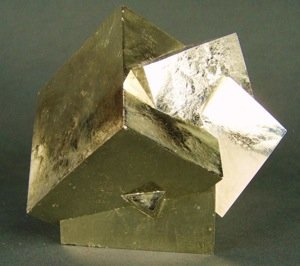 The mineral pyrite, or iron pyrite, also known as fool’s gold, is an iron sulfide with the chemical formula FeS2. This mineral’s metallic luster and pale brass-yellow hue give it a superficial resemblance to gold, hence the well-known nickname of fool’s gold. The color has also led to the nicknames brass, brazzle, and Brazil, primarily used to refer to pyrite found in coal. 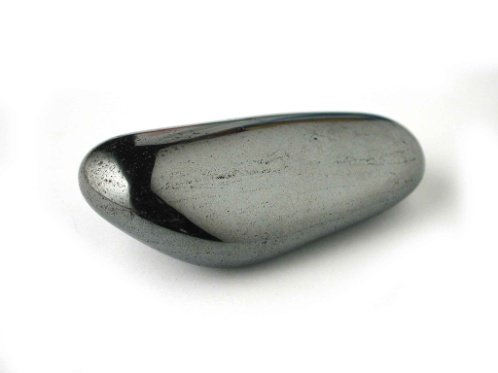 Hematite, also spelled as haematite, is the mineral form of iron(III) oxide (Fe2O3), one of several iron oxides. Hematite crystallizes in the rhombohedral lattice system, and it has the same crystal structure as ilmenite and corundum. Hematite and ilmenite form a complete solid solution at temperatures above 950 °C (1,740 °F).
Hematite is a mineral, colored black to steel or silver-gray, brown to reddish brown, or red. It is mined as the main ore of iron. Varieties include kidney ore, martite (pseudomorphs after magnetite), iron rose and specularite (specular hematite). While the forms of hematite vary, they all have a rust-red streak. Hematite is harder than pure iron, but much more brittle. Maghemite is a hematite- and magnetite-related oxide mineral. 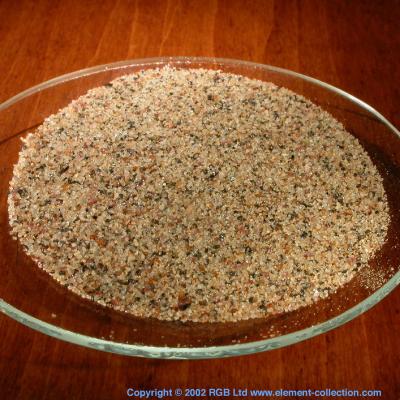 Monazite is a reddish phosphate mineral containing rare earth metals. It occurs usually in small isolated crystals.  There are at least four different kinds of monazite, depending on relative elemental composition of the mineral:

The elements in parentheses are listed in the order of their relative proportion within the mineral: lanthanum is the most common rare earth element in monazite-(La), and so forth. Silica (SiO2) is present in trace amounts, as well as small amounts of uranium and thorium. Due to the alpha decay of thorium and uranium, monazite contains a significant amount of helium, which can be extracted by heating. Monazite is an important ore for thorium, lanthanum, and cerium. Monazite is radioactive due to the presence of thorium and, less commonly, uranium. Because of its radioactive nature, monazite is a useful for radiometric dating of geological events, such as crystallization, heating, or deformation of the rocks containing monazite. 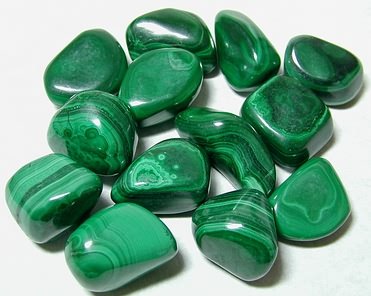 Malachite is a copper carbonate hydroxide mineral, with the formula Cu2CO3(OH)2. This opaque, green banded mineral crystallizes in the monoclinic crystal system, and most often forms botryoidal, fibrous, or stalagmitic masses, in fractures and spaces, deep underground, where the water table and hydrothermal fluids provide the means for chemical precipitation. Individual crystals are rare but do occur as slender to acicular prisms. Pseudomorphs after more tabular or blocky azurite crystals also occur. 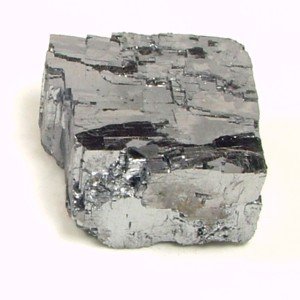 Galena, also called lead glance, is the natural mineral form of lead(II) sulfide. It is the most important ore of lead and an important source of silver.
Galena is one of the most abundant and widely distributed sulfide minerals. It crystallizes in the cubic crystal system often showing octahedral forms. It is often associated with the minerals sphalerite, calcite and fluorite. 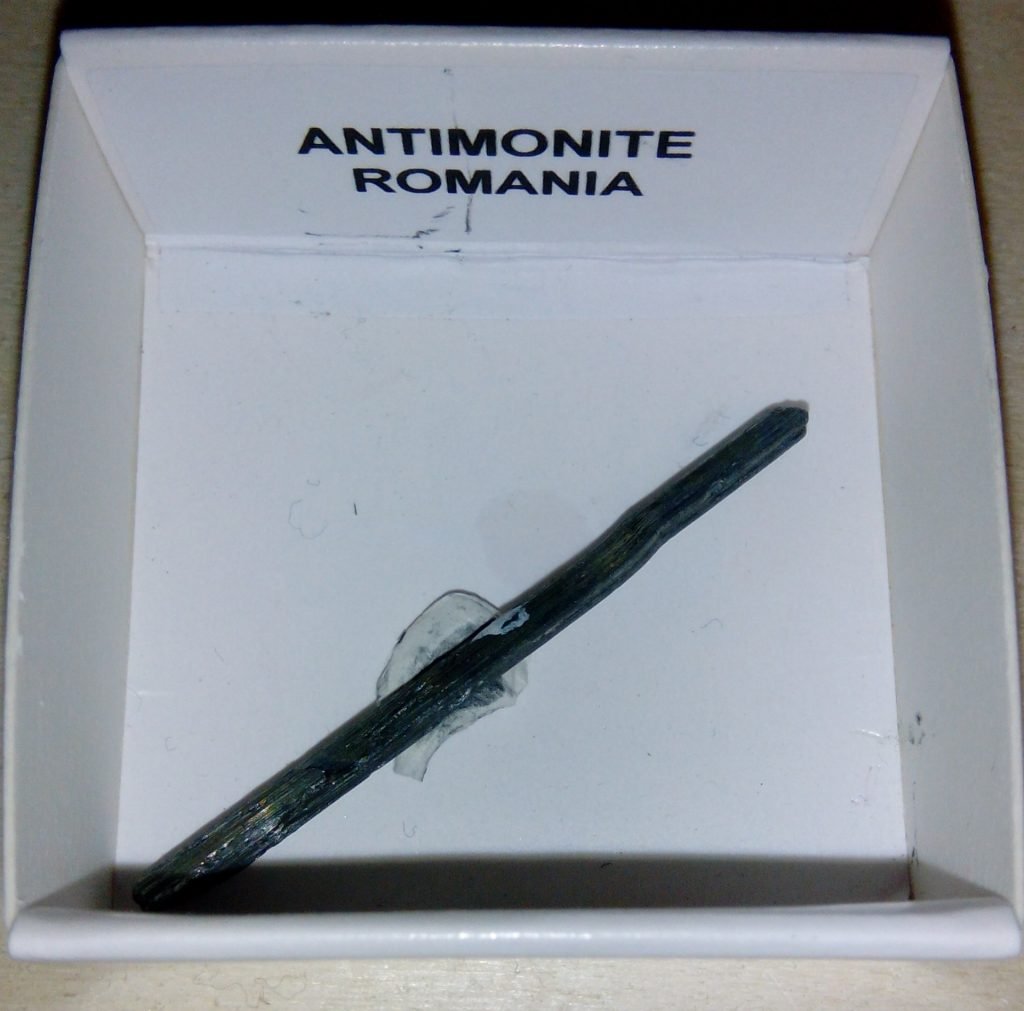 Stibnite, sometimes called antimonite, is a sulfide mineral with the formula Sb2S3. This soft grey material crystallizes in an orthorhombic space group. It is the most important source for the metalloid antimony. The name is from the Greek στίβι stibi through the Latin stibium as the old name for the mineral and the element antimony. 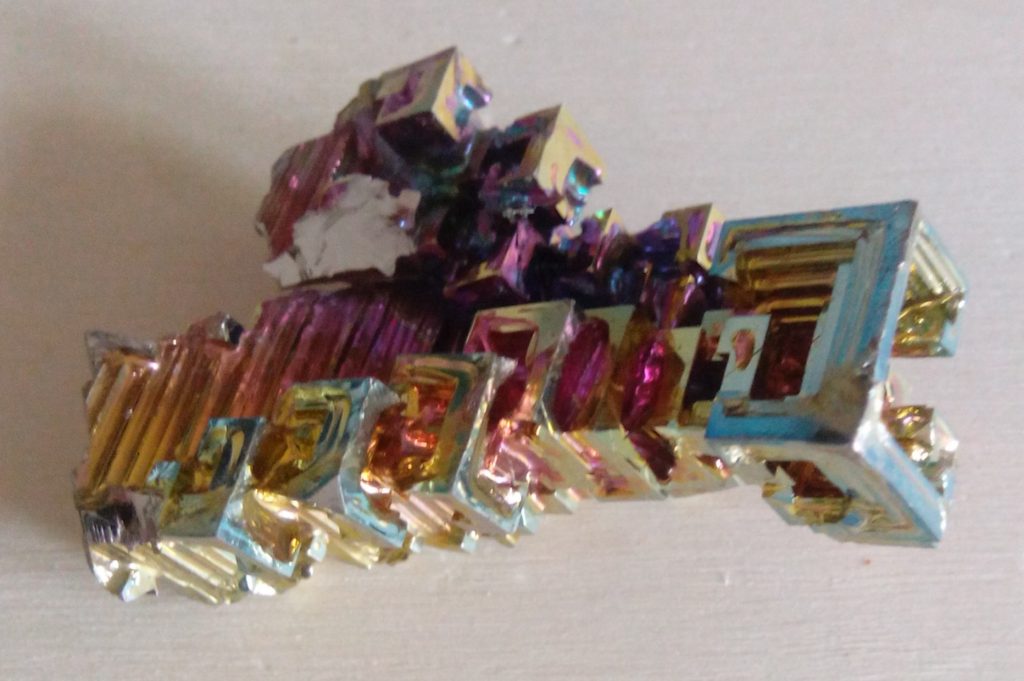 Bismuth in highly pure form can form iridescent crystals, generally sold as collectibles. The color is given by a thin layer of bismuth oxide. 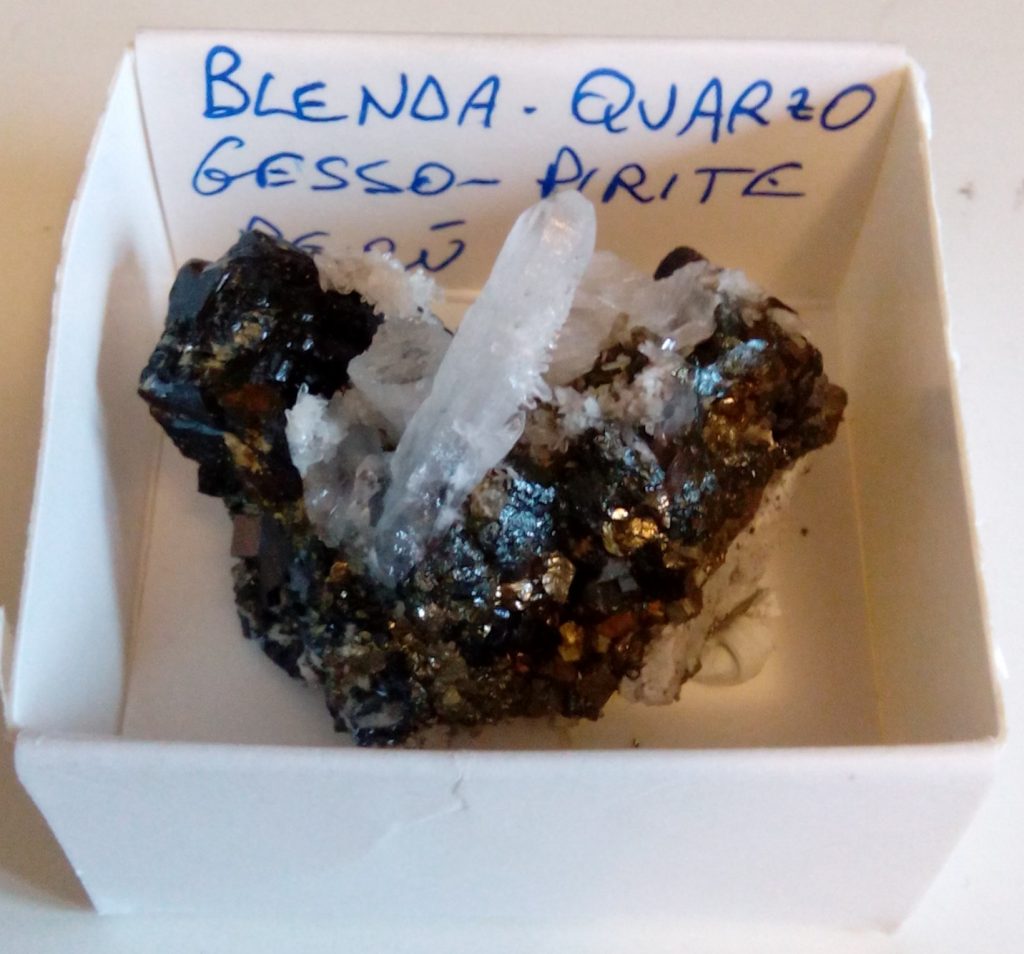 Sphalerite ((Zn, Fe)S) is a mineral that is the chief ore of zinc. It consists largely of zinc sulfide in crystalline form but almost always contains variable iron. When iron content is high it is an opaque black variety, marmatite. It is usually found in association with galena, pyrite, and other sulfides along with calcite, dolomite, and fluorite. Miners have also been known to refer to sphalerite as zinc blende, black-jack and ruby jack. 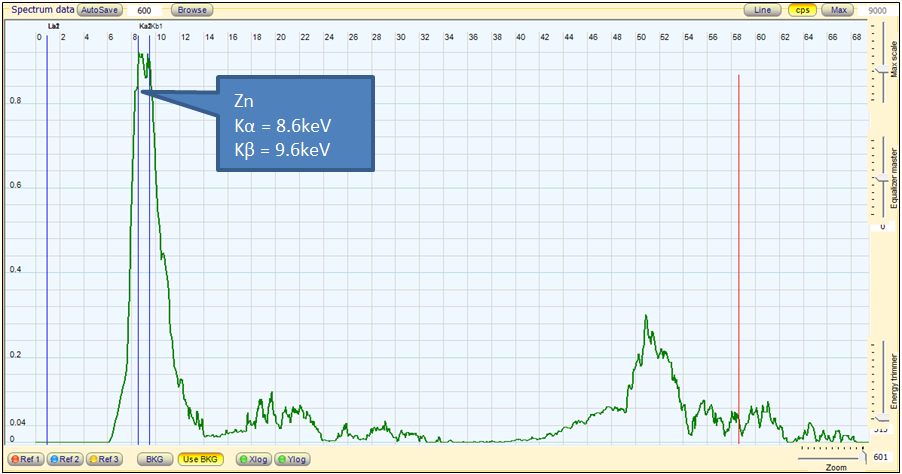 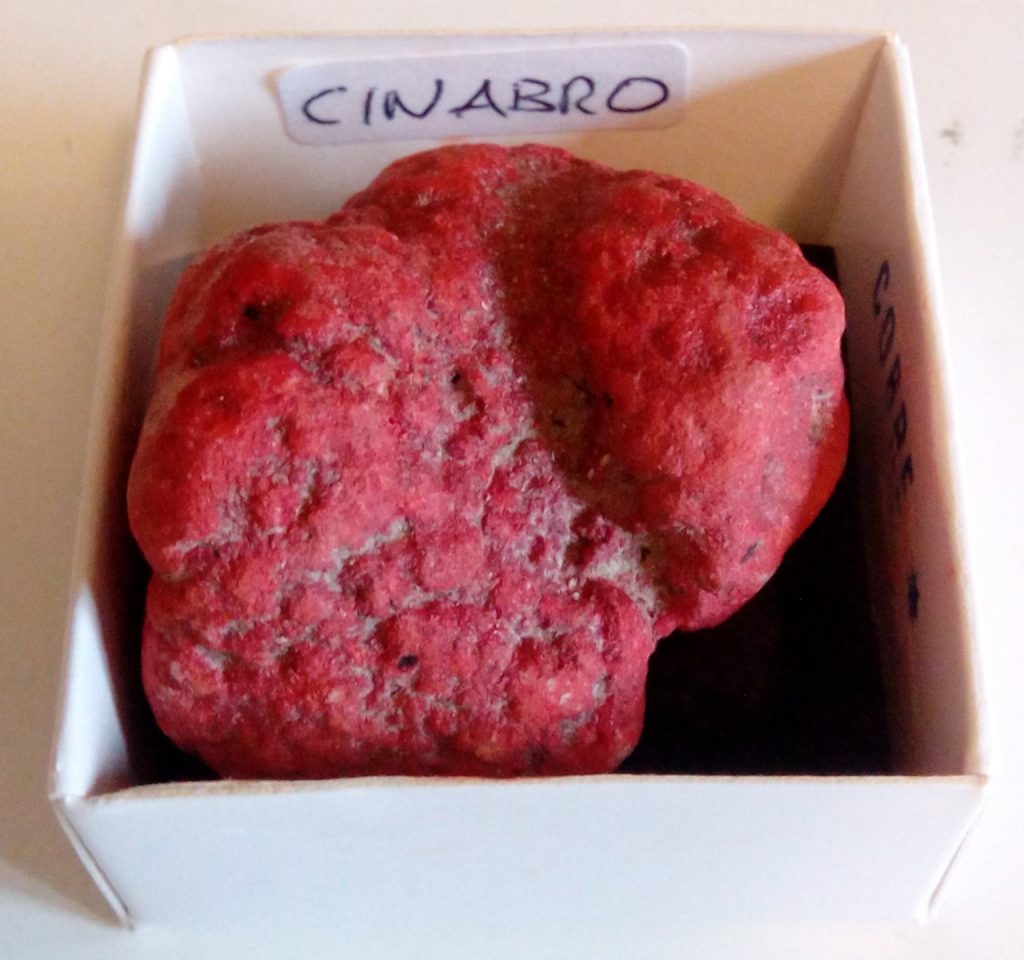 Cinnabar and cinnabarite, likely deriving from the Ancient Greek: κιννάβαρι (kinnabari), refer to the common bright scarlet to brick-red form of mercury(II) sulfide, formula HgS, that is the most common source ore for refining elemental mercury, and is the historic source for the brilliant red or scarlet pigment termed vermilion and associated red mercury pigments. Associated modern precautions for use and handling of cinnabar arise from the toxicity of the mercury component, which was recognized as early as ancient Rome. 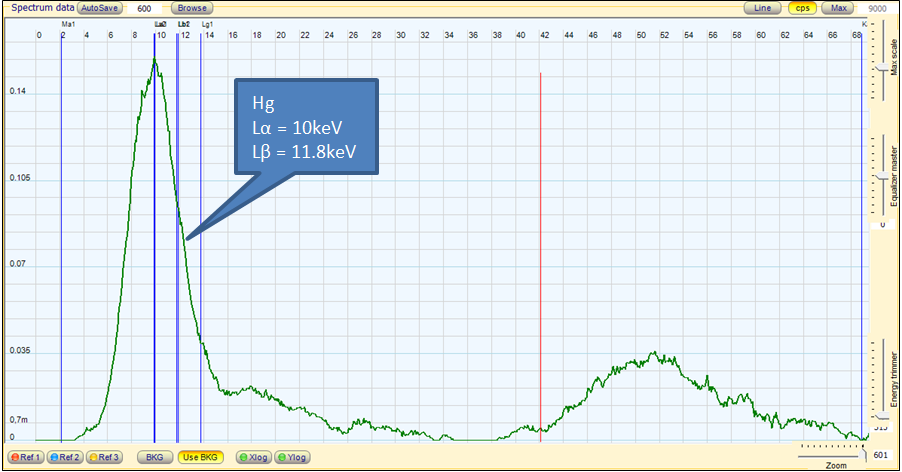 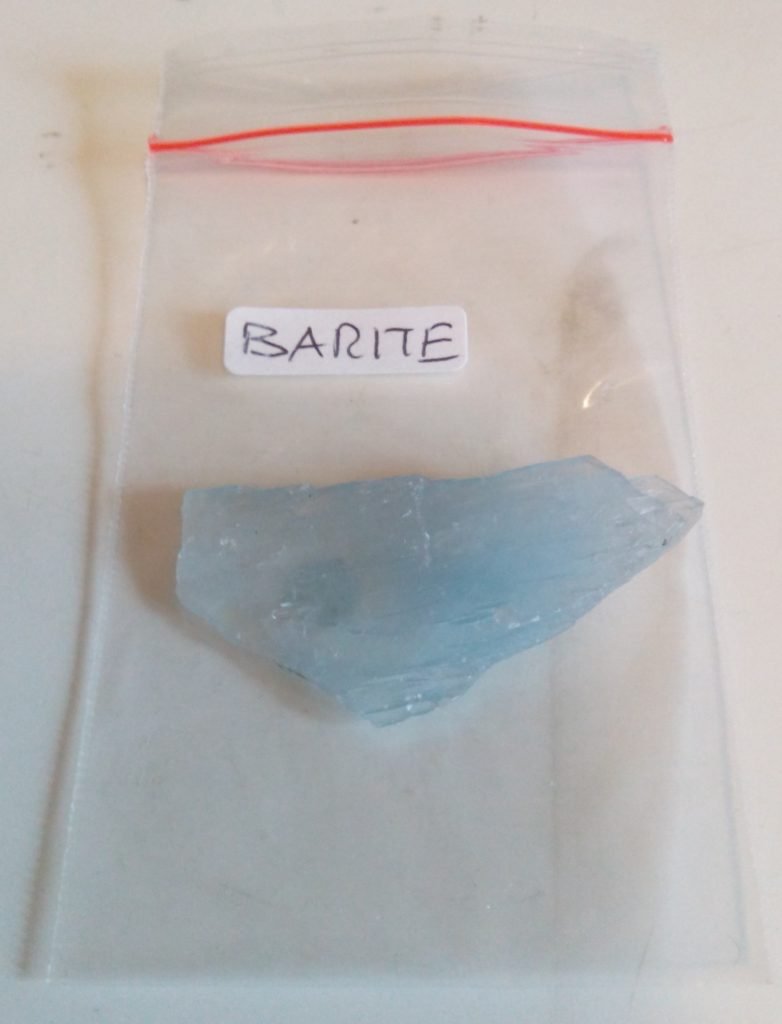 Baryte or barite (BaSO4) is a mineral consisting of barium sulfate. The baryte group consists of baryte, celestine, anglesite and anhydrite. Baryte is generally white or colorless, and is the main source of barium. Baryte and celestine form a solid solution(Ba,Sr)SO4. 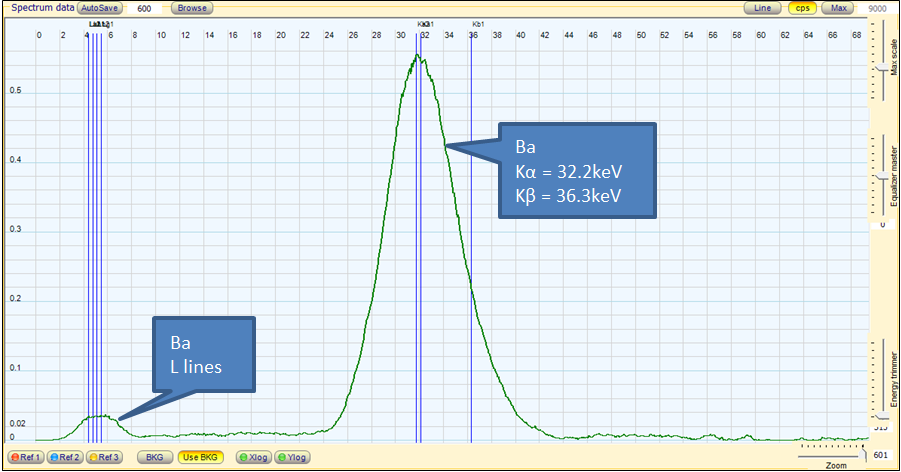