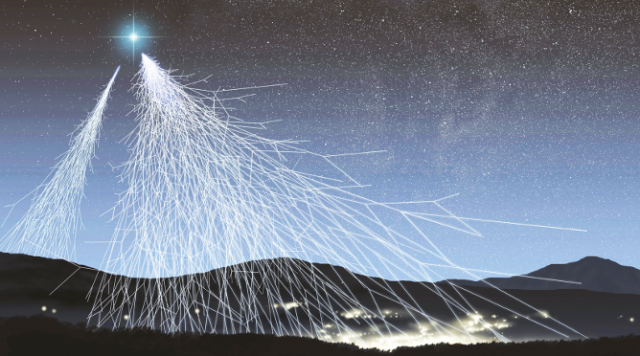 The secondary radiation at sea level is made of two components (soft and hard) that behave differently when passing through very dense materials (iron, lead , …).
The soft component (about 30% of the secondary radiation), which is made of electrons and photons and in small part by protons, kaons and nuclei, is able to pass through only a few inches. While the hard component (about 70%), composed of muons, can penetrate thicknesses of absorbent materials of more than one meter.
The average flux of the particles that make up the radiation which reach the sea level is estimated to be

In the simulation made by H. Drescher, shown below, you can see the cosmic shower originated by a single primary proton. Of course, only a small percentage of the particles produced are displayed. Color identifies the different particles:
blue:electrons/positrons
cyan:photons
red:neutrons
orange: protons
gray: mesons
green:muons

Cosmic rays have an angular distribution with respect to the normal to the Earth surface that can be described by the function :

The particles that make up the radiation have high energy. It is estimated that the average flux at sea level has an average energy of 3 GeV. The μ lepton (muon), the main component of the secondary cosmic rays, is an elementary particle with spin 1/2, mass equal to 105,65 MeV and mean life of 2,2µs. As mentioned earlier, the μ are produced mainly in the upper atmosphere by the decay of particle π. At the production time they have relativistic speeds and because of the phenomenon of time dilation they can reach the sea level.

The two geiger tubes are arranged one above the other, aligned with each other, the distance between the two sensors is about 1 cm. A lead screen, 1.2 mm thick, is placed above the first sensor and below the second with the aim to shield the sensors from the background radiation originating in the alignment direction of the two tubes. Another plate of lead is placed between the two tubes in order to shield the second geiger from any radiation coming from the first tube.

With these expedients, contemporary events recorded by the sensors are thus exclusively those caused by particles moving in the direction of alignment of the sensors, with enough energy to overcome the lead foil. Particles with these characteristics are almost exclusively cosmic ray with “extra-terrestrial” origin.
The alignment of the tubes, the coincidence circuit and the shields make sure that the recorded events are definitely due to secondary cosmic ray muons (see chapter on the theory of cosmic rays). However the counting rate will be slightly less than the theoretical value due to the limited detection angle, as shown in the following diagram.

The two sensors are placed in a tilting frame in order to perform measurements at various angles with respect to the normal to the earth surface.
The radiation intensity (particles flux) should be maximum at an angle of 90o to the horizontal (frame in vertical position) and little or null at an angle of 0o (frame in horizontal position). This difference is due to the different thickness of the atmosphere that cosmic rays have to pass through depending on the direction of origin.

The geiger tubes, SBM-20 type, are powered by a Geiger Adapter Theremino. the pulses from the geiger detectors are sent to a coincidence circuit, which performs a logical AND of the two signals. This signal is then sent to a Theremino Master connected to a PC with the software Theremino Geiger for data collection.

If the two GM tubes (Geiger Muller), emit a pulse at the same time, the U1B gate detects this coincidence with an output pulse. Contemporary pulses may be randomly generated by two contemporary disintegration, but the likelyhood is very low : about one chance in one hundred thousand (given that the pulses of the tubes last about 100 uS and that only few pulses per minute occur). So, if an event is detected, we can say with 99.999 % chance, that was detected a cosmic ray. The outputs of the two geiger adapter and the output from the coincidence detectors are connected to the Theremino master inputs configured as counters. The two independent geiger can be used for making measurements of radioactivity, while the output of the coincidence detector is used to perform counting measurements of cosmic ray flux .

We report the results of measurements of the cosmic ray flux performed with the detector above described. The measurements were made ​​at different times of the day and for every angle was adopted an integration time equal to 3600s (1h).

The detector measures values less than the theoretical ones due to the fact that the detection angle is limited (see construction scheme), for this reason, the theoretical values have been normalized so as to match the maximum.

From the results we can appreciate a good agreement with normalized theoretical data, this is a proof of the effectiveness of the system in discriminating events due to cosmic rays from spurious events, due to background radiation or due to electronic noise.