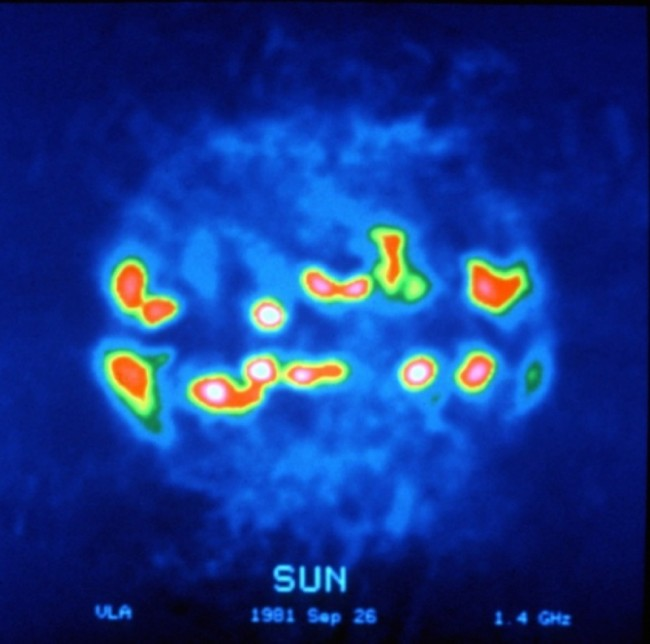 The Sun is the easiest astronomical radio source to detect and measure. The surface of the Sun that we observe in the visible is called photosphere, but radio emissions also arise in the chromosphere and in the solar corona that make up the solar atmosphere. The photosphere has a temperature of about 6000 °K and, even if the plasma at this temperature emits more in the visible and ultraviolet range, thanks to the proximity of the sun we can also record its radio emission.

The situations of quiet Sun and active Sun must then be distinguished. During the “quiet sun” phases, the emission is at a minimum, while in the phases of solar activity, characterized by many spots and solar flares, the emission can be considerably higher.

The solar radiation spectrum covers all frequencies from radio to optical (infrared, visible, and ultraviolet). In the optical range (100 nm to 1000 nm wavelength), the Sun can be treated with excellent approximation as a blackbody with a constant temperature of about 6000 °K.
As shown in Figure below, the solar flux density is equal to that from a blackbody radiator at 6000 °K at wavelengths less than about 1.0 cm (a frequency greater than about 30 GHz), but the spectral density becomes much greater at longer wavelengths for both a quiet and active Sun (solar flares). An active Sun has much larger flux density than does a quiet Sun in the frequency range between 100 MHz (3-m wavelength) and 30 GHz (1 cm wavelength). These elevated fluxes come mainly from the contribution of the solar corona and the chromosphere, a thin layer just above the visible photosphere.

What we propose is to measure, with our DIY radio telescope, the radio emission of our sun at the frequency of 11.2 GHz which corresponds to a wavelength of 2.68 cm and to obtain the brightness temperature. From the graph above it appears that the emission spectrum deviate slightly from the black body curve, so we expect a brightness temperature a little higher than the temperature of 6000 ° K.

The first operation that must be performed before the observations is the calibration of the radio telescope. It is recommended to activate the system and keep it on for a while so that the operating temperature stabilizes. The calibration operation consists in pointing the antenna towards a “cold” source such as the clear sky and towards a “hot” source such as the ground. It is assumed that the brightness temperature of the clear sky is about 10 °K while that of the ground is about 300 °K. Take note of the power value returned by the system and enter these values ​​in the radiometer GUI: at this point you can use the calibrated mode which directly returns the value of the brightness temperature of the source pointed to by the antenna (for details, see previous posts on amateur radio astronomy).

The records below show the values ​​obtained by alternately aiming for the clear sky and the ground. In the first graph we report the results for a band of 2.5 MHz, while in the second the 10 MHz band was used. As is correct and as we expect, with the 10 MHz band the power detected by the system is much greater. 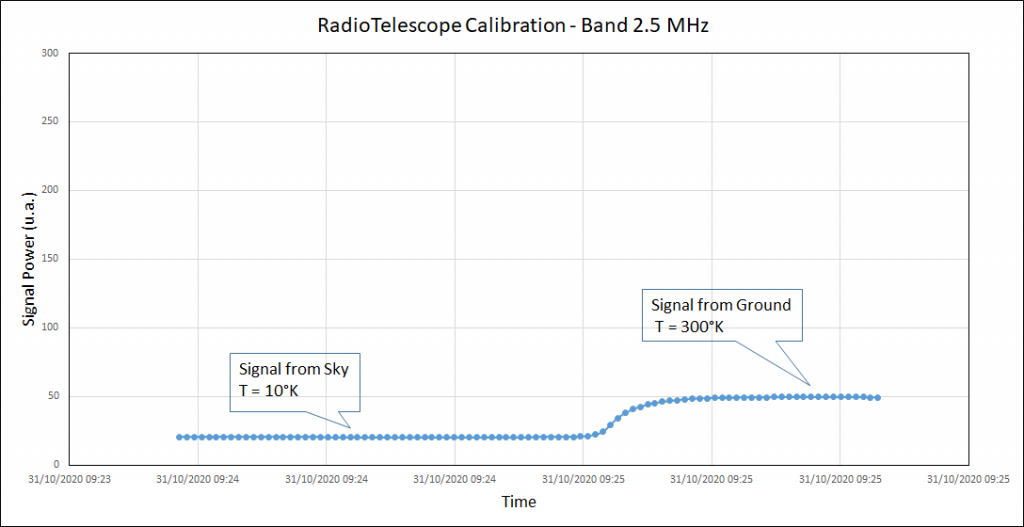 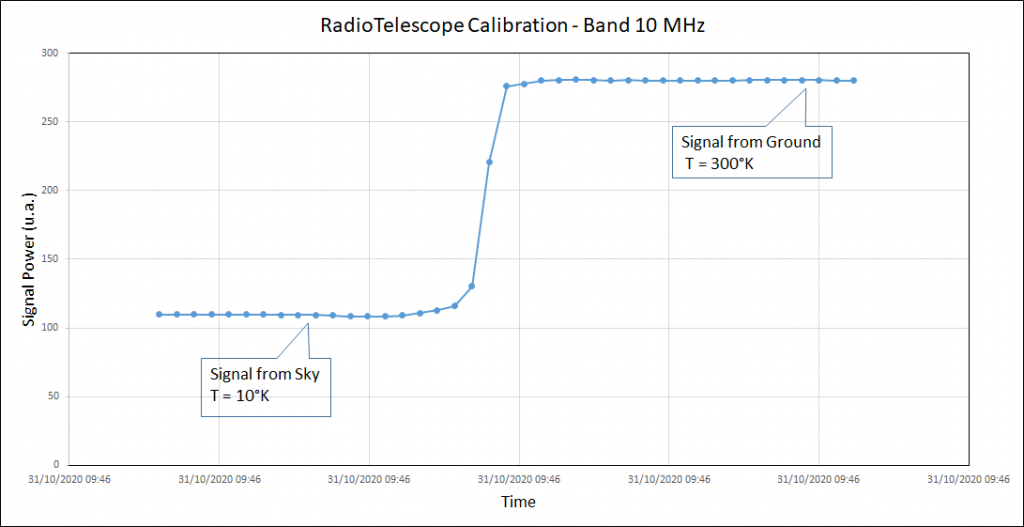 After calibration, you can proceed with pointing the antenna towards the Sun. In our system, pointing is done manually. While orienting the antenna, the signal recorded by the radiometer is checked in order to obtain the maximum value: when the value is maximum, it means that the antenna is correctly pointed towards the Sun. At this point, saving data on file is started, in order to obtain the registration of the transit. The following image shows the graphic interface of our radiometer with the Total Power value graph. 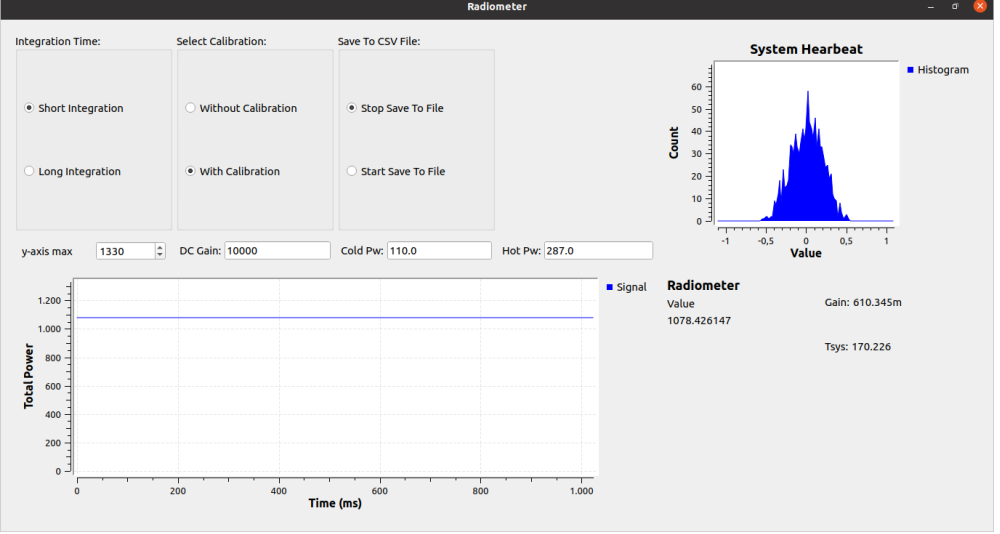 Our solar transit record is “halved”. Given the difficulty of correct manual pointing of the antenna, it is easier to center it directly on the solar maximum and then follow the decreasing signal rather than point it towards a future position of passage of the Sun. The graphs below show the results obtained on a 2.5 MHz band. and on a 10 MHz band. The graphs show the time on the abscissa and the brightness temperature on the ordinate. The results are very similar to each other. Both record a maximum brightness temperature of 1100 – 1200 °K and a decreasing trend approximated quite well by a Gaussian curve. 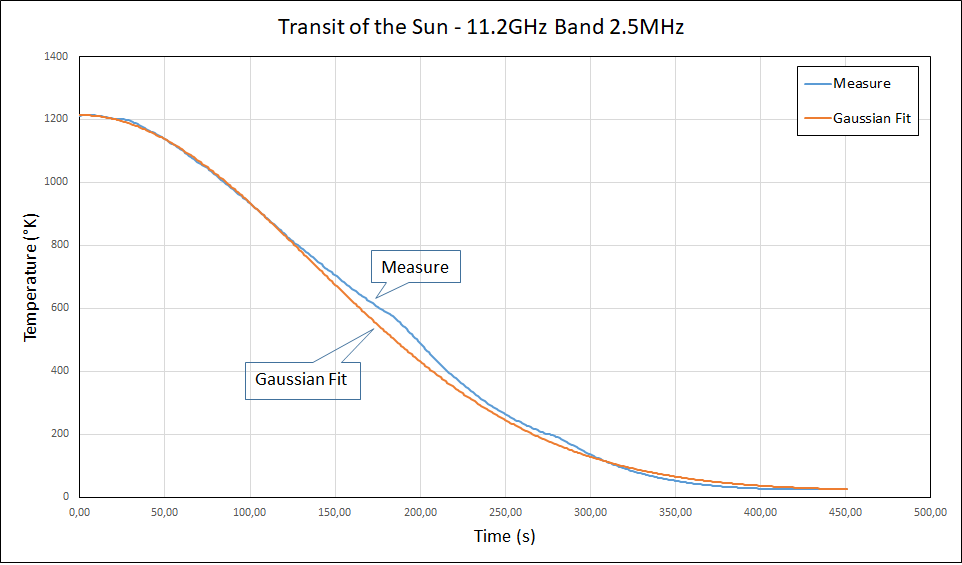 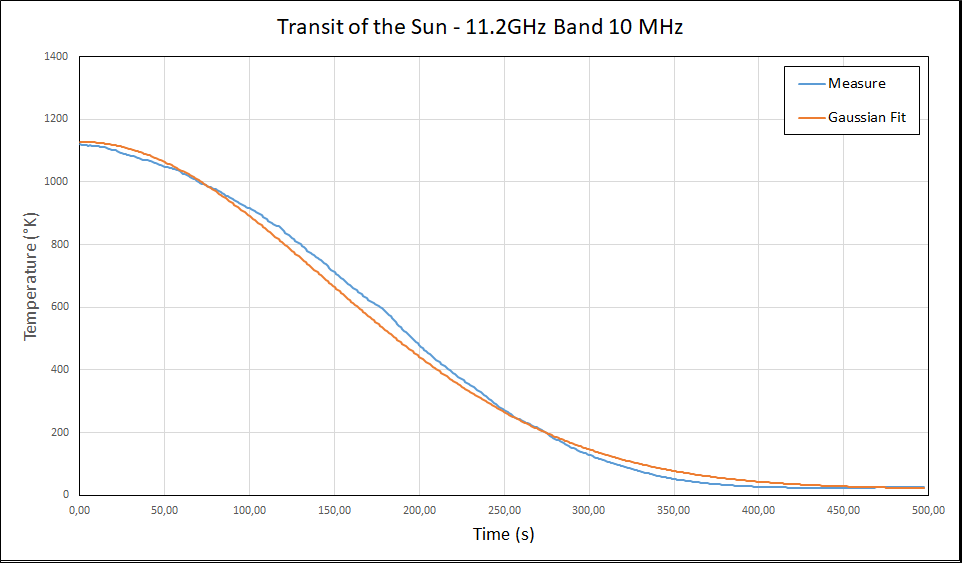 With the measurement data we want to try to derive the brightness temperature of the Sun. The first factor we must take into account is the solid angle subtended by the beam of our antenna. In the following drawing we compare the image of the Sun and the beam of our antenna: as you can see, the antenna lobe is much wider than the solar image. In practice, the value measured by our antenna is a sort of average over the whole beam width: the result is that the solar radiation is diluted over a much larger surface and the measured value is consequently much lower. Technically, the output signal produced by the system is the spatial convolution between the antenna diagram and the radiation diagram of the source. 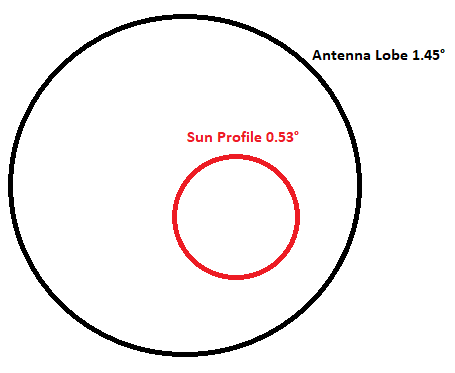 The angle θ is shown on the abscissa graph, while the intensity normalized to the arbitrary value is on the ordinate I0 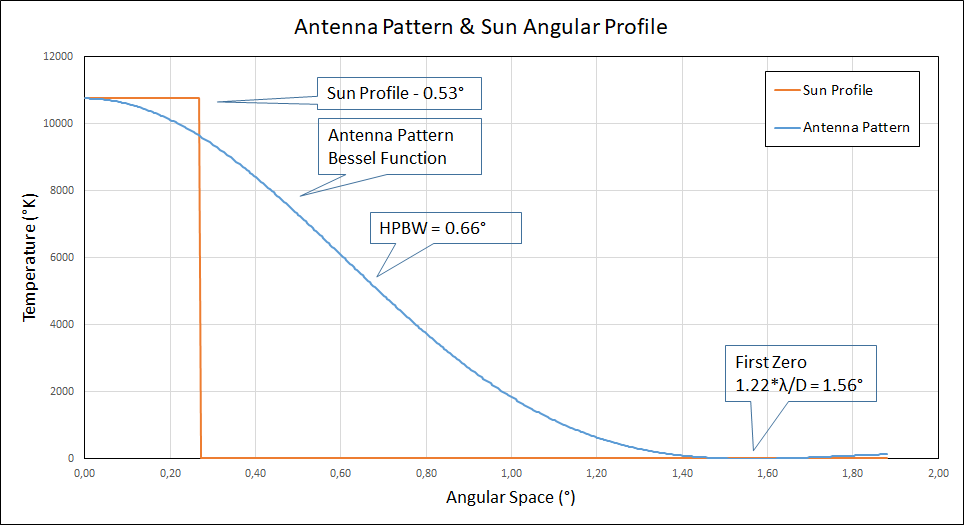 Since the radiation pattern of solar radiation is much narrower than the antenna pattern, the convolution of the two functions will be very similar to the somewhat enlarged antenna pattern. However, we have not done the calculation but the graph obtained from the registration of the transit, which we report below in “angular” terms instead of time, has the expected trend. 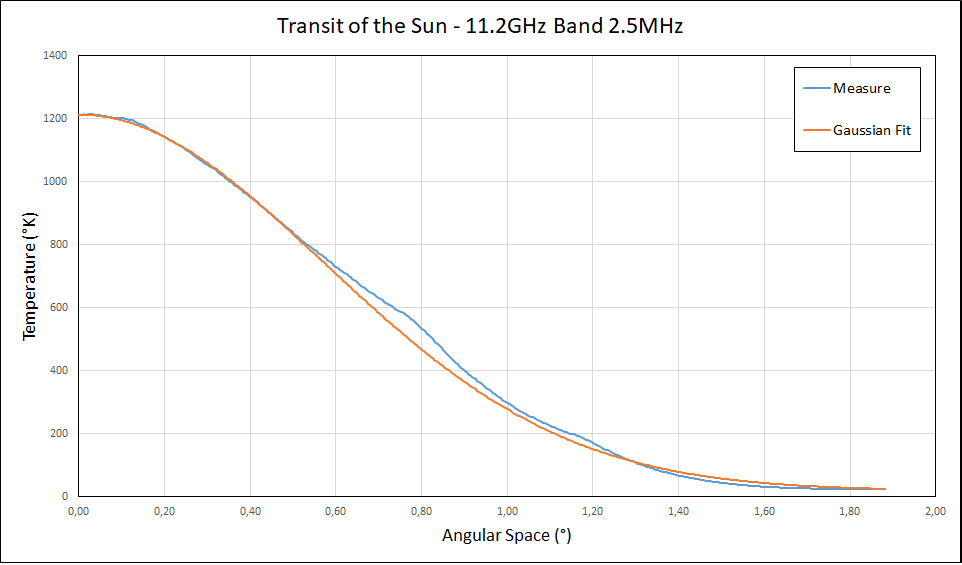 For the determination of the equivalent brightness temperature we can use the following relationship:

Comparing this value with the actual temperature of the solar surface, of 6000 °K, we can say that already at 11 GHz the behavior of the sun begins to deviate from the law of the black body, as mentioned in the introduction to this post.

We have seen that even with an amateur device you can make measurements of a certain accuracy. The big limitation of our radio telescope is the difficulty and poor pointing accuracy. With a source like the sun it is easy to center the antenna but with weaker sources it could be a problem. 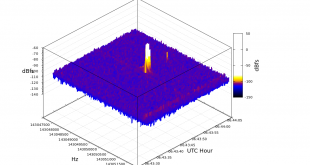 PDF Abstract : in this post we want to present some results obtained with our …