GNURadio is licensed under the GNU General Public License (GPL) version 3 or later. All code is copyright of the Free Software Foundation.

GNURadio uses a combination of Python and C++, where Python handles the high level interface and C++ is used to implement drivers and low level interfaces to the hardware. This combination allows for a system that is easy to use, but still meets the performance required for handling large amounts of data.
GNURadio also has a rapid development tool called GNU Radio companion (GRC). GRC is a simple to use graphical system for designing and building radio components in software.
GNU Radio Companion provides common functions, such as signal sources, signal processing and signal sinks, as blocks that can be picked and placed on the screen. Once placed, the blocks can be wired up, much like in LabView, and the fow of data can be controlled in this fashion. GNU Radio Companion also includes blocks that allow for building a GUI interface, which can be used to display data and control the software defined radio.
If a block does not exist, it can be created. Because GNURadio uses Python, users can use this powerful and fexible language to build new blocks that can be imported into GRC.

GNURadio is a very complete system, which requires a learning period to fully appreciate its complexity and wealth of functionality. We will limit ourselves to the aspects that most directly affect our project. For descriptions, explanations, examples on GNURadio we have collected the following links.

The GNU Radio application is easily installed on Linux. It can be used, with some difficulties, also on other operating systems but the use of Linux is strongly recommended. We have installed it on a Ubuntu 20.04 Linux distribution.
We operate from the terminal and use the apt install command. First we install some dependencies:

Then we proceed to install the gnuradio application, the OsmoSDR drivers for the SDR hardware and for Airspy :

At this point the installation of the last versione of GNURadio (now 3.8) should be completed. By connecting Airspy to the USB socket and typing the command

recognition by the PC should be verified and the main card data obtained.
To start the GNURadio application just type the following command from the terminal: 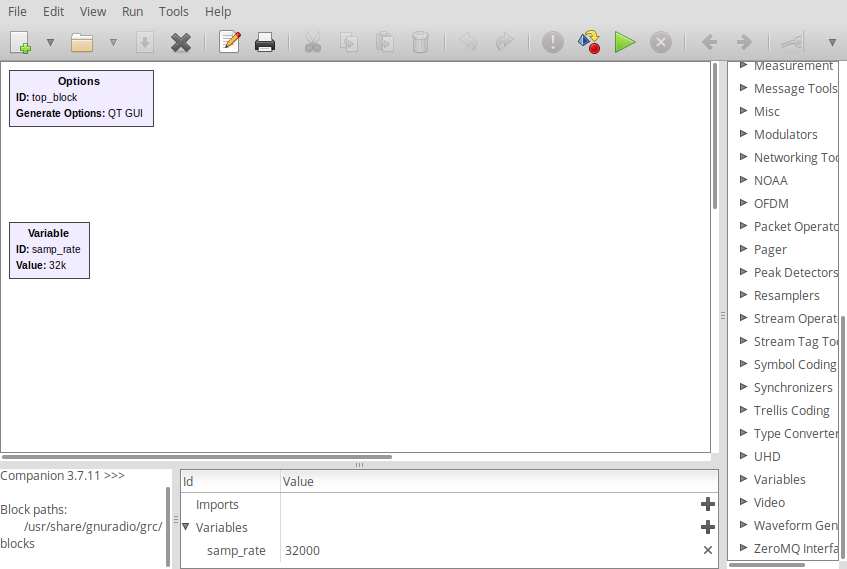 The GNURadio application we need is basically a radiospectrometer. The signal picked up by the antenna and subsequently amplified and filtered by the RF components is sent to the SDR receiver which acquires it in digital format. At this point the signal must be processed in order to calculate its power spectrum and highlight the signal peak corresponding to the emission at 21cm. The spectrometer, in its simplest form can be described by the following block diagram :

For the processing of the RF signal acquired by the airspy R2 SDR receiver we used the GNURadio program spectrometer_w_cal.grc which is part of a larger project of the DSPiRA working group. This is a truly remarkable project of the research group in Radio Astronomy of the University of West Virginia which aims to make available to enthusiasts, teachers and students a set of documentation and tools for the practice of radio astronomy research.
Thanks to the authors of the software and in particular to Kevin Bandura, Glen Langston and Pranav Sanghavi.

The software allows the acquisition of the signal and the determination of its power spectrum. In particular, there are the calibration function with the acquisition of the “Hot” and “Cold” spectrum. The spectrum is displayed on the screen and can be saved to a file in csv format. The gain and equivalent system temperature are also displayed on the screen. Furthermore, the integration time of the signal can be chosen between two values, by default set at 0.1s and 10s.

The diagram below shows the entire block diagram of the program as it is displayed by GNURadio. GNURadio also generates a python executable. The program can be run by launching the corresponding python file or by opening the .grc source in GNURadio and running it within the GNURadio environment. We prefer to go for GNURadio in order to have more control over the process.

There are some variables to be configured according to the environment and others that can be changed to modify the spectrometer : 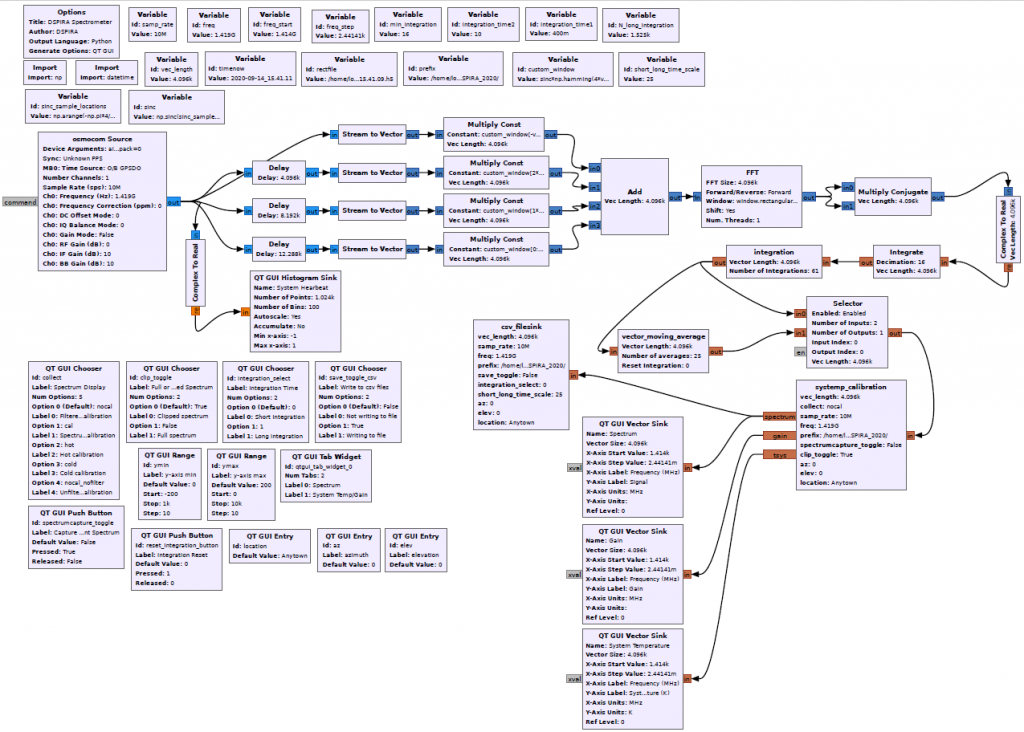 For details on the software, please refer to the DSPiRA website and the documentation found on the repository, we will limit ourselves here to some notes on some general aspects. The osmocomm Source block is the interface to the Airspy R2 SDR hardware. In our case we don’t use the bias-T option so in the argument string we put “airspy=0,bias=0,pack=0“, the Sample Rate and Frequency parameters take the value from the program variables. The RF gain is set to 0, while the IF and BB gains are set to 10dB. We have found that this gain configuration with our RF hardware allows for good system utilization. With different amplification chains, these parameters can, of course, be varied in order to optimize performance. 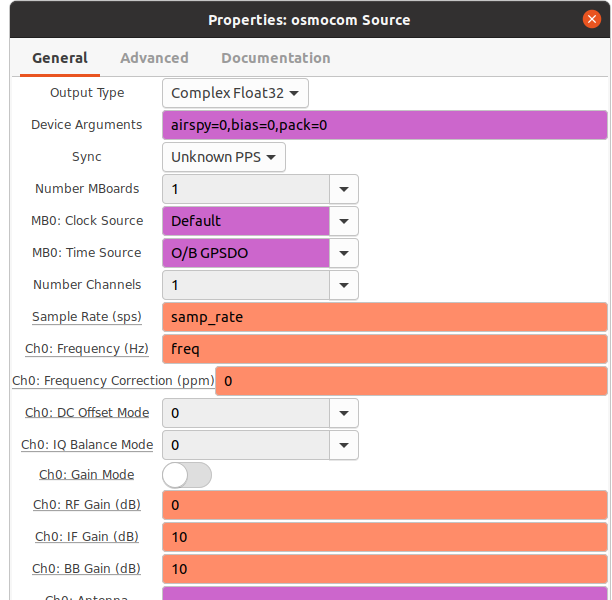 The first step in the signal processing chain is a “polyphase filter”. The polyphase filter (PFB) is a DSP technique that aims to mitigate the drawbacks of simple DFT. The PFB produces a flat response throughout the channel and provides excellent suppression of out-of-band signals. This filter is made by splitting the stream of samples into four vectors, each of these is multiplied by a suitable constant and then added to the others to produce a single vector on which our FFT will then be applied. For details on this technique, refer to the DSPiRA website.

Downstream of the “polyphase filter” the vector with the data is sent to the main blocks which execute respectively :

After the time integration operations, the vector with the spectrum values ​​is sent to the custom systemp_calibration block which performs the calibration operations. For details on the calibration of the radio telescope, refer to the next paragraph. The outputs of this block are the three vectors of the spectrum, gain and system temperature which are sent to three respective QT GUI Vector Sinks for on-screen display. The spectrum vector is also sent to a block that writes to a file in csv format. 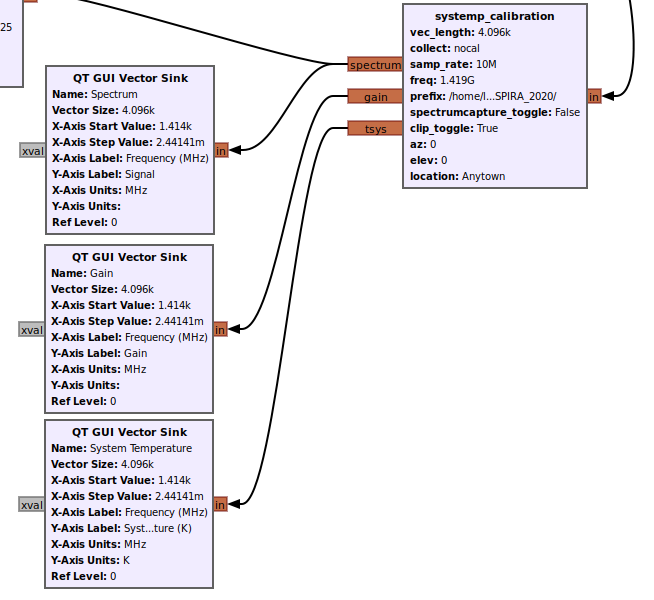 The following image shows the screenshot of the running program in which you can see, in the window with the spectrum graph, our peak corresponding to the emission at 21 cm ! 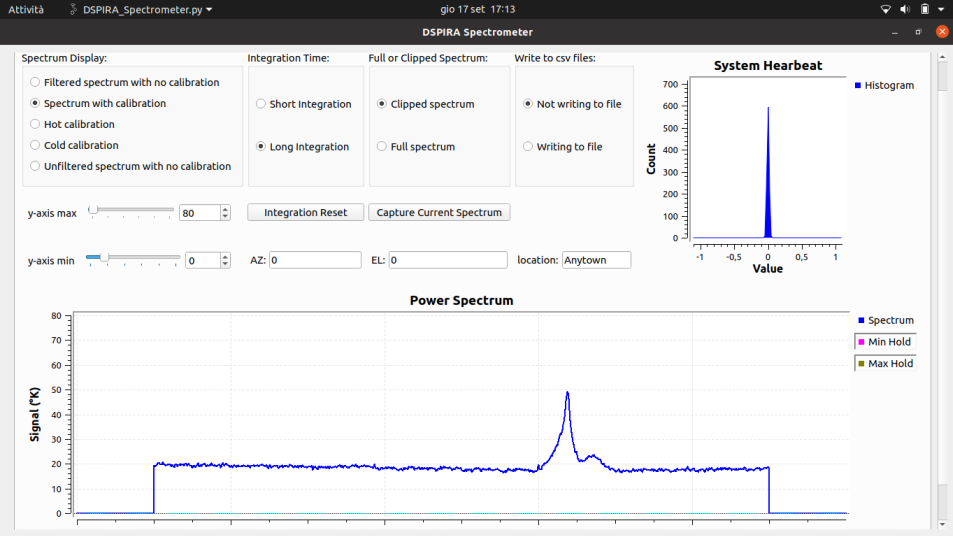 The minimum intensity of radiation that can be collected by a radio telescope antenna depends on the noise associated with the receiving system. In addition to the useful signal, unwanted components of various nature and origin, such as noise and disturbances, are generally measured. Total noise is divided into two fundamental contributions: antenna noise and equipment noise. The useful radio astronomy signal is also constituted by noise with a Gaussian distribution, this allows all the contributions (signal + noise) to be summed in power in order to obtain an overall value called average power of equivalent noise :

Which leads to an equivalent antenna temperature :

To use our radio telescope efficiently and to obtain accurate measurements, however, we need to separate the contributions of the signal from those of the noise: this is done with the calibration procedure. If we assume that the behavior of the system is linear then it is sufficient to measure on two points, with known temperatures and sufficiently distant from each other. The measurement is usually carried out on a cold point, for example by pointing the antenna to the zenith, in the absence of radio sources, where the brightness temperature has a value of 10°K; and pointing the antenna towards a hot point, for example the ground, for which a brightness temperature of about 300°K is assumed.
In detail we can write :

Moreover the parameters G, Tobject e Tsystem depends on the frequency. As we explained above, calibration consists in measuring and acquiring the power spectrum for two known temperatures :

With these data we can calculate the parameters of our telescope G and Tsystem . From relation [1] we can obtain the following relations :

Knowing these parameters we can easily obtain the data that interests us : Tobject

The graphs below show the spectra obtained by pointing the antenna towards an area of ​​the Milky Way. In red the uncalibrated spectrum, in blue the same spectrum, however, calibrated with the previously obtained G and Tsys parameters : as you can see, the calibrated spectrum makes the radio emissions of the galaxy much more evident and accurate.

After calibration we can finally use our radio telescope to detect the emissions at 21cm of the hydrogen clouds present in our galaxy. The GNURadio spectrometer_w_cal program allows the use of two signal integration time constants: 0.1s and 10s. For a quick view of the signal, for example while we are pointing the antenna, it may be useful to use the fast integration in order to immediately see the signal trend; for the acquisition of the spectrum (and for the calibration) it is advisable to use the long integration in order to have a cleaner signal, as you can see in the graph below where we compare, in blue the integration at 0.1s and in red the signal which is obtained with the integration at 10s.

Now our radio telescope for detecting the emission at 21cm is ready : we will use it for the study of the structure of our galaxy and for the analysis of its rotation speed.