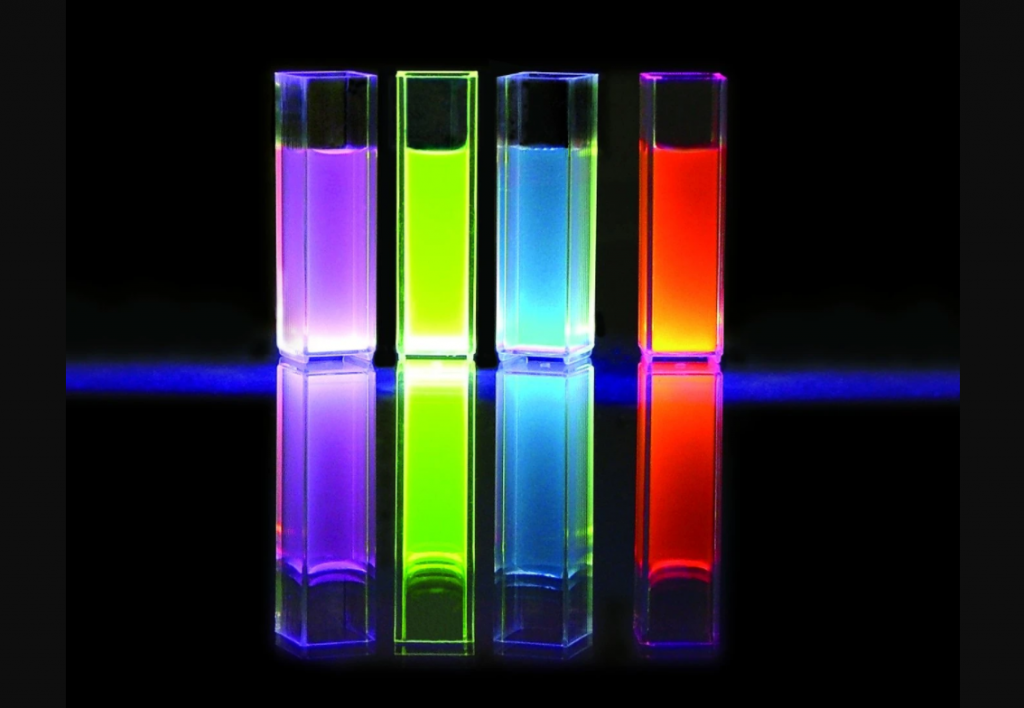 Abstract : In this post we want to exploit the “freshly built” nitrogen laser (DIY Nitrogen TEA Laser) as a source of excitation for a dye laser. The dye laser is super-radiant and therefore can operate, under the right conditions, even without a resonant cavity. By focusing on the cuvette containing the solution with the active dye, the UV laser pulse produced by our TEA laser creates the conditions for having a laser action by the dye molecule.

A dye laser is a laser that uses an organic dye as the lasing medium, usually as a liquid solution. Compared to gases and most solid state lasing media, a dye can usually be used for a much wider range of wavelengths, often spanning 50 to 100 nanometers or more. The wide bandwidth makes them particularly suitable for tunable lasers and pulsed lasers. The dye rhodamine 6G, for example, can be tuned from 635 nm (orangish-red) to 560 nm (greenish-yellow), and produce pulses as short as 16 femtoseconds.
A dye laser uses a gain medium consisting of an organic dye, which is a carbon-based, soluble stain that is often fluorescent, such as the dye in a highlighter pen. The dye is mixed with a compatible solvent, allowing the molecules to diffuse evenly throughout the liquid.
A high energy source of light is needed to ‘pump’ the liquid beyond its lasing threshold. A fast discharge flashtube or an external laser is usually used for this purpose. 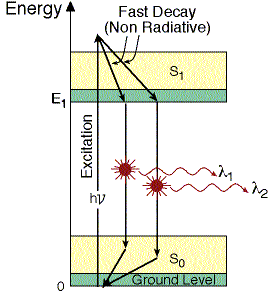 The dyes used in these lasers contain rather large, organic molecules which fluoresce. Most dyes have a very short time between the absorption and emission of light, referred to as the fluorescence lifetime, which is often on the order of a few nanoseconds. In comparison, most solid-state lasers have a fluorescence lifetime ranging from hundreds of microseconds to a few milliseconds. Under standard laser-pumping conditions, the molecules emit their energy before a population inversion can properly build up, so dyes require rather specialized means of pumping. Liquid dyes have an extremely high lasing threshold. To deliver the large amounts of energy necessary to bring the dye into lasing condition an external pulsed nitrogen laser can be conveniently used.
The diagram on the left shows the energy level scheme for a dye laser (it is a four level type).
the molecules that can be used are varied, but we focus on the following : coumarin, rhodamine 6G and fluorescein.

Coumarin is an aromatic compound. At room temperature it comes in the form of colorless crystals, with a characteristic odor. Isolated for the first time from Dipteryx odorata, whose popular name was coumarin, coumarin is present in more than 27 plant families, and is responsible for the sweet smell of freshly cut grass. It is the progenitor of a class of derivative compounds – called coumarins – which share the benzopyranic structure of coumarin. Coumarin is also used as a gain medium in some dye lasers. It absorbs at wavelengths below 400 nm and has strong fluorescence at 460 nm.

As active medium in the dye laser we used a solvent composed of isopropyl alcohol, with a coumarin concentration of about 1g/l.

The images below show the fluorescence and the emission spectrum of a coumarin solution excited by a laser at 400 nm. 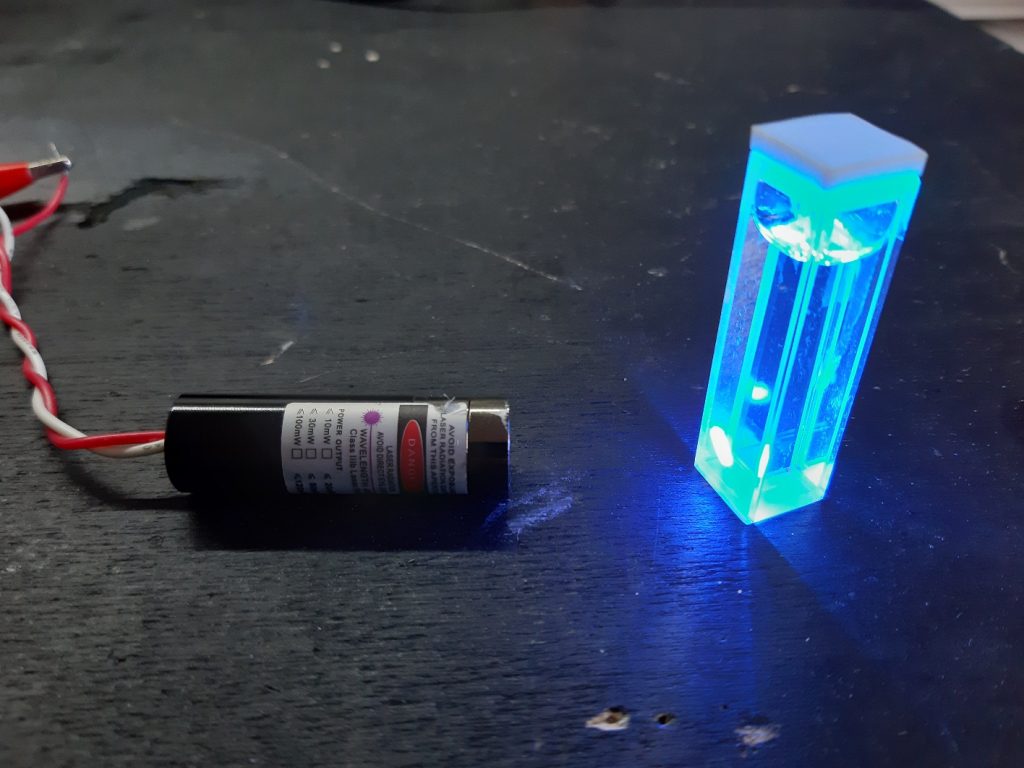 Rhodamine 6G is a highly fluorescent compound belonging to the rhodamine family. Rhodamine fluoresces and therefore can be easily detected with instruments called fluorimeters. Rhodamine is widely used in biology, histology and microscopy as an indicator and dye. Rhodamine 6G is also used as a laser dye, or gain medium, in dye lasers, and is pumped by the second harmonic (532 nm) of the emission of the Nd: YAG laser or nitrogen laser. The dye has remarkable photostability, high fluorescence quantum efficiency (0.95), low cost, and its laser emission is close to its absorbance peak (approximately 530 nm). The laser emission range of this dye goes from 555 nm to 585 nm with a maximum at 566 nm.

As an active medium in the dye laser we used a solvent composed of methyl alcohol, with a concentration of rhodamine of about 1 g/l.

In the images below you can see the fluorescence and the emission spectrum of a rhodamine solution excited by a laser at 400 nm. 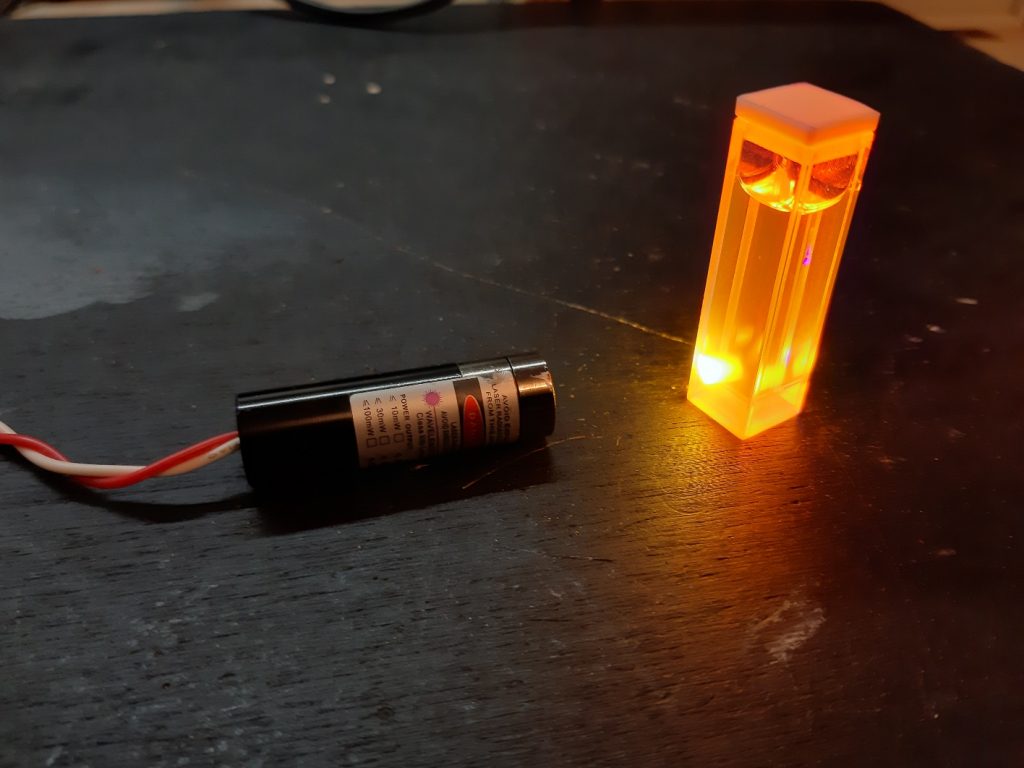 Fluorescein is one of the most widely used fluorescent molecules. At room temperature it appears as an odorless red-brown solid, which emits an intense fluorescence in the 520-530 nm range (yellow-green, very characteristic) when excited by ultraviolet rays and in the blue range (465-490 nm ).

As active medium in the dye laser we used a solvent consisting of 60% ethyl alcohol and 40% water (deionized), with a fluorescein concentration of about 0.5 g/l.

In the images below you can see the fluorescence and the emission spectrum of a fluorescein solution excited by a laser at 400 nm. 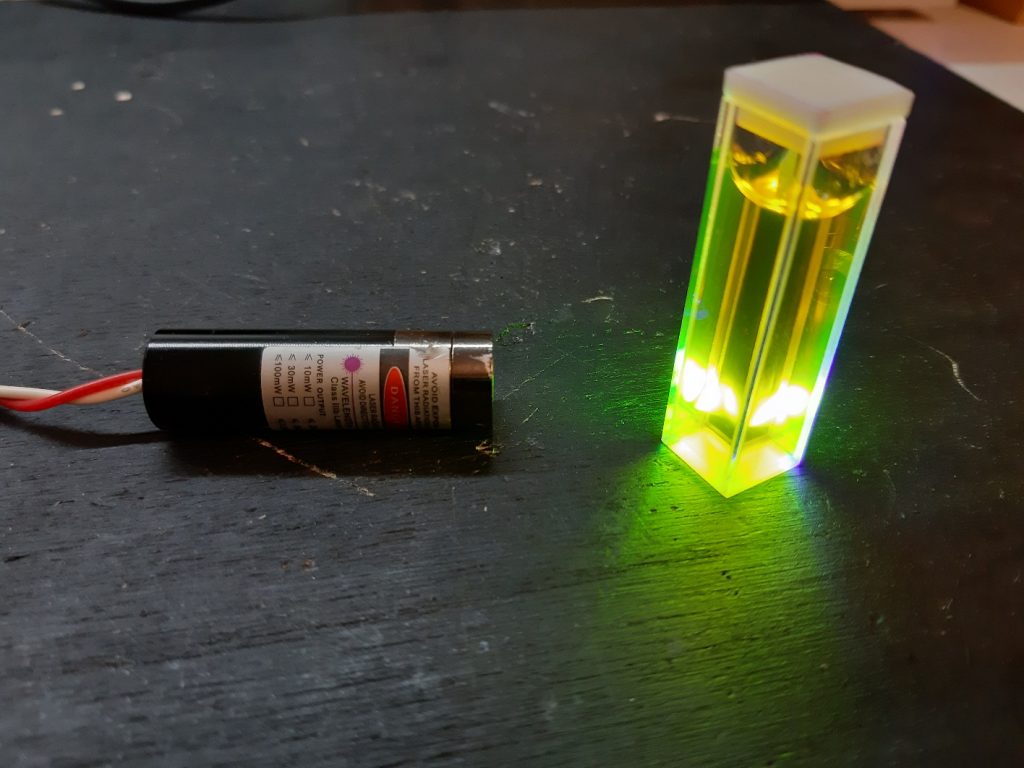 The dye laser setup is quite simple. A cylindrical lens is used which aims to focus the UV beam generated by the TEA laser. With a cylindrical lens, focusing does not occur on a point but on a line, the linear conformation of the focusing spot enables the super-radiant laser action of the active medium. The solution with the dye is contained in a rectangular shaped quartz cuvette, the quartz is necessary because it is transparent to UV wavelengths. Nitrogen laser, cylindrical lens and cuvette should be aligned as shown in the image below. The laser action produces a beam orthogonal to the pumping beam. 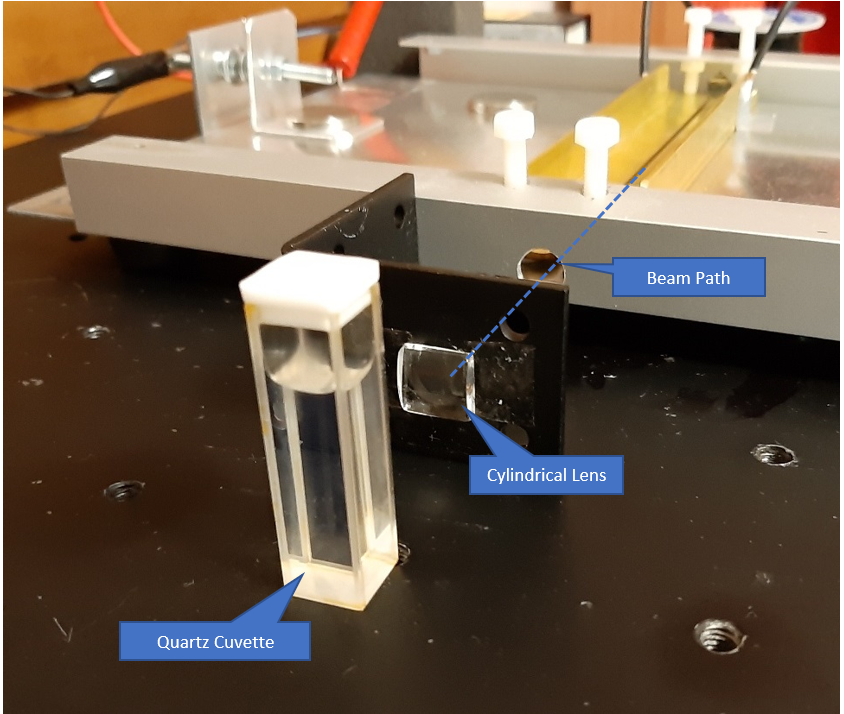 The image below shows, on a paper screen, the pumping UV beam focused by the cylindrical lens. 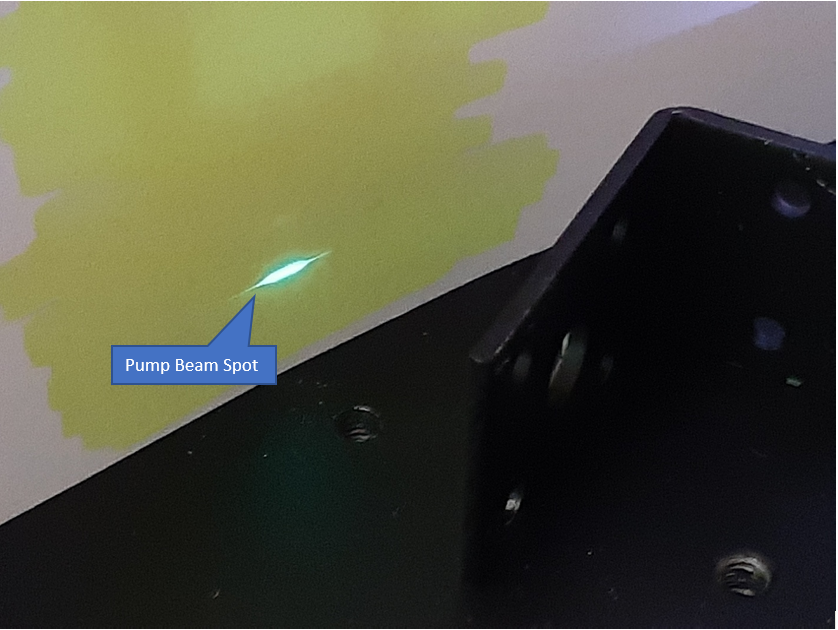 The image below shows the laser action produced by the coumarin dye. The pumping beam is focused on the front face of the cuvette. The beam produced by the dye laser is produced orthogonally, producing the spot visible on the paper screen on the right. 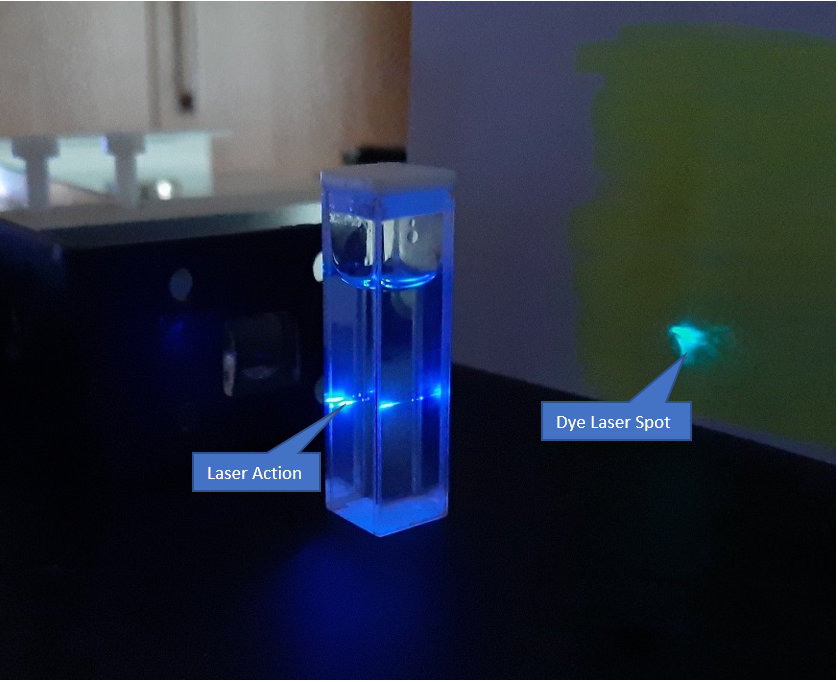 The image below shows the laser action produced by the fluorescein dye. The pumping beam is focused on the front face of the cuvette. The beam produced by the dye laser is produced orthogonally. 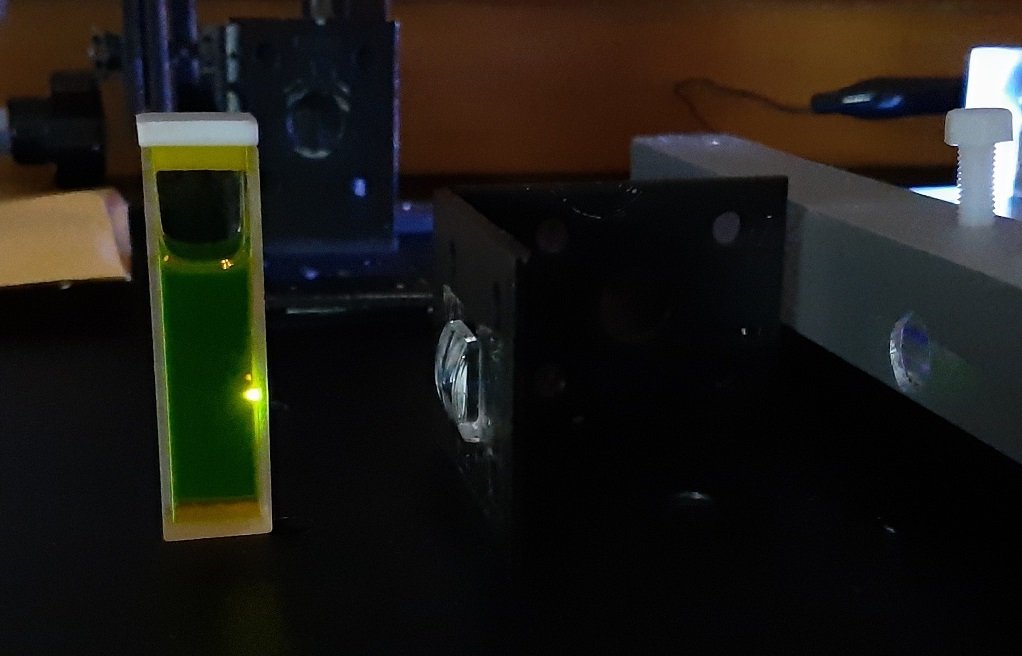 The availability of the TEA DIY nitrogen laser allows you to experiment with dye lasers. The construction is quite simple, however it is necessary to use a cylindrical lens and a quartz cuvette (eBay made in China). Dyes (fluorescein, coumarin, …) can be found quite easily online at affordable prices, as well as solvents. However, it is necessary to pay attention to the handling of these substances due to their toxicity and/or danger (volatile and flammable). 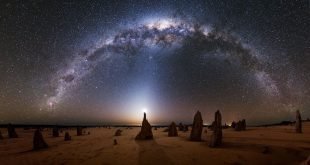 PDF Abstract : In this post we want to describe the study activity of the structure …