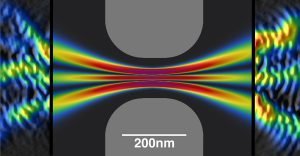 Abstract : the quantum effects on physical processes become evident only when the dimensional scale of the process we are studying becomes comparable to the De Broglie wavelength λ = h/m*v where m and v are the mass and speed of the material particle. This dimensional quantity marks the “border” between classical mechanics and quantum mechanics. This is also the reason that explains the reason that makes quantum effects detectable and measurable only in the microscopic – or nanoscopic – world, while in the ordinary macroscopic world these effects are completely canceled. This makes it difficult to observe these phenomena, however there are cases in which even in “normal” situations quantum effects can be observed and quantized conduction is one of them. In this post we describe an apparatus that allows us to qualitatively detect and measure the quantized conduction that occurs in the detachment phase in the contacts of a normal relay.

Relatively recent experiments (1988) have allowed to experimentally observe the phenomenon of quantization of conductance which occurs in a one-dimensional conductor in which the transport takes place in a so-called “ballistic” mode. This phenomenon occurs when the conductor has very small transverse dimensions, of the order of nanometers, in these conditions the movement of electrons can take place without “scattering” and is governed by the laws of quantum mechanics.
Under these conditions, it is observed that the conductance is quantized in units of G0 = 2e2/h, where e is the electron charge and h is the Planck constant. The value of this “quantum” of conductance is 77.48 μS, corresponding to a resistance of approximately 12.9 KΩ.

As you can imagine, obtaining one-dimensional conductors is not easy. In recent years, lithographic techniques of microelectronics and the new science of nanomaterials have made it possible to build nanowires and quantum points contacts that show the behavior described. Outside the laboratories, however, it is difficult to have access to this technology, however, with a little creativity, standard equipment can be use to recreate physical situations in which conduction phenomena can occur in mesoscopic structures if not in real nanowires.

A bit of Theory …

The classical model of electrical conduction is simple yet it works very well in all the normal situations. When a potential difference V is applied across a wire, it produces an electric field E and a force F acting on the electrons in a direction opposite the field. Thus, an electron will accelerate between collisions according to F = m*a = -e*E and its speed after time t from being scattered is given by v1 = v0 + e*E*t/m, where v0 is the electron speed immediately after being scattered. When averaged over the time between collisions, one obtains the drift velocity :

Where τ is the average time between collisions.
The electric current in a wire of cross-sectional area A is the total charge passing a given point each second. If n is the number density of free electrons in the metal, then the current is given by the following formulas : 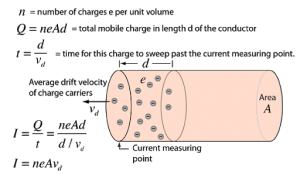 Substituting vd from Equation above leads to the usual form of Ohm’s law :

where J is the current density and σ = e2*n*τ/m is the conductivity, an intrinsic property of the material that does not depend on the geometry. The conductance G=I/V of a wire of length L is then given by G = σ*A/L. This model, as said above, works well and can be even improved replacing vd with vf (fermi velocity).

This model fails when the radius of the wire is reduced and gets down to the atomic scale, being comparable to the de Broglie wavelength of the electrons at the Fermi surface. At this point, a full quantum-mechanical treatment is necessary to understand the system behavior.
A wire with transverse dimensions of the order of the nanometer can be, in a first approximation, modeled as a potential hole of size L, where L corresponds to the length of the wire. Under these conditions we can solve Schrodinger’s equation and derive the electron wave function. The solution is shown in the figure below, which also indicates the quantized energy levels. 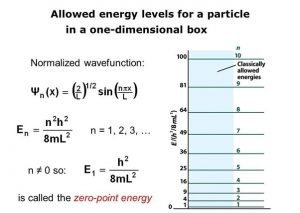 From the equation for the energy of level n we can obtain the inverse relation :

The above equation also gives us the number of states having energy less than E. Differentiating this last equation we obtain the density of the states dn/dE :

Knowing that E=mv2/2 and replacing in the previous equation we obtain :

And in particular dn/de =2L/hvf for the states corresponding to the fermi level.

At this point we can try to determine the current that circulates in this one-dimensional wire. At the ends of the wire are the contacts that provide a “reservoir” of charge carriers. A difference in potential V is applied to the ends of the wire. The consequent increase in energy, eV, allows us to determine the number of energy levels involved in the transport of the charges. The image below shows the situation of energy levels.

The number of carriers (per unit of length) that conduct the current is given by:

Knowing that the current I is calculated from I =Nevf replacing for N we obtain :

So we get a formula to determine the “quantum” of conductance :

In the real case, the nanowire can be modeled as a set n of one-dimensional wires, in parallel with each other, so the conductances add up :

Nanowires are not readily available for an amateur laboratory like PhysicsOpenLab is. However, a temporary “surrogate” of a nanowire can be obtained when a normal contact is opened, such as that of a relay. In fact, when the contact is opened, “bridges” can form, consisting of nanowires, between the two separating sheets, as shown in the following drawing. 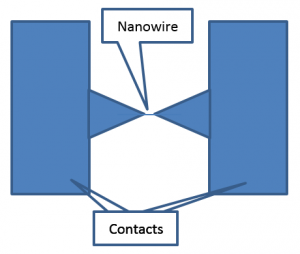 The relay is inserted in a circuit which has the purpose of measuring the current which passes through the relay contact. In practice, the relay contact is inserted in a circuit powered at very low voltage: 10 – 20 mV. This is accomplished simply with a voltage divider. The current flowing through the relay is sent to an amplifier which produces an output signal proportional to the current. The circuit is shown in the following diagram. The feedback resistance is 100 KΩ, the 5 pF feedback capacitor is used to eliminate unwanted oscillations. 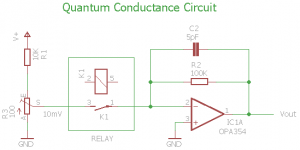 From the above scheme we can deduce that :

If the conductance has a step pattern, it follows that also the Vout must follow the same step pattern in the transition between +Vcc (closed contact) and 0 (open contact), with step width equal to:

The image below shows the experimental setup, with the voltage divider, the relay with the relay excitation button and the signal amplifier. 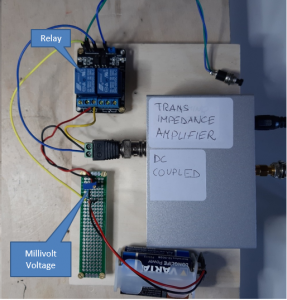 With a digital oscilloscope we have acquired a series of signals in which we can appreciate the stepwise trend of the Vout signal, as foreseen by the theory. The measurements were made for two values ​​of the Vin: 10 mV and 20 mV.
Although our experimental setup did not allow us to make precise quantitative measurements, the traces clearly show the discontinuous trend with values ​​of the steps compatible with the theory predictions. 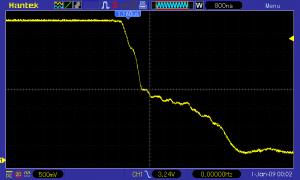 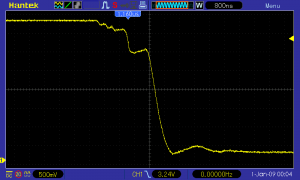 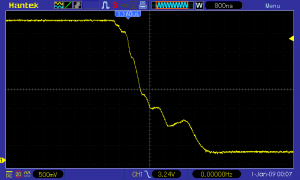 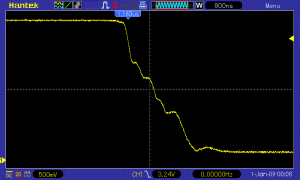 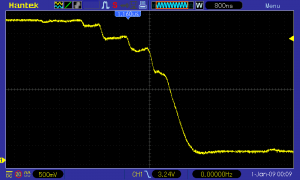 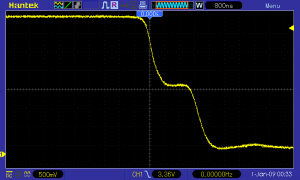 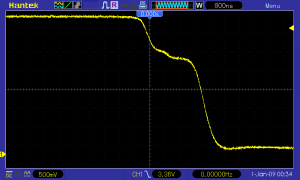 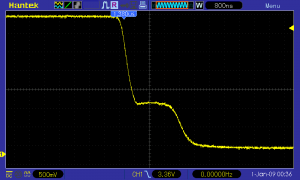