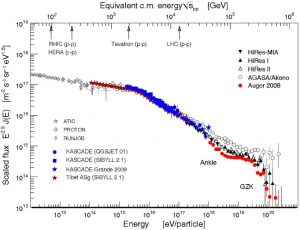 In our experimental physics website, cosmic rays are an “unmissable” appointment : this physical phenomenon always offers new possibilities for experimentation and always gives many satisfactions. Over time we have used different experimental detection techniques : geiger tubes, scintillation detectors coupled to both PMT and SiPM, Cherenkov detectors. We also studied the flux of cosmic muons at various altitudes, at different degrees of inclination with respect to the zenith, we highlighted the East-West effect and we made a precise measurement of the average life of the muon in its decay process.

A special feature of cosmic rays is their “incredible” energy. A primary cosmic ray is capable of generating several thousands of secondary particles, which, in turn, reach the ground with energies so high that they are able to go through lead screens with thickness of several tens of centimeters. The cover image of the post shows the energy spectrum of primary cosmic rays, measured with different experimental methods. You can see that were recorded events with energy  even up to 1020eV.
The origin of these very high energy cosmic rays is still partially unknown.

The in-depth study of the energy of cosmic rays is very interesting but it is beyond our reach. However, we can try to make estimates using the means at our disposal and making some simplifying hypotheses.

We only consider muons, the particle that we can detect with our instrumentation. We know that a particle, passing through matter, loses energy due to the interactions with the atoms of the material passed through. The interactions that can take place between the muon and the atoms of the material are complex, however, in a first approximation, we can only consider the collisions between the muon and the electrons of the atoms. The energy lost by the muon and transferred to the electrons causes the excitation or ionization of the atom. For the exact description of this physical process it is obviously necessary to use quantum mechanics, but we are interested in a simplified description.
If we consider that the interaction time is Δt, b is the distance between the electron and muon and V is the muon speed, we can write that the moment transferred to the electron is ΔP = F*Δt, while Δt = 2b/V. It therefore appears that the energy transferred to the electron – and therefore lost by the muon – is inversely proportional to the square of the muon speed :

In practice, the energy loss of the particle therefore decreases as the square of its speed increases, because, since the interaction time is shorter, the impulse provided is less. The exact solution to this problem is provided by Bethe – Block theory.

The graph below shows the trend of the energy loss of a particle passing through matter, by unit of length (dE/dx) – divided by the density of the material – as a function of the speed of the particle. You can see how the trend is similar for all materials : the value decreases up to a minimum and then goes back to the further increase in speed : this occurs for relativistic effects. In our case we can consider muons as relativistic particles and take the minimum value of the curve : 1.122 which, for the density of lead, is 13 MeV/cm. 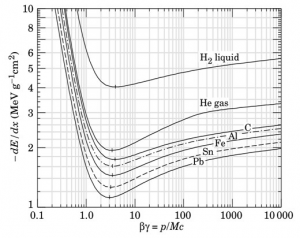 Our goal is to measure the energy of secondary muons that reach the ground. Muons are the secondary particles produced by a primary cosmic ray. If we can get an estimate of the energy and number of muons produced by a primary ray, then we can know the initial energy of the primary cosmic ray.
We assume that the energy distribution of muons (number of particles per energy interval ΔN/ΔE) has a constant trend up to a maximum energy Emax, above which the number of particles is zero. This hypothesis is not far from reality as can be seen from the graph below. The blue line super-imposed on the graph shows the distribution according to our simplifying hypothesis. Our goal is to estimate the value of Emax. 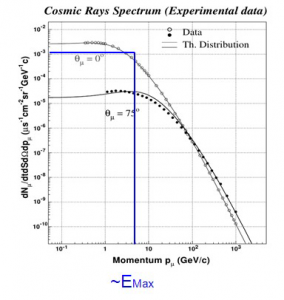 By exploiting the absorption of muons by lead shields of increasing thickness (high density element), we are able to have an estimate of Emax. If we consider the energy distribution of muons, we see that the area under the distribution curve corresponds to the total number of particles detected: N. If the detector is shielded by a lead thickness which causes an energy loss equal to ΔE it is clear that muons with energy lower than ΔE cannot be detected and therefore there will be a decrease in the number of counts equal to ΔN, which is the blue area in the figure below. From simple “geometric” considerations it is clear that :

Where ΔE is easily calculated by knowing the thickness of the lead shield and its energy absorption per unit of length which is worth 13 MeV/cm, N and ΔN are measured by the detector. 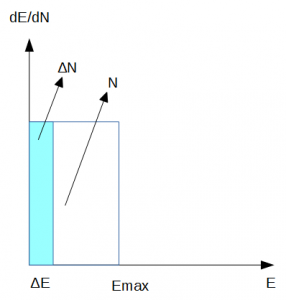 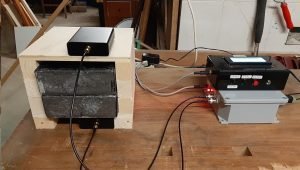 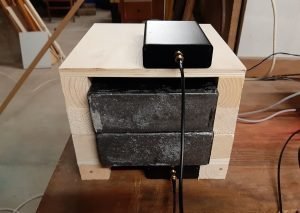 The initial measurement was made without lead screens, in order to measure the muon flux N (expressed in CPM). Then three measurements were made, corresponding to three increasing thicknesses : 1.2 cm, 5 cm and 11 cm. Each of the measures was carried out for a duration sufficient to collect a large number of counts, in order to reduce the statistical error. The data are as follows: 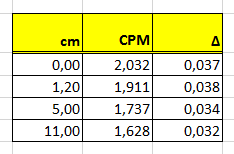 The collected data are inserted in a graph in order to obtain the regression line that expresses the link between the thickness of the lead screen and the variation in the number of counts. We exclude the initial data and calculate the line only with the subsequent three points : 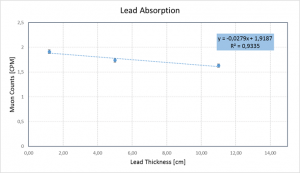 With these data we can therefore calculate the ratio ΔE/ΔN and the Emax value which expresses the maximum energy of the muons produced by the primary cosmic rays.

From the data we obtain for Emax a value of about 1GeV !

At this point we know the order of magnitude of the maximum energy of the muons. The next step is to estimate the number of secondary muons that originate from the same primary ray. 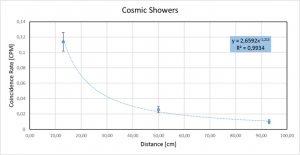 The surface of the shower will therefore be between 102 e 104 m2, while for the density of secondary particles we can give an average value of 10 particles/m2, this means that for a shower about 104 particles reach the ground. Considering then that the majority of secondary particles are absorbed by the atmosphere, we can give a percentage of 90%, it turns out that the number of particles generated by a primary ray is in the order of 105 particles and therefore the energy of the primary is equal to