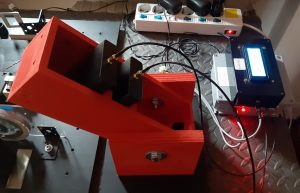 Cosmic rays have already been the subject of numerous posts. In PhysicsOpenLab we have built numerous detectors based on Geiger tubes, on PMT coupled with scintillators, on the Cerenkov effect and also on the use of solid state sensors such as SiPM. In this post we want to resume the topic to illustrate the construction of a cosmic ray telescope based on plastic scintillators and SiPM. The aim is to create an instrument sufficiently accurate to allow the measurement of the flux of cosmic rays according to the angle of inclination of the instrument and give evidence of the West – East effect.

The cosmic ray sensor is based on the SiPM device (Silicon Photomultiplier). It is a solid state photomultiplier. These components consist of an array of avalanche photodiodes, called pixels, operating in Geiger mode and connected in parallel on a common Silicon substrate. These components have been the subject of numerous projects carried out by PhysicsOpenLab: Silicon Photomultiplier (SiPM), SiPM Preamplifier, SiPM & Plastic Scintillator. The image below shows the sensitive part of the component that we used, a 4x4mm SiPM, photographed through the plastic scintillator. 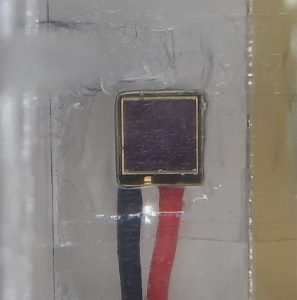 The SiPM is placed on one side of the plastic scintillator. To fix the component, simply use adhesive tape. To improve the optical coupling between the SiPM and the scintillator, it is advisable to use optical grease between the SiPM surface and the plastic block surface. Of course the side on which the SiPM is placed must be of optical quality. The image below shows the scintillator together with the SiPM.
Our block of plastic scintillator is made of BC412 material and has dimensions of 5.7×5.7 cm with a thickness of 1cm, the sensitive area is 32.5 cm2 . 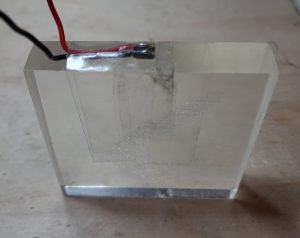 The scintillator must be wrapped with white Teflon tape in order to reflect and diffuse inside the light radiation produced by the interaction with the particles, in this way the efficiency of the detector is maximized. As an alternative to Teflon, aluminum foil can also be used. 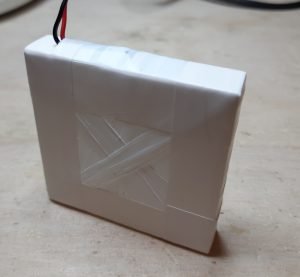 The Teflon-wrapped scintillator is in turn wrapped with dark adhesive tape to prevent ambient light from reaching the SiPM sensor. The scintillator is now placed in an appropriately sized aluminum box equipped with an SMA connector, as shown in the image below. 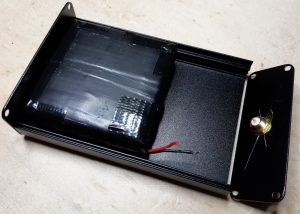 Two detectors were built and placed on an adjustable and inclinable support in order to realize what is known as a cosmic ray telescope. The two detectors are aligned, one above the other, and spaced 5 cm apart in the first setup and spaced 10 cm apart in the second setup, where the detector are more distant from each other. The two detectors work with the coincidence technique, ie the particles that pass through both detectors are detected and therefore give rise to an impulse on both detectors at the same time. From geometric considerations it turns out that the theoretical angle covered by our telescope is, in the first setup, about 100° which correspond to about 2.24 sr, while in the second setup, where detectors are more distant, the angle is 80° – 1.47 sr. The useful solid angle covered by our instrument, however, is certainly less since it depends on the efficiency of the detectors which is high for the particles that pass near the SiPM and instead is low for the particles that pass further away. 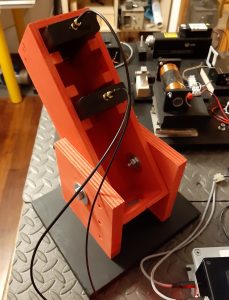 The signals that come from the SiPMs are acquired with a Trans-Impedance Amplifier. The image below shows the circuitry with the power section at the top and two TIA amplifiers for SiPM at the bottom. All inserted in a metal box to reduce electromagnetic disturbances. 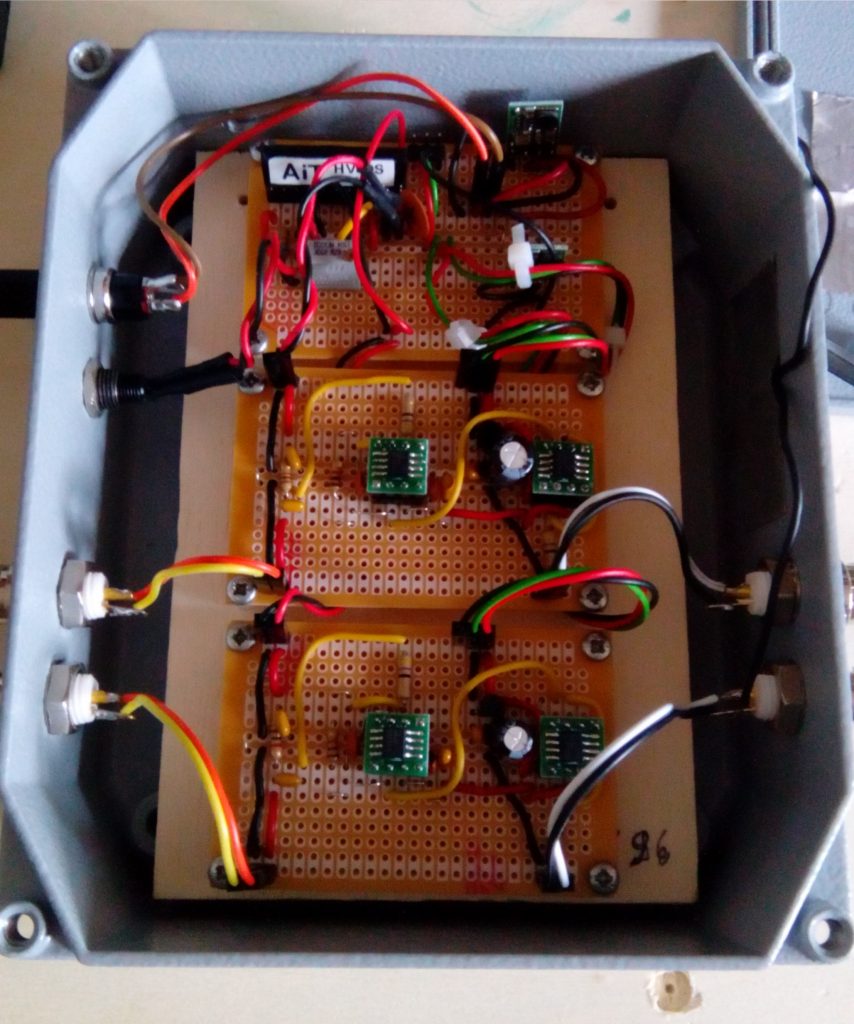 The TIA amplifier produces a positive pulse, amplified compared to the original pulse, lasting over 200ns. The oscilloscope trace shown below shows the original SiPM pulse in blue and the amplified pulse in yellow. The pulses produced by the two detectors, after amplification, are sent to a pulse counter. The used “pulse counter” is derived from the counter already presented in the PSoC based Pulse Counter. The original project has been modified to introduce a second input and to also count the coincidence pulses (technique already described in the post PSoC Coincidence Detector – I).
The main part of the counter is described in the diagram below : The two analog inputs convey the pulses to a couple of threshold comparators with hysteresis which produces a variable duration pulse at the outputs. The threshold is set with an external potentiometer, in our application the threshold has been set at 100mV (this value allows to exclude part of the pulses due to environmental radioactivity).
It is important that the duration of the input pulse is not less than the minimum detectable pulse (which is related to the clock frequency). In our case the impulse produced by the amplifier lasts over 200ns and this is sufficient to be detected with a processor running with a 50MHz clock.
The output circuit with D Flip-Flop and RC circuit is used to produce pulses with a constant duration of 1μsec, to be sent to the digital meters of the PSoC. 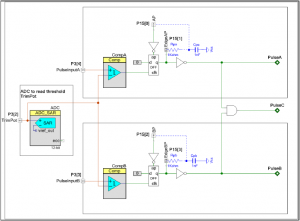 The images below show, as an example, the information shown on the display during counting : 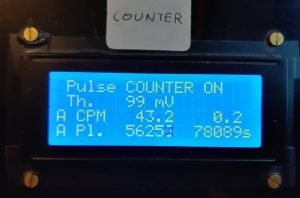 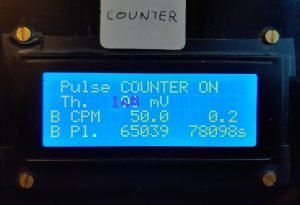 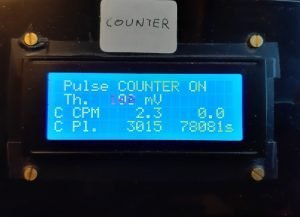 The data of the measured coincidences must also take into account the evaluation of random coincidences not due to the passage of a cosmic ray. We know that the duration of the impulse produced by our circuit is 1μsec, the counting rate of the two detectors, expressed in CPM, is approximately 45 CPM. The random coincidence rate therefore holds :

The measurements we made were mainly the evaluation of the flux of cosmic rays as a function of the inclination of the telescope and the attempt to measure the east – west effect.

The secondary cosmic rays that reach the ground (also arriving in our detector), as we know, are generated by the interaction of the primary rays with the nuclei of the atmosphere. This interaction occurs in the upper layers of the atmosphere, the secondary products of the interaction in turn interact with the gases and gradually lose energy until they are absorbed. If the primary energy exceeds a certain threshold, the secondary rays reach the ground and can be revealed. The number of rays that reach the detector therefore depends on the thickness of the atmosphere they had to go through : it therefore seems obvious that the maximum intensity is obtained by pointing the telescope towards the zenith and the flow is gradually decreasing increasing the inclination towards the vertical, up to to reach the minimum for horizontal orientation.
The figure below shows the different path of secondary muons through the atmosphere. 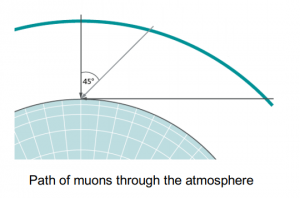 From geometric considerations the length of the path in the atmosphere varies according to a law proportional to the cos2 of inclination angle; we therefore expect that the flow of cosmic rays will also follow a similar pattern.
With our telescope we made the flow measurements at various angles of inclination and we obtained the graph shown below, in which the measurements are compared with the data calculated according to the law of cos2. As you can see, the agreement is more than good. 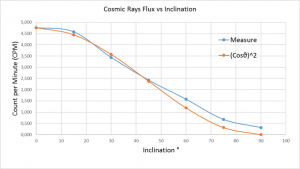 The east-west effect is the enhancement, especially at low geomagnetic latitudes, of primary cosmic rays incident on the atmosphere from the west as compared to those from the east. This is a consequence of the fact that the cosmic rays are postively charged nuclei which are bent systematically in one sense in the geomagnetic field. This interaction leads to some admitted and other “forbidden” trajectories with the net result of having more particles coming from the west than from the east.
The primary cosmic rays arrive near the earth in isotropic directions, having been “randomized” by the interstellar magnetic field. Actually, however, the cosmic rays of low energy from the east are reduced compared to those from the west. This happens because the geomagnetic field acts effectively “suppressing” certain trajectories which therefore turn out to be “prohibited”. See the image below. 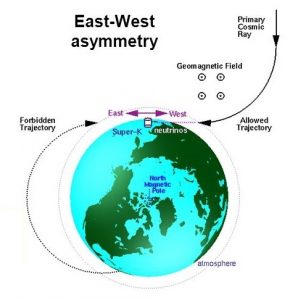 This “primary asymmetry” is also reflected in the intensity of the fluxes of secondary particles that are generated in the showers of the primary particles and have a direction correlated with the primary one.
By orienting our telescope in the East – West direction, and placing the detectors in the position of greatest distance, we also made a series of measurements in order to highlight this asymmetry. 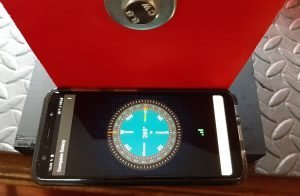 The measurement results are entered in the table below :

The values ​​obtained are interesting because they show a “surplus” of counts between the two directions equal to about 10%, a significant value, also taking into account the low value of the statistical error, obtained by prolonging the measurement for many hours.

The same measurements were also made by placing the detectors in the nearest position, which subtends a greater angle, which is about 100°. In this case we expect to get less different values, since the angular resolution is much lower.

As you can see from the data, the difference is less and in percentage is about 3.6%.

These results confirm that the East – West effect on the cosmic rays flux can be measured even in our latitudes, however taking care to prolong the measurement time a lot in order to collect a lot of data, thus reducing the statistical error, and so put in evidence even small counting differences.

The positioning of the two detectors can also be different from the “standard” one inside the telescope described above. The images below describe some configurations that allow to vary considerably the solid acceptance angle. 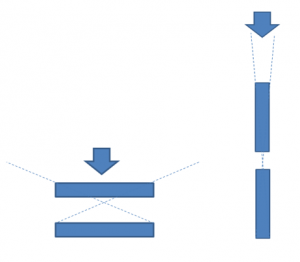 There is also the possibility of working with detectors side by side, at variable distance, in this case the coincidence events will signal the passage of secondary cosmic rays that originated from the same primary cosmic ray : the so-called “Air Shower”. The image below shows the configuration for detecting coincidences due to cosmic shower. 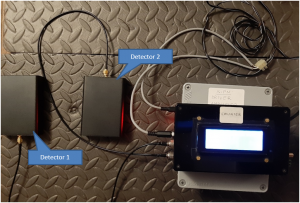 In a configuration similar to the one shown above, we measured 203 coincidence events in 79615 seconds, corresponding to a rate of 0.153 CPM, significantly higher than the rate due to simple random coincidences, which is 0.00405 CPM.

Previous il Sisma in Albania
Next Telescopio per Muoni 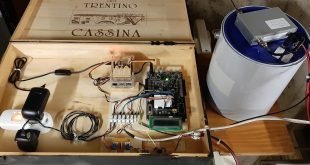