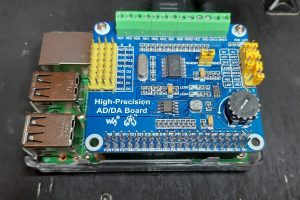 To acquire and subsequently process analog data from sensors, it is necessary to use an Analog – Digital converter : an ADC card. The possible solutions are manifold. For example, it is possible to use a PSoC chip that provides ADC components, acquire the data and subsequently transmit the data to a Raspberry Pi for subsequent processing, as we have described in the Raspberry Pi Logger (ENG) project. Alternatively you can use the excellent Theremino ADC24 module. In this post we want to describe a different solution based only on the use of the Raspberry.

The image below shows the board with the main components / functions :

The python code can be found at this link : AccelerPI. It must be taken into account that the operation of reading an analogue channel takes around 7 msec. So the sample rate cannot be faster than 100 Hz. In case of reading more than one channel the sample rate must be consequently slower.

The C code can be found at this link : wiringpi. The C code is much faster than the python code : the operation of reading the value from one channel takes around 1 msec, so the sample rate can be much faster.

Acquisition of Signals from an Accelerometer

As an example of application of the AD card we present the reading of the analog signals produced by a solid state accelerometer.

The LIS344ALH has a dynamically user selectable full-scale of ± 2 g / ± 6 g and it is capable of measuring accelerations over a maximum bandwidth of 1.8 kHz for all axes. The device bandwidth may be reduced by using external capacitances.

The images below show the component mounted on a breakout board equipped with leveling capacitors. 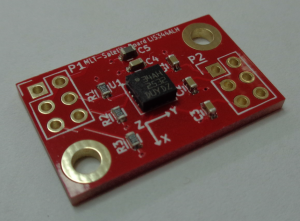 The sensor output signal is buffered by operational, as indicated in the diagram shown below. The signal is also translated on an intermediate level of 1.65V in order to exploit the entire 3.3V range made available by the ADC converter. 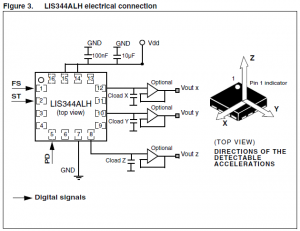 The image below shows the sensor and the board with the front end electronics for the pre-processing of the signals produced by the accelerometer. The yellow components are the polyester capacitors for the filtration of the continuous component. The following image shows the box with the three SMA outputs corresponding to the three channels X, Y and Z of the accelerometer. 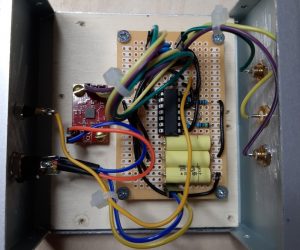 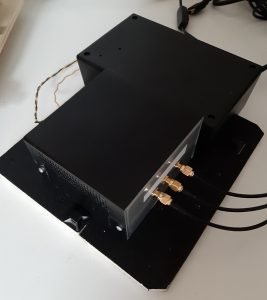 The signals acquired by the ADC card and subsequently processed by a python software can be viewed in a classic seismic trace such as those shown below. These are the recordings of the signals obtained from the three channels X, Y and Z. At the end of the track there is an oscillation caused artificially. 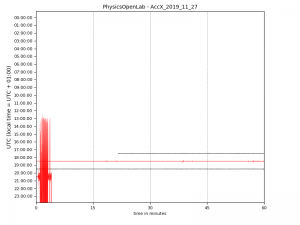 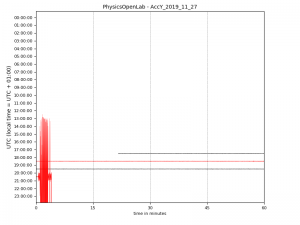 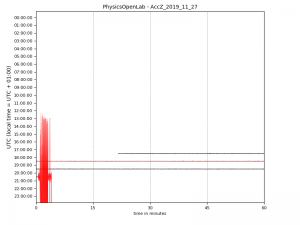