The diffraction and interference of electromagnetic radiation are easily observable phenomena that give direct and tangible evidence of the wave nature of light. Diffraction is the basis of many technologies, scientific techniques and common optical and electromagnetic phenomena. We will not deal with diffraction in detail, for which we refer to the numerous texts and the following previous Posts : Laser & Diffraction Grating, Light as a Wave : Slit Diffraction.

This principle helps us because the diffraction pattern produced by a set of slits of width w and spaced d is the same produced by a set of wires having a diameter w and spaced d. The theory of slit diffraction is well known.
The figure below shows the diffraction pattern obtained from n slits : the minima with greater spacing corresponds to the width w, while the minima with smaller spacing correspond to the distance d between the slits. The greater the number of slits, the better the definition of minima and maxima. 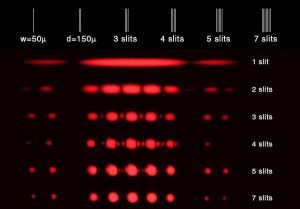 A front view of a spring is made up of two series of segments having a diameter equal to the diameter of the spring wire, spaced apart on a regular basis, with pitch P, and angled together with angle 2α. The diagram below shows these dimensional parameters of a spring. 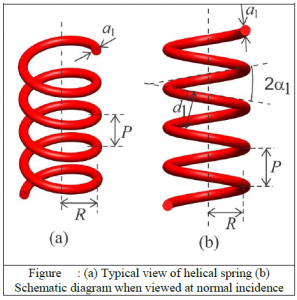 Of course we know that the DNA molecule consists of a double helix. A double helix seen from the front consists of four series of segments, as shown in the following image. 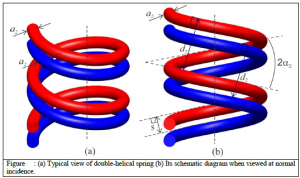 In the image below (from Tatiana Latychevskaia e Hans-Werner Fink, Physics Department of the University of Zurich, ,Three-dimensional double helical DNA structure directly revealed from its X-ray fiber diffraction pattern by iterative phase retrieval) we show the links between the diffraction pattern produced by the DNA molecule and the dimensional parameters of the double helix. 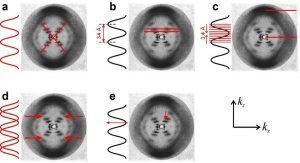 The experiment simply consists in carrying out a diffraction test of a laser beam by a spring that serves as a model of the DNA helix. For this purpose we used a He-Ne laser that emits on λ = 632.8 nm, the laser beam is enlarged with a beam-expander so as to obtain a beam with a section of about 1 cm. The spring is positioned in front of the laser beam and the diffraction pattern that is obtained is observed at a distance of 5 – 10 m .

The image below shows the laser and the spring used.

The following image shows an enlarged photograph of the spring used, on which the dimensional parameters are highlighted: the pitch P, the diameter d of the wire and the angle θ.
As already stated in the previous paragraph, seen from the front with respect to the laser beam, the helix appears as two series of “arms”, all parallel, with diameter d and a spacing of a pitch P, these two series of parallel arms have an angle with respect to the normal to the helix axis of a value equal to θ. 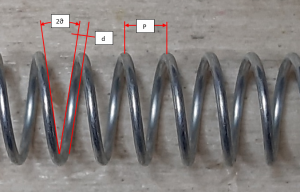 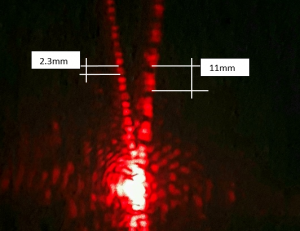 The diffraction lines then have different minimum and maximum due to the mutual interference of the laser beam waves diffracted by the spring arms. From the theory of diffraction, knowing the spacing, the minor and the major, we know how to calculate the linear dimensions of the obstacles that caused the diffraction.

From trivial geometric considerations we can derive the diameter of the spring wire and the pitch, which correspond quite well to the measurements made with the caliper :
d = d1 = 0.47 mm
P = d2 / cosθ = 2.3 mm

The experiment of diffraction of a laser beam by a spring proved to be a valid didactic aid for the description of Rosalind Franklin’s historical experiments on X-ray diffraction by DNA molecules that made it possible to understand the structure in detail of DNA molecule.
While replicating the X-ray diffraction on DNA molecules is out of the reach of many laboratories, the use of this simplified model (spring + laser) allows us to explore the diffraction technique and to obtain the dimensional parameters of the helix with a rather good approximation.