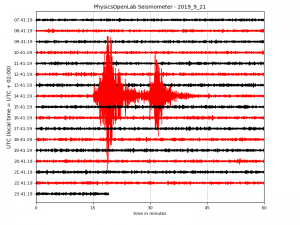 In this post we describe the seismic monitoring activity carried out with the PhysicsOpenLab seismometer. The tool has been described in the posts : Horizontal Pendulum Seismometer, Seismometer : Read-out Electronics.

The geographic position of our seismic station has the following data :

The graphs below show the seismic activity recorded yesterday and, real-time, today (it may be necessary to update the web page). The graphs are realized with the plot functionality of the obspy package. Each horizontal line corresponds to a recording hour, a full day is therefore made up of 24 recording lines. The spacing between the lines is constant and corresponds to a signal amplitude of 50 mV. The background undulations (microsisms, human activities, disturbances) have a width of about 5 mV, this is the lower limit for a seismic signal that can be recorded by the instrument. 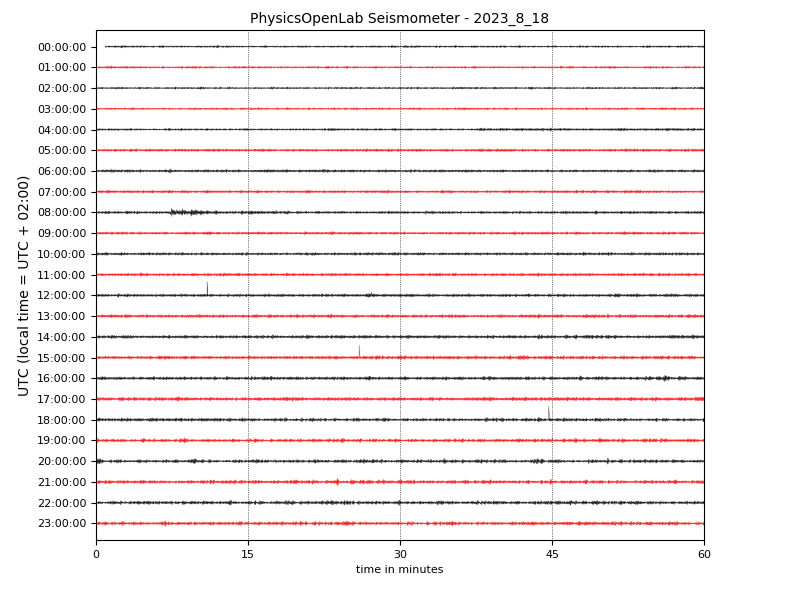 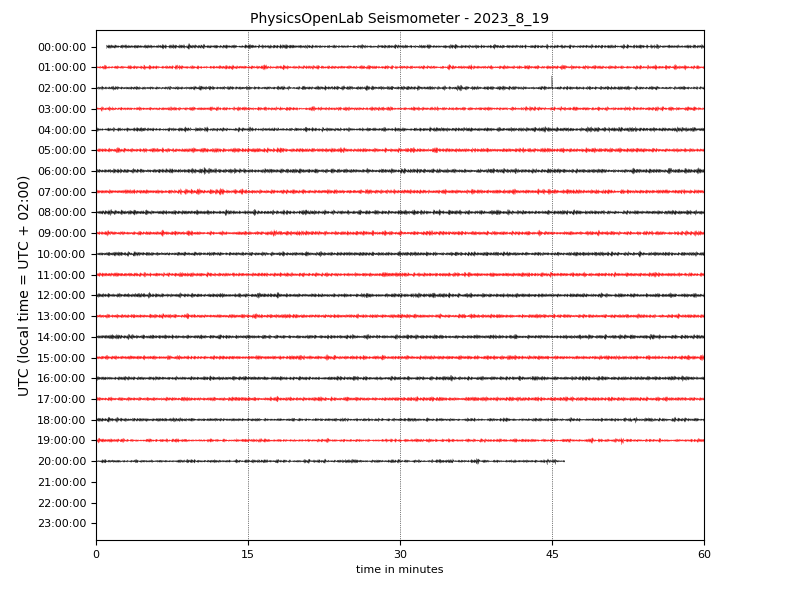 The natural seismic waves are divided mainly into two broad categories, depending on how they travel through the perturbed material :

P Waves are compression waves, also called longitudinal waves or primary waves. These are similar to acoustic waves and correspond to compressions and rarefactions of the medium in which they travel; when they pass, the particles of the material crossed make an oscillatory motion in the direction of wave propagation. They are the fastest among the waves generated by an earthquake and, therefore, the first that are felt by a seismic station, hence the name of Onda P (Primary).

S Waves are transverse waves that cause oscillations perpendicular to their propagation direction in the material crossed. They are similar to the waves that propagate along a rope of finite length, which is made to oscillate by moving the two ends.
An important feature of these waves is that they cannot propagate in fluid media, in which the modulus of rigidity is zero. It is therefore not possible to find them in the magma present in the magmatic reservoir of a volcano or in the outer core of the earth. This feature has historically been very important for geophysical studies concerning the composition of the earth.
We see that the speed of the Waves S is necessarily lower than the speed of the Waves P; they reach speeds that are usually around 60-70% of the speed of the P waves. This is the reason why they are always detected after the P waves (hence the name S waves as secondary).

Surface waves are created due to the intersection of body waves with a surface of physical discontinuity, the most studied of which is the free surface of the earth, ie the surface of separation between the earth’s crust and Earth’s atmosphere. These waves propagate guided along the surface and their energy exponentially decays with depth (this is why they are called superficial). These waves are easily induced in situations where the seismic source is shallow.
It should be emphasized that in the event of an earthquake, in the seismic hypocenter only P Waves and S Waves are generated directly, as these are the body waves that propagate inside the Earth, through its layers, but are not directly generated surface waves.
The speed of surface waves is less than the speed of body waves, so (especially if the event is distant) their arrival is after the arrival of the P and S Waves. On the other hand, the amplitude and therefore the associated energy of these waves is considerably greater than that of body waves, this happens because, as the distance increases, the energy is dissipated more slowly than in volume waves.

It is a remote earthquake that occurred on 09/21/2019 near the Albanian coast. These were two major shocks, respectively of magnitude 5.8 and 5.1. The images below show the earthquake data, the seismic traces, the spectrogram and the location of the earthquake with the method of the difference arrival time between P waves and S waves. The result is obtained in degrees, the distance in kilometers can be calculated from the formula :
D = (2π x Rloc / 360) x α where Rloc = 6367 Km

It is a remote earthquake that occurred on 09/26/2019 near the Turkish coast. It was a shock of magnitude 5.8. The images below show the earthquake data, seismic traces and the location of the earthquake with the method of the time difference between the instant of arrival of P waves and that of S waves.

It is a remote earthquake that occurred on 09/29/2019 near the Pacific coast of Chile. It was a shock of magnitude 6.6, therefore quite intense. The images below show the earthquake data, the seismic traces and the spectrogram. In the trace we note the absence of both direct P waves and direct S waves. The position of the detection point (our seismometer), compared to the earthquake hypocenter, is in fact located within the shadow-zone, in which S waves cannot arrive because they are stopped by the fluid nucleus that does not transmit the transverse waves, nor the P waves that are diffracted by the external nucleus. Only indirect waves and surface waves arrive in this area.

It is a local earthquake that occurred on 09/22/2019 in northern Friuli. It was a shock of magnitude 3.8. The images below show the earthquake data, seismic traces and the location of the earthquake with the method of the time difference between the instant of arrival of P waves and that of S waves. The arrival of the P waves and the S waves and the different frequency of the same are well noted, greater in the P waves and lesser in the S waves. The seismic trace has been improved by setting a bandwidth from 1 Hz to 5 Hz, thus filtering the low frequencies that make up the background noise. It is also noted that the response of the seismometer to these relatively high frequencies is rather reduced : our instrument in fact, it is much better suited to detecting remote earthquakes rather than local earthquakes.

It is a local earthquake that occurred on 23/09/2019 near the city of Treviso, 60 Km far from our seismic station. It was a shock of magnitude 2.8. The images below show the earthquake data and seismic trace. As in the previous case the seismic trace has been greatly improved by setting a bandwidth from 1 Hz to 5 Hz, thus filtering the low frequencies that make up the background noise. 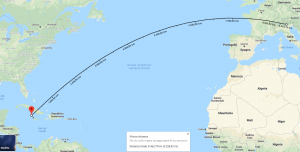 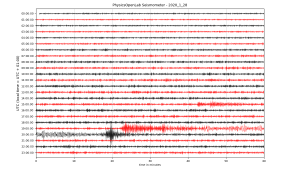 It is a remote earthquake that occurred on 23-06-2020 in Mexico. It was a shock of magnitude 7.6, therefore very intense. The images below show the earthquake data and the seismic traces. In the track, the long “tail” of the surface waves (Love waves) has gone on for more than 60 minutes. 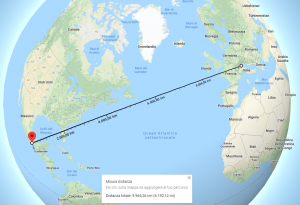 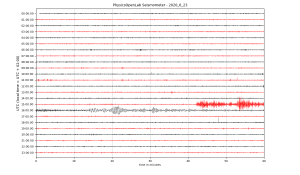 The following image shows the trace of the earthquake in which the arrival moments of the P waves, the S waves and the surface waves Lq (Love waves) are indicated. The mathematical model of seismic wave propagation provides us with results that match well with the seismometer records. For the speed of the surface waves we have used a value of 3.71 Km/s.

A characteristic of surface waves is that they present the phenomenon of dispersion, this means that different frequencies propagate at different speeds : the lower frequencies have higher speeds and vice versa the higher frequencies propagate at a lower speed. The phenomenon of dispersion causes a deformation of the “signal” due to mutual interference with the formation of “packets” of waves traveling at different speeds, as can be seen in the above trace in which three “packets” are highlighted.
For each of the three wave trains we can calculate the phase speed by measuring the time and counting the number of waves:

We can see how the lower frequencies are the waves that arrived earlier, that is, having the highest speed.