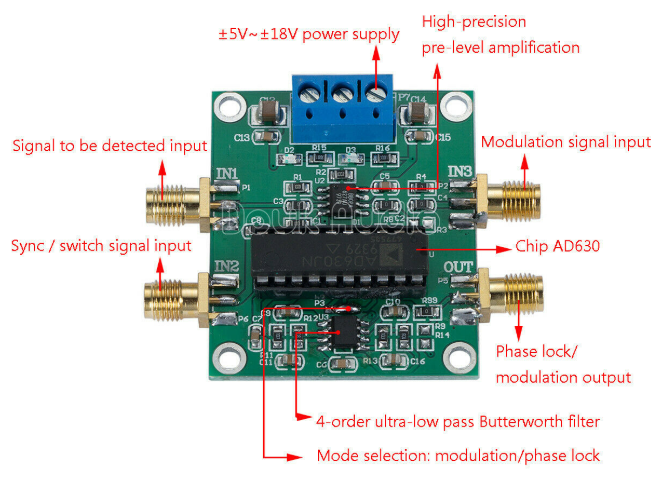 A lock-in amplifier (also known as a phase-sensitive detector) is a type of amplifier that can extract a signal with a known carrier from an extremely noisy environment. It is basically an analog multiplier followed by a low pass filter. Practically a lock-in amplifier convert the high frequency signal into a DC component or at a very low frequency.

Lock-in amplifiers are widely used to measure noise-covered signals. To achieve this it is necessary to use a very narrow band filter that removes unwanted noise and lets the signal to be measured pass. The frequency of the signal being measured and therefore also the pass-band filter is established by the reference signal, which must obviously be at the same frequency as the modulation of the signal to be measured.

The image below shows the principle scheme of the lock-in amplifier: signal A is modulated at frequency f = ωt and is mixed via an analog multiplier with a reference that has the same frequency. Passing the multiplier output through a low-pass filter eliminates the high-frequency component and thus remains an output proportional to the initial signal A, filtered by the noise.

The 2ω frequency component is filtered by the low pass filter. The output y(t) will therefore be given by:

The output of the lock-in amplifier is therefore a continuous signal proportional to the amplitude of the input signal, filtered by the noise. It is important that the phase difference between signal and reference is zero or at least constant over time.

The essential idea in signal reconstruction is that electrical noise is distributed over a wide spectrum, much wider than that of the signal to be measured. In the simple case of a white noise, even if the effective value of the noise is 106 times larger than the signal to be reconstructed, if the band of the measuring instrument can be reduced by a factor greater than 106 around the signal frequency, the reconstruction can be carried out. For example, in a 100 MHz band system (a typical oscilloscope), a filter with a 100 Hz band is sufficient.
In practice, even if the signal and the noise are indistinguishable in the time domain, if the signal has a well defined frequency and there are no noise peaks around this band, the noise and signal can be separated quite efficiently in the domain of the frequency.
The realization of the multiplier can be simplified by adopting the basic scheme shown below:

In this scheme the reference signal is actually a square wave with zero mean value, with the same frequency and phase of the signal. The square wave drives a switch that routes the signal to a normal buffer on the positive half-wave and to an inverting buffer on the negative half-wave. The buffer outputs are then added together. The square wave can easily obtained from the modulating carrier through a comparator circuit (for example a Schimtt trigger). This is equivalent of analogical multiplication but it is easier to realize.

The lock-in amplifier we used is shown in the cover image. It is a “made in china” amplifier that is easily found online at low prices. It is based on the AD630 chip, which is the heart of the device. The other contour components are a preamplifier for the input signal and the butterworth low-pass filter of the fourth order.

The image below shows the block diagram of the AD630 chip, where you can see the two channels A and B (for the signal and for the reference), the comparator with the analog switch and the output buffer that provides the sum of the two signals. The AD630 chip realizes the simplified scheme described above. 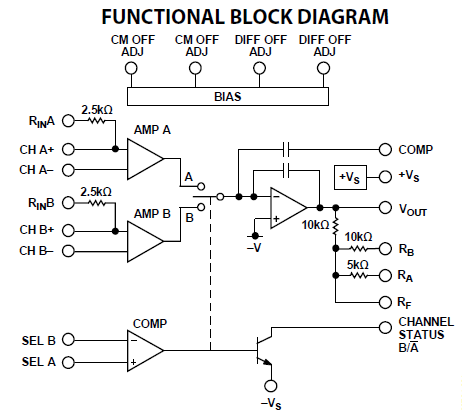 With the AD630 chip it is possible to realize various circuits in different configurations, the one shown below is the basic scheme of the lock-in amplifier with an input preamplifier stage and the low-pass filter at the output.
Our “made in china” equipment presumably follows a pattern very similar to this one. 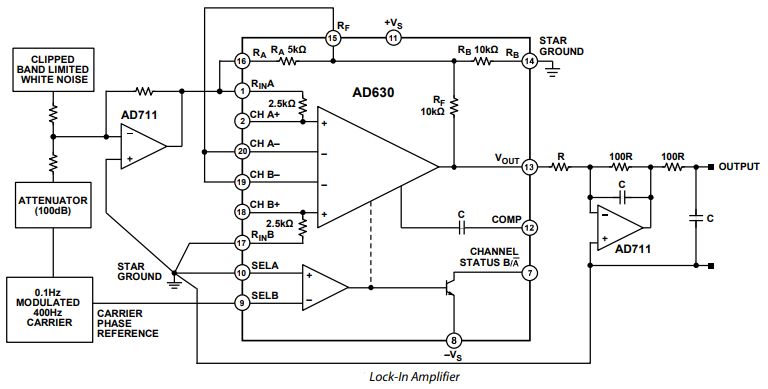 The signal (Signal In) and the reference (Reference) are brought to the board, as shown in the image below:

The output of the card is taken to a further low pass filter and post amplification stage in order to improve the output signal :

To test the amplifier we used a simple test application which consists in measuring the value of a small resistor, for example 1 Ω or 0.1 Ω, through the following scheme: 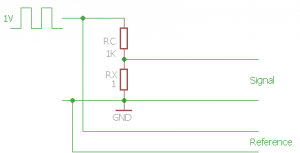 The reference signal is a square wave with 2 Vpp amplitude, the Rc series resistor is 1 KΩ, the signal for the amplifier is taken at the Rx resistor, for example 1 Ω nominal-value, in this situation the signal on Rx has amplitude of 1 mV. If the resistance were even smaller, for example 0.1 Ω, the signal would have an amplitude of just 100 μV. Similar values ​​are difficult to measure precisely because of the electronic noise which has a higher effective value.
The images below show the tracing of the reference and the trace of the signal taken from the Rx resistor. We see how the signal has a noise value that makes any measurement practically impossible. 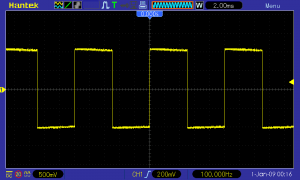 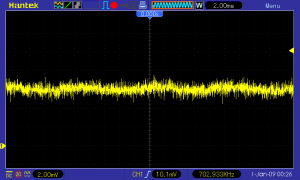 However, the lock-in amplifier technique comes to “rescue”. To improve the final output we use an additional amplifier that amplifies the lock-in output by a factor of 100, which added to its own gain brings a total gain of around 1000.
The image below shows the lock-in amplifier in the center and the post-amplifier at the bottom, in the top left there is the PCB with the resistor to be measured. The next image shows the activity of the 1 Ω nominal-value-resistor measurement, in which an output voltage of 1374 mV is generated. 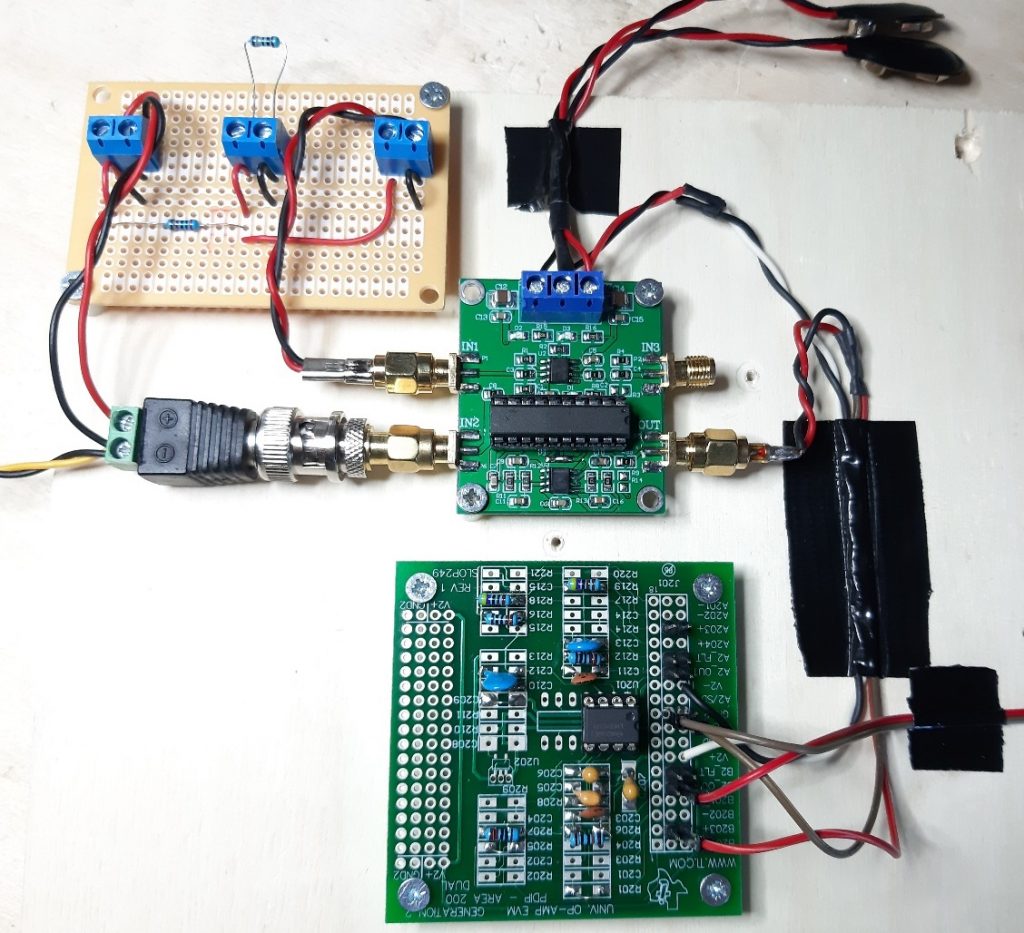 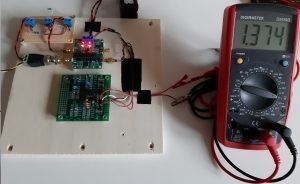 Of course our measurement technique needs a calibration phase, which we carry out with three calibrated resistors with values ​​of 0.1, 0.2 and 0.3 Ω respectively. The results are shown in the graph below which allows us to appreciate the linear connection between R and Vout at the amplifier output. 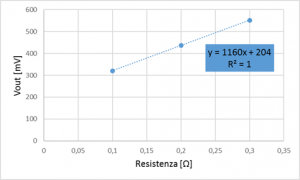 From the calibration report we can calculate the resistance value corresponding to the value of 1374 mV, we obtained in the 1 Ω nominal-value resistor measurement. From the calculation we get the value of 1.009 Ω which is well matched to the nominal value.

This simple application allowed us to test the operation of the “made in china” lock-in amplifier. The apparatus, despite its simplicity and low cost, has proven to be usable, when it is possible to modulate the signal, with the aim of extracting the signal even in the presence of a strong noise.