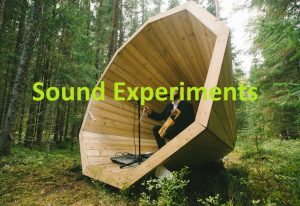 The most obvious use for a sound card interfaced with a computer, along with a microphone and speakers, is to explore the physics of sound and the propagation of acoustic waves. The sound card and its use we have already described in the following post: Sound Card Applications.
We now want to describe a series of simple experiences of sound waves physics that can be completed with a sound card, open software and a few other “low cost” components.

Measurement of Sound Speed ​​in Air

This is  a very important physical property, because it is also the speed of mechanical perturbations in a given substance.

The measure consists in arranging the two microphones separated from each other by a known distance (which we will then vary) and in producing a sound of short duration (for example a snap) in a place in front of the microphones.
The arrangement of the microphones is shown in the image below, the “lab jack” on the right is where the sound is produced by dropping a metal ball on the plate.

To better evaluate the time difference of arrival of the acoustic wave, samples can be exported and data can be acquired and displayed on Excel. Knowing the sampling frequency (f = 44.1 KHz, T = 22.67 μs) it is immediate to find the time difference.

By measuring for different distance values ​​of the two microphones we can more accurately evaluate the speed of the acoustic wave by tracing the regression line, as shown in the graph below. We get the value of 347 m/s, very close to the real value of 344 m/s.

The theory of sound tubes states that inside a tube of length L and diameter D, closed at one end, stationary resonance acoustic waves of frequency fn are formed and the frequency can be determined by the formula :

For a tube open at both ends, the formula for determining stationary frequencies is:

To derive these formulas it is sufficient to consider the “boundary conditions” so that a stationary wave can be established inside the tube : for example at the point corresponding to the cap the variation of air displacement is set to zero, while at the point corresponding to the the tube open, the pressure variation is set to zero because the air is at atmospheric pressure.
To obtain more precise results, however, it is necessary to take into account the “on-board effects” of the air near the pipe openings: in practice instead of length L the “effective length” must be used, which also takes into account the diameter D :

After this theoretical premise we briefly describe this simple experiment. A plastic tube about 1m long was used, at one end a microphone connected to the sound card was placed. The air in the tube was placed in “resonance” simply by blowing at the open end.
Measurements were made both with the open tube and with the tube closed. The image below shows the experimental setup.

With audacity the audio track is recorded, image below as an example, and from this audio track the frequency spectrum of the sound emission is calculated. 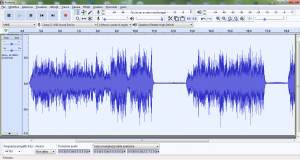 The diagram below shows the aspect of the frequencies that are produced in the case of a tube open  at both ends. In the following graph instead is shown the spectrum produced by a tube closed on one side. The peaks corresponding to the various harmonics that extend, with ever smaller amplitude, up to quite high frequencies, are very noticeable. 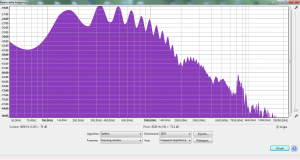 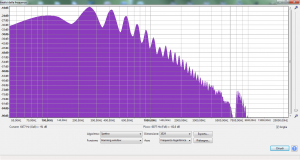 The following table compares, in the two cases of open and closed tube, the measured frequencies – and corresponding to the peaks on the audacity spectra – with the frequencies calculated using the formulas described at the beginning of the paragraph. As you can see the agreement between the theory and the experimental measure is good, even considering the fact that the effective length of the tube is an approximate value. 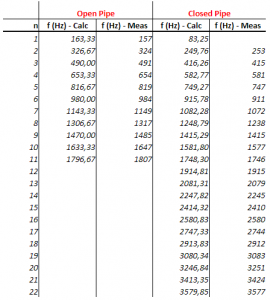 With our sound card and audacity software we can also easily make a qualitative demonstration of the doppler effect in acoustics. The Doppler effect is a physical phenomenon which consists in the apparent change, with respect to the original value, of the frequency or wavelength perceived by an observer reached by a wave emitted by a source that is in movement with respect to the observer himself . As we all know The Doppler effect can be seen by listening to the difference in the sound emitted by the siren of a rescue vehicle when it approaches and when it moves away, or that in the whistle of a train approaching before and then moving away.

For the theoretical explanation we refer to the numerous texts and websites that describe the phenomenon.

The experiment consists in using a simple buzzer with a battery attached to a rod and rotating this rod in front of the microphone connected to the sound card : in this way the buzzer will alternatively be approaching and moving away from the microphone.

For audio recording we use the audacity spectrogram function: this feature allows you to record and display the trend over time of the sound frequency spectrum, where the intensity is represented by the color.
The image below shows the spectrogram of the sound emitted by the buzzer when it is stopped with respect to the microphone. The lines correspond to the various frequencies and we see how these are constant over time.

The following graphs show instead the spectrograms that are obtained when the buzzer is rotated. We see how the frequency of the harmonics, as they are recorded by the microphone, varies cyclically between a maximum and a minimum around the value that one has when stopped. This variation corresponds to the moments in which the buzzer approaches / moves away from the microphone.

The graph below shows the magnified spectrogram of a high frequency harmonic in which the frequency shift of the sound emission is more evident.

Our sound card allows us to easily explore another interesting phenomenon: beats. In music theory, in physics and particularly in acoustics, beat is the frequency resulting from the superposition of periodic quantities, usually sinusoidal oscillations of different and near frequency. It is based on the properties of the superposition principle.

The phenomenon can easily be understood if we consider the mathematical sum of two sinusoidal functions (which represent two overlapping sounds):

are close to each other), the sum of the two sounds can be expressed as a sound of intermediate frequency, equal to

, whose amplitude is modulated at the much lower frequency

The experiment is performed by placing two loudspeakers horizontally on supports, driven by an amplifier and function generator. The microphone connected to the sound card is placed in the intermediate space between the speakers. By varying the frequency of the sound emitted by the two speakers, the audio track is acquired, always with audacity software.

The graph below shows the beat produced by two sounds, in the left part the two sounds have very close frequencies, while in the right part of the graph the frequencies are more distanced and in fact the envelope function has a greater frequency.