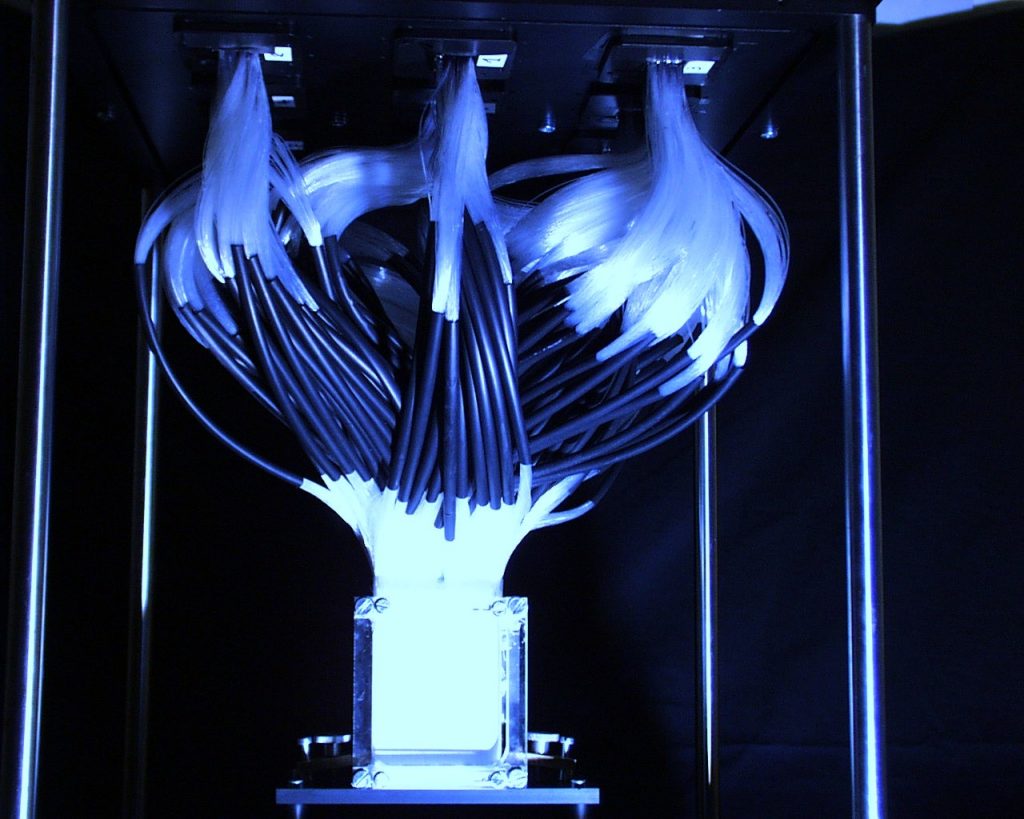 Muons are interesting particles. From all the space the cosmic rays reach the earth. As soon as they enter the upper layers of the atmosphere and interact with the nuclei of the gas molecules, they produce many muons. The muons, heavy cousins ​​of the electron, are unstable particles that “live” about 2.2 microseconds. That is, after about 2.2 μs they decay, in an electron and in a neutrino – antineutrino pair. The phenomenon of decay is a statistical phenomenon, some particles decay in more time, some others in less, but “on average” after a time t = 2.2 μs, called average life (or lifetime), half of them is gone.

The cosmic rays and muons in particular, have been much studied in the past: the research of Bruno Rossi, of Anderson, of Occhialini and the important experiment by Piccioni, Pancini and Conversi are famous.

Muons are still very studied, and we at PhysicsOpenLab try to make a precise measurement of their lifetime with a plastic scintillator, an acquisition electronics and a Raspberry Pi used as data logger.

The apparatus consists of a plastic scintillator coupled with PMT. The pulses produced by the photomultiplier are amplified and subsequently acquired by a PSoC card which sends the data to a Raspberry Pi for storage and processing. The acquisition apparatus has been described in detail in the posts Muon Lifetime Measurement with PSoC and Cosmic Ray Muons and Muon Lifetime.
The image below shows the basic scheme of the apparatus:

Image showing the scintillator, placed in a light-tight container, and the electronic part connected to the Raspberry Pi : 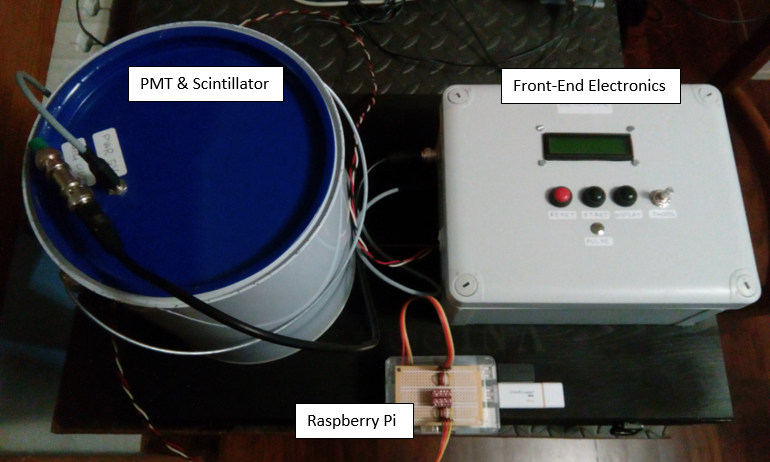 The temporal data on muon decays were acquired through a Raspberry Pi with a python software (post Raspberry Pi Logger (ENG) ), the data were recorded on file, the “data capture” lasted more than 10 days, with an average rate of 0.4 events per minute, we collected 9906 events.

The file, in csv format, containing the temporal data on muon decays is processed by a python software (kindly prepared by the friend Alessandro Ebranati) that generates the histogram and determines the exponential function that best approximates the experimental data (best fitting). The software is based on the python libraries numpy, matplotlib and scipy. Here are some pieces of code to illustrate the various steps:

The histogram is generated with the numpy library:

The best fitting is obtained with the curve_fit function of the scipy library:

The whole, histogram and best fitting function, is returned in graphic form with the functions of the matplotlib library. Download of the python application: lettura_istogramma_e_fit

The histogram with the collected data is shown in the image below. The maximum time acquired is 20 μsec. The time interval 0 – 20 μsec is subdivided into 200 bins, each of which is large 0.1 μsec, the first 6 bins (0.6 μsec) have been discarded because such short time intervals are affected by greater uncertainty. The total number of recorded events is 9906 events.
Based on these data, the exponential function that best suits the collected data was determined. In the fitting function, an offset has also been inserted in order to take into account events that are temporally close but not correlated with each other (noise).

The time constant of the exponential (which corresponds to the lifetime of the muon) is:

The muons whose lifetime we measure necessarily interact with matter inside the scintillator crystal. Negative muons that stop in the scintillator can bind to the carbon and hydrogen nuclei in much the same way as electrons do. Since the muon is not an electron, the Pauli exclusion principle does not prevent it from occupying an atomic orbital already filled with electrons. Such bound negative muons can then interact with protons, producing a neutron and a neutrino :

This interaction can happen before they spontaneously decay. Since there are now two ways for a negative muon to disappear, the effective lifetime of negative muons in matter is somewhat less than the lifetime of positively charged muons, which do not have this second interaction mechanism.

The muon lifetime we measure with this instrument is an average over both charge species so the mean lifetime of the detected muons will be somewhat less than the free space value τμ =2.19703 ± 0.00004 μsec.

Our measurement of the muon lifetime in plastic scintillator is an average over both negatively and positively charged muons. We have already seen that negative μ have a lifetime somewhat smaller than positively charged muons because of weak interactions between negative muons and protons in the scintillator nuclei. This interaction probability is proportional to Z4 where Z is the atomic number of the nuclei, so the lifetime of negative muons in scintillator and carbon should be practically equal. This latter lifetime τc is measured to be τc = 2.043 ± 0.003 μsec.
So we can write :
For positive muons τ+ =2.19703 ± 0.00004 μsec
For negative muons τ– =2.043 ± 0.003 μsec
The value we observe should be the average between these two values. Assuming that the number of positive muons is equal to the number of negative ones (the scientific literature shows that there is a small prevalence of positive muons, but for our level of analysis we can assume them to be the same number) the average decay time is :

The value obtained from our measure is : τ = 2.11 ± 0.04 μsec which is in perfect agreement with the expected value.