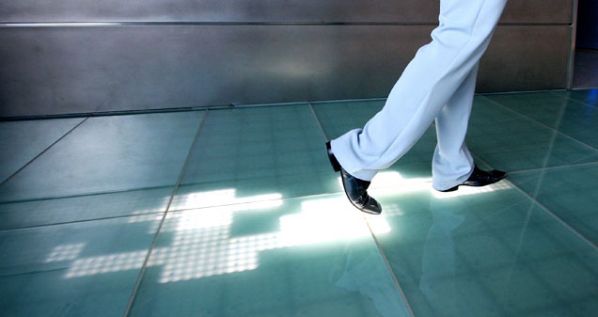 Piezoelectricity is the electric charge that accumulates in certain solid materials (such as crystals, certain ceramics, and biological matter such as bone, DNA and various proteins) in response to applied mechanical stress. The word piezoelectricity means electricity resulting from pressure. French physicists Jacques and Pierre Curie discovered piezoelectricity in 1880.

The piezoelectric effect results from the linear electromechanical interaction between the mechanical and electrical states in crystalline materials with no inversion symmetry. The mechanical stress modifies the positions of the atoms slightly within the crystal structure, such that the polarization of the material changes. The structure of these crystals consists of microscopic electric dipoles. In quiet conditions, these electric dipoles are arranged in such a way that the crystal faces all have the same electrical potential. When a force is applied from the outside, compressing the crystal, the crystal structure is deformed and the electrical neutrality condition of the material is lost, so that one crystal face is negatively charged and the opposite face is positively charged. In the case in which the crystal is subjected to traction, the sign of the electric charge of these faces is inverted.
The crystal therefore behaves like a capacitor to which a potential difference has been applied. So if the two faces are connected via an external circuit, an electric current is generated, called piezoelectric current. 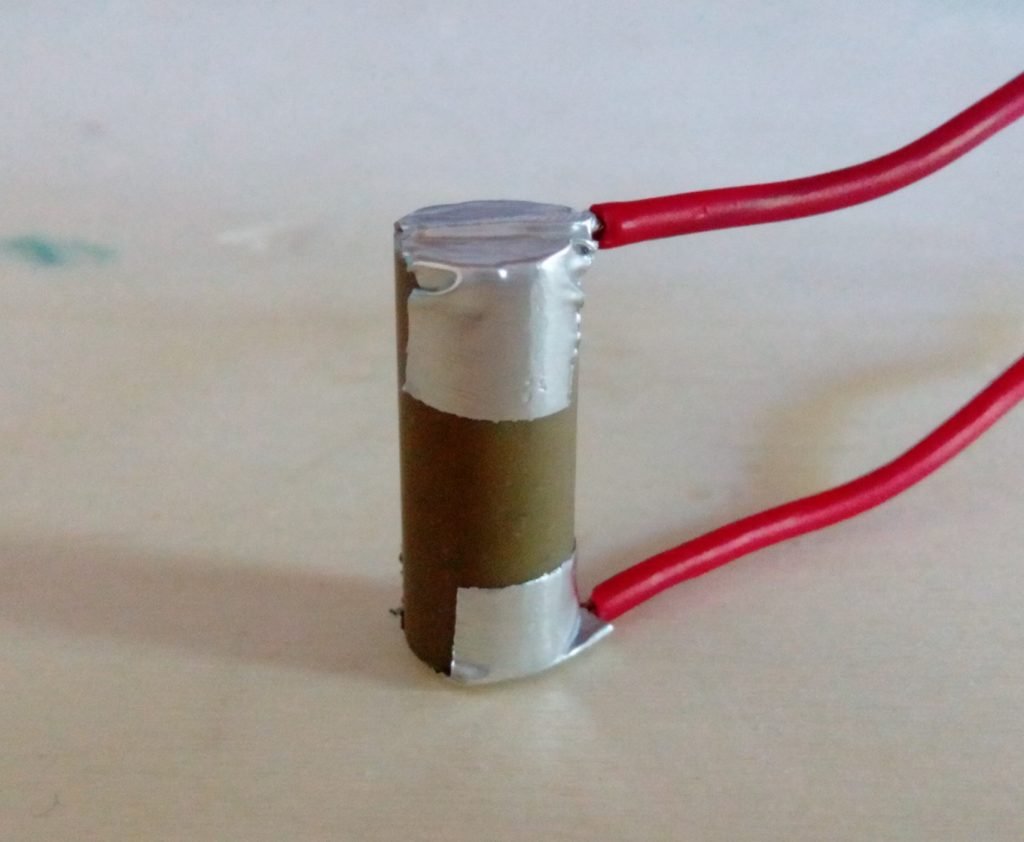 For example, lead zirconate titanate crystals (PZT), in the image on the side we see the PZT cylinder used for our tests, will generate measurable piezoelectricity when their static structure is deformed by about 0.1% of the original dimension. Conversely, those same crystals will change about 0.1% of their static dimension when an external electric field is applied to the material.

The graph below shows the typical impulse that is obtained from the PZT cylinder (collected by the two electrodes placed at the two ends) when it is hit along the vertical direction. There are two peaks, one positive and one negative, which correspond to the compression and subsequent distension of the material. The signal produced by the piezoelectric crystal can be related to the sound vibration produced by the deformation resulting from the impact. To check it we placed a microphone close to the crystal and we acquired both signals with the oscilloscope. The correspondence of the impulses, as expected, is excellent. The graph below shows the yellow trace coming from the microphone, which indicates the sound vibration, while the blue trace is the piezoelectric signal generated by the crystal. 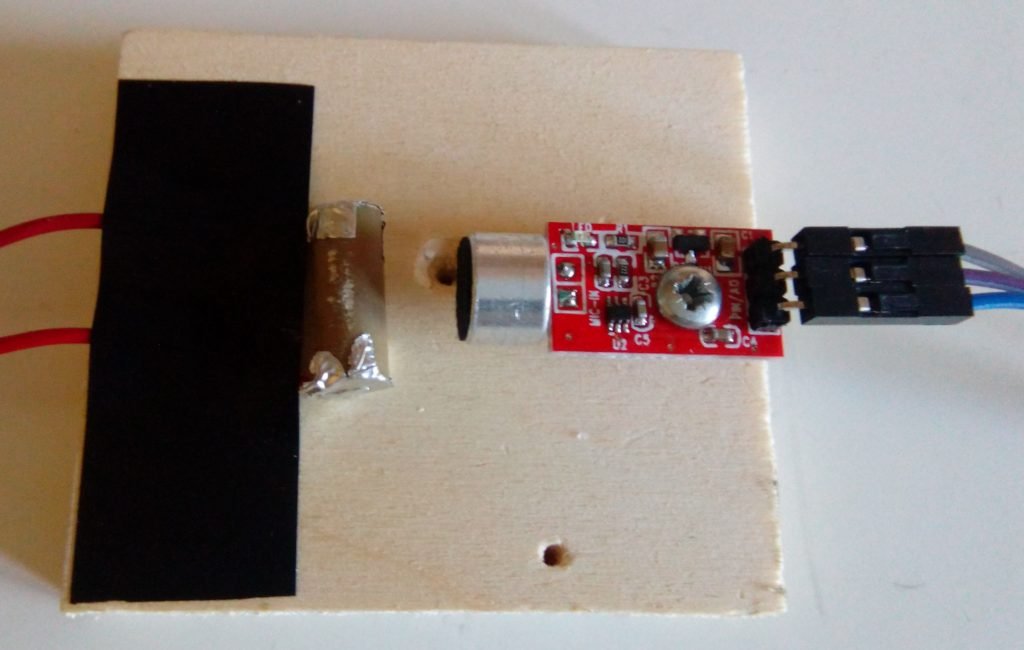 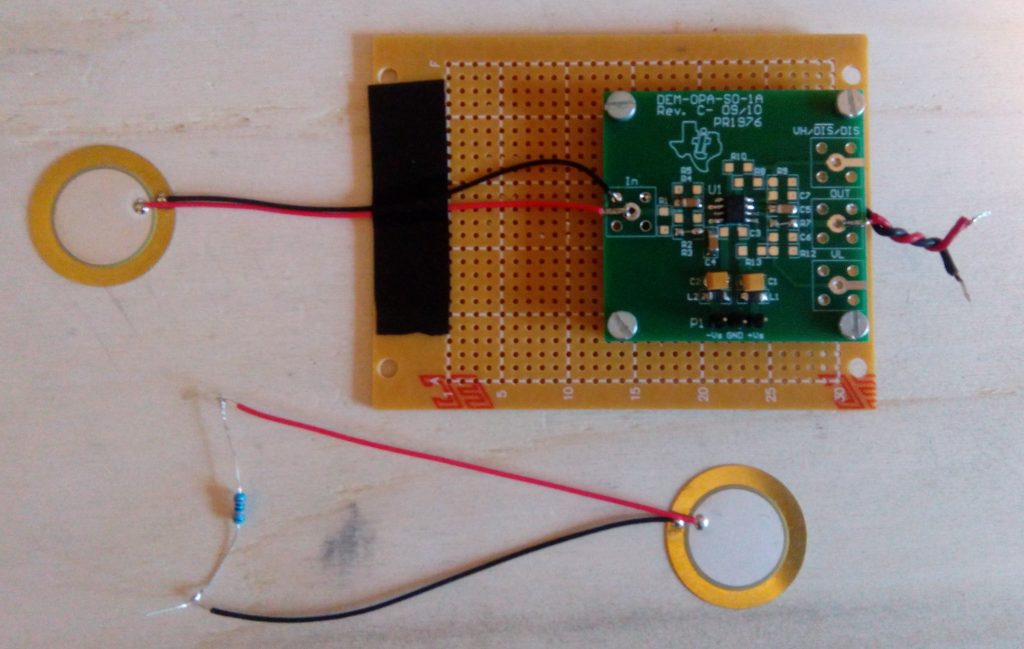 The graph below shows the pulses produced by the piezoelectric sensor tapped with the fingers. The second graph shows instead the impulse that is obtained by using the charge preamplifier. Pyroelectricity (from the Greek pyr, fire, and electricity) is a property of certain crystals which are naturally electrically polarized and as a result contain large electric fields. Pyroelectricity can be described as the ability of certain materials to generate a temporary voltage when they are heated or cooled. The change in temperature modifies the positions of the atoms slightly within the crystal structure, such that the polarization of the material changes. This polarization change gives rise to a voltage across the crystal. If the temperature stays constant at its new value, the pyroelectric voltage gradually disappears due to leakage current (the leakage can be due to electrons moving through the crystal, ions moving through the air, or current leaking through a voltmeter attached across the crystal).

When the crystal is heated, a polarization of charges is formed and therefore a voltage between the two surfaces of the crystal. This voltage can be detected with the oscilloscope probe, connecting the GND tip to the aluminum block and touching the top surface of the crystal with the other tip. The measurement causes the rebalancing of the charges and therefore the scope displays a pulse with exponential decay. An example is shown in the graph below.
It is noted that the values ​​that are obtained are extremely high: over 10 – 20 KV.