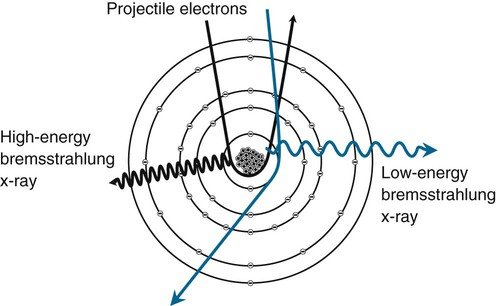 Bremsstrahlung (from bremsen “to brake” and Strahlung “radiation”; i.e., “braking radiation” or “deceleration radiation”) is electromagnetic radiation produced by the deceleration of a charged particle when deflected by another charged particle, typically an electron by an atomic nucleus (as depicted in the image above). The moving particle loses kinetic energy, which is converted into a photon, thus satisfying the law of conservation of energy. The term is also used to refer to the process of producing the radiation. Bremsstrahlung has a continuous spectrum, which becomes more intense and whose peak intensity shifts toward higher frequencies as the change of the energy of the decelerated particles increases. The maximum radiation frequency is related to the kinetic energy of the electrons by the relationship

and therefore the minimum value for the wavelength of the emitted radiation is also known:

Broadly speaking, bremsstrahlung or braking radiation is any radiation produced due to the deceleration (negative acceleration) of a charged particle, which includes synchrotron radiation (i.e. photon emission by a relativistic particle), cyclotron radiation (i.e. photon emission by a non-relativistic particle), and the emission of electrons and positrons during beta decay. However, the term is frequently used in the more narrow sense of radiation from electrons (from whatever source) slowing in matter.

According to Maxwell’s equations, accelerated charges emit electromagnetic radiation. In particular, when an electron hits a material, it is subjected to a scattering by the coulomb field of an atomic nucleus, so it can be thought that it is “braked”. If the energy of the bombarding electrons is high enough, the emitted radiation lies in the X-ray region of the electromagnetic spectrum.

The energy loss for bremsstrahlung is significant – that is, over the ionization and nucleus excitation processes – for highly energy electrons (in the order of hundreds of MeV in air and water, and tens of MeV in heavy materials such as lead or iron). The average energy loss per  length unit can be roughly calculated with the following :

is the number of atoms per volume unit, Z is the atomic number of the target material,

is the fine structure constant and

is the electron mass.
It is therefore clear that the loss of energy is proportional to Z2 , to the energy of particle E and inversely proportional to the mass of the particle. For particles heavier than the electron the bremsstrahlung radiation is negligible. The logarithmic term is due to the partial shielding of nuclear charge by atomic electrons. The formal treatment through quantum mechanics was carried out by Hans Bethe and Walther Heitler in 1934. 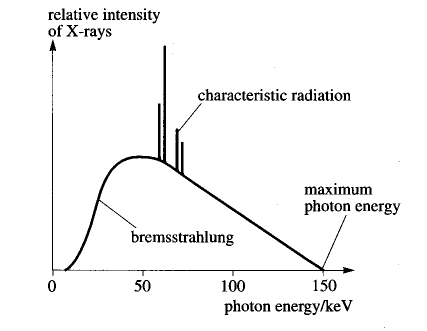 This continuous spectrum overlaps even single strong lines, as bombarding electrons can expel electrons from the most internal atomic shells of the target, and the rapid filling of these gaps by other electrons of the upper layers produces characteristic X-ray for each atom (called “X ray fluorescence”), As shown in the image to the side.
Alternatively, the energy difference between the two orbits will result in the further expulsion of electrons. This phenomenon is the Auger effect.

We have used a gamma detector with NaI(Tl) 63×63 mm crystal, put in a lead shielded measurement well. The Sr90 source has been put at the bottom and shielded with two 1,2 mm thick lead sheets, total thickness 2,4 mm. The two images below show the schematic of the apparatus and the source attached to the scintillator crystal along with the lead sheets. 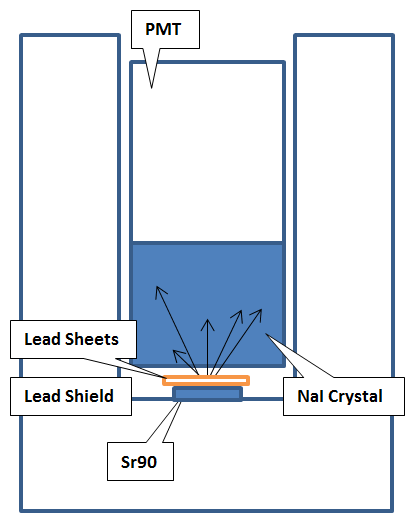 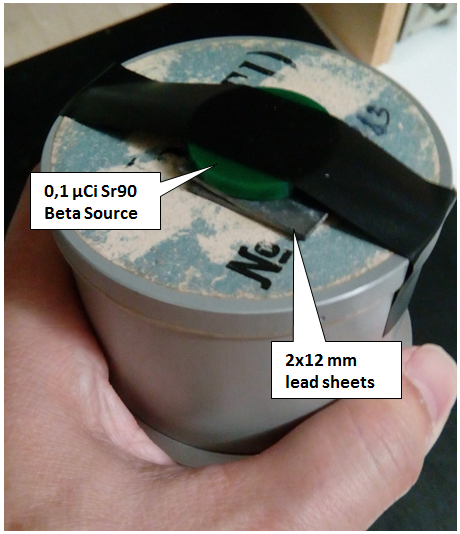 The figure below shows the radiation spectrum superimposed on the background spectrum. Both spectra have been acquired for several hours. 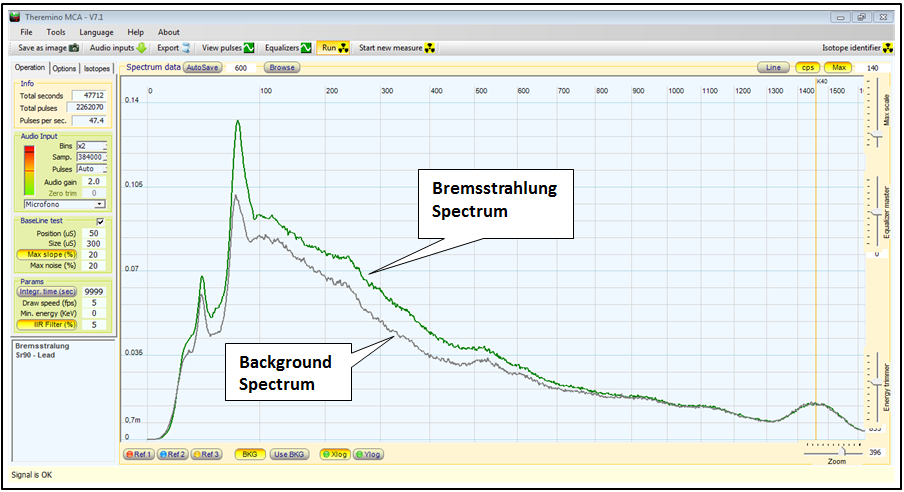 By subtracting the background spectrum, it is possible to obtain a good representation of the bremsstrahlung X / gamma spectrum. The graphs below show the spectrum that you get. 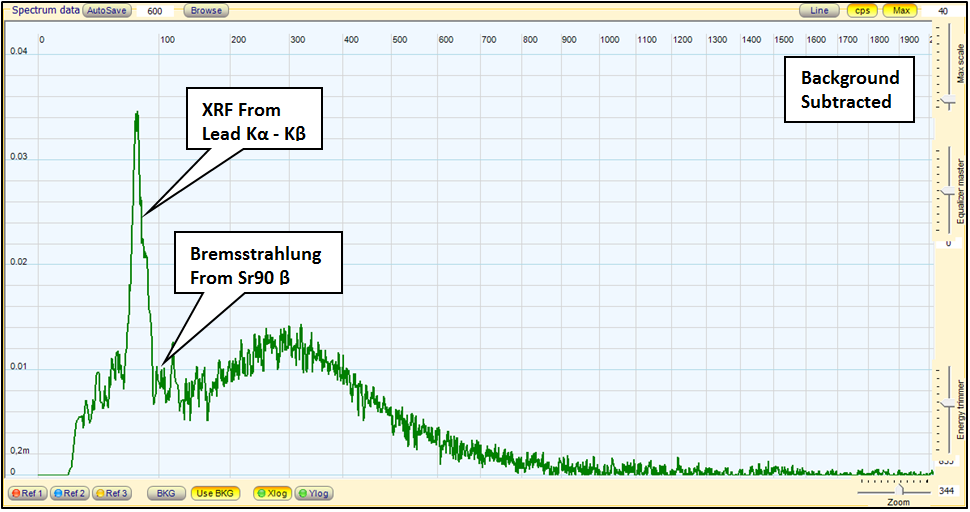 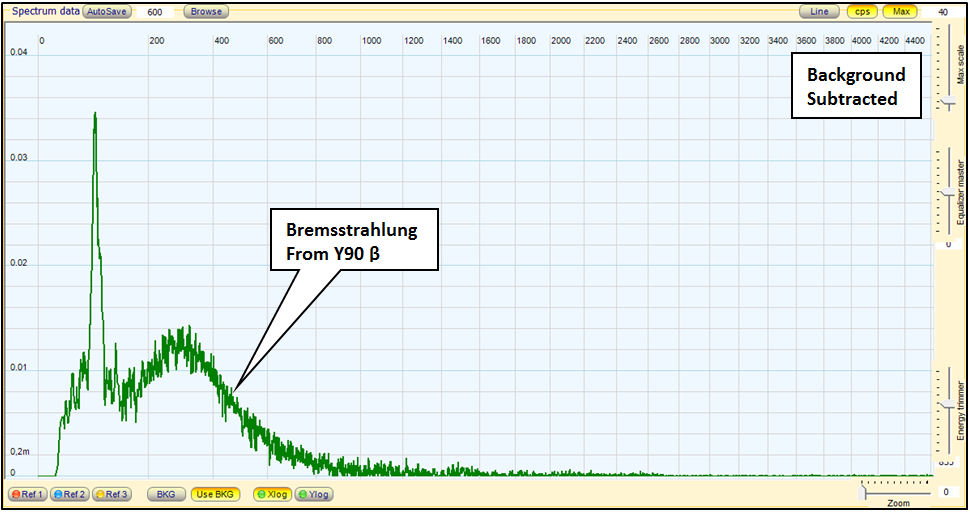 There are three main features of great interest : 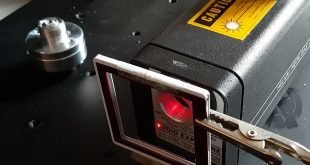 PDF Abstract: in this post we propose two applications of diffraction theory for the measurement …