Quantum tunneling or tunneling refers to the quantum mechanical phenomenon where a particle tunnels through a barrier that it classically could not surmount. This plays an essential role in several physical phenomena, such as the alpha decay and the nuclear fusion that occurs in main sequence stars like the Sun. It has important applications to modern devices such as the tunnel diode, quantum computing, and the scanning tunneling microscope.

Tunneling is often explained using the Heisenberg uncertainty principle and the wave–particle duality of matter. Pure quantum mechanical concepts are central to the phenomenon, so quantum tunneling is one of the novel implications of quantum mechanics.

Quantum tunneling falls under the domain of quantum mechanics: the study of what happens at the quantum scale. This process cannot be directly perceived, but much of its understanding is shaped by the microscopic world, which classical mechanics cannot adequately explain. To understand the phenomenon, particles attempting to travel between potential barriers can be compared to a ball trying to roll over a hill; quantum mechanics and classical mechanics differ in their treatment of this scenario. Classical mechanics predicts that particles that do not have enough energy to classically surmount a barrier will not be able to reach the other side. Thus, a ball without sufficient energy to surmount the hill would roll back down. Or, lacking the energy to penetrate a wall, it would bounce back (reflection) or in the extreme case, bury itself inside the wall (absorption). In quantum mechanics, these particles can, with a very small probability, tunnel to the other side, thus crossing the barrier. Here, the “ball” could, in a sense, borrow energy from its surroundings to tunnel through the wall or “roll over the hill”, paying it back by making the reflected electrons more energetic than they otherwise would have been.

The reason for this difference comes from the treatment of matter in quantum mechanics as having properties of waves and particles. One interpretation of this duality involves the Heisenberg uncertainty principle, which defines a limit on how precisely the position and the momentum of a particle can be known at the same time. This implies that there are no solutions with a probability of exactly zero (or one), though a solution may approach infinity if, for example, the calculation for its position was taken as a probability of 1, the other, i.e. its speed, would have to be infinity. Hence, the probability of a given particle’s existence on the opposite side of an intervening barrier is non-zero, and such particles will appear on the ‘other’ (a semantically difficult word in this instance) side with a relative frequency proportional to this probability.
The image below shows the wave function of a particle after a potential barrier.

The Tunnel effect is involved in many physical phenomena and even in some common technological applications, we see some examples.

The emission of α particles from various radionuclides is one of the first discoveries of modern physics: in 1908 Rutherford demonstrated that such radiation is made up of He nuclei. Among the components of the radioactive families there are about 30 α emitters. Most of the artificially created isotopes with atomic number greater than lead are α emitters. For a nucleus, to decay α, it is necessary that the process is energetically possible, that is, the difference between the initial mass of the nucleus and the sum of the mass of the final nucleus and the helium nucleus must be positive and transformed into the kinetic energy of the two nuclei.
Generally, the energy of emitted alpha particles varies between 4 and 9 MeV and the decay time constants of the emitter nuclei varies between 1010 y and 10-7 s.
Alpha decay has already been described in the following posts: Alpha Radioactivity and Some Alpha Spectra.

By comparing alpha particle energy and decay time it is noted that lower energies correspond to longer half-lives and vice versa: this is a general rule observed and studied since 1911 by Geiger and Nuttal, which found the following rule : for the same radioactive series, the logarithm of the decay constant λ depends linearly on the logarithm of the energy of the emitted alpha particles : ln(λ) = A + B·ln(E). If you group α-emetting radionuclides belonging to the same elements, the results shown in the following figure show the linear trend on a logarithmic scale (exponential on a linear scale). 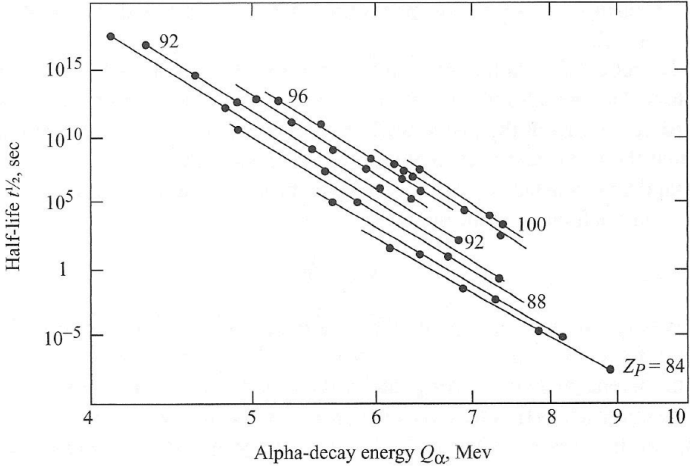 The rule of Geiger and Nuttal was found phenomenologically, but can be deduced also through quantum mechanics: indeed, the theory of decay α was one of the first achievements of the application of quantum mechanics to a problem of nuclear physics (1928, Gamow, Condon And Gurney). 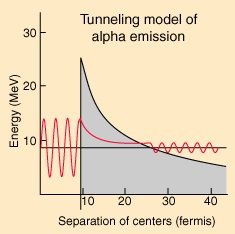 Having this ΔE kinetic energy, α particles should leave the nucleus in a time around : t ≈ R/Vα where R is the radius of nucleus and Vα the speed of the particle. Even for the minimum observed kinetic energy Tα = 4 MeV, the above numerical calculus gives the value 7×10-22 s. Instead, the average lives of α-emitting radionuclides can also be in the order of a billion years. If we analyze the trend of the potential energy U(r) versus the distance, we get a pattern of the type shown in the figure to the side.
Where R = 10 fm is the nuclear radius; for r<R the nuclear forces predominate (schematized as a constant potential pit), while for r>R the nuclear forces, because their very short range, are ineffective and dominate the Colombian field, with typical potential of the type 1/r. The alpha particle, immersed in nucleus, is located in the area with r<R.
If we measure the kinetic energy Tα of the particle emitted from the nucleus (for r → ∞), we find values in the range 4 and 9 MeV. While the coulombian barrier is around 30 MeV.

But now there is the reverse problem: classically the α particle could never leave the nucleus, and there would be no α-emitters nuclei.

This paradox was solved by Gamow, Condon and Gurney (1929), who, quantitatively treating the problem, showed the existence of a finite chance of escape even if classic mechanics predicted an absolutely insurmountable barrier : this is known as Tunnel Effect.

By solving the Schrodinger equation for a particle in a potential well, a decreasing exponential trend is found inside the barrier, and a non-zero wave function outside the barrier. This also explains the exponential link between the decay constant (which expresses the probability of tunneling) and the energy of the α-emitted particle.
It also explains the existence of a lower limit for the kinetic energy of the particle α. For Tα < 2 MeV the mean life becomes so long that it is practically impossible to reveal α particles.

QTCs are flexible polymers that have extraordinary electrical properties. In their normal state they are perfect insulators but when compressed they become good conductors and allow for high currents to pass.

QTCs are composite materials made up of metal nano-particles immersed in a non-conductive elastomer, they are used as pressure sensors. The operating principle is based on the quantum tunnel: without pressure, the conductive elements are too far apart to conduct electricity; when pressure is applied, the metallic particles approach and electrons can move from one particle to another by crossing the insulating layer by tunnel effect. The images below show the internal conformation of a QTC and an image captured by the electronic microscope: it is noticed that the nano-particle has numerous spikes that facilitate the occurrence of the tunnel effect. 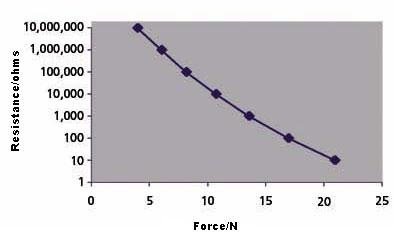 The effect is far more pronounced than what would be expected from classical (non-quantum) effects, as the “classical” electrical resistance varies linearly (proportional to distance), while quantum tunneling varies exponentially to decreasing distance, by activating a resistance change of a factor up to 1012 between without and with pressure conditions. As shown in the figure below.

Measuring in a normal laboratory such wide resistance variations is not easy, but you can do a simple test by measuring the resistance of a QTC in the unloading condition and applying a pressure and verifying the difference.

QTC (black little pad in the center) and metallic contacts. 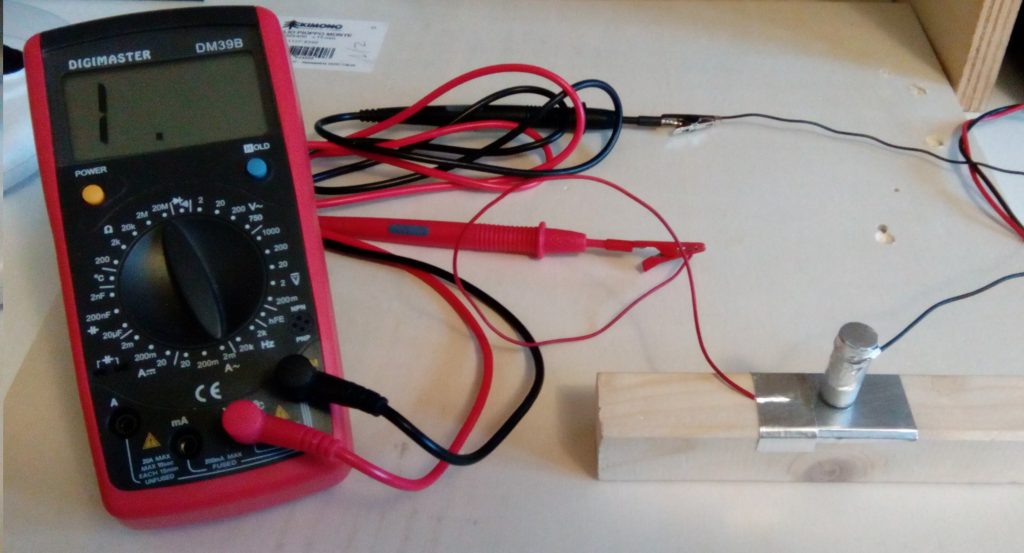 From the tests carried out, we see how the QTC behaves like a kind of switch that reacts to the applied pressure. This behavior and the fact that the elastomer can be easily prepared in various shapes and embedded in other objects make the QTC interesting for many applications.

The tunnel effect also applies to the so-called consumer electronics, indeed it is at the basis of the operation of the Floating Gate MOSFET, component used in computer memories. 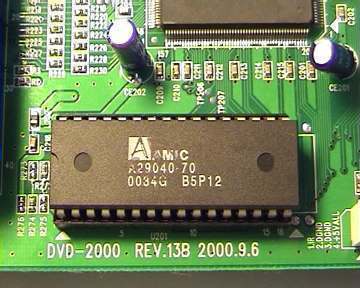 Floating Gate MOSFET (FGMOS) is e field effect transistor with a structure similar to the MOSFET. This is a conventional MOS transistor with the addition of a further gate terminal, known as Floating Gate, Located between the substrate and the Control Gate And separated from them by silicon dioxide SiO2. This structure is a capacitor, and is capable of holding electric charge for very long time, which has allowed it to be used as memory cell in many electronic applications. Some of the many FGMOS applications include EPROM, EEPROM and flash memories.

The charges in the floating gate are electrically isolated and therefore the charge injection can take place in special modes, for example, thanks to the tunnel effect, in the case of the EEPROM. 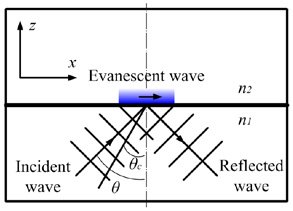 Using 3 cm microwaves generated by a gunnplexer and paraffin prisms, as described in the post Microwaves Optics, it is possible to demonstrate a very similar effect to the quantum tunnel of a particle. In the case of microwave we are in the presence of an electromagnetic wave (photon) which is reflected by an interface surface, such as the inner surface of a paraffin prism. From the electromagnetic equations the incident wave is totally reflected by the surface, while beyond the interface surface there is an evanescent wave (leaky wave) with exponentially decreasing amplitude, just as the wave function of a particle confined in a potential well. The evanescent wave does not correspond to real electromagnetic radiation and in fact beyond the surface of the paraffin prism the measurement is zero as seen in the following image: 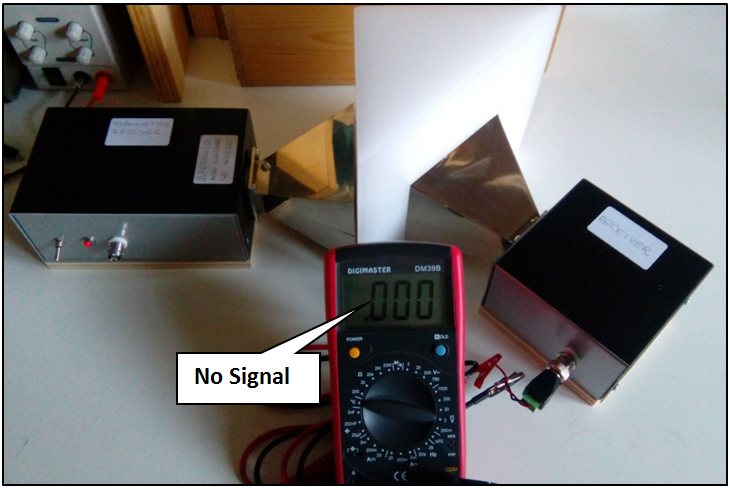 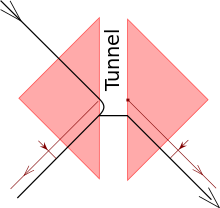 The situation, however, changes if another prism is put side by side the first paraffin prism and is placed at a distance below the wavelength of the radiation, i.e. about 3 cm.
In this latter case, the evanescent wave “passes” the forbidden area between the two prisms and gives rise to a real electromagnetic wave propagating in the second prism, just like a particle that “drill” a potential tunnel barrier.
This effect can be easily verified by placing the two prisms as shown in the figure below and measuring the signal after the second prism. In this way you can also check the dependence of the signal with the separation distance between the two prisms.