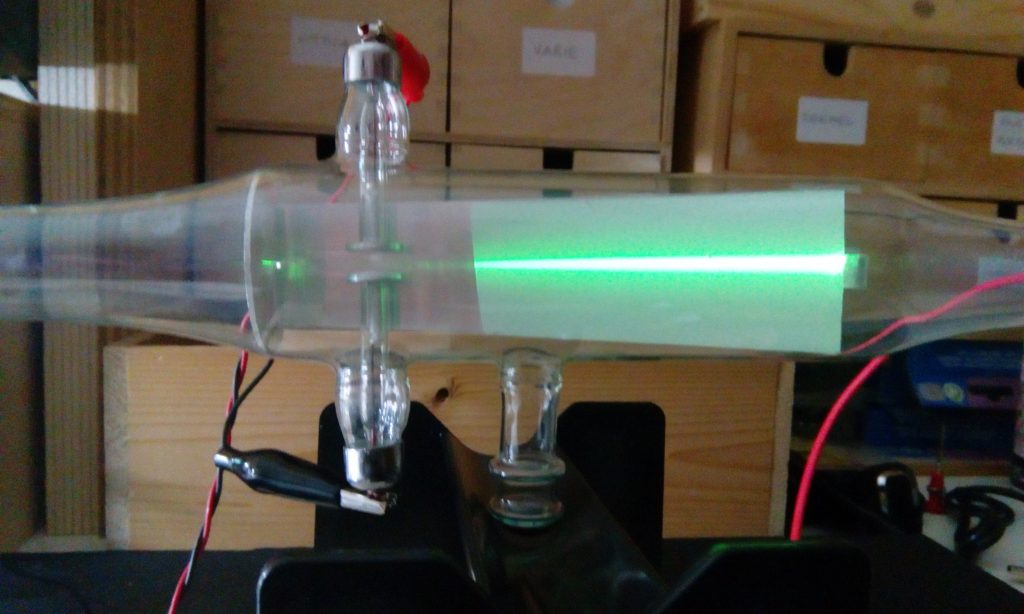 A Crookes tube is an early experimental electrical discharge tube, with vacuum, invented by English physicist William Crookes and others around 1869-1875, in which cathode rays, streams of electrons, were discovered.

Developed from the earlier Geissler tube, the Crookes tube consists of a partially evacuated glass bulb of various shapes, with two metal electrodes, the cathode and the anode, one at either end. When a high voltage is applied between the electrodes, cathode rays (electrons) are projected in straight lines from the cathode. It was used by Crookes, Johann Hittorf, Julius Plücker, Eugen Goldstein, Heinrich Hertz, Philipp Lenard and others to discover the properties of cathode rays, culminating in J.J. Thomson’s 1897 identification of cathode rays as negatively charged particles, which were later named electrons. Crookes tubes are now used only for demonstrating cathode rays.

Wilhelm Röntgen discovered X-rays using the Crookes tube in 1895. The term Crookes tube is also used for the first generation, cold cathode X-ray tubes, which evolved from the experimental Crookes tubes and were used until about 1920.

The picture below illustrates the operation of a Crookes tube in a schematic way.

For experiments with cathode ray tube we used an educational model readily available on eBay. It is a tube equipped with cathode and anode, with a mask with a slit so as to produce a planar cathode ray beam, there is also a fluorescent screen so as to highlight in a visual manner the presence of the beam. Two plates, used to demonstrate the influence of an electric field on the electron beam, complete the fixture. The images below show the apparatus. 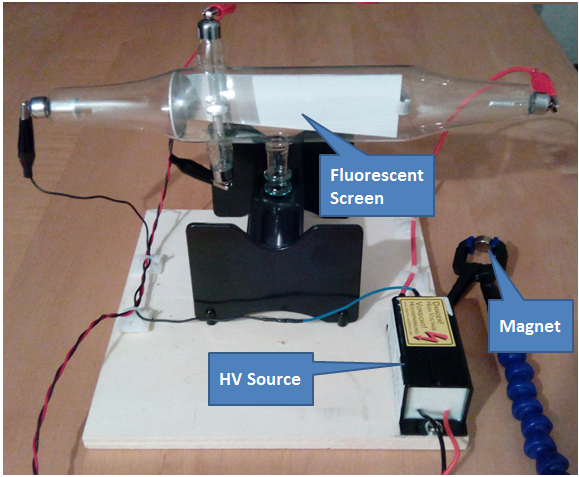 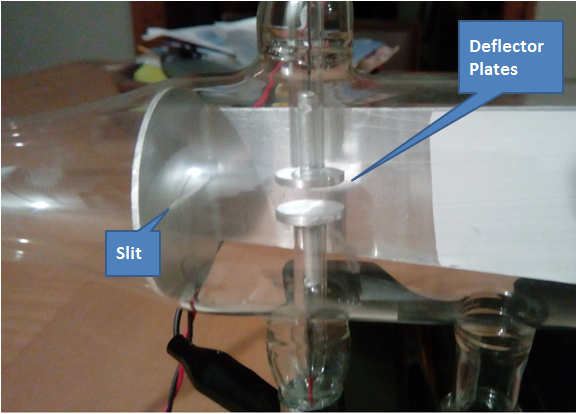 The high voltage between anode and cathode is obtained with a HV generator powered with a 12 V, it generates a voltage value of 10 KV. The high voltage generator is a compact module easily available online, however you can use any HV generator, such as the ones based on diodes and capacitors in Cockcroft-Walton voltage multiplier configuration.

As we know, cathode rays are made up of electrons that are accelerated from the cathode to the anode. These are therefore negatively charged moving particles in a straight line, as such they are subject to the Lorentz force, which governs the motion of charged particles within magnetic fields.
Generally speaking, the force exerted on a charge q moving with speed v within a magnetic field B and electric field E, is calculated with the following formula :

In our case, the electric field is null and the moving charged particles are electrons, so the formula becomes:

Given the vector product between v and B, the force is perpendicular to both the direction of the magnetic field and the velocity direction. The picture below illustrates the effect of Lorentz interaction. 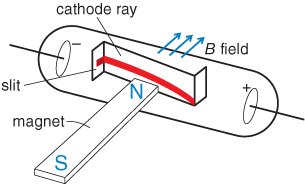 This phenomena can be easily verified by using our cathode tube and a permanent neodymium magnet: by approaching the magnet to the tube, the beam is deflected low or upward depending on the polarity of the magnet. The image and video below show this experimental test. 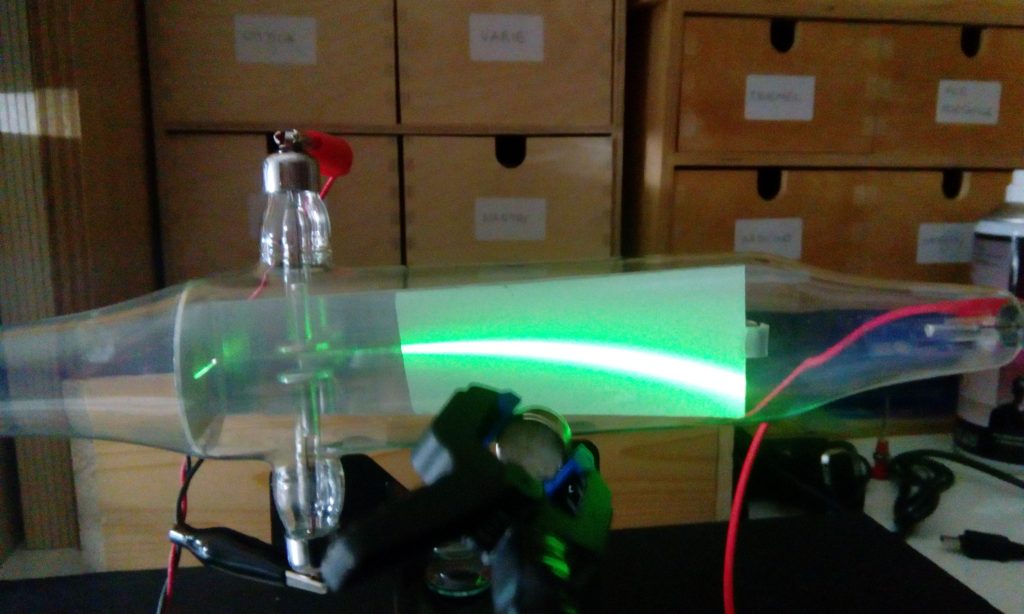 The cathode ray beam is obviously sensitive to electric fields as well. From the law of Lorentz we get:

The force is proportional to the intensity of the electric field, and is directed in the opposite direction since the charge of the electron is negative, as shown in the picture below. 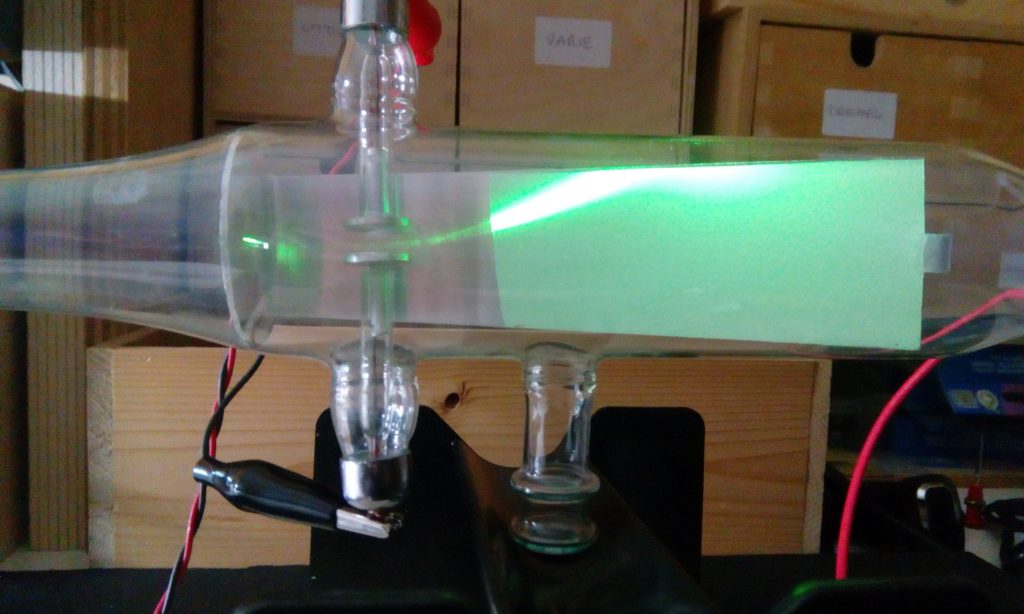 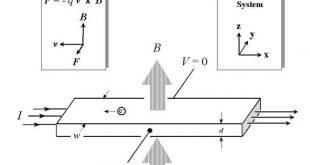