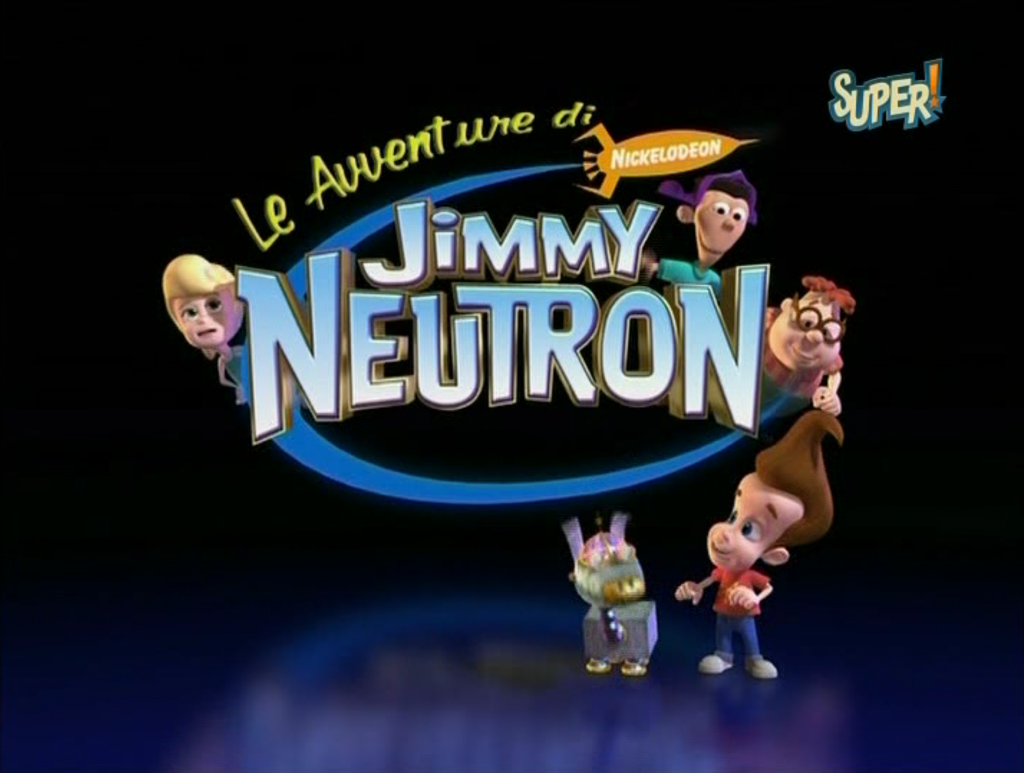 With neutrons we enter the “heart” of nuclear physics. As known it is a sub-atomic particles contained in the nucleus, they are characterized by a mass slightly superior to that of the proton and neutral charge. Outside the nucleus, neutrons are unstable and have a half-life of about 15 minutes. They decay into a proton by emitting an electron and an antineutrino in a reaction known as beta decay.

The common means of detecting a charged particle by looking for a track of ionization (such as in a cloud chamber) does not work for neutrons directly. Neutrons that elastically scatter off atoms can create an ionization track that is detectable, but the experiments are not as simple to carry out; other means for detecting neutrons, consisting of allowing them to interact with atomic nuclei, are more commonly used. The commonly used methods to detect neutrons can therefore be categorized according to the nuclear processes relied upon, mainly neutron capture or elastic scattering

A common method for detecting neutrons involves converting the energy released from neutron capture reactions into electrical signals. Certain nuclides have a high neutron capture cross section, which is the probability of absorbing a neutron. Upon neutron capture, the compound nucleus emits more easily detectable radiation, for example an alpha particle, which is then detected. The nuclides 3He, 6Li, 10B are useful for this purpose. This is especially true for slow (or thermal) neutrons.

Precisely because of their low probability of interaction, the detection of neutrons is more difficult than the detection of other particles or ionizing radiation. The detection is mainly based on absorption by nuclei of light elements and the subsequent disintegration of these nuclei which produce particles that can be detected with “traditional” methods: in practice the neutrons are detected “indirectly”.

The neutron detector that we want to use are Soviet models SI19N and SNM11, easily available online for example on eBay. These detectors are corona tubes in which on the inner face of the tube has been deposited a thin layer of boron-rich material, in particular the boron isotope 1oB. The following pictures show respectively the SI19N and SNM11  tubes. 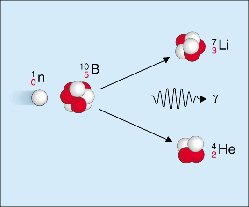 The sensitivity to neutrons of these tubes is due to the nuclear reaction which occurs when a neutron is absorbed by a boron nucleus. The boron nucleus, unstable, disintegrates and produces a lithium nucleus and an alpha particle. The cross section of this reaction is very high and therefore the sensitivity of these detectors is relatively high. The figure on the left side and on the following scheme showing the details of the reaction, it is seen that the energy released is of the order of 2 – 3 MeV.
It is also important to point out that the high boron cross section applies only to slow neutrons (or thermal) with energy of about KT = 0,025 eV; for the fast neutrons the cross section is much lower so as the sensitivity of the detector.

The lithium nucleus and the alpha particle produced by the disintegration of boron nucleus, when they are emitted towards the inside of the tube, produce an intense ionization that starts the discharge within the tube, exactly as occurs inside a tube geiger. In fact, as the Geiger tubes, also these tubes operate in the discharge area, above a certain threshold, as shown in the following scheme. 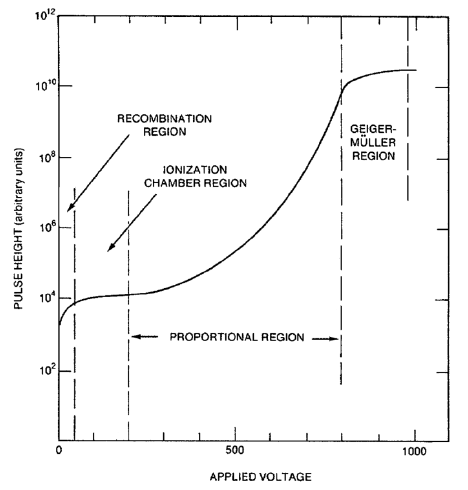 In order to “quench” the corona discharge it is necessary to insert a very high value biasing resistance that has the function of limiting the discharge current and reduce the voltage between the anode and cathode below the threshold. Compared to normal Geiger counters for which a 10 MΩ resistance is sufficient, in the case of these tubes for neutrons it is appropriate to use higher values, for example from 100 MΩ.

The neutron detector with corona tube has a scheme of functionally quite similar to that of a normal Geiger tube, given that both work in the discharge region. there is a HV generator, a bias resistor and a coupling capacitor to extract the pulse. The pulse can subsequently be read out on a load resistor or it can be sent to a chain of amplification and comparison with the purpose of improving the S / N ratio and to make possible the acquisition by a digital counting system. For the characteristics of the corona tube it is appropriate to use high-value bias resistors, for example 100 MΩ.
The figure shown, taken from Bob Higgins work, illustrates the basic diagram.

As was described in the previous paragraph, the corona tube is sensitive, due to the borate layer placed inside, to the slow or thermal neutrons (0.025 eV). The neutrons that are produced by nuclear reactions, however, or the same cosmic neutrons have energies of the order of MeV, for which the cross section of the active layer of the tube is very low. For this reason it is necessary to slow down neutrons so they can reach the detector with the right energy, or “thermalized”. To achieve this you use the moderator that is a material rich in hydrogen nuclei (HDPE, water, paraffin) in which the neutrons are scattered and then slowed down. The thickness of the moderator varies from 5 cm to 10 cm, if it is too thick the neutrons are absorbed internally and do not reach the detector, if it is too thin neutrons come with too high energy to be detected. The image presented below, taken from the work of Bob Higgins, illustrates this concept. 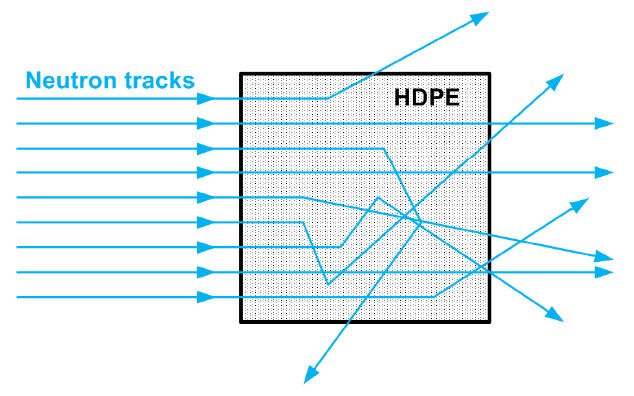 In the following images we show the detector, which comprises the tube (inserted in a wooden support and topped by HDPE sheets), the HV generator (EMCO model), the supply and pulse extraction circuit.

The circuit is simply composed of a small RC filter in order to reduce the ripple in the HV ripple, of a 100 MΩ biasing resistor placed in series with the tube and of the coupling capacitor to exctract the signal pulse.
The HV generator is the F30CT model from EMCO firm, which can provide up to 3000 V, in our setup we set it at 7.5 V, in correspondence of which provides approximately 2400 V which is the normal working voltage for the SI19N tube. 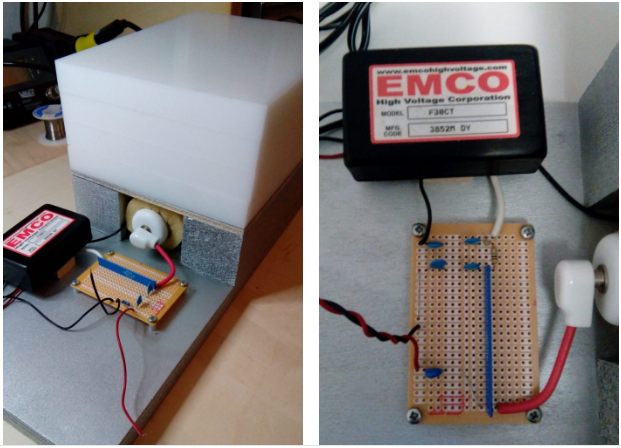 The following image shows the detector connected to the amplifier – shaper – comparator for the processing of the pulse produced from the corona tube. The pulses produced by the comparator are sent to the Theremino Master which does the counting. The equipment amplifier – shaper – comparator has been described in the following post : PMT Pulse Processing (ITA) and in this pdf : PMT Pulse Processing

In the following images are shown registered pulses from the neutron detector. The first pulse has been acquired on a load resistor of 1 KΩ, directly downstream of the coupling capacitor. It is evident that the signal amplitude is rather small: about 50 mV, with a duration of about 500 nsec. It is thus a very short pulse and of limited amplitude, however well distinguishable with respect to the undulation of the base line. 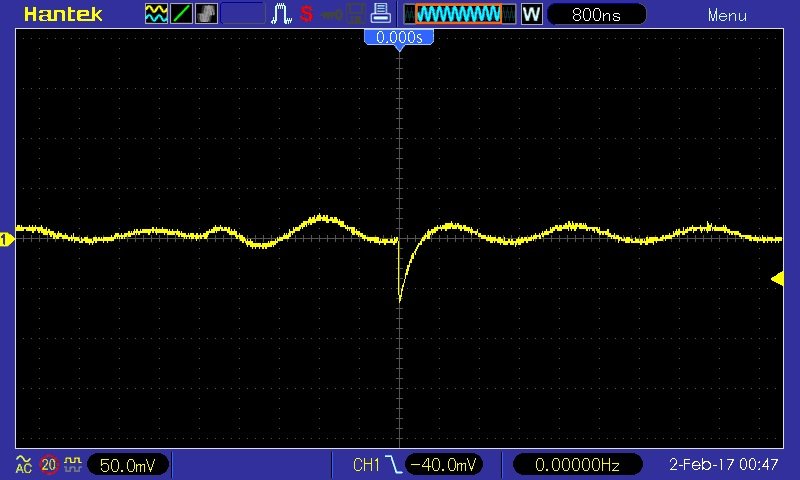 The second pulse has been acquired by the amplifier chain + shaper. To optimize the detection of the pulses we have in fact used the same apparatus used for the PMT pulse processing. The result is an amplified pulse of about 1 V amplitude and duration of 80 μsec. The amplifier allows to improve the S / N ratio and therefore contributes to the recognition of the pulses with respect to background noise. The increased pulse width facilitates the digital capture.

The following image shows both the amplified impulse and the pulse produced by the threshold comparator. The comparator threshold was set at 0.8 V so as to exclude spurious pulses of smaller amplitude. 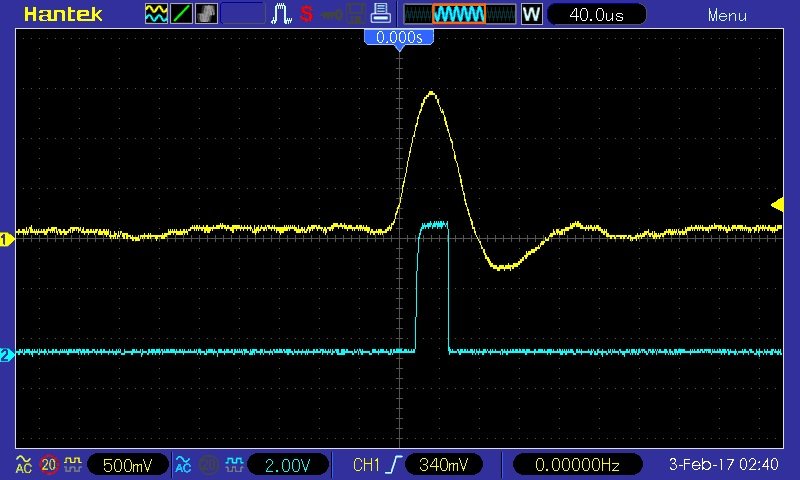 The squared pulses produced by the threshold comparator can be easily counted. We have used a Theremino Master with the application Theremino Geiger. The counts were made in three distinct situations:

The images below show the three counts, the duration of the measurement was, in all three cases, of about 1 h. 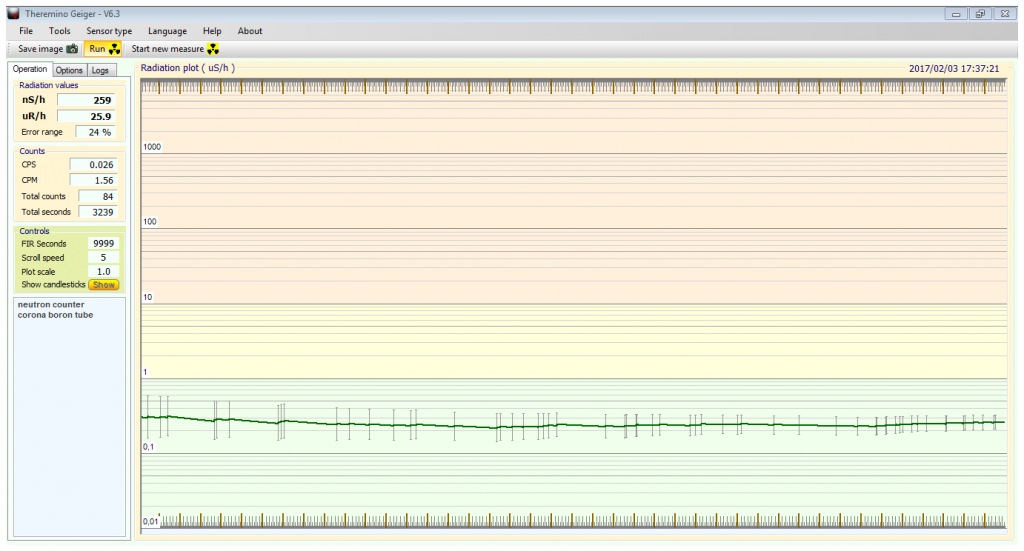 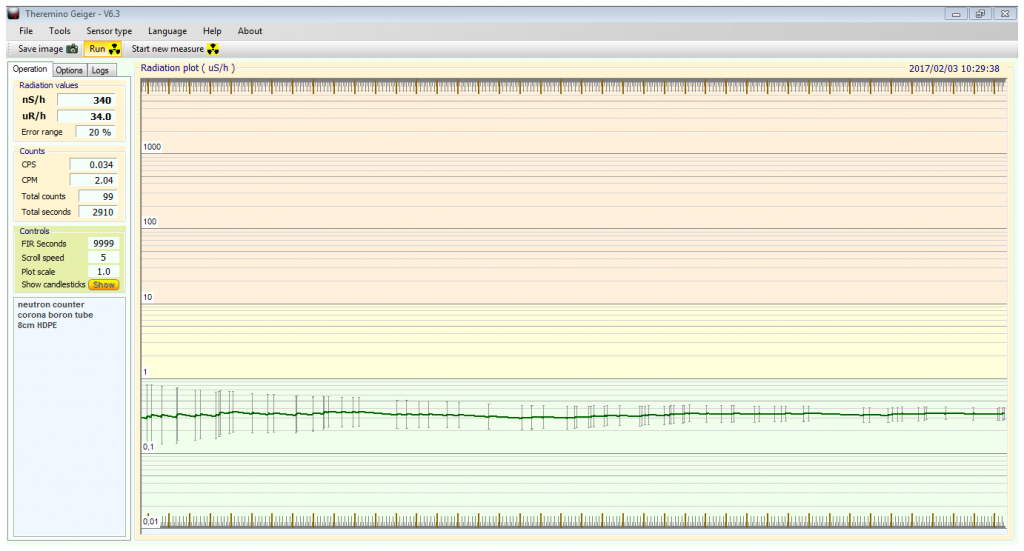 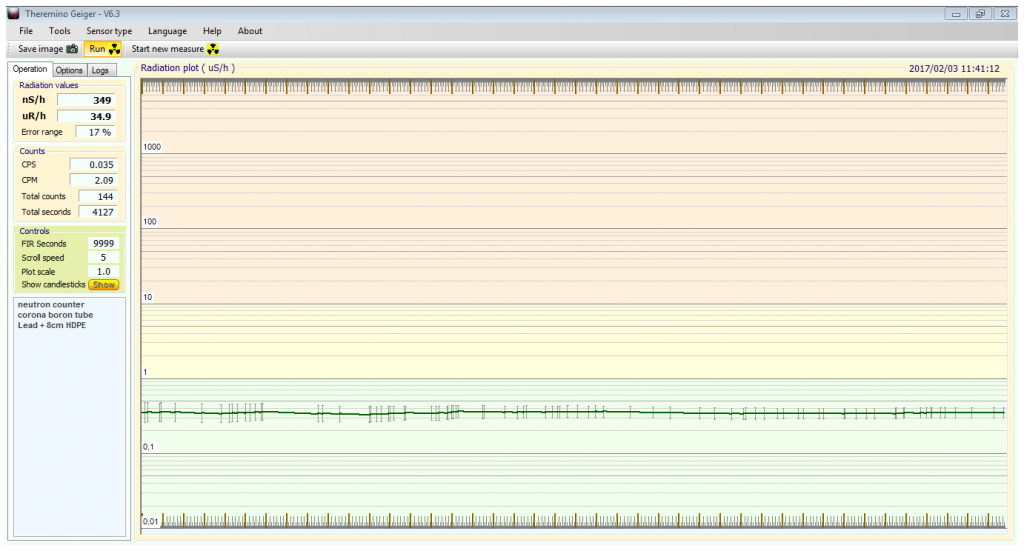 the results are as follows :

From datasheet of SI19N tube we know that the background level should be less than 5 CPM. Our measure without moderator gives a value of 1,56 CPM therefore we can assume that this the background level of our SI19N tube. This value should include spurious pulses and the environmental radiation component. With the moderator above the tube we obtain instead a value slightly greater : 2,04 CPM, this value should include, with the background level, also the contribution of cosmic neutrons slowed down by the moderator. Therefore for this portion we obtain the value of 0,5 CPM.
The third measurement was made by inserting a layer of about 2 cm of lead between two layers of HDPE. The idea is that the lead reacting with cosmic muons should in turn produce neutrons, then going to increment the count of the detector. The result obtained, however, is practically equal to that which is obtained without the lead.

To properly evaluate the functioning and the detector sensitivity it would obviously need to have an adequate source of neutrons … next project !