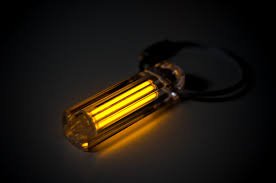 Tritium, (symbol T, 3H or H-3 also known as hydrogen-3) is a radioactive isotope of hydrogen. The nucleus of tritium (sometimes called a triton) contains one proton and two neutrons, whereas the nucleus of protium (by far the most abundant hydrogen isotope) contains one proton and no neutrons. Naturally occurring tritium is extremely rare on Earth, where trace amounts are formed by the interaction of the atmosphere with cosmic rays. The name of this isotope is formed from the Greek word “tritos” meaning “third”.

While tritium has several different experimentally determined values of its half-life, the National Institute of Standards and Technology lists 4,500 ± 8 days (12.32 ± 0.02 years). It decays into helium-3 by beta decay as in this nuclear equation:

and it releases 18.6 keV of energy in the process. The electron’s kinetic energy varies, with an average of 5.7 keV, while the remaining energy is carried off by the nearly undetectable electron antineutrino. Beta particles from tritium can penetrate only about 6.0 mm of air, and they are incapable of passing through the dead outermost layer of human skin. The unusually low energy released in the tritium beta decay makes the decay (along with that of rhenium-187) appropriate for absolute neutrino mass measurements in the laboratory (the most recent experiment being KATRIN). The low energy of tritium’s radiation makes it difficult to detect tritium-labeled compounds except by using liquid scintillation counting. 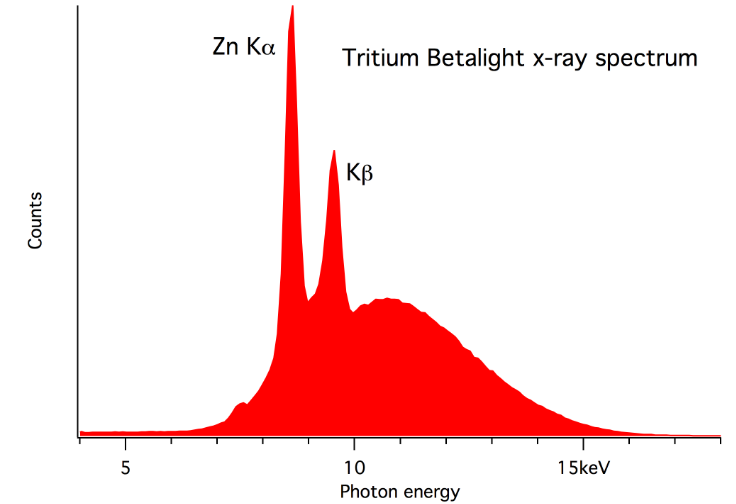 The graph shown below was instead obtained with the system described in the post  DIY Gamma  Spectrometry. The resolution is worse and the peaks are not evident. 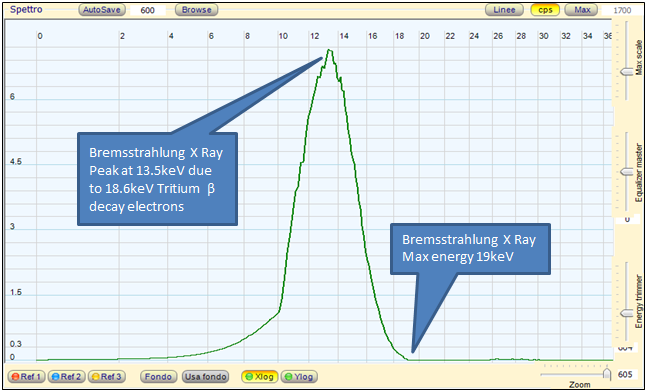