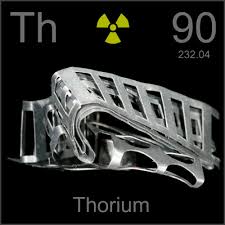 Thorium is a chemical element with symbol Th and atomic number 90. A radioactive actinide metal, thorium is one of only three radioactive elements that still occurs in quantity in nature as a primordial element (the other two being bismuth and uranium).

A thorium atom has 90 protons and therefore 90 electrons, of which four are valence electrons. Thorium metal is silvery and tarnishes black when exposed to air. Thorium is weakly radioactive: all its known isotopes are unstable, with the six naturally occurring ones (thorium-227, 228, 230, 231, 232, and 234) having half-lives between 25.52 hours and 14.05 billion years. Thorium-232, which has 142 neutrons, is the most stable isotope of thorium and accounts for nearly all natural thorium, with the other five natural isotopes occurring only in traces: it decays very slowly through alpha decay to radium-228, starting a decay chain named the thorium series that ends at lead-208. Thorium is estimated to be about three to four times more abundant than uranium in the Earth’s crust, and is chiefly refined from monazite sands as a by-product of extracting rare earth metals.

The 4n chain of Th-232 is commonly called the “thorium series” or “thorium cascade”. Beginning with naturally occurring thorium-232, this series includes the following elements : actinium, bismuth, lead, polonium, radium, and radon. All are present, at least transiently, in any natural thorium-containing sample, whether metal, compound, or mineral. The series terminates with lead-208. The total energy released from thorium-232 to lead-208, including the energy lost to neutrinos, is 42.6 MeV. 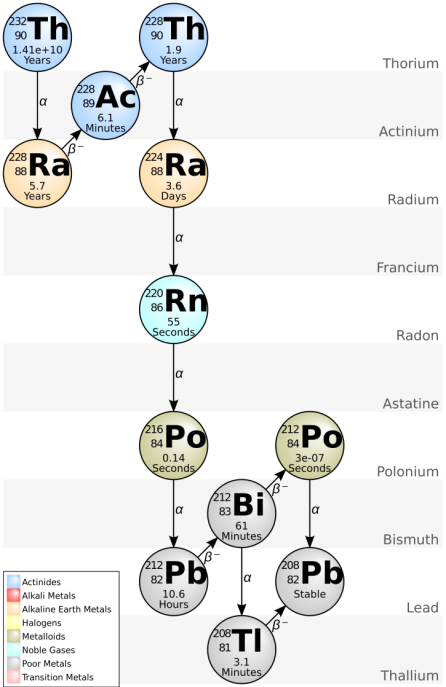 The thorianite is a mineral containing thorium, from which it takes its name. It is found in pegmatites and in alluvial deposits. There are clear peaks corresponding to major descendants of Thorium : Pb212 , Ac228 and Tl208.

Monazite is a reddish phosphate mineral containing rare earth metals. It occurs usually in small isolated crystals. Monazite is an important ore for thorium, lanthanum, and cerium. Monazite is radioactive due to the presence of thorium and, less commonly, uranium. Because of its radioactive nature, monazite is a useful for radiometric dating of geological events, such as crystallization, heating, or deformation of the rocks containing monazite.

Radon-220 (also known as thoron) is a short-lived isotope of radon and originates from thorium present in the earth’s crust. The Rn-220 isotope is a natural decay product of the most stable thorium isotope (Th-232), and is commonly referred to as thoron. It has a half-life of 55.6 seconds and also emits alpha radiation. In the thoron decay chain is evident the isotope Pb-212, with half-life of about 10 hours, this isotope generates the main gamma photo-peak at 239 keV, evident feature of the thorium gamma spectrum, shown in the gamma spectrum of the classic thorium gas mantle. Other isotopes have shorter half-life and photo-peaks less evident, the main other isotopes which are present in the gamma spectrum are : Tl-208 and Bi-212. Isotope Ac-228 comes directly from thorium and thus, in the decay chain, it is generated before thoron. 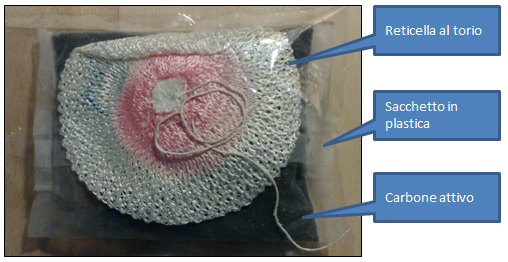 To make the measurement of the decay of the thoron we inserted in a plastic bag, a thorium gas mantle together with a bag of charcoal, the bag was placed in a warm place for about 24 hours. During this time period the thoron has leaked from the mantle, also thanks to the heat, and has been absorbed by the charcoal filter. The process of decay of thoron was then also occurred inside the charcoal, producing his isotopes. Finally the charcoal filter was extracted from the bag and was made the measurement of its gamma spectrum.
As expected we see the main peak of Pb-212, while others photopeaks are virtually absent. After a suitable period of time, about 10 hours, the peak of the Pb-212 has been much reduced, due to its decay. 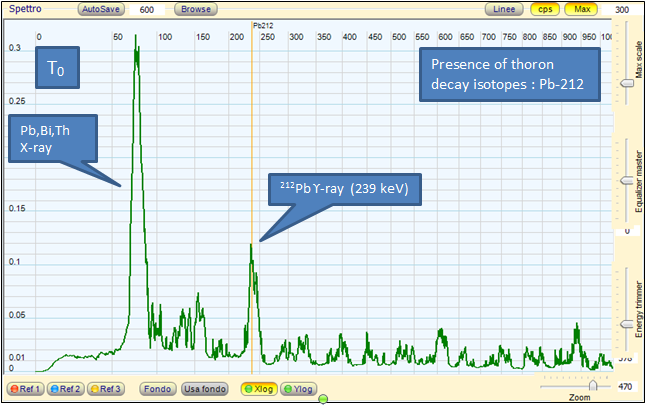