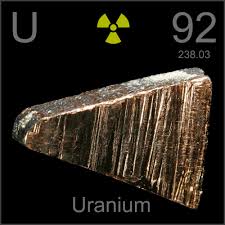 Uranium is a chemical element with symbol U and atomic number 92. It is a silvery-white metal in the actinide series of the periodic table. A uranium atom has 92 protons and 92 electrons, of which 6 are valence electrons. Uranium is weakly radioactive because all its isotopes are unstable (with half-lives of the 6 naturally known isotopes, uranium-233 to uranium-238, varying between 69 years and 4.5 billion years).

The most common isotopes of uranium are uranium-238 (which has 146 neutrons and accounts for almost 99.3% of the uranium found in nature) and uranium-235 (which has 143 neutrons, accounting for 0.7% of the element found naturally). Uranium has the second highest atomic weight of the primordially occurring elements, lighter only than plutonium. Its density is about 70% higher than that of lead, but slightly lower than that of gold or tungsten. It occurs naturally in low concentrations of a few parts per million in soil, rock and water, and is commercially extracted from uranium-bearing minerals such as uraninite.

Uranium-238 is the most stable isotope of uranium, with a half-life of about 4.468 × 109 years, roughly the age of the Earth. Uranium-235 has a half-life of about 7.13 × 108 years, and uranium-234 has a half-life of about 2.48 × 105 years. For natural uranium, about 49% of its alpha rays are emitted by each of 238U atom, and also 49% by 234U (since the latter is formed from the former) and about 2.0% of them by the 235U. When the Earth was young, probably about one-fifth of its uranium was uranium-235, but the percentage of 234U was probably much lower than this. Uranium-238 is usually an α emitter (occasionally, it undergoes spontaneous fission), decaying through the “Uranium Series” of nuclear decay, which has 18 members, all of which eventually decay into lead-206, by a variety of different decay paths.

Uranium-238 is not fissile, but is a fertile isotope, because after neutron activation it can produce plutonium-239, another fissile isotope. Indeed, the 238U nucleus can absorb one neutron to produce the radioactive isotope uranium-239. 239U decays by beta emission to neptunium-239, also a beta-emitter, that decays in its turn, within a few days into plutonium-239. 239Pu was used as fissile material in the first atomic bomb detonated in the “Trinity test” on 15 July 1945 in New Mexico. 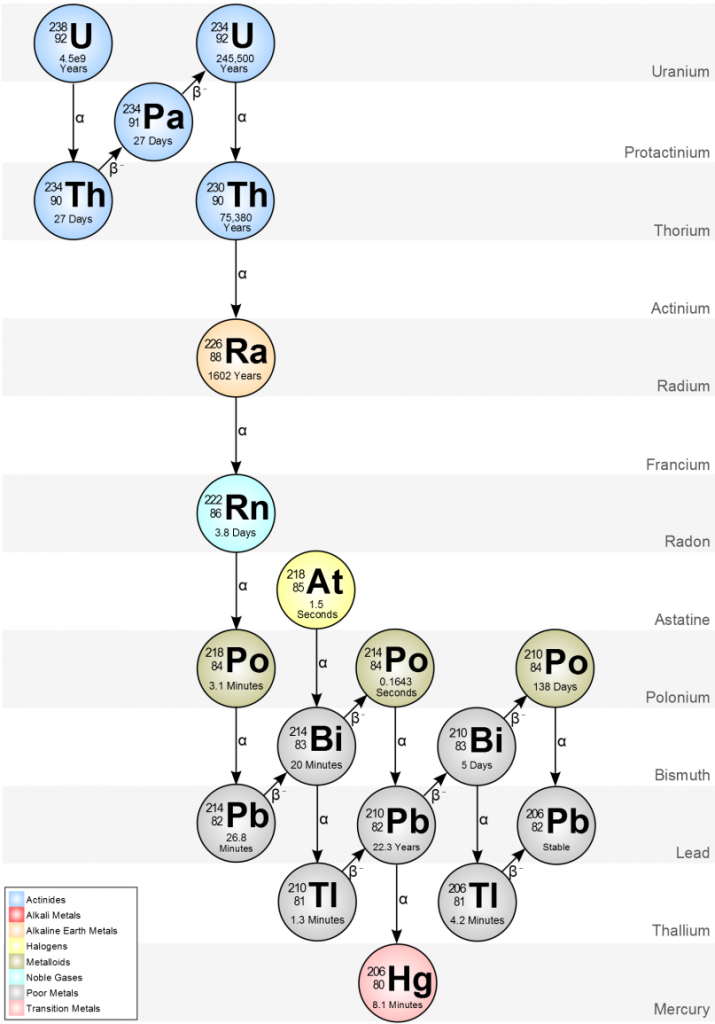 The 4n+2 chain of U-238 is called the “uranium series” or “uranium cascade”.
Beginning with naturally occurring uranium-238, this series includes the following elements: astatine, bismuth, lead, polonium, protactinium, radium, radon, thallium, and thorium. All are present, at least transiently, in any natural uranium-containing sample, whether metal, compound, or mineral. The series terminates with lead-206.
The total energy released from Uranium-238 to Lead-206, including the energy lost to neutrinos, is 51.7 MeV.

Uranium-235 is an isotope of uranium making up about 0.72% of natural uranium. Unlike the predominant isotope uranium-238, it is fissile, i.e., it can sustain a fission chain reaction. It is the only fissile isotope that is a primordial nuclide or found in significant quantity in nature. The decay series of 235U, which is called the actinium series has 15 members, all of which eventually decay into lead-207. The constant rates of decay in these decay series makes the comparison of the ratios of parent to daughter elements useful in radiometric dating. 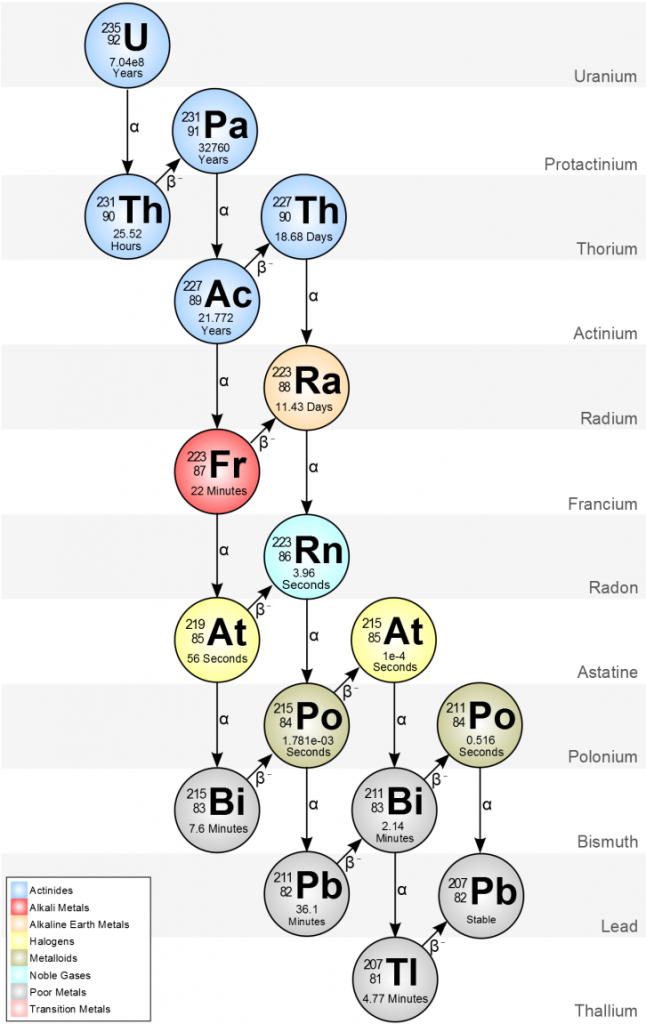 The 4n+3 chain of Uranium-235 is commonly called the “actinium series” or “plutonium cascade”. Beginning with the naturally-occurring isotope U-235, this decay series includes the following elements :  Actinium,  astatine,  bismuth,  francium,  lead,  polonium,  protactinium, radium, radon, thallium, and thorium. All are present, at least transiently, in any sample containing uranium-235, whether metal, compound, ore, or mineral. This series terminates with the stable isotope lead-207.

The uranium contained in the glaze and in the glass has been refined, so it does not contains all the products of the decay : from radio to the lead and bismuth. For this reason there is only the first isotope of the decay: thorium-234.
It should be noted in the spectra of the glaze the presence of isotope uranium-235. These photo peaks are sign that for these artifacts were used refined natural uranium and not depleted uranium. We can therefore deduce that the manufacturing period is probably before the Second World War because subsequently, for this kind of products, predominantly depleted uranium has been used.

Autunite (hydrated calcium uranyl phosphate) with formula: Ca(UO2)2(PO4)2·10-12H2O. Is a yellow – greenish fluorescent mineral with a hardness of 2 – 2½. Autunite crystallizes in the orthorhombic system and often occurs as tabular square crystals. Due to the moderate uranium content of 48.27% it is radioactive and also used as uranium ore. If the mineral dries out, it converts to meta-autunite-I, which can turn into meta-autunite-II after heating. These two subsequent minerals are very rare in nature. For scientific studies it is recommended to store the mineral in a sealed container to minimize the water loss. Museums are known to have covered the mineral with lacquer to avoid drying of the mineral.
Autunite was discovered in 1852 near Autun, France. It occurs as an oxidation product of uranium minerals in granite pegmatites and hydrothermal deposits. Associate minerals include metaautunite, torbernite, phosphuranylite, saleeite, uranophane and sabugalite. 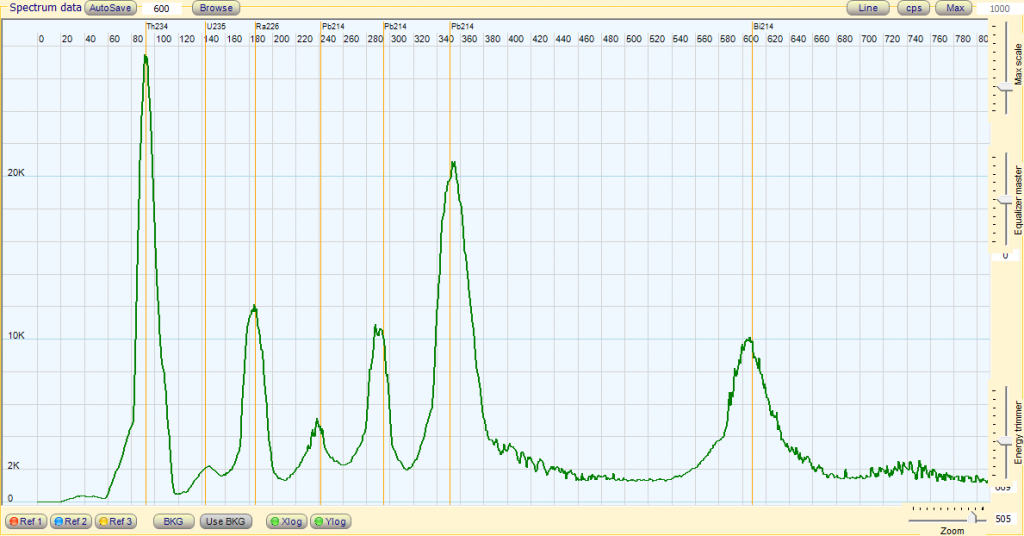 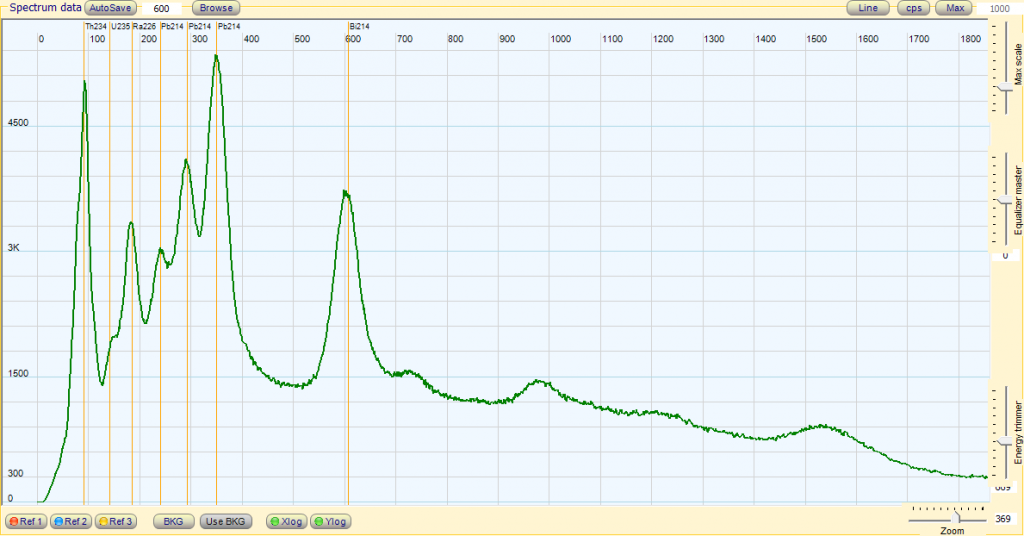 Uraninite is a radioactive, uranium-rich mineral and ore with a chemical composition that is largely UO2, but due to oxidation the mineral typically contains variable proportions of U3O8. Additionally, due to radioactive decay, the ore also contains oxides of lead and trace amounts of helium. It may also contain thorium, and rare earth elements. It used to be known as pitchblende.
All uraninite minerals contain a small amount of radium as a radioactive decay product of uranium. Uraninite also always contains small amounts of the lead isotopes 206Pb and 207Pb, the end products of the decay series of the uranium isotopes 238U and 235U respectively.

We acquired the gamma spectrum of a beautiful specimen of pitchblende from Val Vedello. The ore is rather large so it was not possible to put it in the shielded measuring well. The sample is still quite active for which the environmental level does not significantly alter the measurement. In the images below you can see the sample, the measurement setup and the obtained gamma spectra. 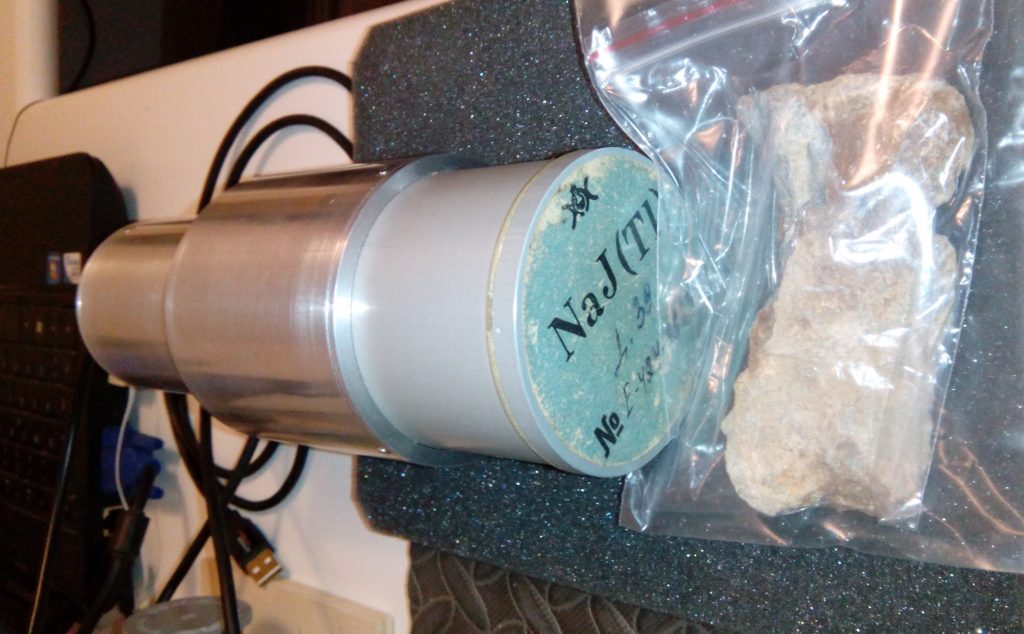 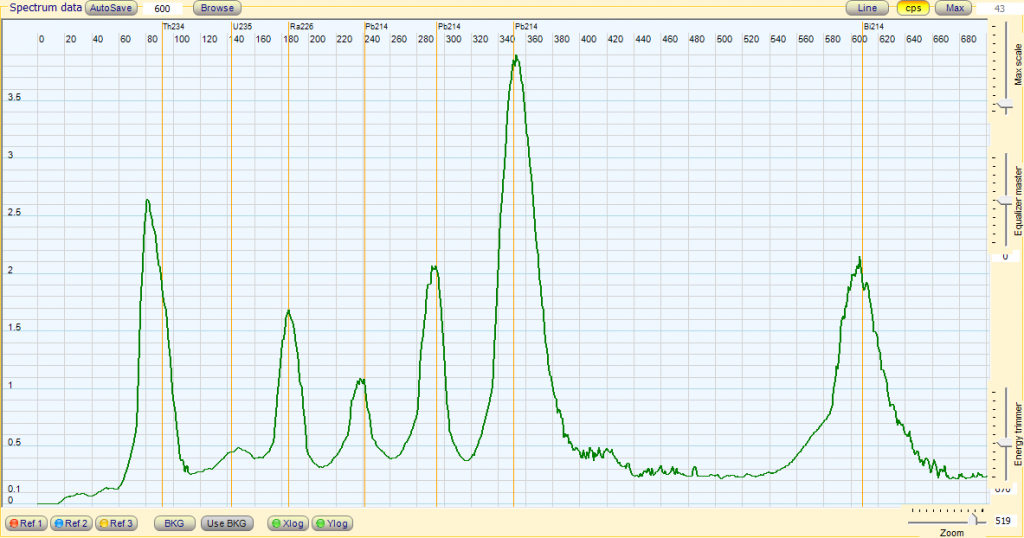 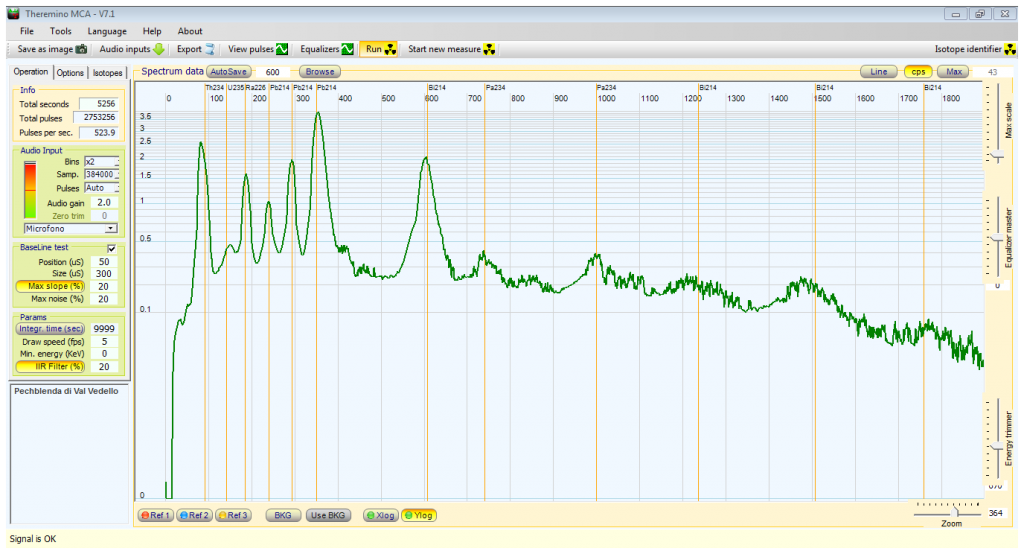 Saleeite is a secondary uranium mineral occurring in the oxidized zones of uranium deposits, or as disseminations in carnotite-bearing sandstones. Its chemical formula is Mg(UO2)2(PO4)2·10(H2O). 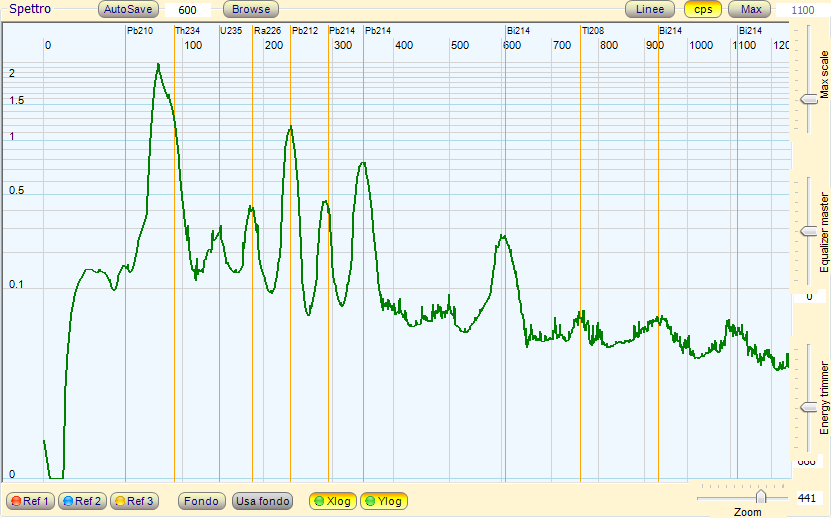 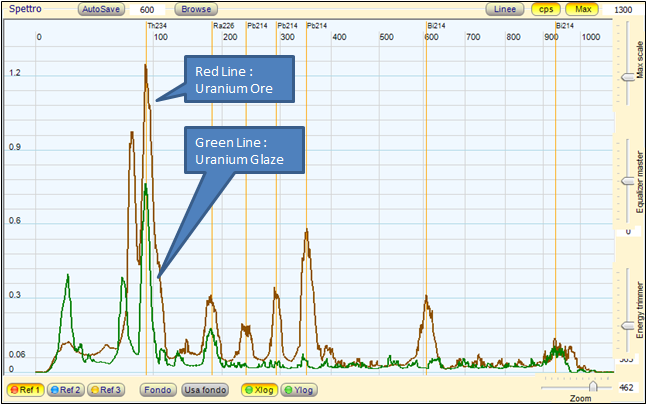 The decay of uranium-238 could be divided in two parts :

In uranium ores all the decay chain isotopes are present because, during time, an equilibrium has been achieved, thus the activity is the same for all the isotopes. In “modern” objects built with refined uranium the isotopes which comes from radium are absent because they had not enough time to be generated, particularly the following isotopes are absent : Ra-226, Pb-214 e Bi-214. This feature is evident in the spectra shown in the image above.