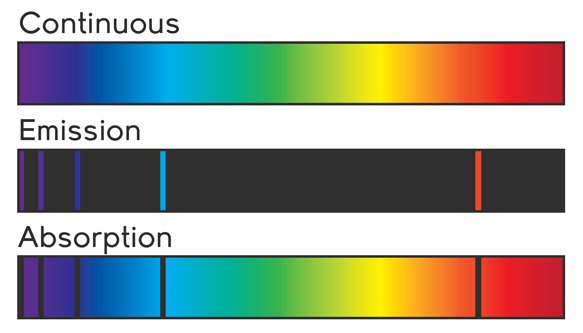 The emission spectrum of a chemical element or a chemical compound is the set of frequencies of the electromagnetic radiation emitted by the electrons of its atoms when they perform a transition from one state to a higher energy towards a lower energy .
For each transition between states, the energy of the emitted photon is equal to the energy difference of the two states according to the equation :

which correlates the energy of the transition with the frequency of the photon of light emitted (h is Planck’s constant) . Since in each element or chemical compound there are many possible transitions, the set of photons of different frequencies emitted by the element or by the molecule is its the spectrum .

The discrete spectra and band spectra are emitted by gas and vapor at low pressure. The first are due to isolated atoms, the second to diatomic molecules. The spectra are characteristic of the elements that emit them.

With the grating spectrometer described in one of previous posts we have examined a number of light sources with the aim of highlighting the emission and absorption lines of some chemical elements. In particular, we have used spectral lamps. These are constituted by a glass tube, inside which there is a low pressure gas (hydrogen, nitrogen, carbon dioxide), when a voltage of 3000-5000 V is applied to the two electrodes   a discharge of ionized gas is formed that emits light in correspondence to the characteristics emission lines of the gas contained in the tube.

Hydrogen is the simplest atom consisting of only one proton and one electron. Even his spectrum is the easiest to explain. In the hydrogen atom, the quantum leaps of an electron between the orbitals are described by the equation Rydberg :

with ni > nf represent the initial and the final energy levels, me and e respectively the mass and the charge of the electron, c is the speed of light, h Planck’s constant and ε the dielectric constant. In the spectrum of hydrogen this equation realizes perfectly the presence of some series of lines, called Lyman, Balmer and Paschen. The Balmer series is the only which fall in the visible, and corresponds to the transition from the energy levels greater than level 2; the most important line of this series is called Hα, its wavelength is approximately 6563 Å, which corresponds to red light, and is given by the electron transition between levels 3 and 2. 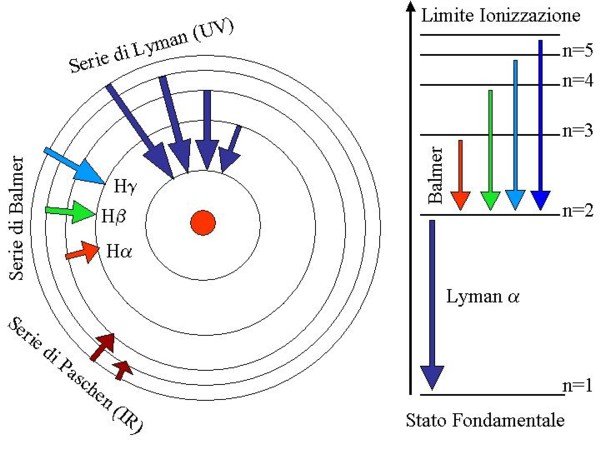 The picture below shows the spectrum of hydrogen captured by our spectrometer. It is a low pressure hydrogen spectral lamp with high voltage and high frequency power supply. The main hydrogen emission lines Ha at 656nm and Hb at 486nm are evident.

The hydrogen spectrum was perfectly explained by Bohr’s theoretical model, in which quantization of the angular momentum of orbiting electrons was introduced. It is postulated that the angular momentum is a whole multiple of the planck constant: n(h/2π), where n is the main quantum number. Bohr’s model explains well the spectrum of hydrogen, but fails to explain the spectra of other elements. This is because the model is too simplified and does not take into account all quanto-mechanical effects. 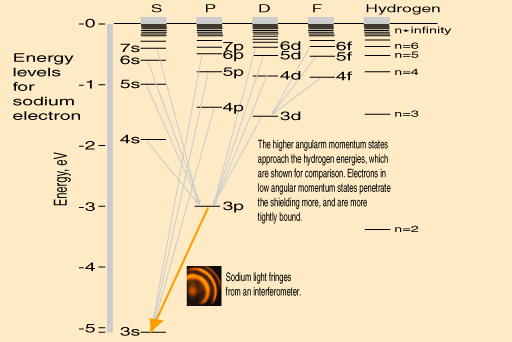 The sodium atom is similar to the hydrogen atom because the sodium atom has only one valence electron in the orbit 3s and all the other lower orbits are occupied (figure to the side), but the spectrum is different, in particular there is the phenomenon of the splitting of some spectral lines, a phenomenon known as a fine structure. Fine structure, in spectroscopy, the splitting of the main spectral lines of an atom into two or more components, each representing a slightly different wavelength. Fine structure is produced when an atom emits light in making the transition from one energy state to another. The split lines, which are called the fine structure of the main lines, arise from the interaction of the orbital motion of an electron with the quantum mechanical “spin” of that electron. An electron can be thought of as an electrically charged spinning top, and hence it behaves as a tiny bar magnet. The spinning electron interacts with the magnetic field produced by the electron’s rotation about the atomic nucleus to generate the fine structure. 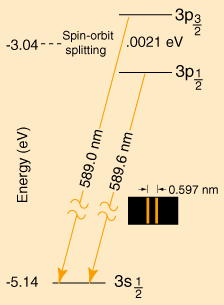 The amount of splitting is characterized by a dimensionless constant called the fine-structure constant. This constant is given by the equation α = ke2/hc, where k is Coulomb’s constant, e is the charge of the electron, h is Planck’s constant, and c is the speed of light. The value of the constant α is 7.29735254 × 10−3, which is nearly equal to 1/137.

The image to the side shows the detail of the splitting of spectral lines.

In the atoms of alkali metals such as sodium and potassium, there are two components of fine structure (called doublets), while in atoms of alkaline earths there are three components (triplets). This arises because the atoms of alkali metals have only one electron outside a closed core, or shell, of electrons, while the atoms of alkaline earths have two such electrons. Doublet separation for corresponding lines increases with atomic number; thus, with lithium (atomic number 3), a doublet may not be resolved by an ordinary spectroscope, whereas with rubidium (atomic number 37), a doublet may be widely separated.
The images below show the emission / absorption spectra of sodium. In the first spectrum of HV plasma with sodium chloride is evident the doublet sodium line at 589nm. The second spectrum shows the detail of the absorption line in a sodium-vapor lamp. The third image is the spectrum of potassium chlorate match with evidence, in near infrared, of potassium doublet at 770nm.

An analysis of the spectrum of mercury is similar to that of the spectrum of sodium. An electrically neutral mercury atom has five complete shells and two valence electrons. Although figuring out the quantum numbers for two electrons is more-work than it is for one electron, the procedures are about the same. The energy levels for mercury are shown in the bottom illustration. As before, the state for an unexcited atom is shown at the bottom left. Some of the possible excited states are shown higher in the chart. Mercury atoms in a lamp are constantly being excited to those upper levels and then finding their way back to ground state by emitting light. 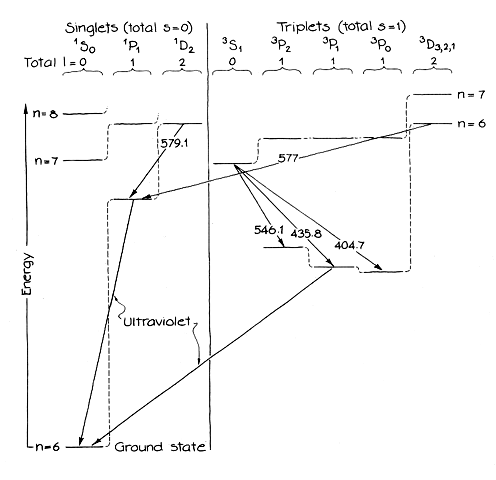 The major difference in analyzing the energy levels for mercury is that it is necessary to focus on the total l and the total s for the valence electrons. The totals are combined to find the total j, which determines the energy. To aid in such calculations the energy chart is divided into two sections labeled singlets and triplets. Under the singlet label are the energy levels for cases where the two electrons have their spins in opposite directions and so have a total s of 0. The total j for any of these levels is simply the value of the total l. For example, the lowest level under the label P in this section is for the case where one electron has an l of o and the other has an l of 1. The total l is 1. Since the total s is 0, the total j is also 1. In the triplet section the left side under the label S is also easy. Here the total l is o and the electrons have their spins in the same direction to give a total s of 1. Hence the total j can only be 1.

The fun begins in the other part of the triplet section. I shall concentrate on the lowest levels under the label P in that section. There the total l is 1 but the total j can have three possible values, each associated with a different energy. The sum of total l and total s gives a value for total j of 2. A subtraction gives a total j of 0. An intermediate value for total j is 1. The energies associated with those three values are shown in the energy chart.

Three of the wavelengths in the mercury spectrum depend on these three energy levels. Consider a mercury atom excited by a collision to the lowest S1 level. It can deexcite by dropping to a P level in the same section of the chart. (As with the sodium chart the deexcitation route must be downward and into another column.) Since there are three choices of P levels, the atom can emit light at either 546.1, 435.8 or 404.7 nanometers. With a great many atoms being excited in the lamp some are always dropping out of the Sl along the three routes, giving continuous emissions at the three wavelengths. Thus the presence of this triplet of wavelengths in the mercury spectrum can be understood only with the quantum number j.

In the picture below there is the spectrum of low pressure nitrogen spectral lamp with high voltage high frequency power supply. The main nitrogen emission lines and bands are evident. The spectrum of nitrogen is interesting because it is the main component of the atmosphere.

In the picture below there is the spectrum of low pressure carbon dioxide spectral lamp with high voltage high frequency power supply. The main interest on Carbon Dioxide is in the infrared region because of green-house effect. Unfortunately we do not have any equipment to make measurements in the infrared region, but only in the visible wavelengths. In this region there some peaks, shown in the spectrum below, which could be related to carbon and to oxygen.

Pdf document with the complete description of the spectroscopy experiments: SpettroscopiaAtomica_ENG 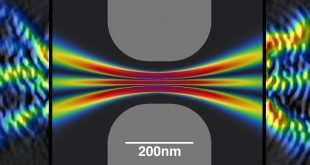